Tomorrow Corporation, them folks behind Little Inferno and the upcoming 7 Billion Humans, and whose staff have the likes of World of Goo, assorted EA things and Henry Hatsworth on their storied CVs, are at it again. 'It' tends to mean playfully exploring the outer boundaries of what makes a game a game, but apparently their upcoming Welcome To The Information Superhighway "is shaping up to be one of the more game-like games we’ve made." It's also, it would seem, shaping up to be a road trip though a vibrant interpretation of the best and worst of the internet.

Though there's not much to go on - a set of concept art in the distinctive Tomorrow Corporation / 2D Boy style and an oblique summary - I get a slight Black Mirror vibe from stuff like roadside statues of blank-eyed, slack-jawed giants taking selfies, with captions that imply a bit of 21st century Ozymandias. 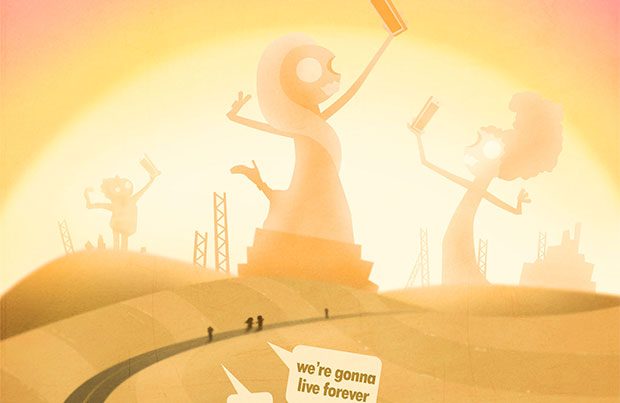 'Course, Black Mirrorish observations can get a little gauche - oooh imagine, like, an even more insidious version of technology you use today! - but I have faith that these guys will sufficiently shroud their barbs in playfulness and whimsy. And heck, giant blue data-cat is alright by me, as is the loose description of Superhighway as a 'road trip adventure.' I want to cruise the world wide web realised as rainbow-bright pastel and neon, rather than the usual Tron aesthetic.

Say Tomorrow Corp in their announcement:

"This is shaping up to be one of the more game-like games we’ve made. We’ve got a long way to go on a long crooked road, but thought we'd update here as we discover more about it.

"What is this internet highway all the kids are faxing about these days? Can I go on an incredible road trip and make lots of broken new friends along the way? Isn't Tomorrow Corporation made of three grumpy old people who don't know how to use social media? Yes!"

The art suggests this will be walked rather than driven road, full of fellow travellers to meet, and there are a few sideways references to this being a late-80s/early-90s vision of the internet, but other than that, your guess is as good as mine.

The longer-memoried reader may recall that a similar name was used for a World of Goo level, and obviously the art evokes that game a little too, but the devs claim in comments on their blog that "the two games are unrelated."

Looking forwards to hearing more, and in the meantime we should get to play the people-as-processes puzzler 7 Billion Humans, follow-up to the earlier Human Resource Machine at some point in the near future. They note they are "wrapping up" that game while working on Superhighway, though still no release date yet.

No release date for Superhighway either, but it's well worth a look at all the lovely released artwork here.