Far Cry 5 is a mixed bag, but one of the bigger, shinier objects in that bag is its companions system. It's a crossbreed of Far Cry Primal's pets - you can summon them and direct their attacks at will; and Far Cry 2's buddies - they can revive you if you get taken down. Nine of the companions available are starring characters: people or creatures you meet and recruit through main story missions with backstories and (when human) dialogue. But I don't really care about eight of those, and I only care about the ninth because he is a dog, which gives him three key advantages:

1. He is, again, a dog.
2. He never alerts enemies if I'm being stealthy.
3. He never speaks, a big plus in a world where almost everything anyone says makes you like them less.

Incredibly, though, Far Cry 5's companion system includes something more compelling than a dog. Because the same system extends to most of the locals you meet: you can recruit them, order them around, and save or be saved by them. They're kinda generic, they do speak, and they can break your stealth. But wait! There's an upside! They also have no useful abilities. Yet.

The reason I love these generated nobodies is that they can level up. After six cultist kills - the standard unit of knowledge in this universe - they unlock a random perk. Some will re-loot bodies you've looted to find you stuff you missed. Others frighten enemies with their shots. I had a shotgun guy whose buckshot would occasionally ignite the scenery, causing understandable panic. 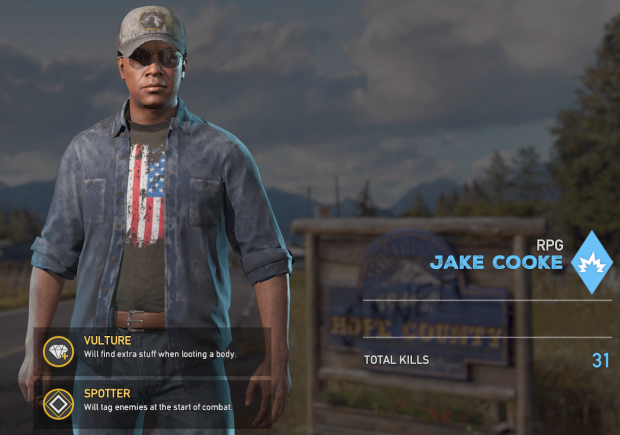 And after another six learning murders, they get another perk! My RPG guy can revive dogs! Sniper lady lets me carry more ammo! Hunter man prevents me from being tracked through long grass! That one is not useful in itself - he still sucks at stealth - but it helped because I didn't know enemies could track me through long grass in the first place. Thanks for the heads up, genero-friend!

Then that's it. Two perks and they're done. And, if I'm honest, even the best ones don't really make them as good as a dog. It's not the end result of the level-up process I enjoy, it's the process itself. Once my new friend has shot enough humans to understand how to heal a dog and help a friend carry more spades, I release them from my employ and let them find their own way in the world. They have self-actualised, reached the spade-carrying potential that was within them all along, and they have no further need of my training. So I find someone new, someone with no skills at all, and take them under my wing.

This column is called What Works And Why, and in a lot of ways, Far Cry 5's generated companions don't work: they're ghettoised by the game's focus on story companions, they're incomptible with the stealth playstyle that the game is best at, and the reward for levelling them up is often no help at all. It might also be the only level-up system I've seen in a mainstream game where there is no fanfare for the level-up moment itself - I don't mean not enough, I mean you are literally not told. You have to periodically bring up the companions menu to see if it's happened yet.

And yet... it does work. I love doing it, and I never get tired of it. And this is an eye-opener for me. I'm basically grinding, and I'm not even grinding for my own benefit. I'm farming experience-kills for people who have no significance, no pre-existing relationship to me, and virtually no future usefulness. And it feels... lovely.

I think part of it is that I'm an obscene super-predator in this world. I'm absurdly tough, perfectly accurate, and my dog is psychic. No military operative in human history has had the capability to personally kill this many people with a bow, a rock and a spade. I enjoy taking down all the outposts undetected, but if I'm honest I'm doing it for sport. I'm trying to kill them without being seen just because it's harder, and thematically cooler. It doesn't actually matter if they see me, no-one's coming to save them. I broke all the alarms and mined all the reinforcement routes, and I can kill anyone in this world with a mouse click. That kind of power can start to feel a little gross.

So taking some frankly incompetent rebels out on a little field trip, purely for the purpose of helping them improve, feels genuinely nice. Those six educational kills they need, I'll level with you: they're not getting them by helping me out. They suck. I have to hang back, hide in a bush, spot targets for them with my binoculars, and tell them when to strike. I watch them work, assign each of them targets suited to their abilities, and if they screw it up and blow themselves up, I finish the job and save them before they bleed out. Then I bring up the menu to check their kills, see if they've learned anything yet, and when they've learned all they can - which it turns out is two things - I let them go.

Open world games are the perfect place for this. Walking across a richly built one these days is almost, almost fun enough. Stuff happens! Fights emerge! Animals attack! Events chain together! It's all technically stuff to do. But by itself, it's a little too aimless. The game's story missions are meant to address that, but for years and years, developer after developer have stubbed their toes on the obstacles inherent in trying to write a movie script for a protagonist who's been told they're free. It's never a great fit.

But helping others, even in this rudimentary, unincentivised way, makes that trek rewarding for me. Imagine if it actually helped, if these people you mentored became recurring characters, if the talents you'd helped them develop contributed to your war effort, or if the game in any way acknowledged you'd even done it. Better still, imagine if they were dogs.