World Of Warcraft’s “Corrupted Blood incident” swept through the game over a decade ago. A debuff inflicted by an end boss, Hakkar The Soulflayer, wasn’t supposed to leave the raid area, but was accidentally carried by pets throughout Azeroth, causing a pandemic and ensuing panic that emptied out towns, killed low-level characters, and was eventually studied by epidemiologists to see how people might react to a plague in the real world.

Blizzard’s spin-off card game, Hearthstone, cheerily added a tribute to the event in the form of adding Hakkar himself as a legendary card. When killed, he adds a new card to both players’ decks, Corrupted Blood. When drawn, it deals three damage and shuffles two new Corrupted Bloods back in, which can snowball quickly. Still, it was a novelty addition that’s not been seriously played – except, in recent competitions, by accident.

Hearthstone’s latest foray into esports is the Grandmasters competition, and one of the most popular decks is the ‘Cyclone Mage.’ It centres on a card called Conjurer’s Calling, which destroys a minion and summons two of the same mana cost to replace it. It’s typically used to target Giants, cards which have a high mana cost that can be reduced depending on the game's state. Sea Giants, for example, cost 10, but go down by one for each other minion on the board. Conjurer’s Calling, however, takes the original cost, and so will summon two 10-cost minions no matter how much the card was played for.

The idea of the deck is to get those high-cost minions much earlier and more cheaply than you’d otherwise be able to. But it has some side effects. Specifically, since you don’t know what minion you’ll randomly generate, things can get weird. Like, say, accidentally bringing in Hakkar and infecting both your and your opponent’s decks.

This has happened a couple of times, but most tense was the game between Jang “Dawn” Hyunjae and Tyler “Tyler” Hoang Nguyen. Dawn was playing the Cyclone Mage, with Tyler playing a Bomb Warrior, which, like Hakkar, is focused on shuffling cards into your opponent's deck that damage them when drawn. (In this case, unsurprisingly, they’re bombs.) 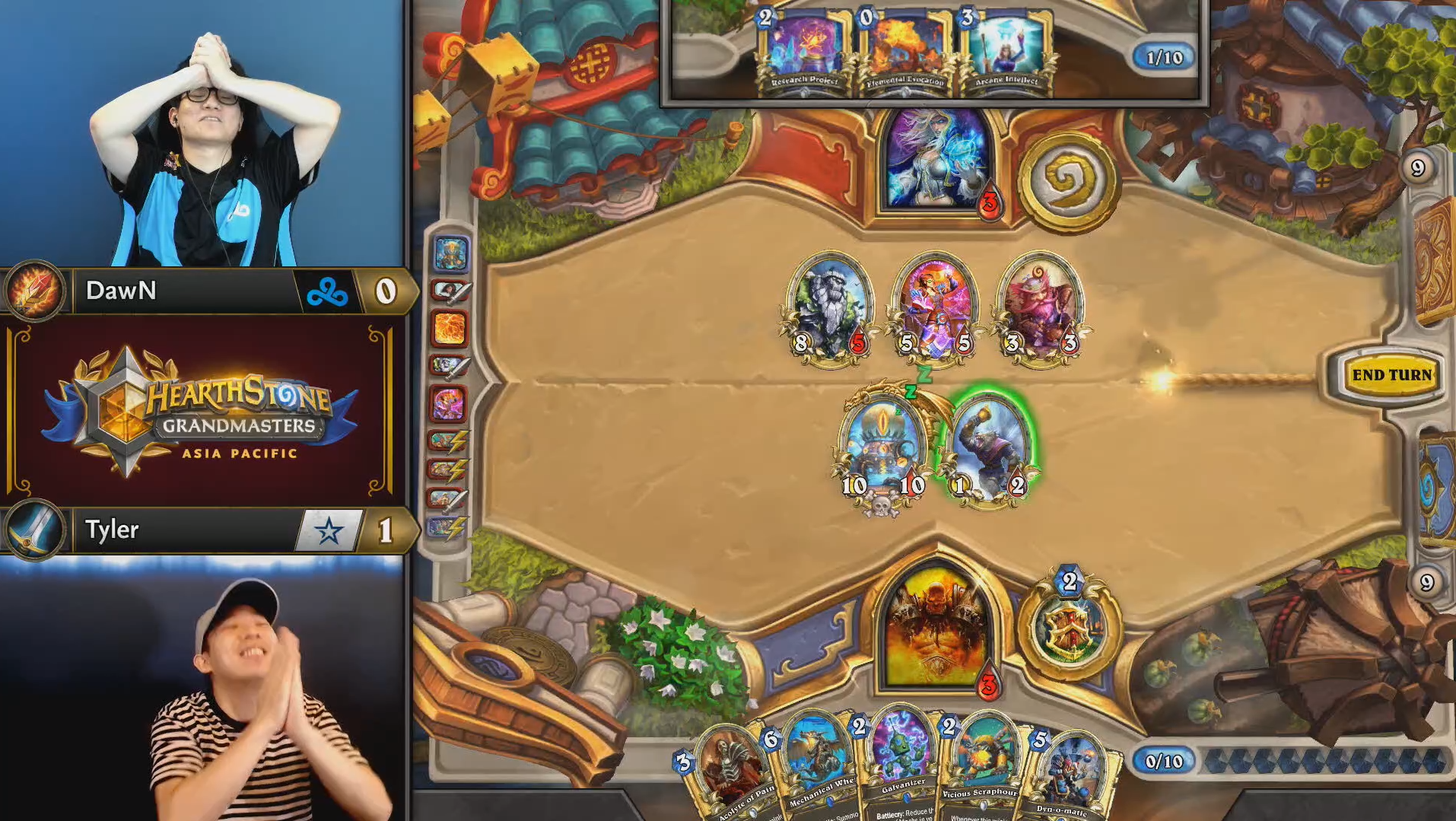 0-1 down in a best of three, Dawn ended up casting Conjurer’s Calling on a Sea Giant, summoning Hakkar alongside the dragon Emeriss. Neither lasted long, as Tyler played a Brawl on the next turn, destroying every minion on the board except for one. So began the Corrupted Blood infection in both players’ decks. With less health, less chance to regenerate it, fewer cards in his deck, and the additional concern of bombs, it seemed more of a thorn in Dawn’s side, despite having come from his own play.

The game continued; both players more expressive than most in their player cams, visibly sighing, fretting, and reacting to unexpected outcomes. The casters are critical of Dawn for not drawing more cards, until Tyler draws a Blood. Caster Mihai “Languagehacker” Dragalin is reminded. “The Bloods! I forgot about the Bloods. That makes so much more sense. …Dawn knows there’s Bloods left so he doesn’t necessarily want to draw.”

Despite not wanting to, he is forced to draw at the beginning of his next turn. He picks up a bomb, followed immediately afterwards by a Blood. Both players are on three health, susceptible to a single bad draw, with a two in nine chance of picking up the wrong thing. Tyler hasn’t taken his hands away from his mouth in anxious horror for several minutes. Dawn has a hand in his hair, half-laughing at the predicament. Even if I couldn't see them, I'd be right there with them, but being able to watch their stress play out in real time really makes the drama clear.

Tyler’s turn again. He doesn’t draw a Blood. But he can’t clear Dawn’s minions on board. The only thing he can do is to pass his turn and pray. “This is literally Russian Roulette,” says Alex “Raven” Baguley. Both of them make praying hands, though continue smiling through it, making it bearable to watch.

Here’s a clip of what happened, and I’m gonna talk about it underneath, so if you don’t want to know, go watch it yourself now.

It’s actually amusingly anticlimactic – the players’ reactions are a couple of seconds ahead of seeing the card draw, and Languagehacker very casually says. “Oh, we’re going to game three.” But Dawn’s breathless, giggling celebrating, interrupted briefly as he actually remembers to deal lethal damage, and Tyler’s good-natured reaction to the whole thing are lovely.

RNG is often maligned in Hearthstone, since it means that no matter how well someone plays, they can win or lose based on luck alone. But Dawn’s careful choices to avoid drawing too many cards too early showed a forethought that even the casters missed – adapting to unusual situations like these is absolutely necessary to win consistently. And perhaps the fact that it's an unavoidable part of the card game explains Tyler being a good loser, something which could easily have soured the whole thing if he'd been visibly angry. After all, since randomness is baked into the esport, it might as well be the kind that makes for nailbiters.