The heavy metal thunderdome that is World of Tanks has finally hit 1.0, heralded by the sound of explosive shells and colliding war machines. It’s not 1.0 in a conventional sense, but it does give us the excuse to finally give it the ol' review treatment. Here's wot I think, eight years late.

World of Tanks sits at the intersection between arcade and simulation. Its battles are fast-paced and brief, with simple objectives and fleeting lives; but it’s also a game of geometry and tactics, of finding the perfect angle and trying to force enemies to reveal their weak spot through teamwork and even stealth. 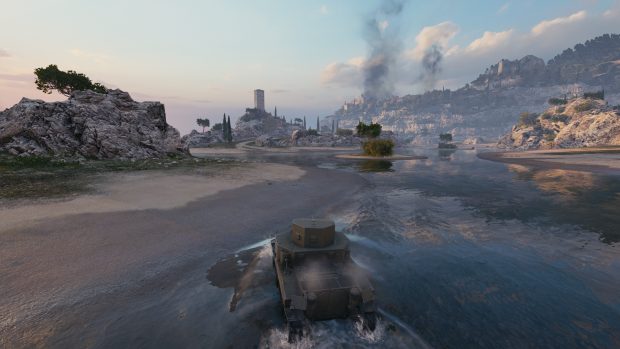 I use the authenticity versus accuracy comparison a lot when I write about games that dabble in history, military or otherwise, and I’m bringing it out again. If you don’t think about it too much, World of Tanks’ bloodthirsty behemoths feel like you’d expect from a tank, even though they’re massively abstracted. A lot of the heavy lifting is done by the obsessive graphics and audio engineers, whose work is newly highlighted in this 1.0 update. They’ve asked questions like “How would water react to a tank moving through it?” and “What does gunfire sound like in a valley compared to a field?” and then tried to replicate it in-game. It’s these tiny considerations that make the battles feel real and tangible, even when tanks are ramming each other off cliffs or skating across ice lakes.

World of Tanks is a lot more restrained than the bombastic trailers full of tanks smashing into each other and blowing up suggests. It’s a considered action game that creates just as many quietly intense moments as explosive brawls. And these fights are dramatically different depending on not only what class of tank you play, but what tier you’re duking it out in, as well. In the early tiers, for instance, you’ll mostly be fighting as and against low-damage light tanks and the occasional SPG, the artillery class. Later, medium and heavy tanks start to appear, along with predatory tank destroyers, and battles start to become more complex as a greater number of strategies become viable. 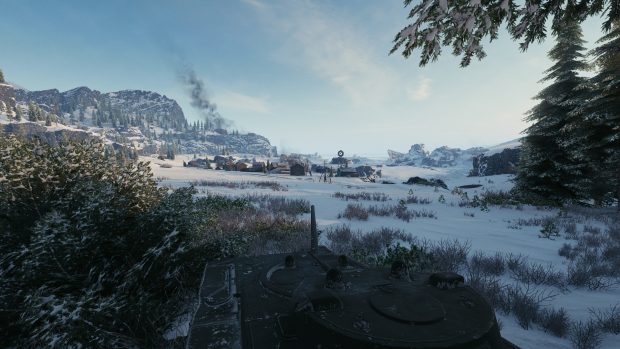 Each class has different priorities. SPGs typically hang back, finding a perch or hiding spot from which they can safely pick targets with their bird’s eye view of the battlefield. Light tanks dash around, scouting and spotting enemies, helping out SPGs in particular, but also the entire team. Tank destroyers prowl the map like deadly hunters, looking for heavily-armoured foes to demolish.

There are exceptions in every class, however, and the class of a tank doesn’t always define its role. There are beefy tank destroyers designed to square up to their quarry, head on, the tank of tanks, but there are also tank destroyers that are better off attacking from long-range, preferably near bushes they can hide in. This means there’s usually quite a few reasons to dip into a new class, even if it’s one you think you won’t enjoy. 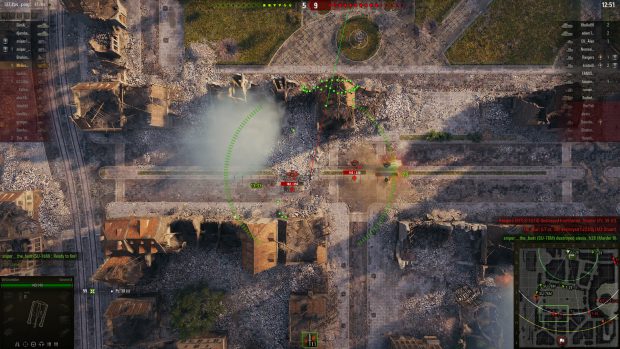 I’ve become rather partial to support tanks since I started playing again. Despite its importance, teamwork isn’t as common as you’d hope in World of Tanks’ battles, at least not the random ones. There’s a minimap and an alert system that both prove to be extremely convenient, but only when people are paying attention to them. Playing a support role, then, can be simultaneously rewarding and dispiriting.

There are usually at least a couple of players being communicative, though, and it just makes playing something like an SPG a lot more engaging. Having that extra-long range and that broader view of the battlefield means you can react a little quicker, and perhaps rescue a friend-in-need even if you’re on the other side of the map. And since you’re not on the front-lines, it really helps to have people highlighting problem areas where you can assist. 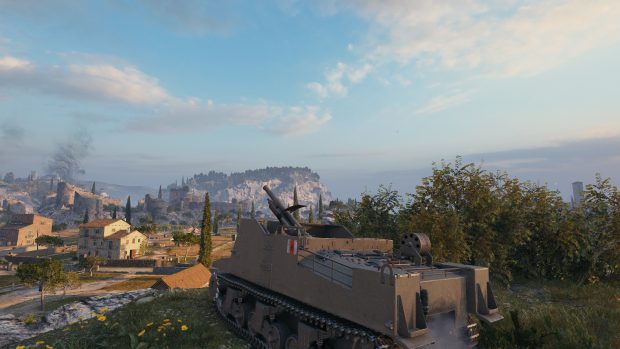 Destroying enemy tanks isn’t as simple as lining up a shot and firing. Tanks are elaborate, modular machines and no two models are identical. Their weak spots, heavily armoured areas and the thickness and angle of that armour all depend on the tank, so it pays to do a wee bit of homework. The reticle turns green when you’re hovering over a weak spot, but in the heat of battle, you don’t always have time to search. You’ve got to know even before you start aiming. And even then, you need to take into account the effectiveness of your own gun and ammunition, your tank’s weight and engine power, and of course your accuracy. If you’re moving, for instance, or are trying to fire quickly, your shots are going to be a lot more likely to go wide.

The result is that a single 15-minute fight can contain all manner of near misses, close calls, tense standoffs, explosive charges and calculated assaults. With so many different types of tank, a lot can happen. And if you’re taken out of the fight, you can head straight back to your garage, pick another tank and jump into another game straight away. Once the battle you left is over, you’ll get access to the other tank again. World of Tanks has a lot of faffing around, but it’s extraordinarily good at getting you back into the action as quickly as possible. 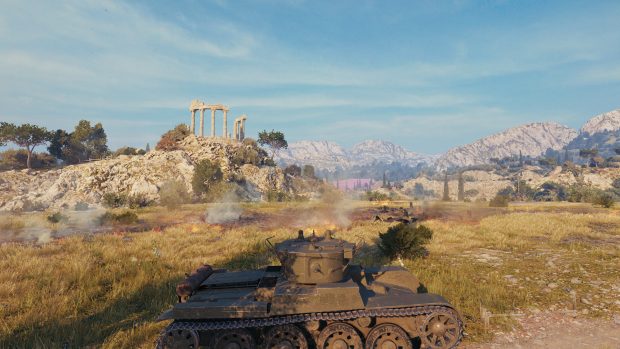 Most of the faffing is relegated to World of Tanks’ convoluted progression system and business model. A boot camp tutorial that walks new players through a series of battles, interspersed with progression and currency walkthroughs, makes the first 30 minutes of the game surprisingly breezy. By the end you’ll understand the basics, and a bit more, as well as getting access to three tiers of tanks. You’ll also have a bit of extra experience and credits that you can use to upgrade the tanks you’ve already unlocked. Then the training wheels come off and it gets a bit messy.

The problem is that, even once the systems have been explained, they’re overly-complicated and draconian. Take the process to unlock a new tank, for example. First, you have to unlock the previous tank in the tree, then you’ve got to use that tank to earn combat experience points -- slowly -- which you can then spend on upgrades and the next tank. But even then you don’t own that tank. You’ve just researched it. Then you need to spend credits to actually buy the tank, and then a few more credits to fill it with ammunition and consumables, like fire extinguishers and medkits so your crew don’t die in a ball of fire. 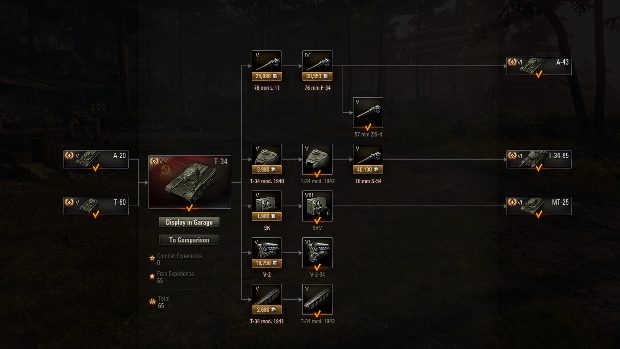 And that’s just the simple explanation. There’s also the separate free experience that can be earned slowly by any tank, which then gets place in a pool. Combat experience from other tanks can be converted into free experience by spending the premium gold currency. If you don’t have enough combat experience to unlock the next tank in the tree, you can use the free experience to get you there. After all that’s done, you then get the choice to spend even more credits on training the crew inside your tank.

It’s a horrible system that makes World of Tanks seem a lot harsher than it is. In the early tiers it’s a hassle, but you should be able to fill your garage with tanks and maybe even get your first tier V vehicle within a few days. After you reach the final few tiers, however, you'll start to feel the grind as you play in low-tier matches to maintain your high-tier tanks, saving up to buy the fancy ammo that will allow you to stay competitive. You might even win a match and still end up losing credits as you swallow the repair bill. The alternative is spending cash. 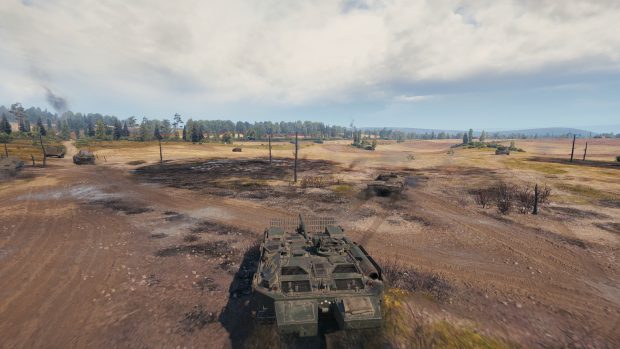 A premium account nets you more experience and credits after a fight, but big spenders can also splash out on fancy premium tanks. They’ve been a point of contention between Wargaming and its community since the early days. Wargaming argue that they’re different but not more powerful, but they’ve also been rightly pressured into removing certain tanks that were demonstrably overpowered. The issue goes beyond balance, however. In any competitive game, the introduction of premium-only stuff divides the community into the haves and the have nots. And in this case, letting everyone play together only exacerbates the feeling that some players have an unfair advantage, imagined or not.

This only becomes more pronounced in the higher tiers, where the game becomes more competitive and the premium advantages become more of a necessity. The message is: you can play with the big dogs if you want, but you should probably stick to the low-tier fights. If World of Tanks 1.0 is going to bring in new players, not just lapsed ones, the message needs to be different. 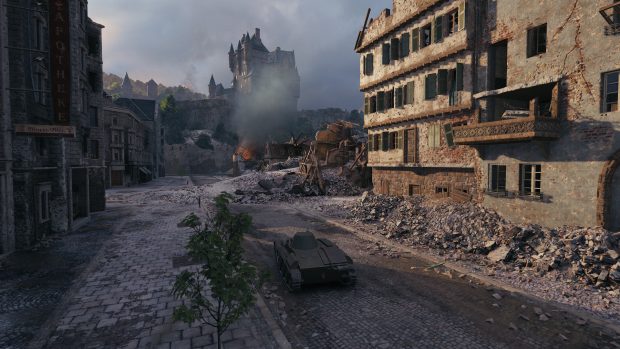 Despite its eight-year evolution, I still feel the same way about World of Tanks as I did way back when I first decided that battering armoured vehicles seemed like a fun way to kill an evening. The big changes are largely positive, even if not every patch has been a success, but Wargaming’s flagship remains a great game that frequently gets in the way of itself. Reaching the higher tiers should feel like an achievement and the source of more exciting battles; it shouldn’t leave me worrying about bills and grinding. I prefer to leave that to real life.

World of Tanks 1.0 is out now and can be downloaded from the official site.