Right then you muppets. I bet you've heard all sorts of old rubbish about London town in Watch Dogs Legion, 'aven't you? You've probably got yer knickers in a right twist over how faithfully it recreates the UK capital, and how totally facked it is.

Well don't you worry no more, sunshine. The name's Ronald McNationalism, hardest bloke in DedSec, and I'm going to take you on a little bloppity-blip (that's geezer chat for "trip") round some of the city's most iconic landmarks. We'll start with the Shard, that massive tower full of money in Southwark. You can see behind me there, plastered with massive warnings about what an utter bloody danger I am.

But first, time to head to the riverside, and a pub that's eerily like the Barrowboy & Banker in Southwark, to wolf down five pints on my own at 11AM. 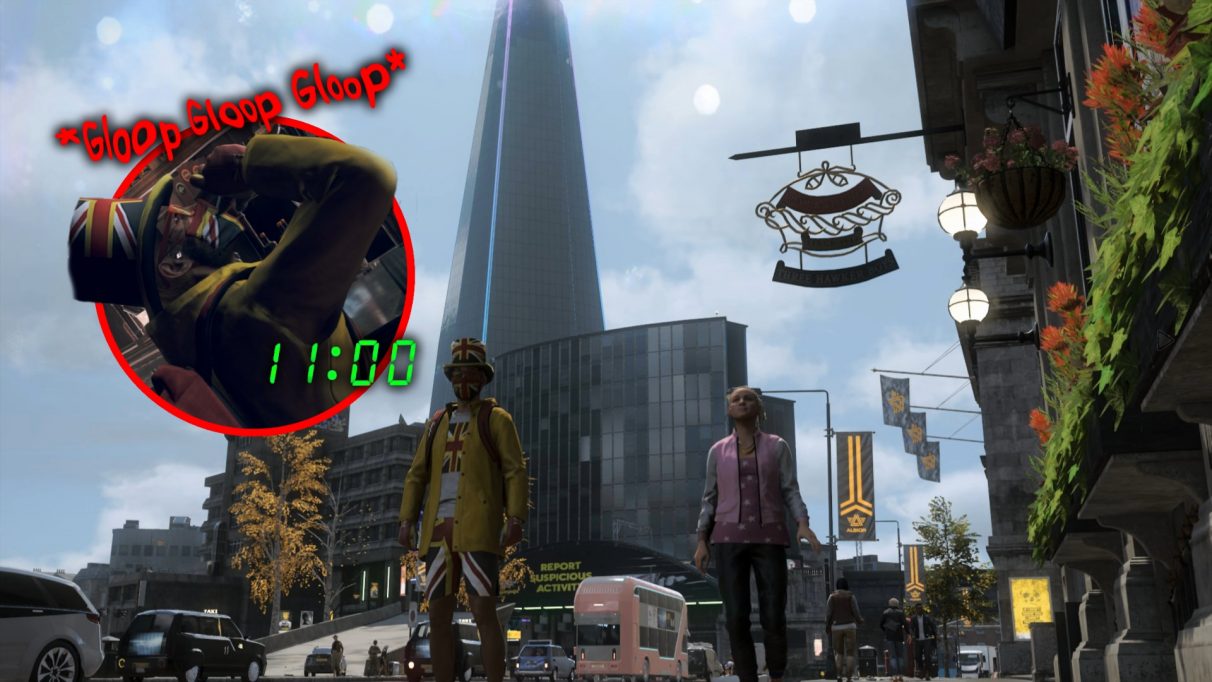 Aaaaah, that's better. Totally fackin' Barrowboy & Bankered. Now let's get on the road and see the bleedin' sights. First up, we'll head to the Tower of London. 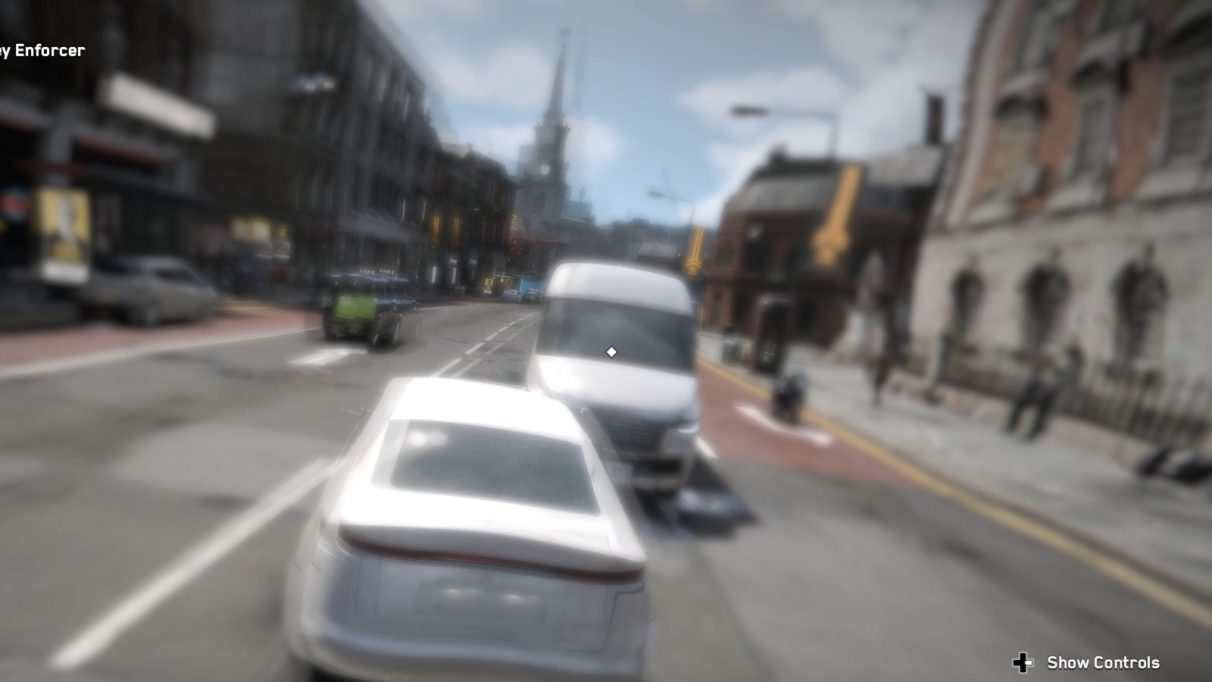 That might be a Hawksmoor church on the skyline there. Dunno, too pissed. Hang on, just realised the Tower's only on the other side of the fackin' Thames, isn't it? 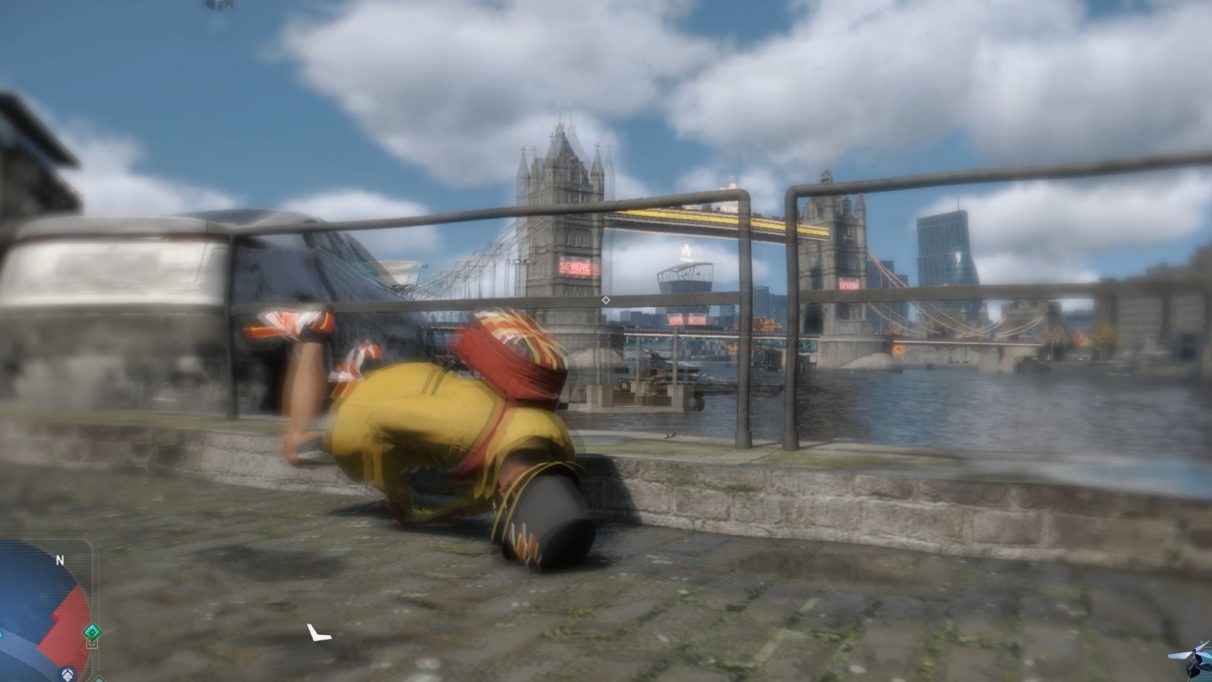 Ah well. There's Tower Bridge, anyway. However, it's fortified and swarming with Grade A bastards from Albion, so I ain't getting across that way. 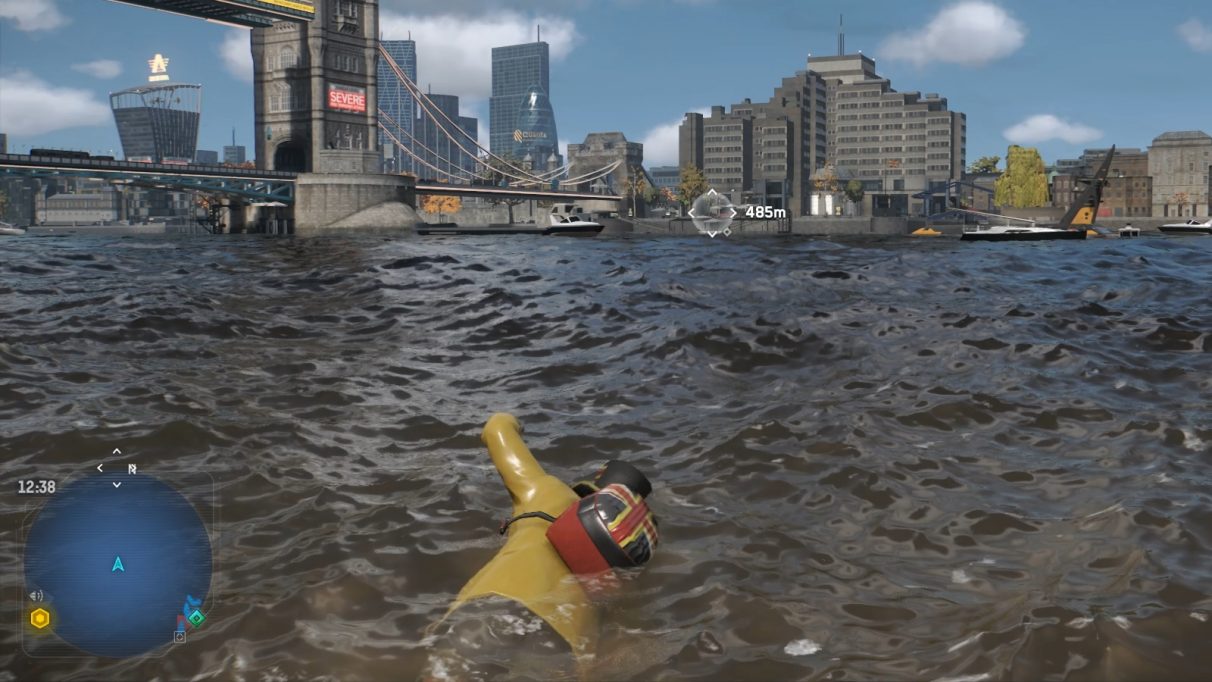 Nothing quite like a nice swim through a load of cyberpunk filth to sober you up after a midmorning session. Glad I bought this Captain Birdseye coat now too, and all. 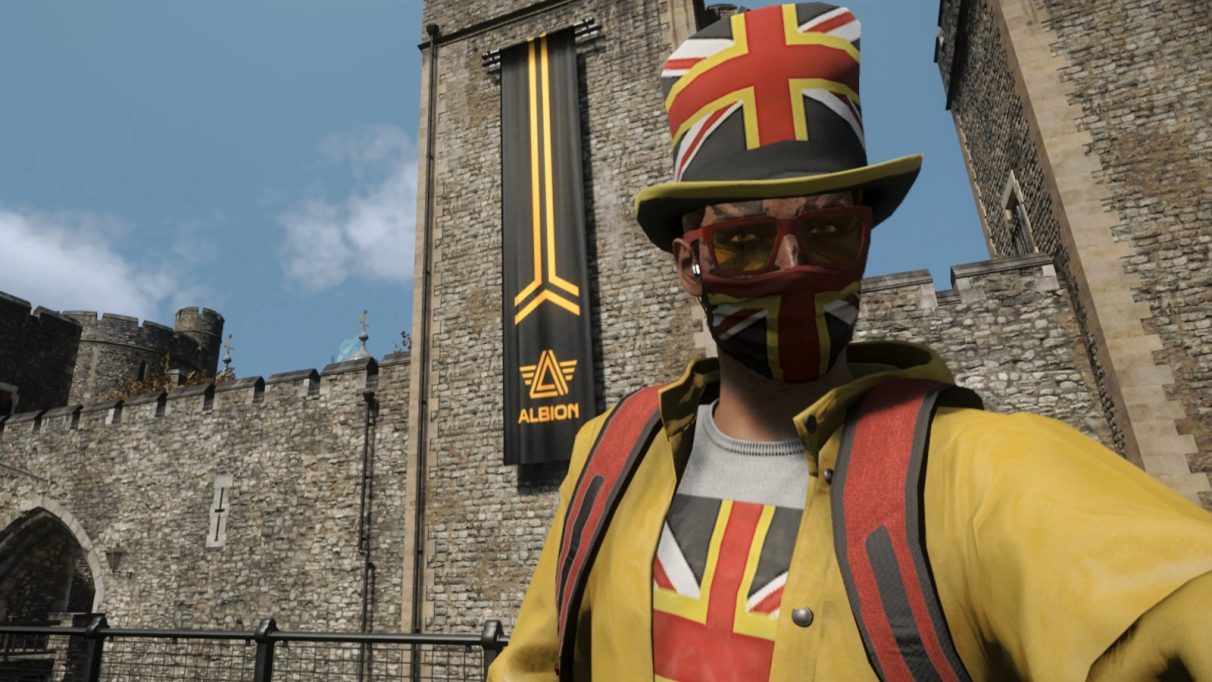 Bad news. The Tower of London's there all right, but it's chock-a-block with gits. Those complete wagons are gonna fill me full of stoats and voles (holes) if I go in on foot, so we'll have to nick a drone. 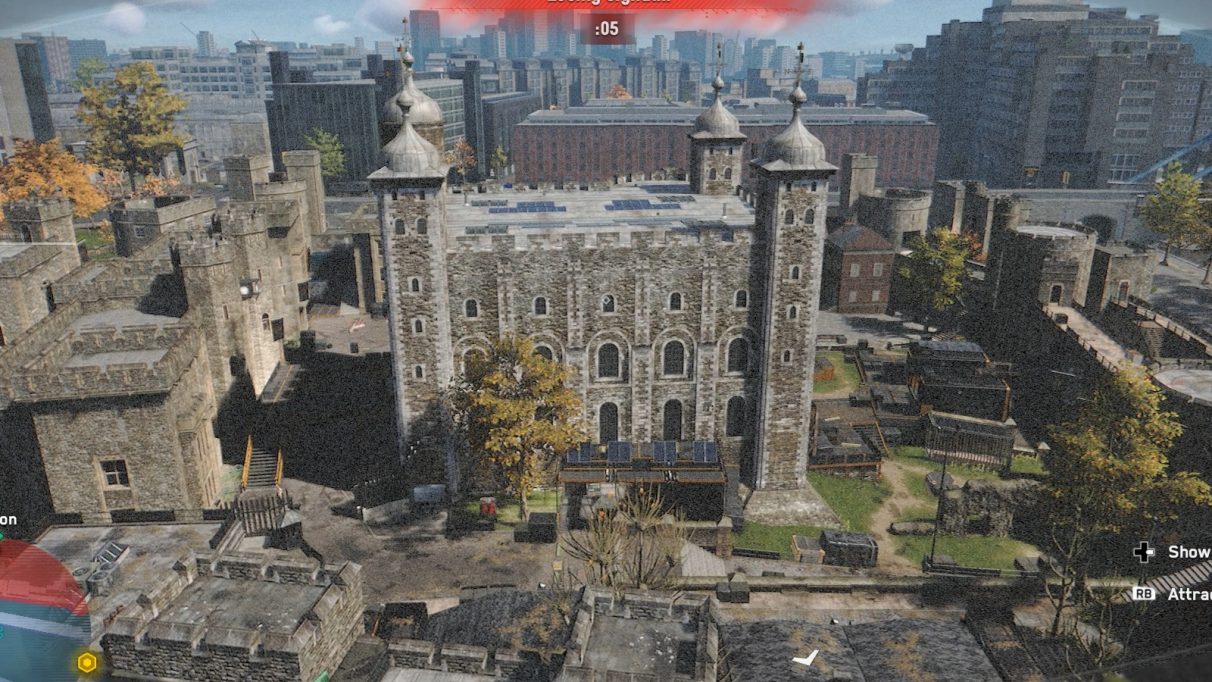 Stone the crows! They've literally stoned the bloody crows! Albion have taken the famous ravens off of their roosts, and forced them all to smoke bongs and bongs of 'orrible future drugs until they went mad and burst. No wonder London's in such a fackin' state! Better steal a high-powered sports car and head over to Buckingham Palace, to make sure her Maj is alright. 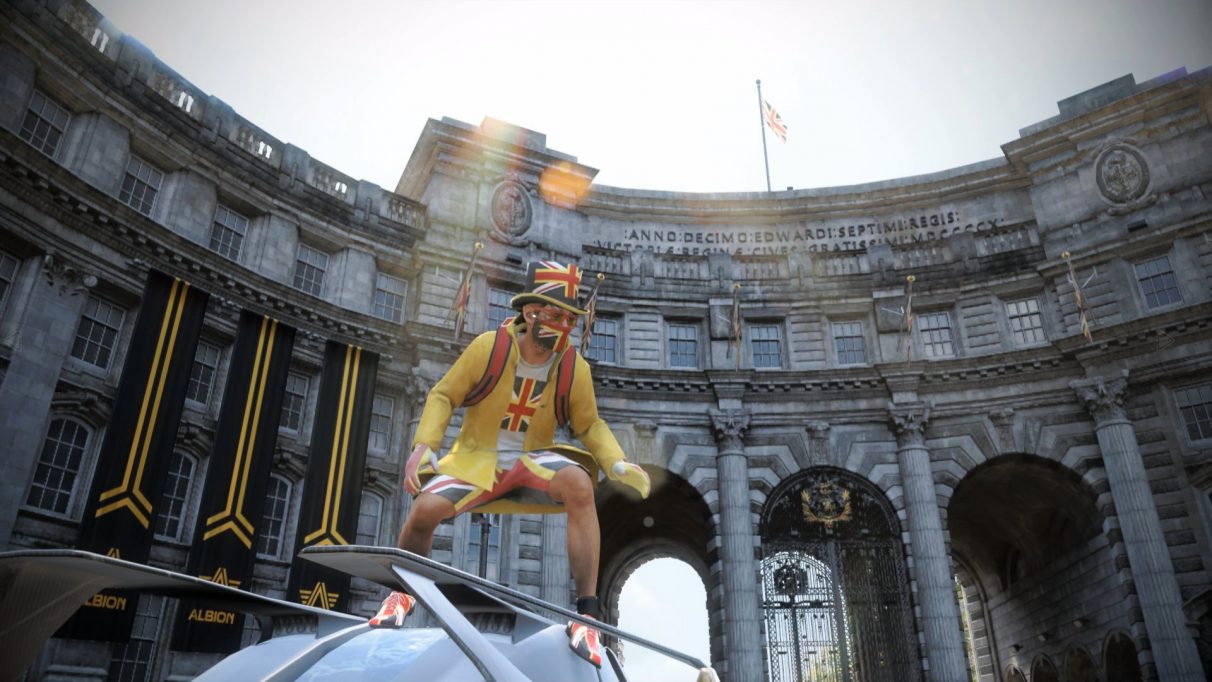 Saw this on the way there. Can't remember what it's called, but it's a landmark innit? Got loads of Roman chat written on it, so it's probably the colosseum or something. 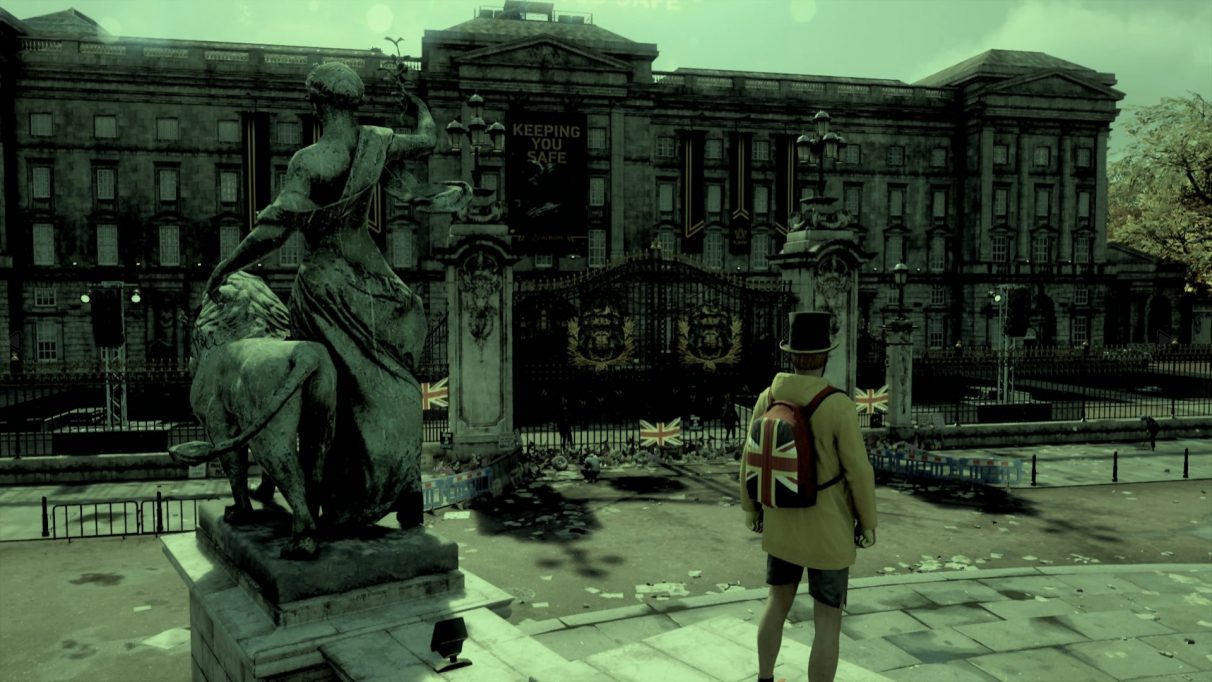 Bollocks. The oppression bois have gotten their dirty little spirit of the Blitz (mits) on the Queen's gaff and all! Is there nothing they won't stick their logo on for the sake of telegraphing their role as this game's primary set of fackin' antagonists? 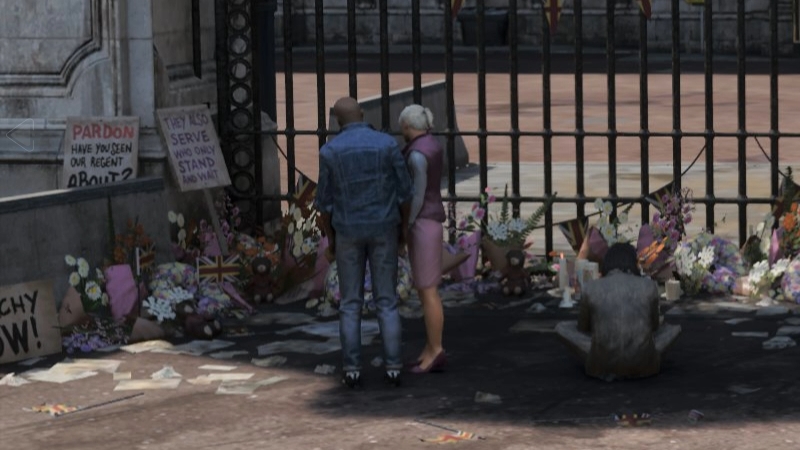 It gets worse, though. Look, there's some people doing a sad over a load of flowers. Mourning, I reckon. Could it be that Albion made dear old Liz do cyberdrugs until she burst? 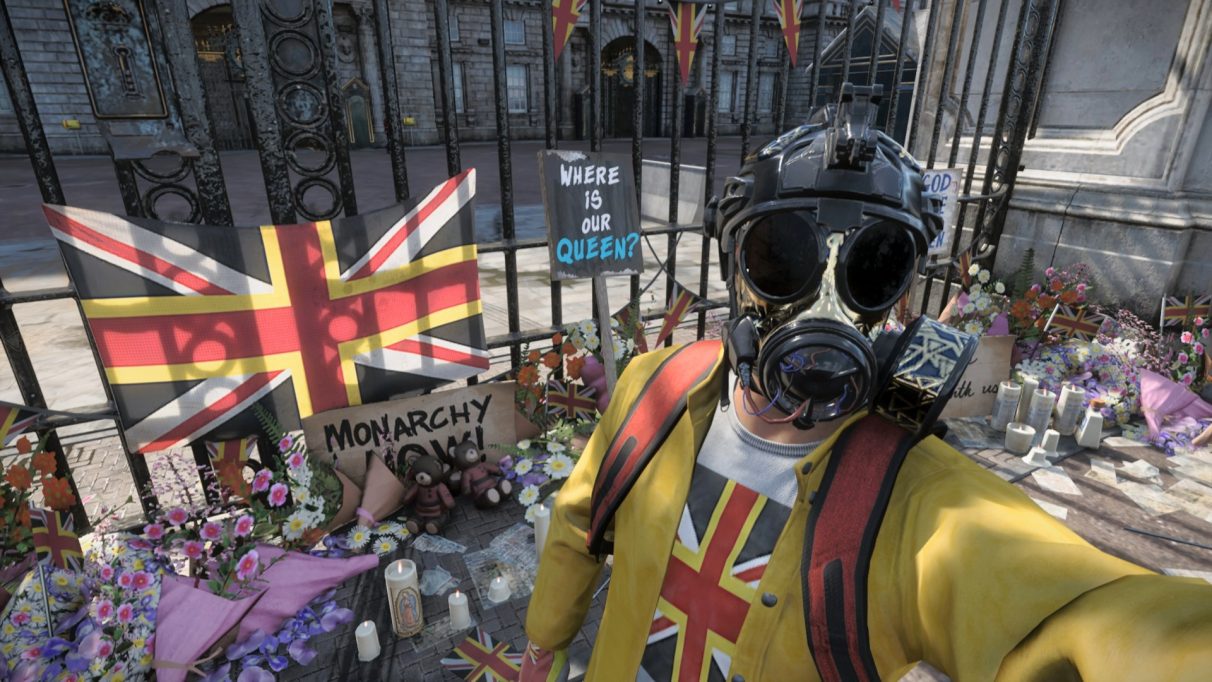 Lol, dunno. Accidentally got my shooter out instead of my camera so now I'm in a gunfight, you'll just have to make do with this. 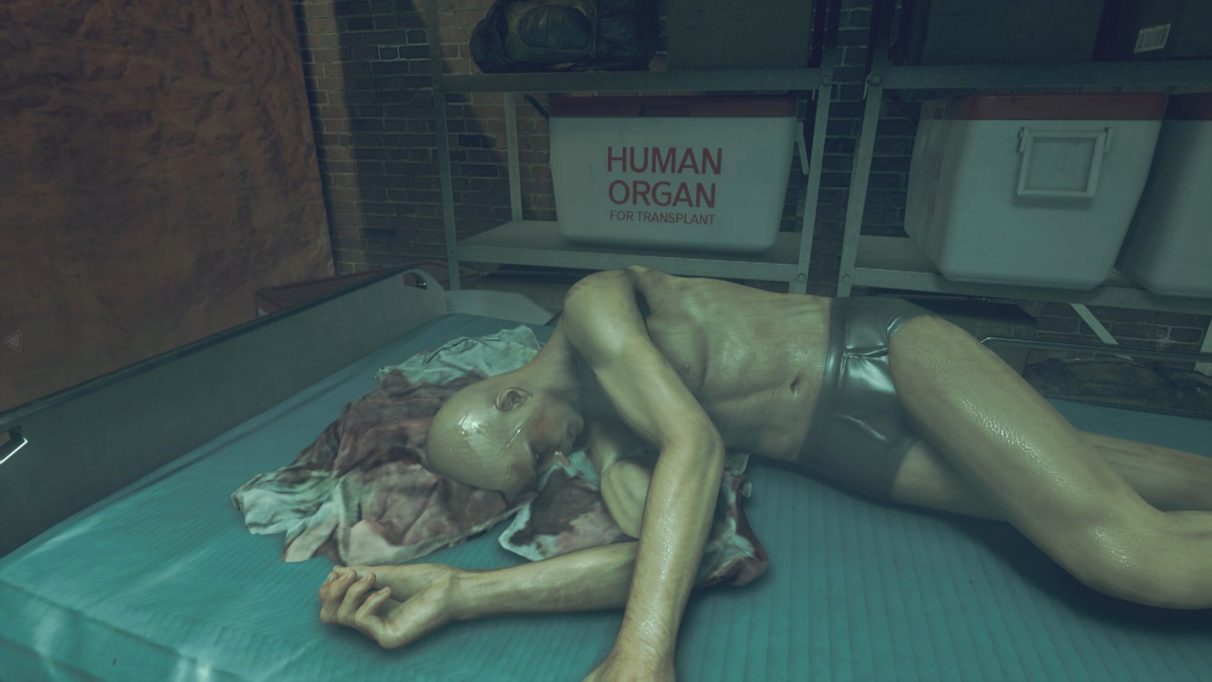 Whoops, how did this get in the slideshow. Haha. Moving on. 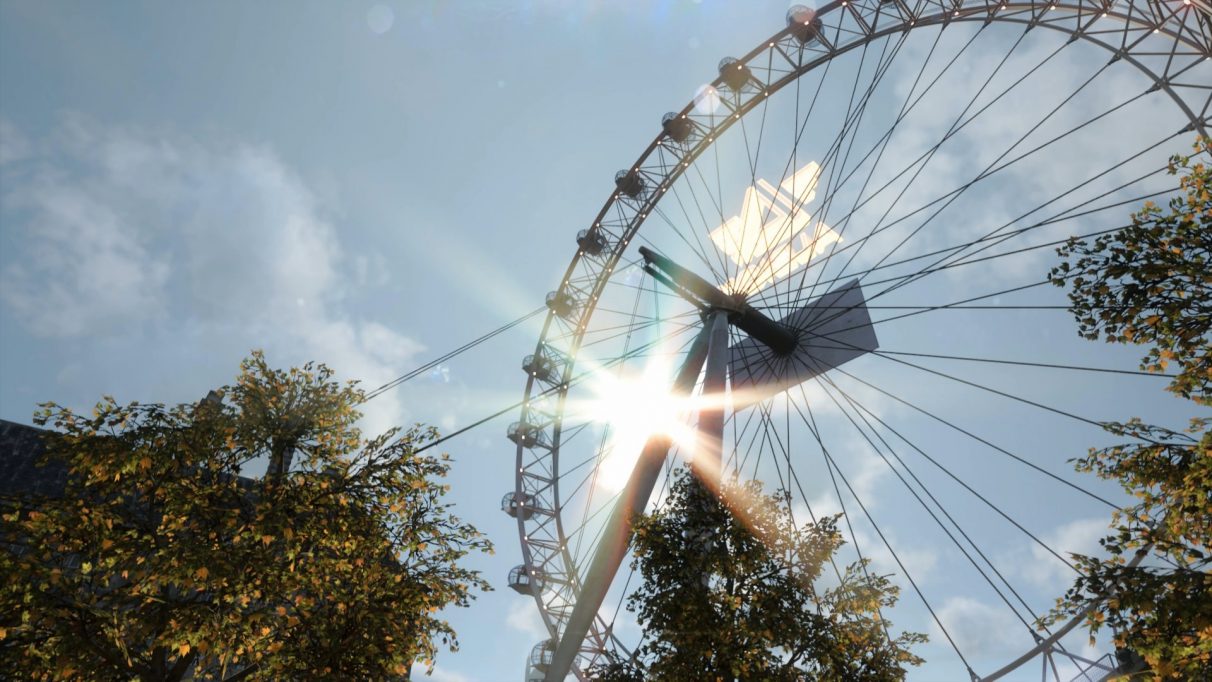 Right then, the heat's off for a bit, so let's cool this thing down with a nice trip on The Big Spinny, a.k.a Gigawheel, a.k.a The Millennium Bastard. 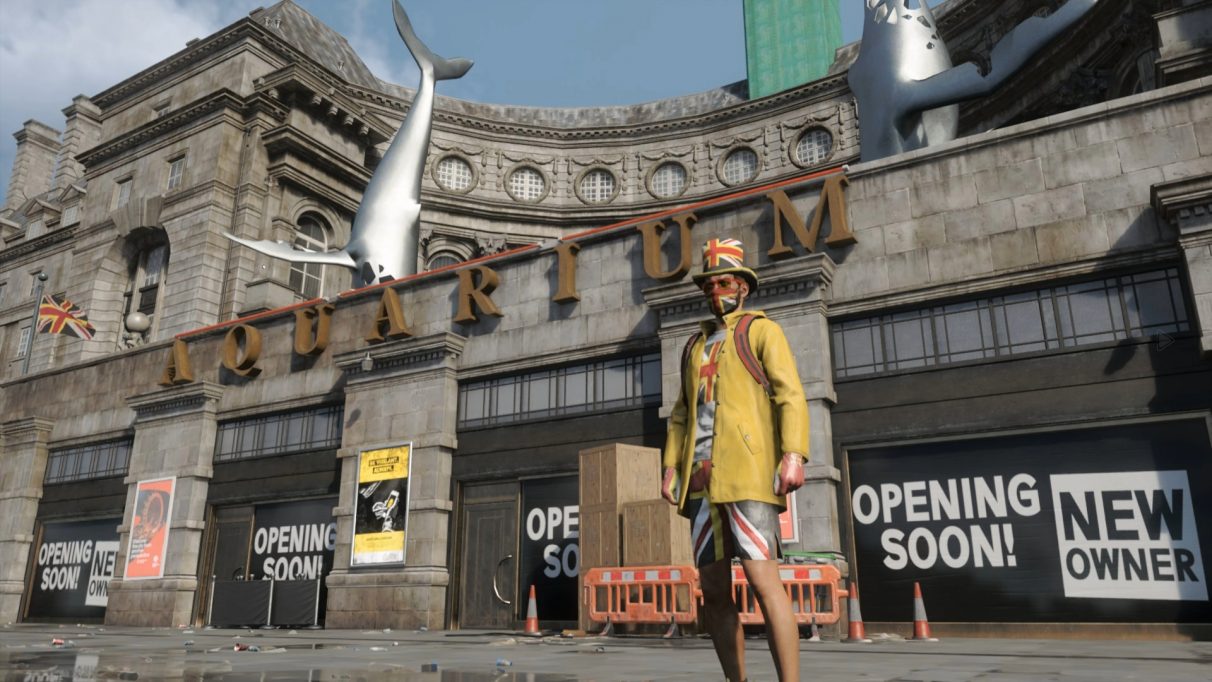 Since we're here on the South Bank, I reckoned I'd drop in on the old London Aquarium. But it's completely bloody Jabba the Hutt (shut)! Apparently it's reopening soon... no doubt as an Albion job, with all the water swapped with piss, and refugees instead of fish. The wankers. 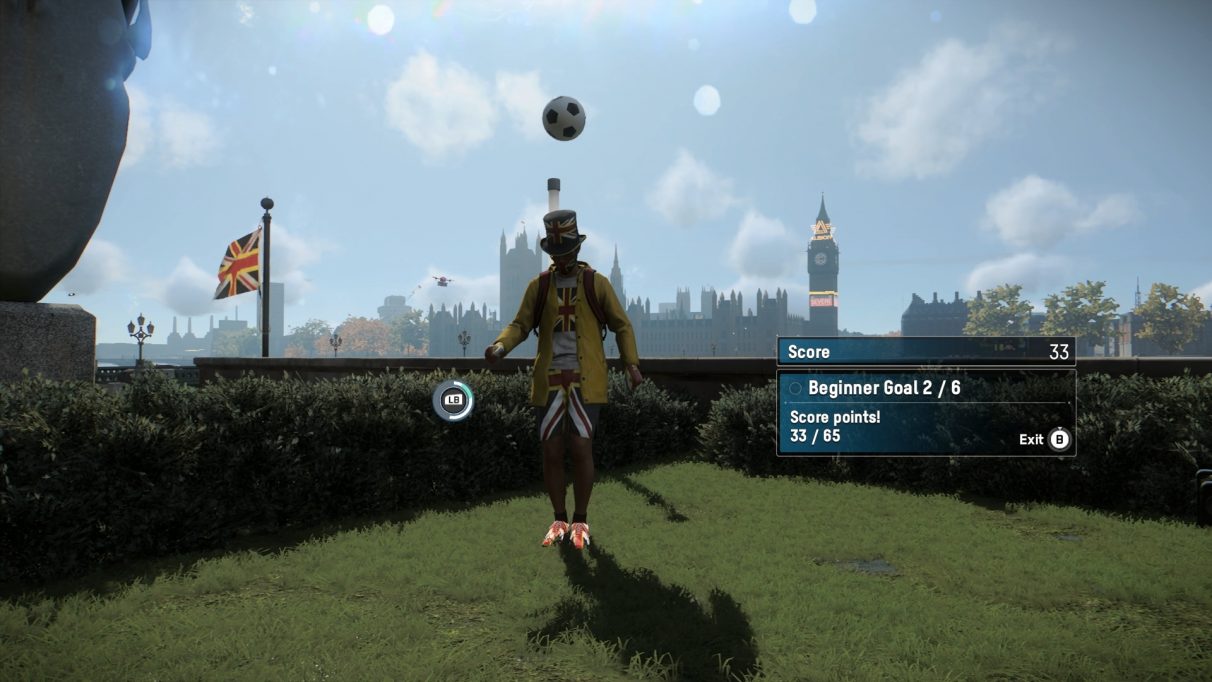 I play a respectful bit of football with myself, in protest, before jumping on a pod to go up in the England Til I Die (sky). 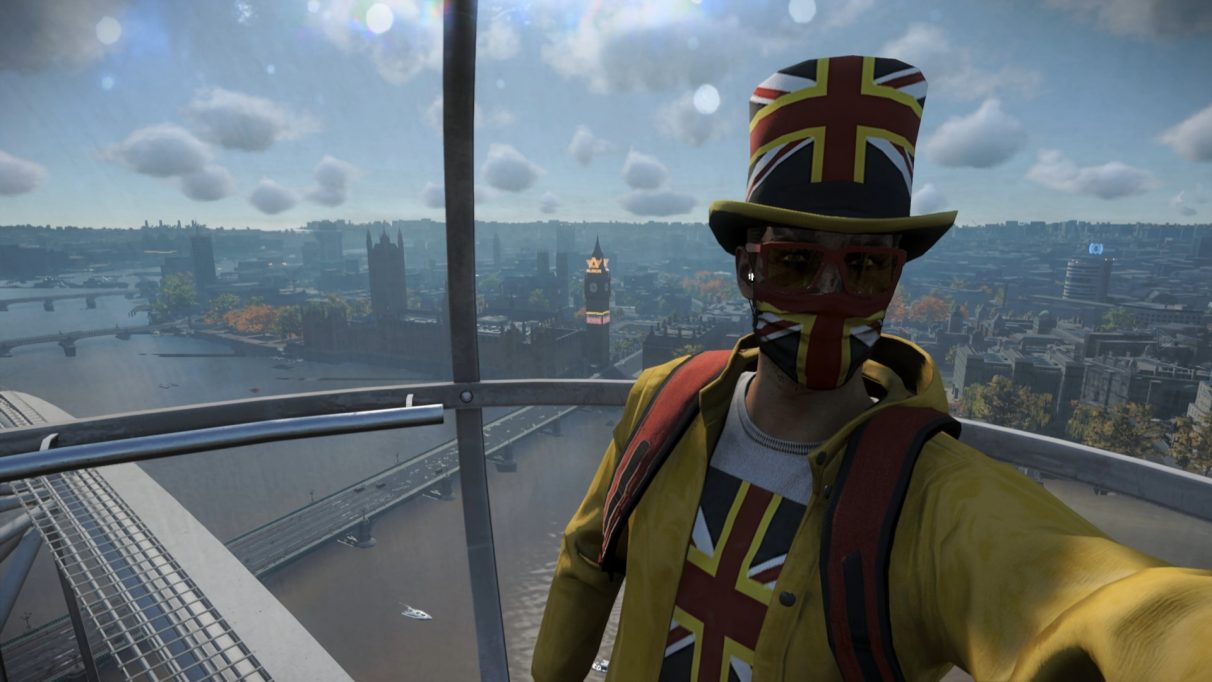 Fackin' marvellous - London from up in the air. Lovely, innit? There's that big clock on a stick, and the Houses of Politics, and big old Father Thames himself, rolling along like ten gigatons of expired curry sauce. 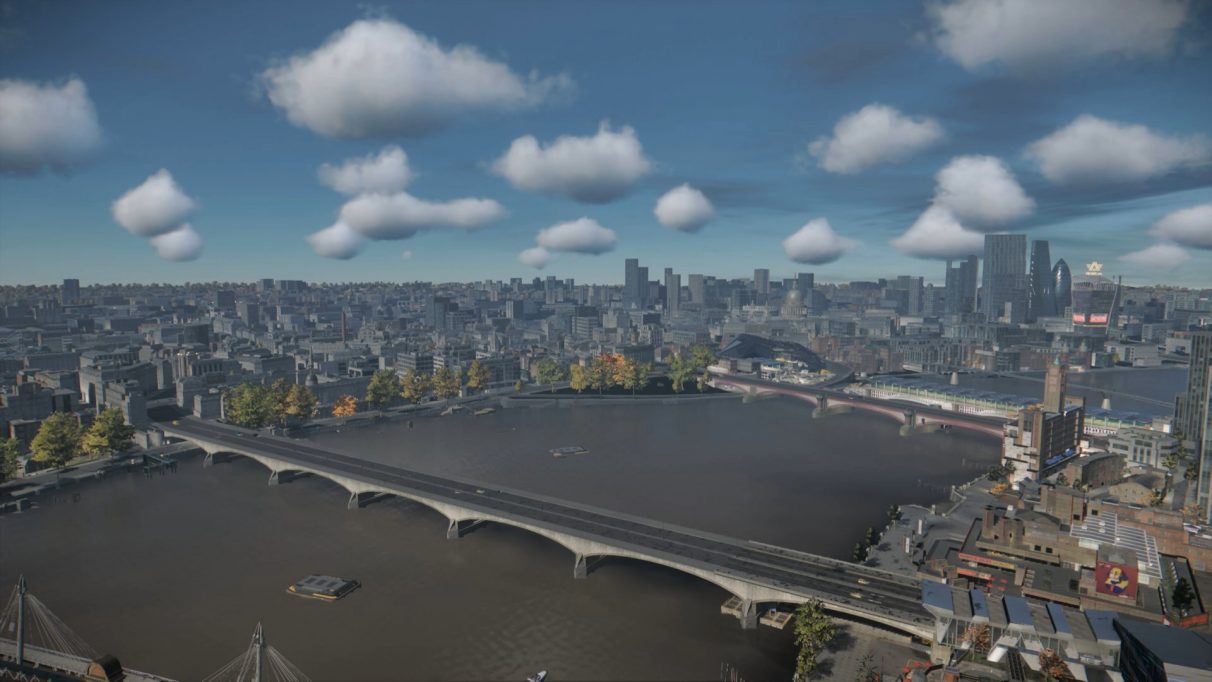 And there we are, right at the top of the world and bumping against the bloomin' skybox. London bloody town, spread out like a picnic with no food, just wasps. Greatest city in the fackin' world. Now who's for nineteen pints and a fist fight with a riot cop?