In Assassin's Creed Odyssey you play a stone cold bad ass. Kassandra (because let's be real: you're playing as Kassandra) walks without fear through Greece. Any person that steps to Kassandra, that person is getting a kicking. This confidence may account for Kassandra's healthy scepticism of some of the more bizarre aspects of Ancient Greek religion (e.g. is that lady really an Oracle delivering genuine prophecy, or is she perhaps high out of her mind and on the take from shady characters?).

But in keeping with Origins offering a sprawling open world experience, Ancient Greece is populated by normal Grecians, who have to earn a living though more mundane methods than being an unstoppable mercenary. There are loads of them doing normal jobs in every town, getting bored, going home, stopping for a scratch when they're tired. Ancient Greece is alive (and kicking, haha).

One of the first big areas you go to is Delphi, fertile and sunny and with a breathtaking but inconvenient river valley running right through it. There you'll find not only the famous temple of Apollo, home to the world's most famous stoner, but also a lot of gentle farm livin'. 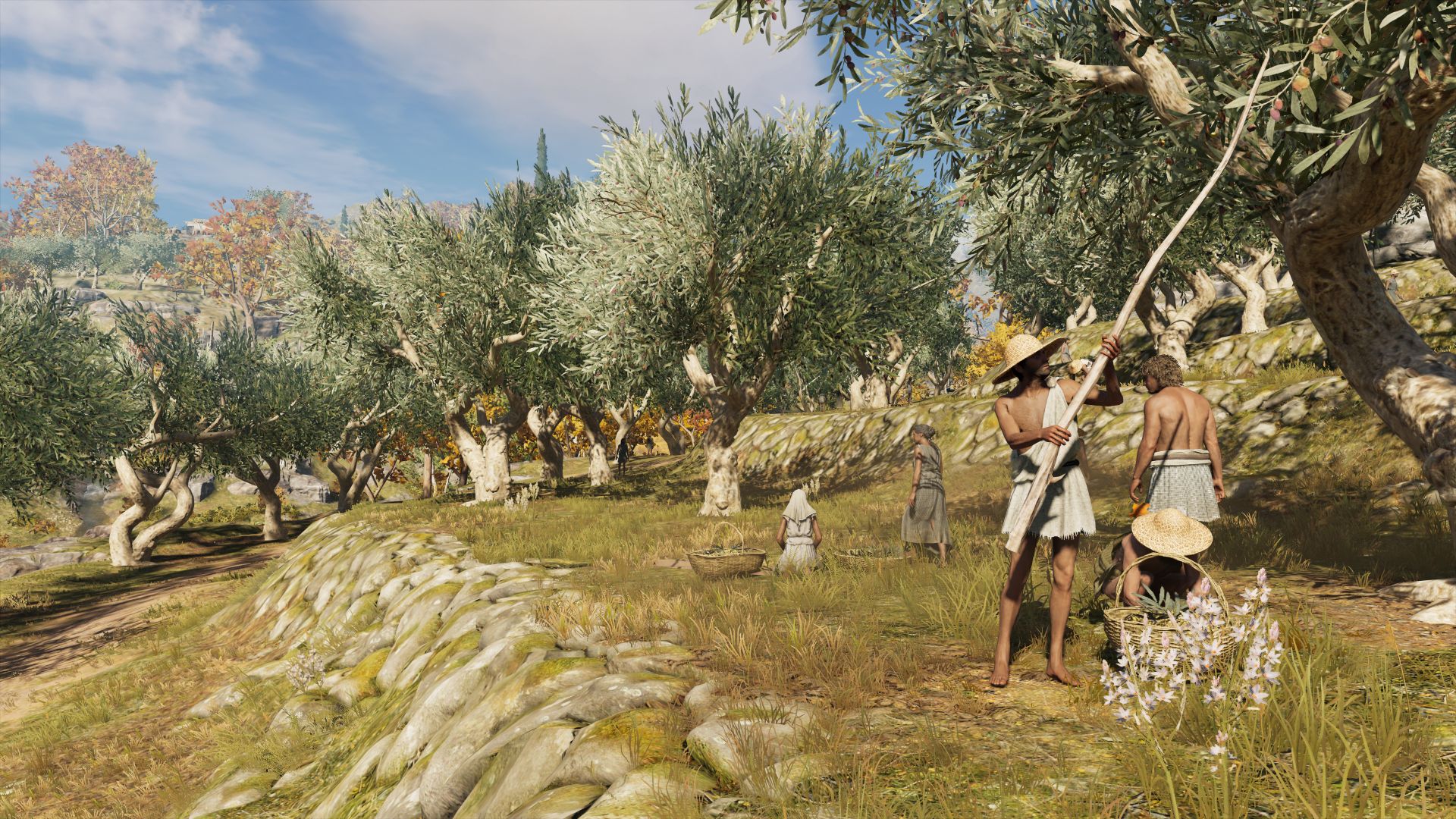 These people are harvesting olives, through the traditional method of whacking the branches about with a long stick and then picking the fruit up from the ground. 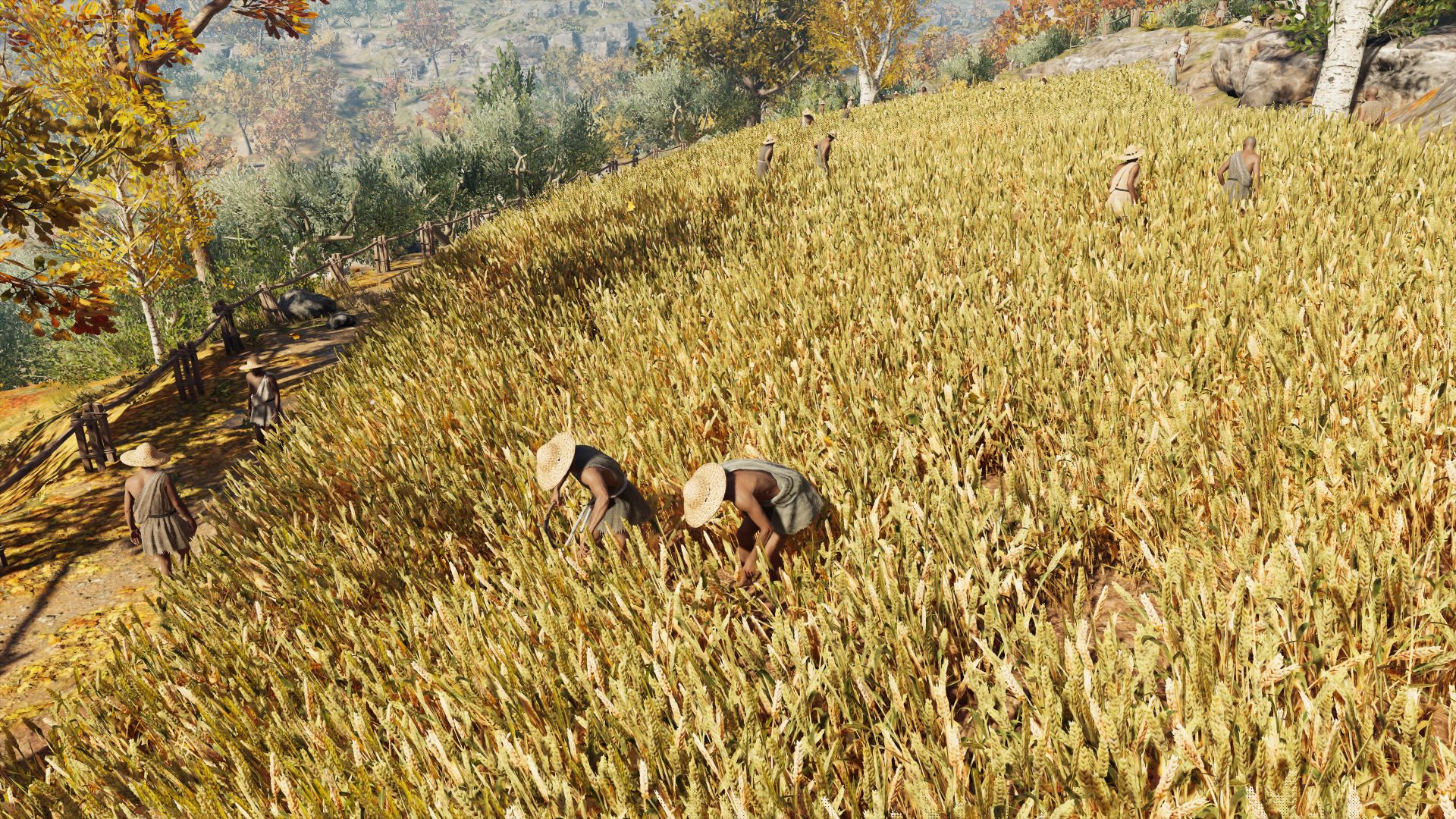 Here we have some lads going at a wheat field with sickles. 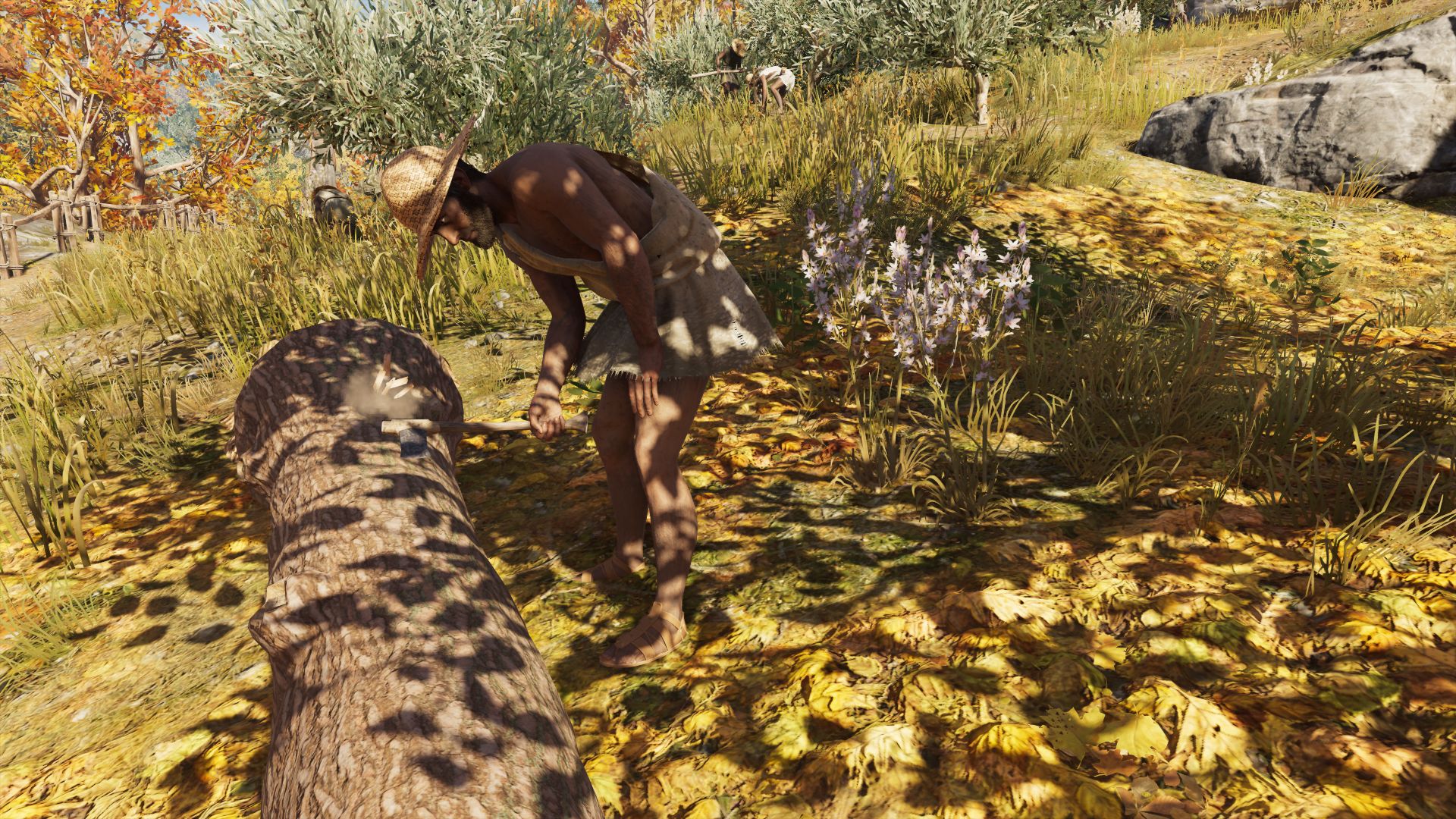 And then there was this nice man, attacking a felled tree but stopping every few whacks to go "Phew!" and wipe his brow. It's tiring work, to be fair. Someone should give him a bigger axe. 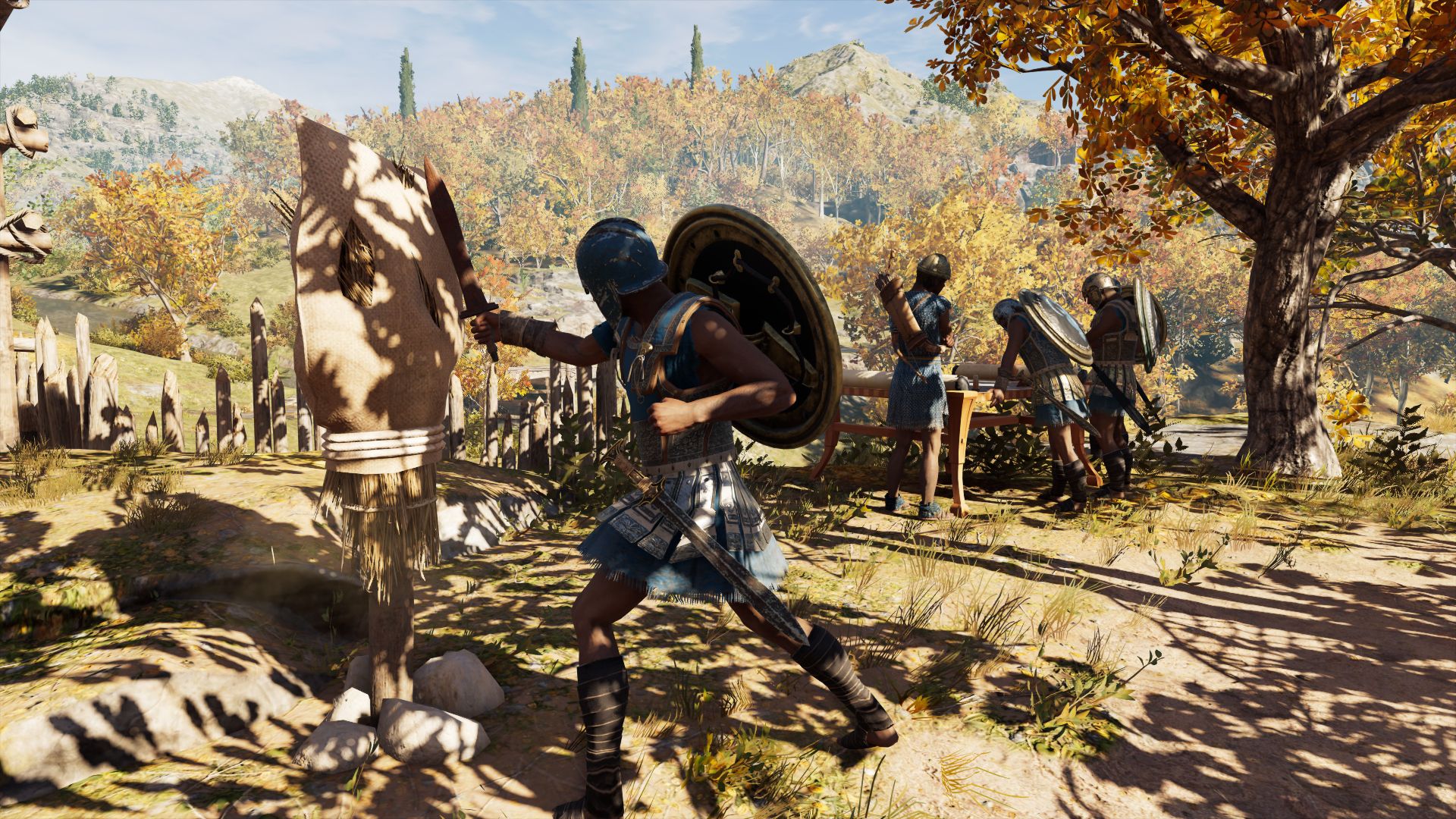 The backdrop to Assassin's Creed Odyssey is a war between Athens and Sparta, and being a mercenary you can play both sides, supporting whoever you think will be most profitable. The locals in other regions mostly just want them to all bugger off and go home, since their homes keep getting burnt down in the cross fire. Pictured above, an Athenian soldier practices his swordsmanship on a dummy, whilst his bros study the map table behind him. 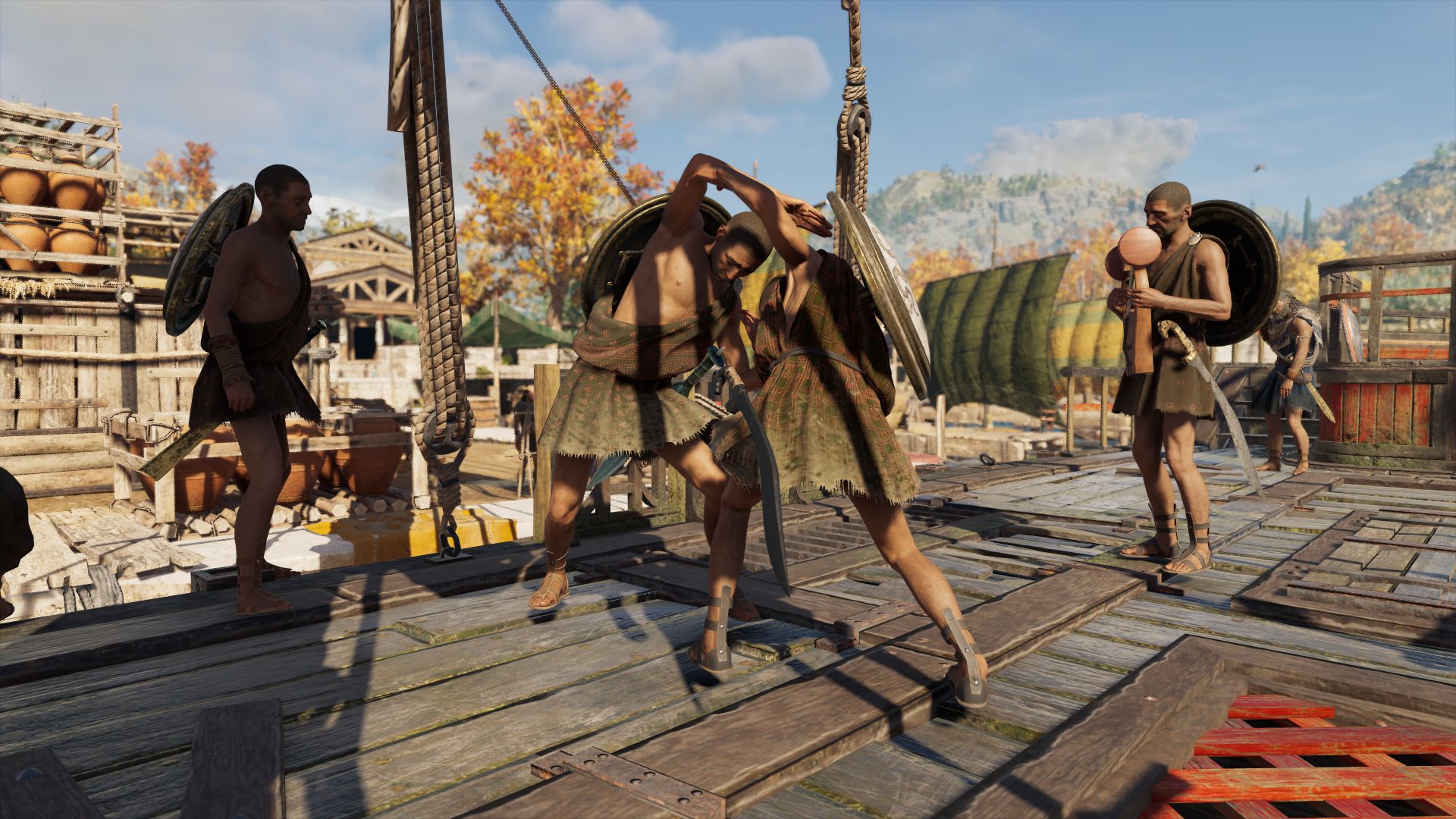 You can also terrorise the high seas in a ship, much more customiseable than in Origins or even AC 3 or Black Flag. But your sailors get bored when they're not at sea. Here, we were docked in Kirrha, known as Pilgrim's Landing because it's where most of the pilgrims to sacred Delphi will disembark. 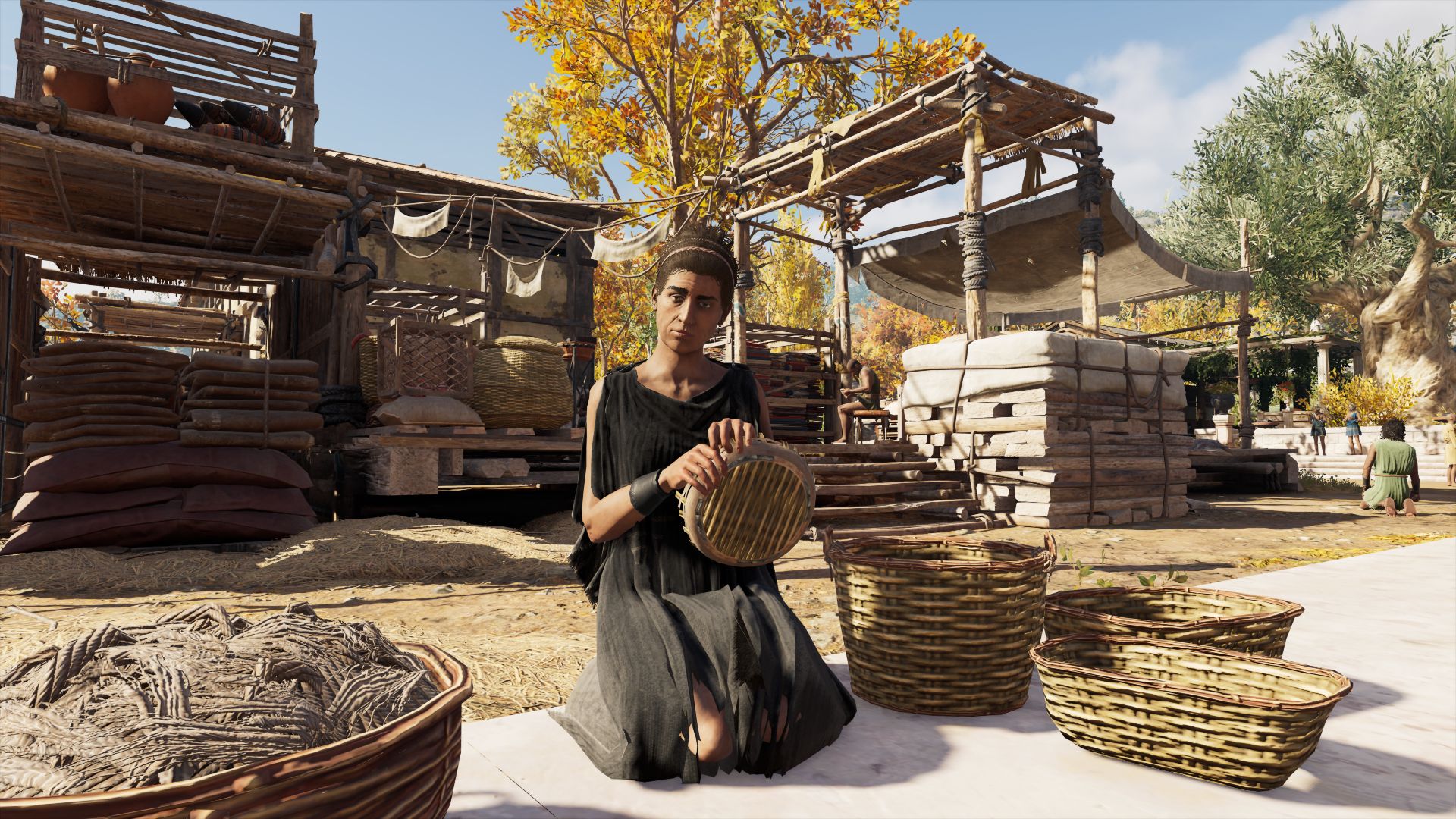 Kirrha is quite a bustling little town. There are a few women weaving baskets, and a couple gossiping whilst they make rope in a warehouse. 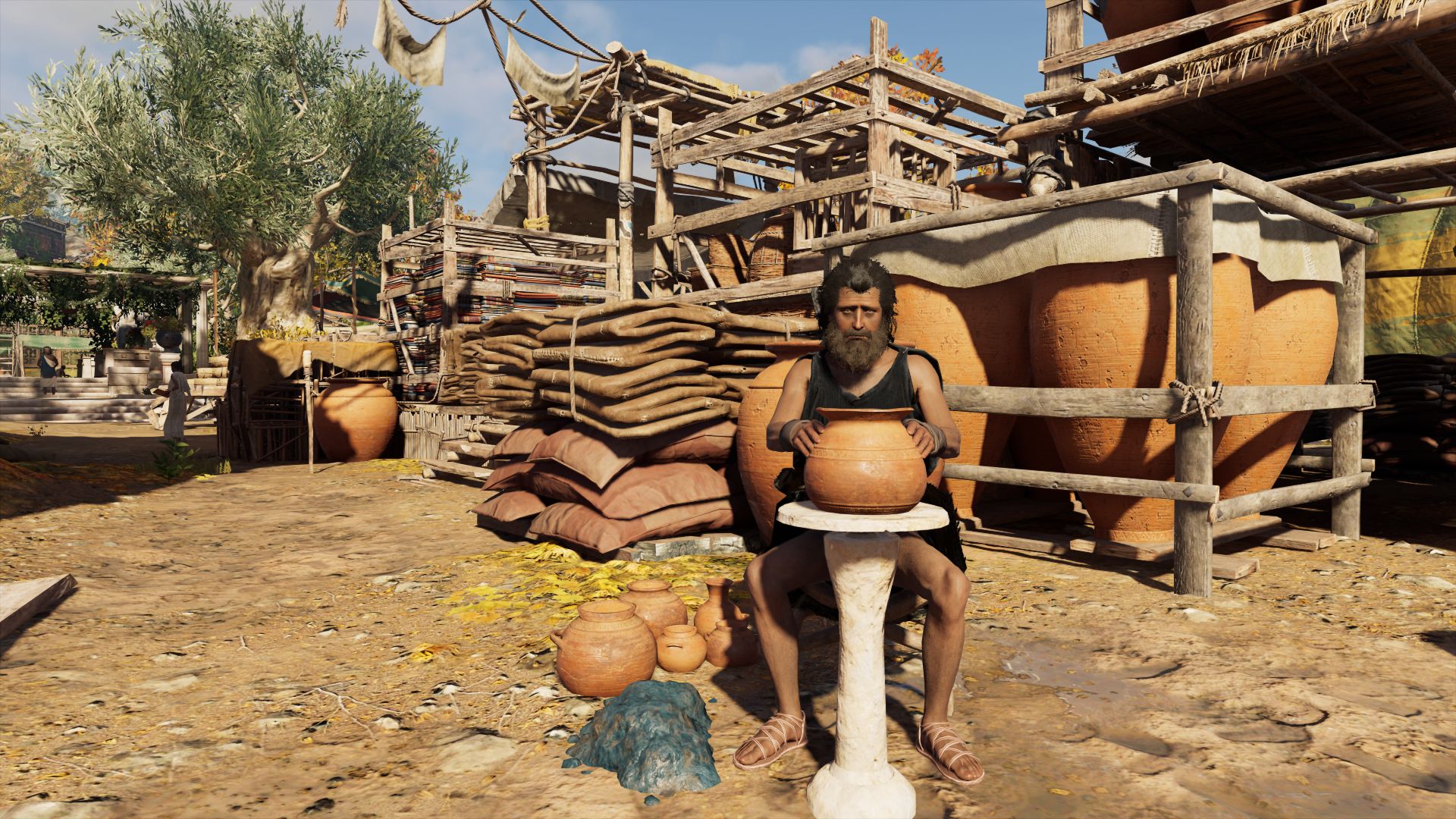 This man is a potter. You can see the raw clay in a heap next to him, and examples of his work behind him. He seems unhappy, though. I would describe his expression as "haunting".

The very first city you visit is Megara, the city of pigs. Proof: 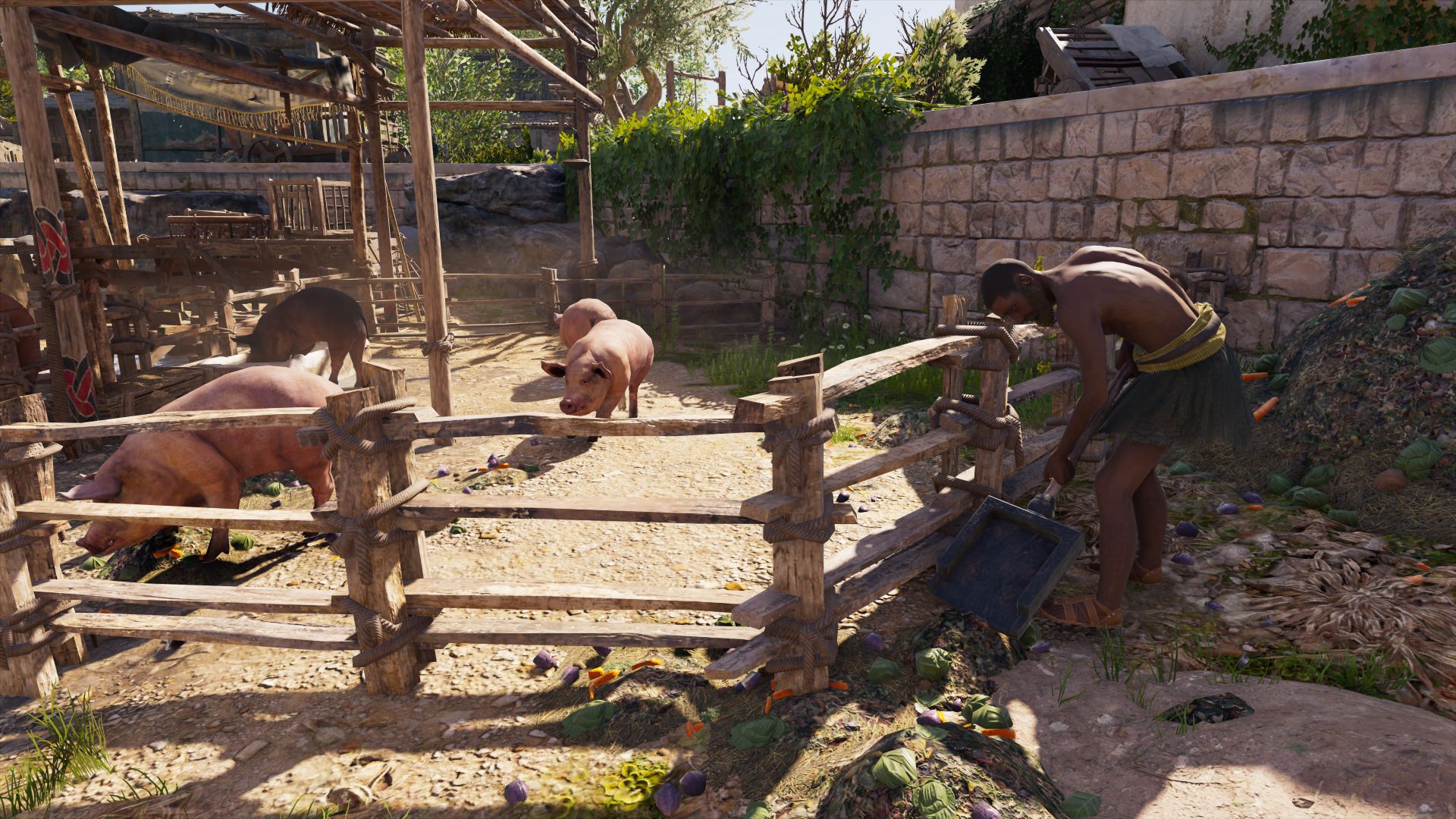 There are a lot of pigs around Megara, to be fair. Despite it being surrounded by the constant threat of war, Megara has a busy, happy market. There are food stalls selling stew that you can see being made in front of you, butchers with their fresh wares strung up besides them, and people milling about chatting. 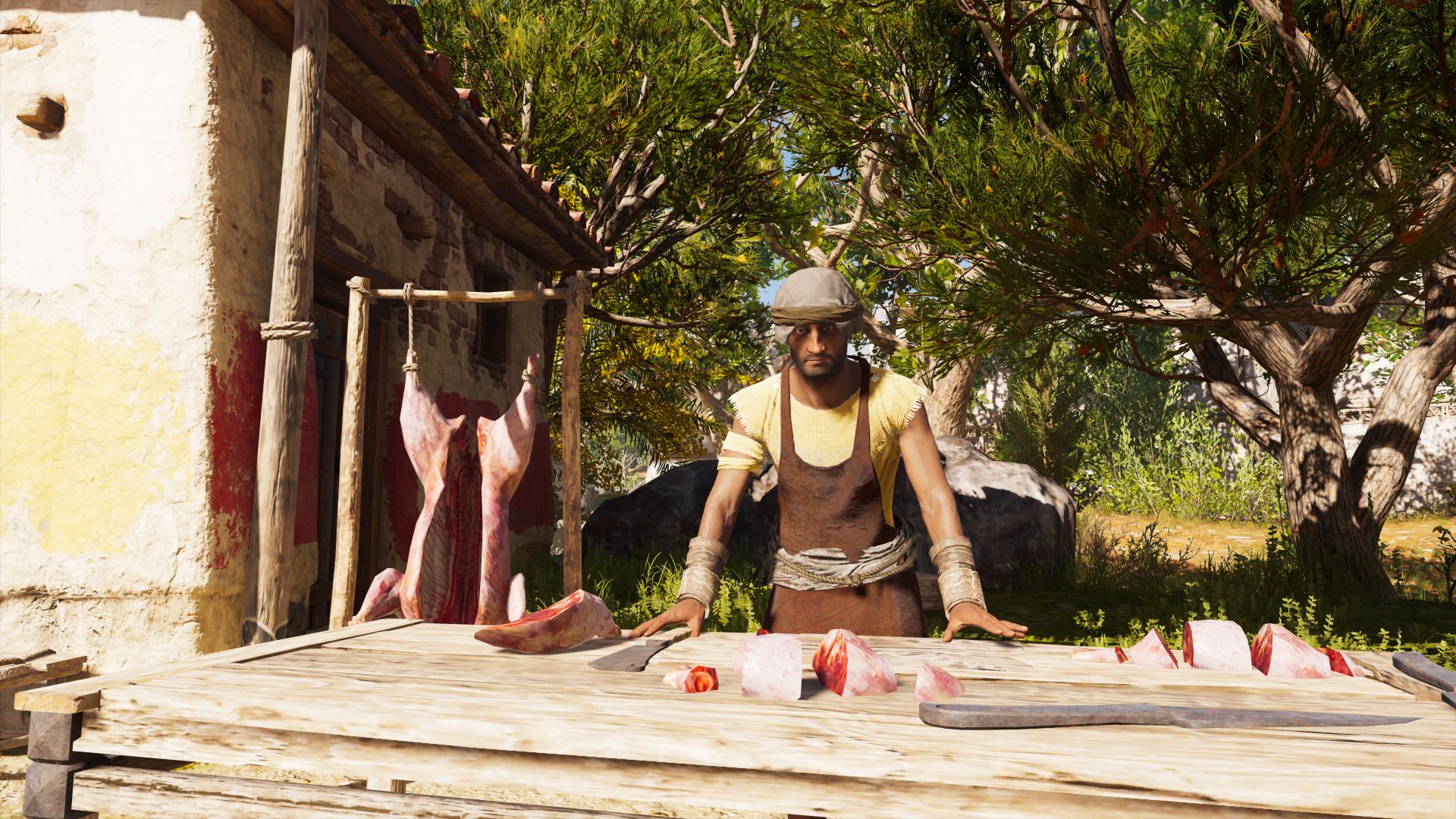 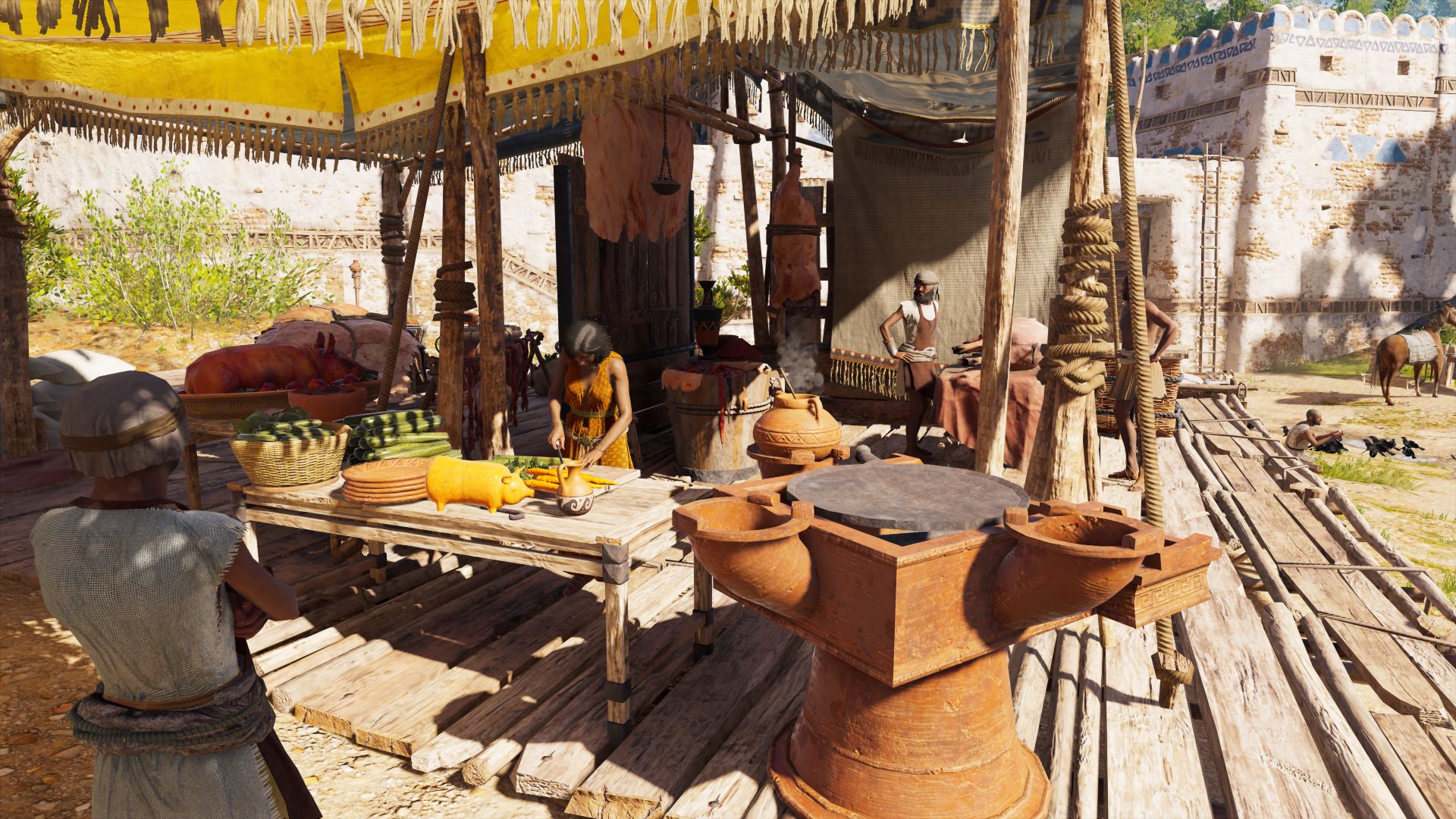 Religion is ever-present too, and if you're in a town or city you're only a few meters away from a shrine or a temple to one of the extended Ancient Greek pantheon. 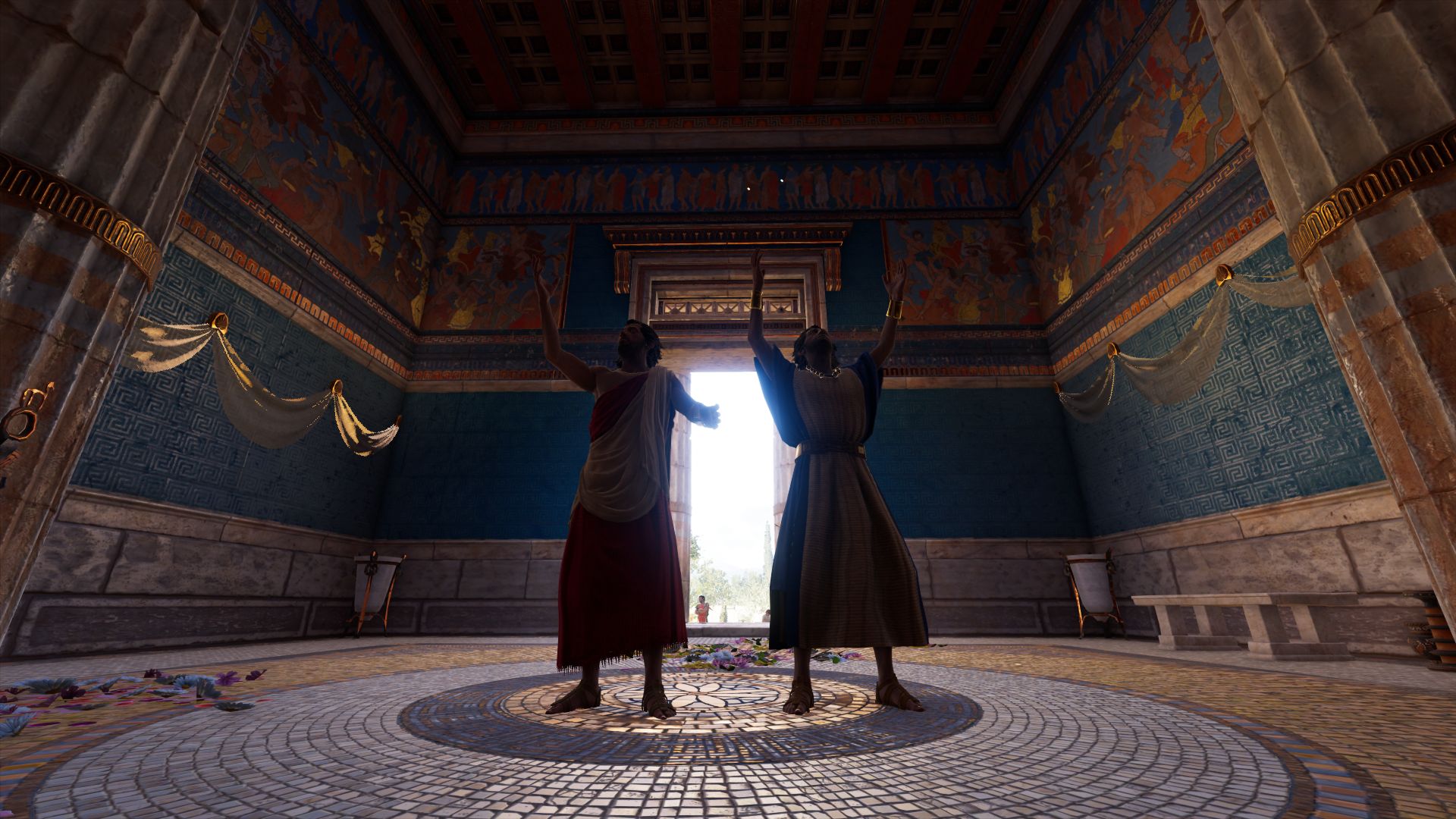 These usually have priests inside paying deference, or one or two outside preaching to a couple of the locals.

I'm happy to report, though, that there are a lot of citizens of Ancient Greece whose only job is to be a very, very good boy... 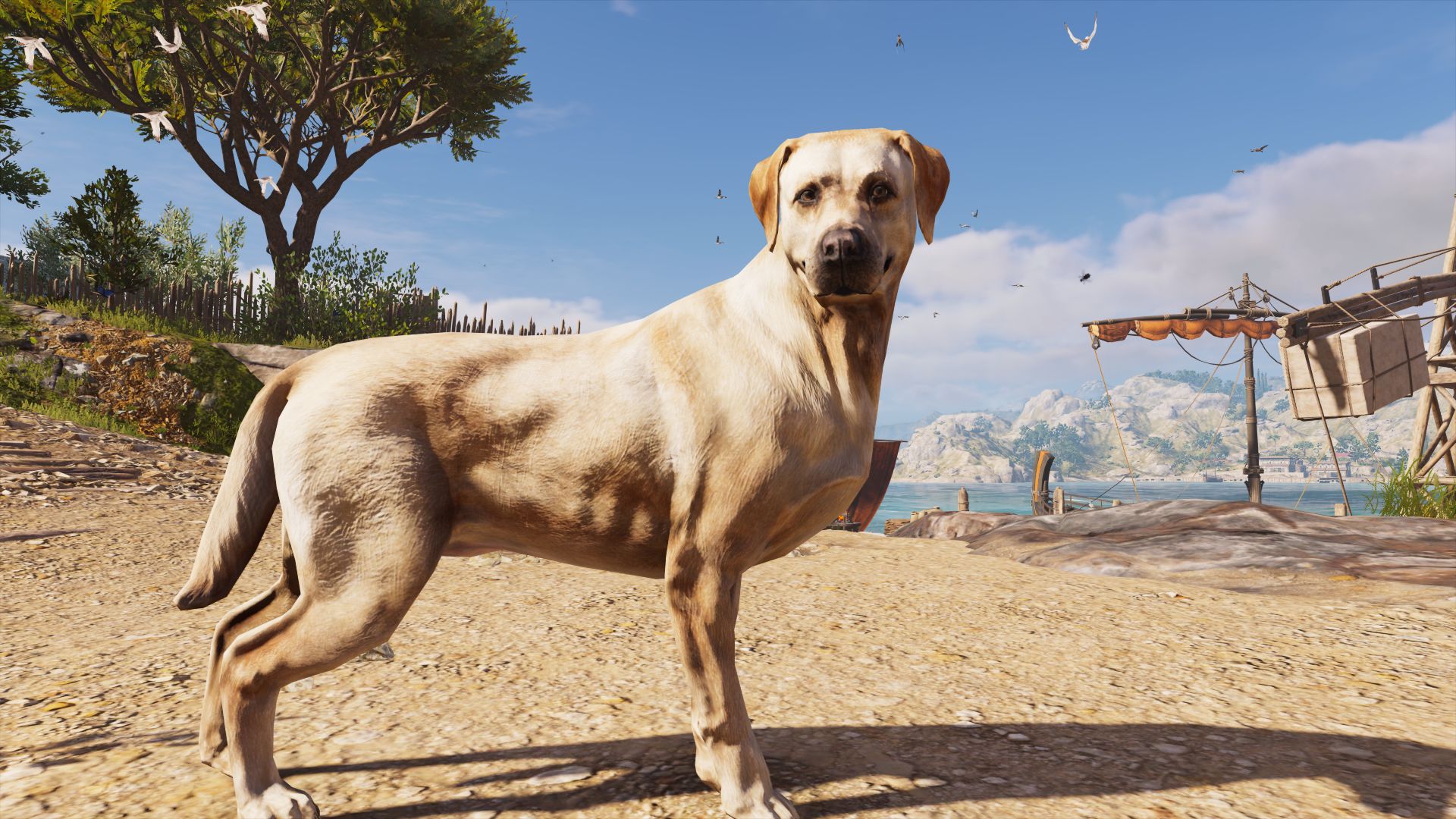 ... and they are all tremendous at it.