Adata's XPG line may be better known for its RAM and SSDs, but their first Cherry MX gaming keyboard sure knows how to make a good first impression. Not only does it have a wonderfully tactile volume wheel in the top right corner, but it also comes with a plush, detachable wrist rest that snaps onto the lower edge of the keyboard thanks to some handy magnets. In fact, I reckon my hands haven't felt this comfy since our best gaming keyboard champ, the Fnatic Streak, arrived on my desk over a year ago. Does the XPG Summoner have what it takes to dethrone the Fnatic? Here's wot I think.

Priced at £115 (US pricing TBC), the XPG Summoner is very much in the same ballpark as its £100 / $110 Fnatic rival. However, whereas the Streak is only available with Cherry MX Red, Brown and Silent Red switches, the XPG Summoner comes in Cherry MX Red, Blue and Speed Silver variants, giving you a few more flavours of linear switch to play with depending on your preference.

I was sent the Speed Silver version for review, whose switches are meant to be a wee bit faster than regular Red ones as well as a fraction quieter than your standard Blues. According to the internet hivemind, Silver switches are generally regarded as being better for gaming than typing up long word docs (the latter of which is where Blues tend to excel due to their higher levels of tactile feedback), but on the whole I found them to be equally good for both. Sure, their shorter travel distances meant I sometimes made the odd mistake here and there when using it for work, but it didn't slow down my overall typing speed, and I wasn't constantly second-guessing myself when typing very quickly, either. 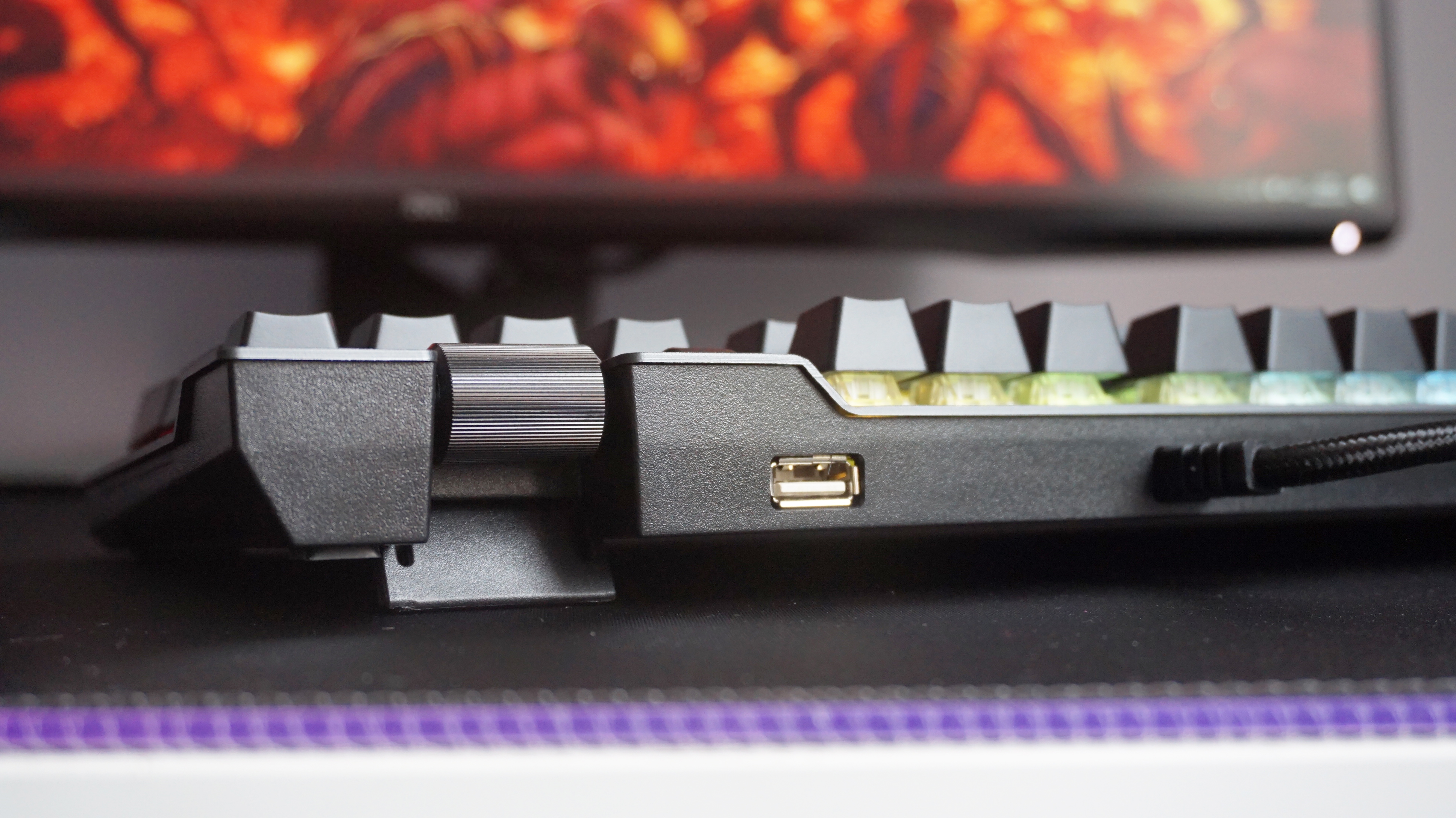 They're still too loud to use within earshot of other people, though - unless, of course, your family / significant other also likes the CLACKY CLACK sound of mechanical keyboards, in which case you're probably at a significantly lower risk of having something chucked at your head in order to keep the noise down.

Still, noise levels aside, the XPG Summoner has a pretty large feature set for a mechanical keyboard of this price, putting it right up there with some of the very best gaming keyboards you can buy today at this kind of price. As well as the aforementioned volume wheel and detachable wrist rest, I was also pleased to see it supports USB passthrough for your mouse, allowing you to cut down the number of wires trailing down the back of your desk.

The Fnatic Streak has all of these features too, admittedly, but the one thing you don't get with the Streak is any replacement key caps. The XPG Summoner, on the other hand, comes with nine of them (the WASD, arrow and Windows key), as well as a key cap puller bundled in the box to lift off the existing ones. I must admit, I could probably do without them all being bright red, although this is presumably to a) match the Summoner's red LED backlight, and b) make them stand out compared to the sea of black and grey on the rest of the keyboard. Still, it's great to see them being included, and it adds a little more value to the XPG Summoner compared to its similarly priced rivals. 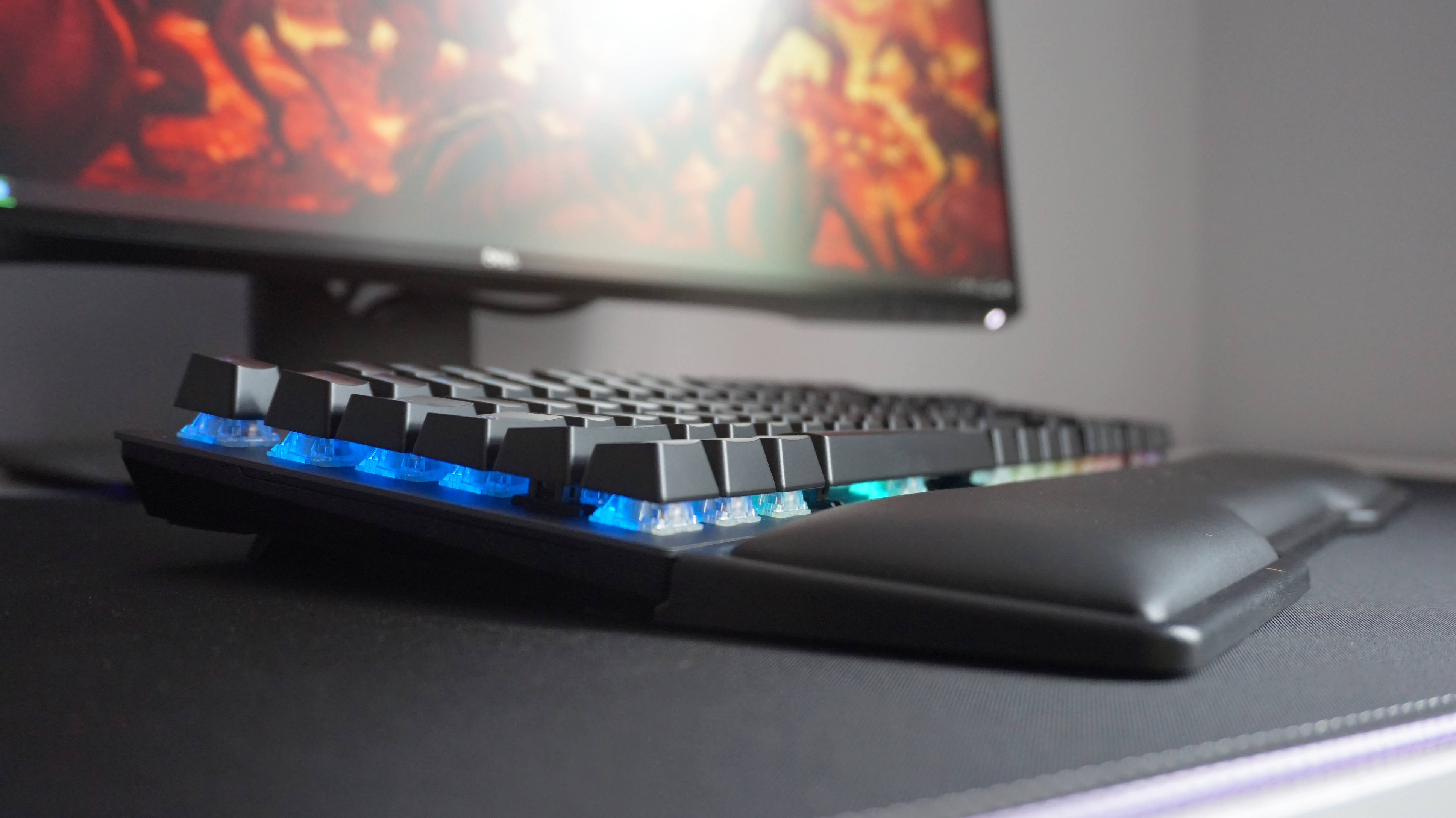 Speaking of its grey aluminium and black plastic chassis, though, it's definitely one of the more industrial-looking keyboards I've tested in recent months, which may or may not be your particular cup of tea. Personally, I much prefer the smooth, curved edges of the ultra compact Streak compared to the hard, bulky lines of the Summoner, but at least the rest of it is still fairly inoffensive. Its RGB lighting doesn't bleed out too much from beneath the key caps, for example, and the only other adornment is a silver XPG logo above the arrow keys.

Another thing that's likely to split opinion is the fact that there's no accompanying software with the XPG Summoner, so you'll have to pay careful attention to its quick start guide if you want to make use of its five macro keys (mapped to F1-F5), switch to another of its seven RGB lighting profiles, enable its gaming mode or switch on its full N-key rollover support.

Thankfully, it's all relatively straightforward, as the respective keys you've got to press and hold down are all laid out in very clear, easy-to-understand instructions, but let's face it, trying to do this sort of thing by eye with only blinking LEDs and timed key presses at your disposal is still a much bigger faff than performing a few simple clicks with a bit of software. Plus, it means the Summoner isn't nearly as flexible as other programmable keyboards. The Fnatic Streak's OP software, for example, lets you program all twelve of its Fn keys, and rebind any key on the keyboard.

Still, provided you're willing / confident enough to spend a bit of time mucking around with the Summoner in this way, there's still a lot to like here. I much prefer it to the similarly-priced (and wrist rest-less) Corsair K70 Lux RGB, for example, and it's a lot less gamery-looking than the MSI Vigor GK80 as well.

Personally, I still think the Fnatic Streak is the superior keyboard here, if only because it's easier to customise and has a lovelier overall design. Sure, you don't get any replacement key caps with it, but you do get an equally gorgeous volume wheel, USB passthrough and a super comfy wrist rest just like you do with the Summoner. Plus, the Streak is also a bit cheaper at time of writing, costing £100 / $110 as opposed to £115. However, if you're a dyed in the wool Cherry MX Blue / Speed Silver clacker and you don't mind a chunkier, more industrial-looking keyboard, then the XPG Summoner is well worth a look.