17 years a games journalist. I was there for the reveal of Half-Life 2, the comeback(s) of Deus Ex, the splendour of Spelunky, the rise of Plunkbat and that horrifying time that grown men wept when they heard they could hold two guns at once in Halo 2. And yet here I am, very probably more excited than at any other point in my ridiculous career, because I'm looking at screenshots of truckstops in Oregon.

American Truck Simulator, bliss-out game to end all bliss-out games, is gearing up to welcome us to its next state, and its greenest one yet. I am so ready for Oregon.

On the one hand, I feel it's high time for a significant step forward in both how ATS and its near-identically-blooded cousin Euro Truck Simulator look and the possibilities they offer. On the other hand, the simply of fact of the landmass Oregon will add to the existent California, Nevada, Arizona and New Mexico is irresistible. 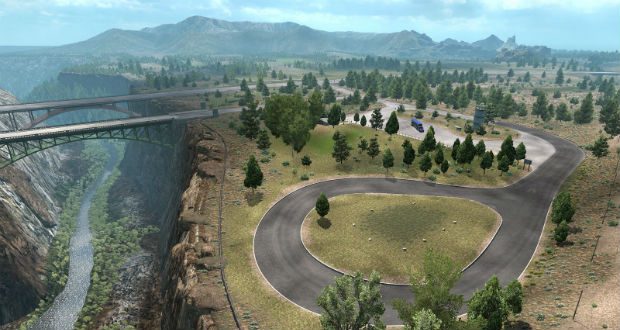 The thought of how long I'll get to spend on a single journey, the extent to which the landscape will morph during it, the delightful and terrifying local radio stations I can switch to (if I put in the simple behind-the-scenes legwork) as I cross state lines... Oh, and the simultaneously thrilling and maudlin nowhere places I'll get to lay my driver's weary head/empty their swollen bladder.

That's what developers SCS are showing off today, in a gallery of new landscape shots that suggest the devs' understanding of what constitutes road movie Americana is continuing to refine itself. I don't know any of these places, but I feel like I've been to everyone, in a dream or a film or a dream of a film.

"There are some quite notorious truck stops in development," the devs claim, although I suspect that, tragically, this does not mean they're adding midnight parking lot stabbings to the game. I can totally imagine that happening here, in what is very much my favourite of these shots: a sad patch of a gravel in the middle of nowhere. Such is the life of the pretend trucker. 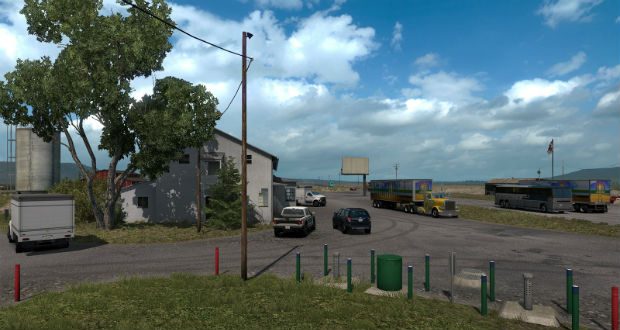 As is the long-time ATS wont, these shots aren't wholly representative of the in-game experience: in big rig practice, you can't really go off road, some of these camera angles are, even if theoretically possible, entirely impractical, and the anti-aliasing isn't really up to snuff. But, from past experience, they give a general sense of how Oregon should look. Of course, what I'm really holding out for is the ability to get out of my cab and take in the finer detail of these wonderful, romantically bleak places.

Adam (come baaaaaaaaaaaaaack) and I chatted to some SCSfolk about such possibilities, and more, at Rezzed last month - do give that a watch if you're interested in the exciting-sounding future of ATS and ETS2.

There's no release date for ATS: Oregon just yet, but I reckon it can't be too far away now. My embarrassing plastic steering wheel is ready and waiting.