After that rather disastrous outcome, Anthem's second mission begins immediately and introduces us to Owen - your character's designated Cypher. He's adorable, but his mind is definitely set on being a Freelancer. We'll guide you through this second mission, giving you advanced warning of the stuff to come - including a cataclysm event you must stop.

In order to complete the missions in Anthem, you'll need all the intel for all of your Javelins, as well as the stuff that's not as well explained in the game. Head on over to our Anthem guide hub for various guides on the ins and outs of the game. You can also head back to the Anthem Missions hub to find the mission you are looking for, or get intel on the previous mission: Anthem Silence the Heart of Rage. 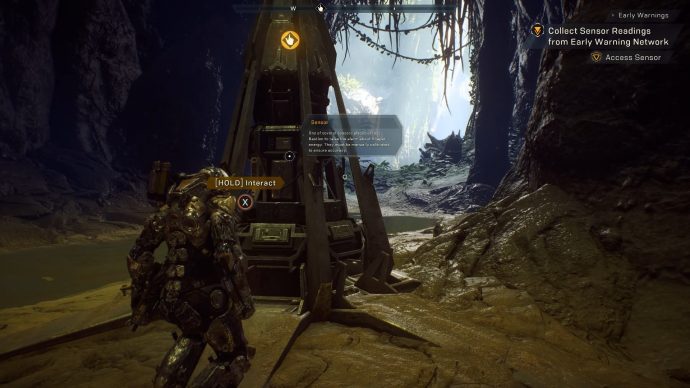 The first step here is to check on an Early Warning network. Unlike the previous mission, you're now able to fly. This does take some getting used to, so make sure you keep an eye on the gauge at the bottom so it doesn't overheat. Avoid flying near the lava if you can as this will build the heat up faster. Once you reach the relay, activate it. You'll then need to head towards one of the sensors, so follow the waypoint through the cave. You'll then need to stay nearby in the highlighted zone so that Owen can get a reading.

As you do this, some more Skorpions. Since you're in exactly the same Javelin as before, you'll be able to use the same abilities as the previous mission. If the Skorpions get too close, they'll interfere with the signal and your overall progress, so destroy them. Stay close to that the signal is boosted as high as possible and wait until the "Scanning" bar is full to complete the objective. You can see both of these in the top-right hand corner of the screen. 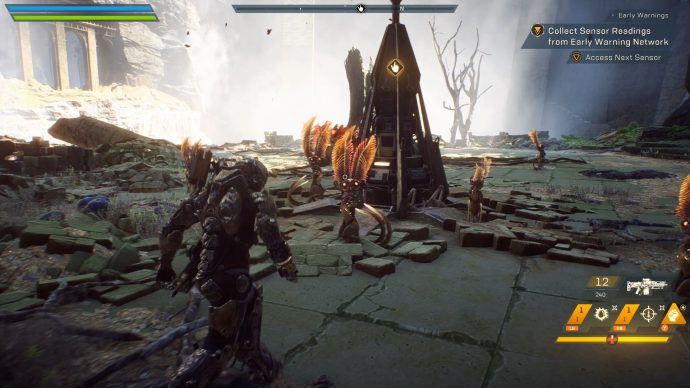 After completely scanning the sensor, you'll need to fly to the next objective. Water is your best friend, as passing through waterfalls completely cools down your suit. Diving underwater is also a good way to cool off, while flying close to water can reduce the rate that heat builds. Through the waterfall is your next sensor. Head there and activate it. You'll see some adorable alien bunnies surrounding it, but these are not hostile. Just activate it and stay close. You'll notice that the birds and critters will disperse after a loud noise. Owen will inform you of possible Shaper activity, so head to the third sensor. 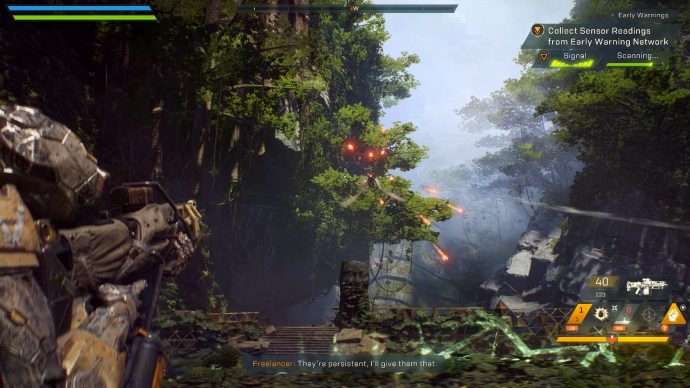 As you arrive at the third sensor, you should be able to see some flying creatures. These are Wyverns and they can breath fireballs. Take them out if you want to start the sensor safely. If you're ever hit by their fireballs, you will overheat, meaning you won't be able to fly. Overheated Javelins can still sprint and dodge, so use your mobility to dodge the flames. Activating the sensor will prompt more Wyverns to descend on your position, so take them out as best as you can. Upon completing the scan, Owen will inform you of a relic that's showing some activity - not a good sign. 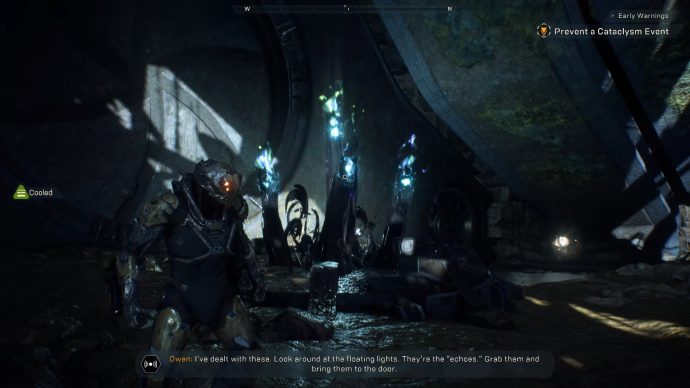 Fly into the water below and enter the cave. You'll see a sealed door and a contraption. To unlock the door, you'll need to collect some floating lights - echoes - and bring them to the contraption. Owen points out that the Javelin can hold three at a time, so touch three of them and walk to the door for them to automatically do their work. Three of these echoes are within touching distance, but you'll need to explore every part of the room to unlock the door. None are back through the water, so don't head backwards; instead look high up for the two you're probably missing.

Once you've got them all, head back to the door and it'll open. Follow the path by flying through the rings. You'll then see a room with jets coming towards you. To quickly avoid these, you'll need to perform barrel rolls (even if that's technically an aileron roll) to ensure your engine doesn't overheat. Don't worry if you miss, you'll respawn back at the beginning of this section. Drop into the hole and your flight controls will be disabled. After a brief scare, you'll be able to fly to the relic. 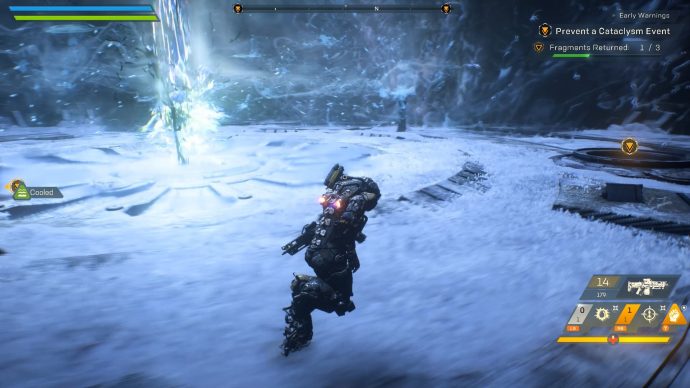 You'll once again need to collect some echoes:

Once you've delivered them, the relic will go berserk. This is the beginning of the cataclysm event that you now need to prevent. Frost Elementals will begin emerging from the epicentre, so take them out before they get too close. If they explode, they will freeze you. There are also some Wolven - alien wolves - that appear through the cataclysm portal that need to be killed. Three fragments will be highlighted, so pick one up and pop it in the pedestal indicated. More Wolven and Frost Elementals will appear to try and stop you, so keep attacking them with all your arsenal.

After placing your third fragment, the mission will be over and you'll see what happens when a cataclysm closes on an emerging enemy. It's not pretty. You'll then be taken back to Fort Tarsis, where you can finally customise your character. Head to the waypoint indicated to have a face-to-face conversation with Owen, before heading back to the Javelin. You're then interrupted by Owen, who got a message from you to meet you at the Javelin. Turns out it is Tassyn - a Corvus agent - who has a contract for you to find a Anthem Lost Arcanist. She sweetens the deal by giving you the choice of new Javelin - which our Anthem Javelins guide can assist in your decision making.

A reminder that if you wish to just head back to the Anthem Missions hub to find tips for a specific mission or side-quest, you can do so. There's also intel on the previous mission: Anthem Silence the Heart of Rage.