Anthem throws you into the deep end by having you take on the threat to the Heart of Rage - what is the catalyst for the Critical Objective missions in Anthem. This mission does serve as the game's tutorial, but we'll also provide intel on what you need to do to finish this mission relatively unscathed.

In order to complete the missions in Anthem, you'll need all the intel for all of your Javelins, as well as the stuff that's not as well explained in the game. Head on over to our Anthem guide hub for various guides on the ins and outs of the game. You can also head back to the Anthem Missions hub to find the mission you are looking for. 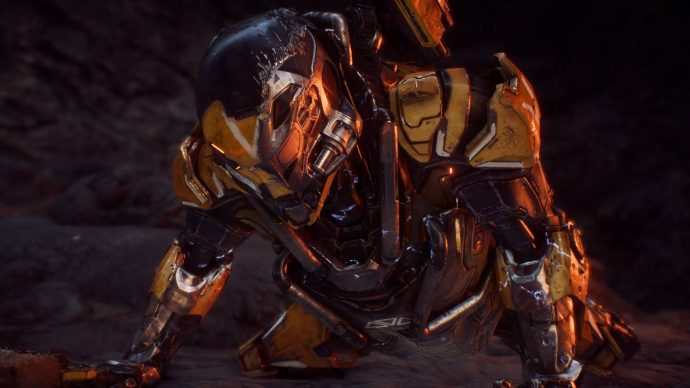 You'll begin the mission having just been knocked to the ground. This is where you'll be able to decide if you're male or female, so make your choice. Customising your looks will come later on. It's worth noting at this stage that the suit you are occupying is the Anthem Ranger Javelin, along with its most basic gear - Frag Grenades and a Missile. Once you regain control of your Javelin, head towards the waypoint. You won't be able to fly at this stage, but you can run and jump. Use that to leap over the lava pit and reach the repair pack. Use it to restore your health a tad, double jump over the cliff, and sprint to the next objective marker.

There is a wall blocking your path, so shoot it to blow up the wall. Through the cave, you'll come across your first wave of enemies - Skorpions. They're not too difficult to defeat, but this is a good opportunity to see what the Ranger Javelin can do. Pop you ultimate ability and look to the left to find your enemies. Once you've taken them out, head to the next objective. 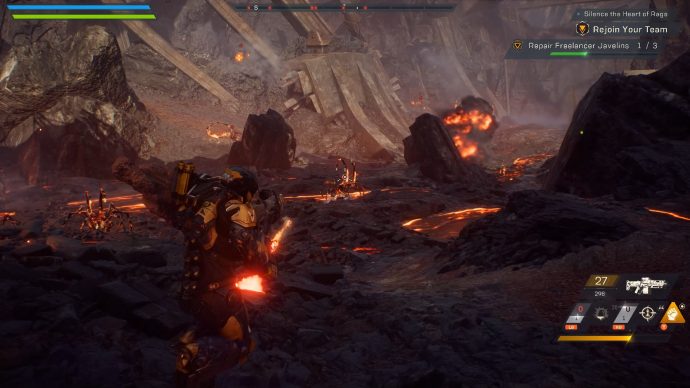 It seems that you may have gotten here a little on the late side, but it's not the end of the world - yet. You'll be attacked by more Skorpions until you rescue the three Freelancers. To do this, head up to them and hold the revive button indicated on screen. Look around for more icons on the screen to show the downed Freelancers scattered in the area. This is the same icon used to note when a friendly player is downed as well, so keep a mental note of what it looks like.

Once you've rescued them, a Titan will blow up the path to your next objective. Head down there and leap across the platforms. You'll find some more Skorpions in the way, though it is optional whether you decide to kill them or ignore them on the way to your team. Getting close to the objective will reunite you with your team, where you make a rather catastrophic discovery. This mission is now over and after a few cutscenes that explain what happened during this tragic event, you'll be thrown into the next mission: Anthem Early Warnings. Beyond this point in the game? If so, check out the Anthem Missions hub to find the mission you are looking for.