Anthem's Javelins are the equivalent of other game's classes. They're wildly different from each other, with some focused on melee attacks or single target abilities, and others that excel with crowd control. This guide goes over the four Javelins, with some general tips for each and all the abilities. It also highlights how to unlock them and how to make their quality as shiny as possible.

Are you still looking for help with missions, or how to get to grips with navigation in Anthem? Be sure to check out our Anthem guide for everything you need to know about Bioware's latest space adventure. 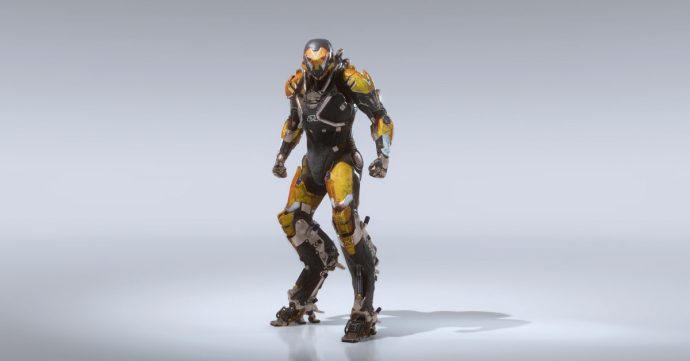 The Ranger excels at targeted fire on single targets, but is also a jack-of-all-trades. You can kit out the Ranger with various different types of grenades, as complete with variants for the Assault Launcher. Its support gear generates an area of effect to either protect allies against damage or amplify damage dealt by your friends. They're also quite mobile with a double jump as their jumping type, useful for retreating after their melee attack primes enemies for using gears to detonate. 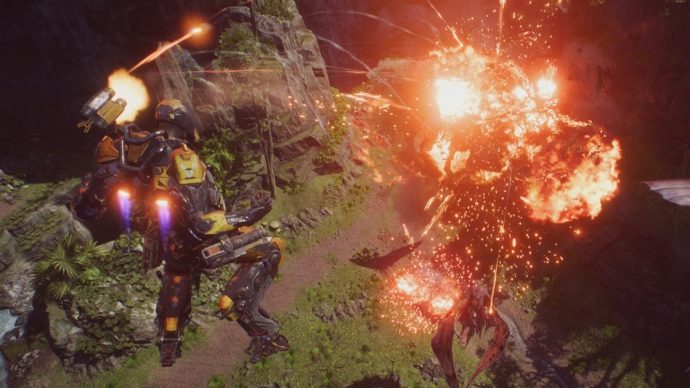 As mentioned, there are two types of ability that the Ranger has to offer: Grenades and the Assault Launcher. Both can be altered with different kinds of modifications and different rarities have different buffs associated with them, so keep cycling through to find the best ones to suit your play style. There are also legendary and masterwork variants that you can learn in our Anthem Masterwork gears guide.

A DPS build that doesn't really focus on crowd control or have any defensive options, but it can at the very least deal lots of raw damage. You'll be using Venom Darts and Grenades against single targets. This build also gives you frequent ultimate attacks as often as is possible. Your grenades are key to this, as they bolster your ultimate gauge by 700% of the normal charge per hit, so detonating a grenade in proximity to a large number of enemies at once can instantly refill your ultimate ability.

Here are some tips to let you know how best to play as the Ranger, as well as the kind of role you'll be playing when part of a full set of Javelins. 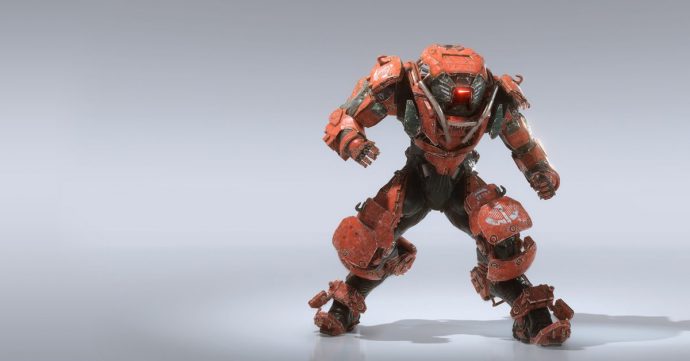 As the tank of the squad, your main role is to ensure every enemy's attention is primarily on you. This means attacking multiple targets at once with your weapons and skills. When their attention is on you, the Colossus offers a shield to protect yourself against incoming damage, while rocket propelled jumps ensure you can get out of the way of the most devastating attacks. 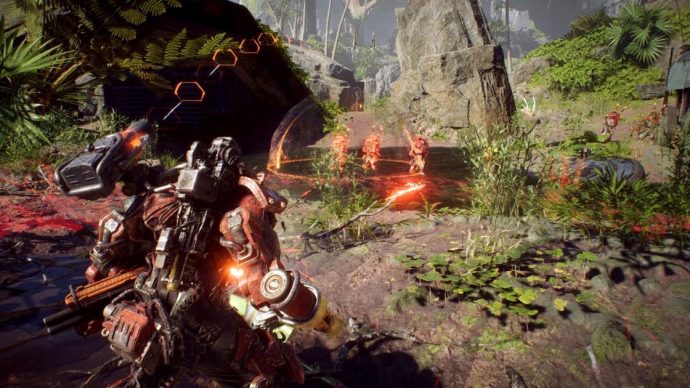 With the tanking abilities of the Colossus, the main abilities are the Ordnance Launcher and Heavy Assault Launcher. Both have different kinds of modifications and different rarities have different buffs associated with them, so keep cycling through to find the best ones to suit your play style. There are also legendary and masterwork variants that you can learn in our Anthem Masterwork gears guide.

This build is more of a tank build, with the grenade launcher and Best Defence gear doing the bulk of your healing. The Voltatic Dome however does freeze enemies to the spot, so try to get a group of them in one place before raining down explosives to top your health up. The components on the other hand are focused around dealing as much damage as possible to multiple enemies, and complement each other well.

Here are some tips to let you know how best to play as the Colossus, as well as the kind of role you'll be playing when part of a full set of Javelins. 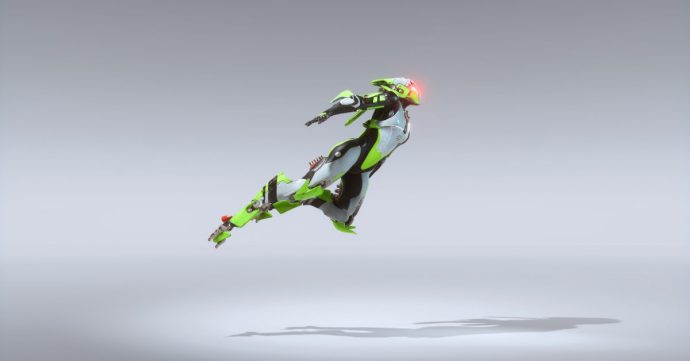 Those that choose the Interceptor don't want to be in the frey of combat for too long. They jump in and pick off one target, before escaping any possible retaliatory attacks. This is done with their Triple Dash defensive move, as well as the Triple jump, enabling them to stay on the move at all times. They do however have the lowest shields of the three classes and aren't as effective against large groups of enemies. Therefore, a stationary Interceptor is a dead Interceptor, so try to always be on the move. 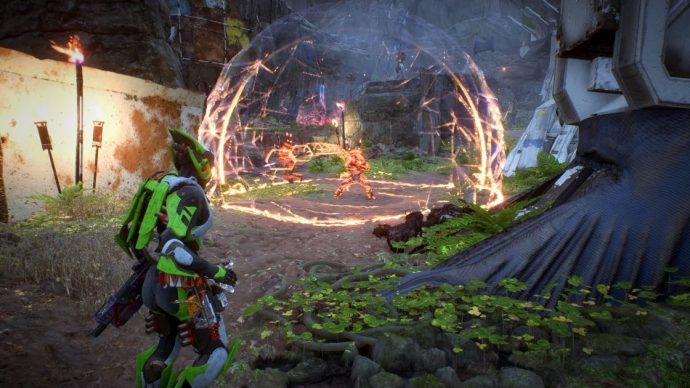 To deal as much damage to any target as quickly as possible, the Interceptor has access to Assault Systems and Strike Systems. Both have different kinds of modifications and different rarities have different buffs associated with them, so keep cycling through to find the best ones to suit your play style. There are also legendary and masterwork variants that you can learn in our Anthem Masterwork gears guide.

As mentioned above, the Sudden Death variant of Tempest Strike detonates a fire explosion, so you'll be throwing venom bombs into groups of enemies before detonating them with a swift kick. The components all seem to have a great amount of synergy with each other and kick in when you use a melee attack, so this is primarily a melee build. As for the weapons, they're a pistol that gains a bonus at melee range and a shotgun that's always good at close range.

Here are some tips to let you know how best to play as the Interceptor, as well as the kind of role you'll be playing when part of a full set of Javelins. 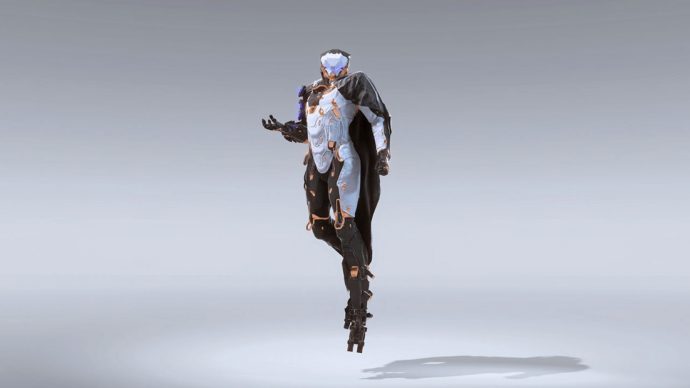 This "techno-mage" will primarily use their gears to dish out pain to many enemies at a time. This involves using area of effect attacks, infused with fire, ice, or lightning elemental properties, to set up enemies for teammates to detonate. Of course they can detonate enemies themselves, but they're a great combo piece with the Colossus. Therefore, if you're in a group, your main role is to use Priming attacks to coat enemies in various elements. It's a strange blend of a raw damage and a support class in this regard, with its combo effect enabling your allies to deal even more damage to foes. It has access to hover, as well as a blink or teleport to get out of danger. 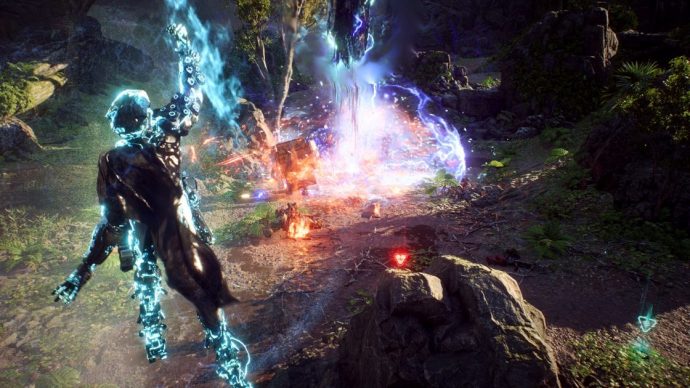 The Storm doesn't really target enemies specifically, but rather the area around them. Those who wield this Javelin have access to the Blast Seal and Focus Seal, which can be augmented with different modifications, so keep cycling through to find the best ones to suit your play style. There are also legendary and masterwork variants that you can learn in our Anthem Masterwork gears guide.

This build is an AOE build, meaning you're rarely going to be using the guns unless everything's on a cooldown timer. While I've detailed above why the two gears are a great combination, the components also augment your abilities to the point where you're getting the maximum benefit out of them. Bonus damage, reduced cooldown, and the like. Some do take away a small proportion of your damage to bolster cooldown rates, but they're offset by other weapons, gears, and components, thus mitigating that downside.

Finally here are some tips to let you know how best to play as the Storm Javelin, as well as the kind of role you'll be playing when part of a full set of Javelins. 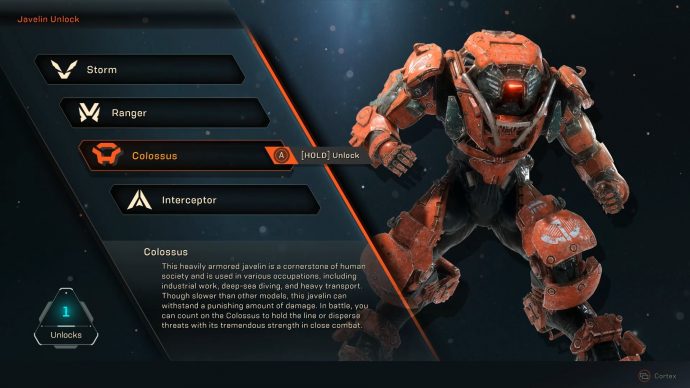 How to unlock the Javelins

Javelins are the main classes in the game and they have their own specific purposes in a full team of Freelancers. With four on offer, it can be a little daunting to know which one is going to have a play style you'll like, even from the brief descriptions you're given.

Quite simply, the requirement to unlocking all of the javelins in the game is to meet certain thresholds in pilot level. How it works is that instead of unlocking specific Javelins as you progress, you are initially given a trial run with the Ranger javelin before being given the choice to unlock one of the four Javelins: This can be done by completing missions (more on that in our Anthem Missions guide), contracts, and other tasks that are set for you in Fort Tarsis.

Once you've completed the second mission in the game, you'll meet Tassyn, who will set you a mission in exchange for the ability to unlock a new Javelin for yourself. Now you have a big choice here as your next choice doesn't come for a while. I'd highly recommend looking at the individual guides for each of the Javelins so that you have a better idea of what each of them specialises in.  So without further ado, here are the levels in which you are given the option to unlock a new Javelin: 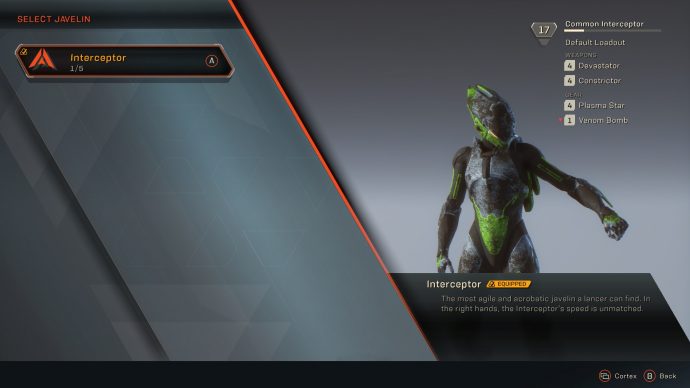 Once you have obtained a second Javelin, you can then switch between your unlocked Javelins by heading into the Forge at Fort Tarsis. In that menu, there is an option to choose a new Javelin loadout. For each Javelin, you can save up to five different loadouts for any given situation, combination of gears equipped, and more. Once you've saved the loadout, you can easily choose it from this menu rather than have to reconfigure it for each time you'd like to change it. 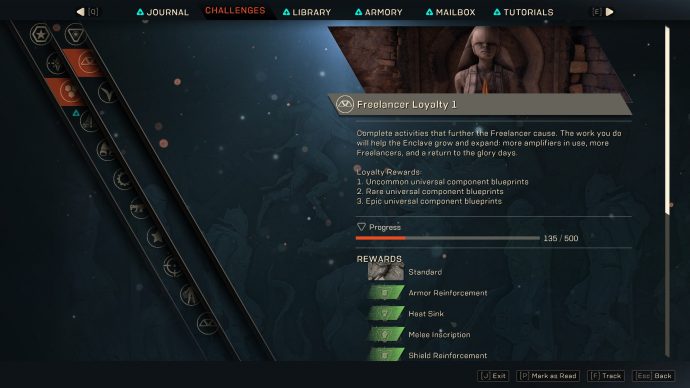 While you're in there, you may wish to change the colours and finishes for your Javelin. While you have the default pieces that are perfectly good, or if you happen to preorder the game, you may also have the Legion of Dawn set (more on that in our Anthem Legion of Dawn guide). Other cosmetic parts can be purchased for gold by going into the part, vinyl, or animation, and tabbing across to the "Buy" section. Each one costs gold. The only two that aren't available to purchase are both paint and wear state.

You may have noticed that your Javelin looks somewhat scruffy. Rather than gleaming in splendour, it looks beaten up, about to fall apart at the joints. This is all tied to your reputation with the Freelancers and the further you upgrade your standing with them, the better your armour can look. Head to our  guide, to learn about the requirements for unlocking the higher ranks. This is also how you unlock paints and finishes to use on your Javelins.