Loadouts in Anthem will be the basis of character progression. Yes there are pilot levels that put a number to it, but it's definitely more of a game where your items indicate just how good you are. This means crafting, and optimising your loadouts, so that they have the best perks for your Javelins. This guide goes over Javelins, the slots that they have, and some details about the item rarities.

Looking for help with missions, or how to get to grips with navigation in Anthem? Be sure to check out our Anthem guide for everything you need to know about Bioware's latest space adventure. You can also look for more in-depth information about the legendary and masterwork weapons in our Anthem Masterwork items guide. 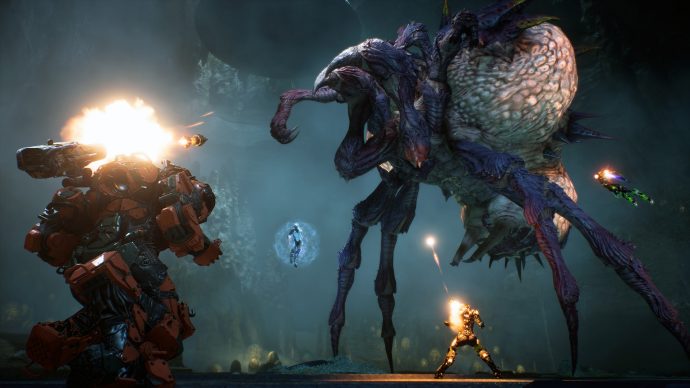 Beginning the game, you only have the Ranger Javelin to use and you don't have all of the gear slots. Completing missions is the way to not only unlock the other Javelins, but also the gear slots associated them. Once the game is released, we will be listing the quests you need to complete in order to obtain them.

Javelins can use certain types of weapons as well. The Colossus can use the minigun and grenade launcher, but not the pistol or SMG. All other classes are the opposite of the Colossus in that respect, but all can use rifles and shotguns. Of course there will be some weapons that are more advantageous to use with a Javelin than others, but we will be discovering that along with you all when the game is launched.

Each Javelin has the potential to equip multiple weapons, components, gears, and ultimate power slots. Offensive gear refers to your skills, which can be upgraded as you progress through the game. Gears come with different bonuses, but you can only equip one type of gear per slot, each has five different skills that you can use. Support gear on the other hand refers to a special defensive skill that aids your teammates, of which you have a choice between two. Weapon slots are simply just different weapons, each again with different perks permanently attached to them, while components add perks to your Javelin, and ultimate power's enable a devastating attack. The full list of what you can equip per Javelin is below:

Each weapon, component, gear and ultimate power you obtain comes with a few bonuses that can make other gear better. A good example of this was a Masterwork version of the Ranger skill "Venom Darts" shown during a live stream, where three of the perks are related to weapon damage and the fourth increases the total ammo you can have at any time. When the game is released, the best perks for each Javelin will be discovered during the game's lifespan, so do check back to find out which combination of perks work best with the combination of choice.

Items are the other big thing about your loadouts. You obtain them either via missions, strongholds, and contracts; or by crafting them - details on the latter in our Anthem Crafting guide. Items can come in the following rarities:

One interesting thing is that items have three stats: Damage, recharge time, and elemental status. While the first two are pretty self explanatory, the elemental status can be applied to just about every weapon, so you can even have an Acid based flamethrower.

There will of course be more details on loadouts as more becomes known about what the best ones are. Aside from character progression, there's also a lot of interaction with the world of Anthem. Our Anthem Factions guide goes over how you can give your character more items to use to bolster their loadouts, while better loot can be discovered by looking at our Anthem's Anthem Endgame guide.