Tassyn has a lead, but says that you're going to need some backup. That backup, your avatar thinks, should be your old friends from back in the Heart of Rage incident. You've grown apart since then, but it's time to get the party back together. Here is the intel on how to get inside the camp. 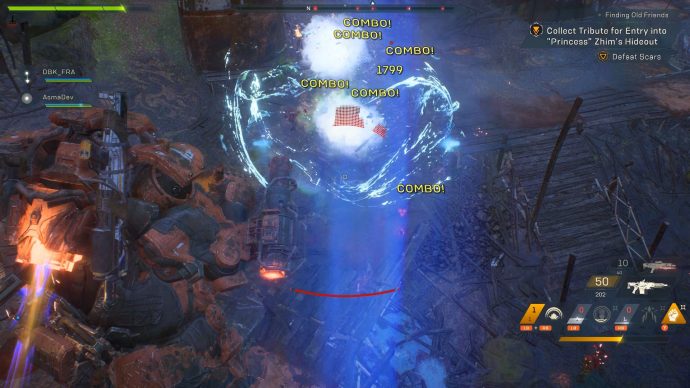 In order to gain access to the hideout, you'll need to organise a tribute offering for "Princess" Zhim. Head towards the Scar camp and kill everything you see there. There will be many of them, so make sure you're prepared going into this mission with up-to-date gear. Reinforcements will come in, including a couple of Enforcers, but you should by this stage know how to take them down quickly with the use of acid and fire gears. Once they're all gone, look in the weapons cache using your radar to find the first tribute item.

Owen will then ask you to collect some relics from the Scars that they stole from Zhim. Prioritise the towers first as they can eat through your armour/shields really quickly. As for the location of the relics, the camp is multi-tiered so you'll find the relics on the edge of one of the many ledges. It's a short platform, so may take a while to find. Owen will then mark the final tribute on your HUD, so fly there. 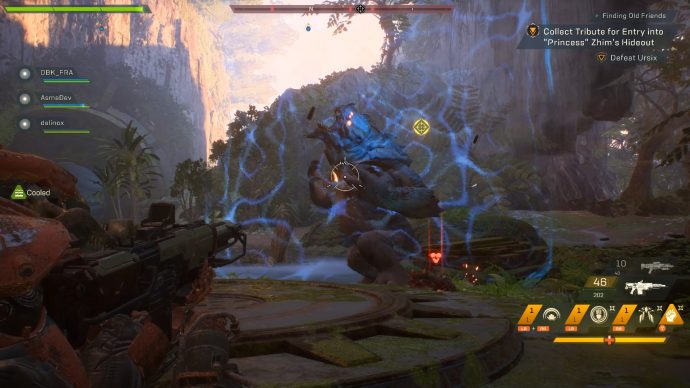 That final bit of tribute is an Ursix. Apparently it's a delicacy. These are much bigger than anything you've fought in the past and this one is surrounded by some Scar. Kill all the Scar Scrappers with your regular guns, before unleashing all the gear skills you can muster onto the Ursix for a quick takedown. It's classed as an armoured enemy, meaning that fire and acid skills work very well. Ice and lightning skills however aren't as effective.

Now you just need to get to Zhim's hideout. Fly through the blue portal thing indicated on the map. They're not really shortcuts per se, but they do instantly empty your overheating gauge. You shouldn't come across any resistance between this point and the hideout, so make it there to trigger a lengthy cut-scene where you reunite with Haluk and Faye. 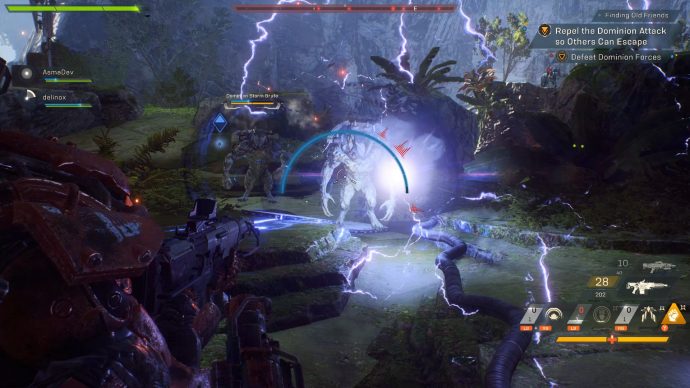 Surprise! Dominion forces are here to crash the party and it's not just troops they have. They've tamed Wolven in the past, but they now have "Storm Brutes". These are slightly large creatures that can fire off electrical charges to electrocute their enemies. These are highly dangerous and have a combination of shield and armour. Use ice and lightning to rip through the shields, while acid and fire attackers should tag in once their shields are stripped. Faye and Haluk will then request assistance back at their Strider, so head down there. More Dominion, including their variants on Storm lancers, are at the Strider, so take them out. During the fighting, Owen's freelancer will go down, so repair him to complete the mission.