Matthias of the Arcanists has a hunch about some Elysian manuscript. He now wants you to go out into the field to recover it, following the clues that will lead you to its resting place. The manuscript is well defended however and it will take a full group of you to come back alive. 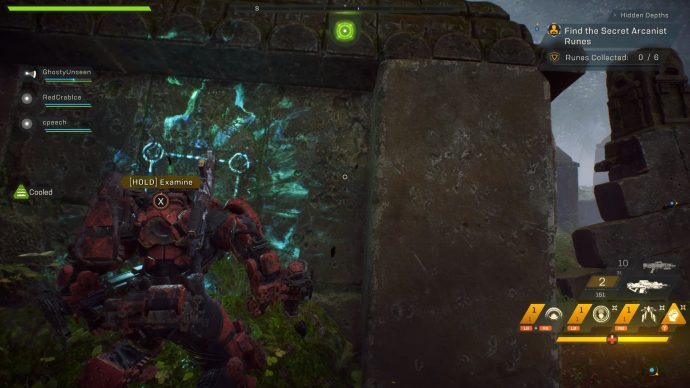 Head to a big set of ruins nearby. You'll be asked to find some runes in the area, so clear the area of the Anrisaur before finding the runes scattered around the area. There are six in total and you can find their locations by using the radar. They're the glowing green murals on the walls. Flying to the next area and collect the five runes there. Some Wolven will be nearby, so take them out, before scanning the runes here too.

The next location requires you to activate an Arcanist marker. Do so and stick near to it to complete the scan. Skorpions will come to the area, including the explosive "Workers", so keep firing at them without letting them get too close. There will also be some Elite variants of these enemies, so just be wary as you defend the point. 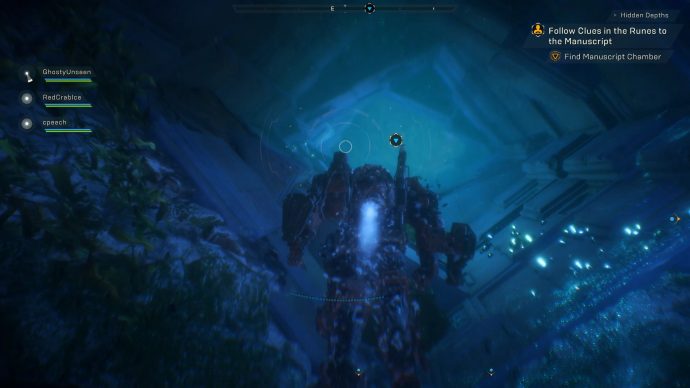 The scan will reveal the existence of a chamber, containing the Manuscript. Head there now, making sure to take the plunge into the nearby pool. There's a tunnel nearby, so swim through it. You can feasibly drown here, but you have plenty of air. When you emerge, you'll be in an underground cavern with some interesting architecture. Travel through the loading zone to access the next main area.

Heading further in, you'll be ambushed by some more Skorpions. Again, focus on the legendary and elites if you can as they'll deal the most damage. Once they're down, push onward to reach a door puzzle. You'll see a number of these throughout your journey into Anthem, but these are likely your first encounter. The symbols correspond with nearby images, which in this particular case include a star-like image to the right. This means that the right pedestal must be star. The second image is at ground level and is a triangle. Once both are correctly displayed on the pedestals, you can enter the chamber. 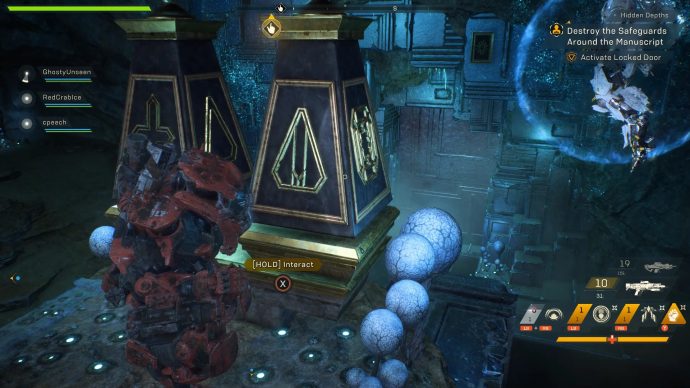 Inside is a rather nasty surprise. This will likely be your first time taking on a titan, a large hulking beast that can produce fire without a single thought. Its weakest points are the openings on its torso and its back, which it will open as it fires lasers. It will also be vulnerable on its hands as it charges up several of its attacks, such as firing balls of flames, summoning Ash Elementals, and throwing out rings of fire. On top of this, Frost Elementals will also join the fight. Defeating the titan should be your primary focus as other enemies will just keep arriving on the scene. Teammates are likely to fall in this match too, so make sure you pick them up when you can.

Once it's defeated, you'll need to solve a second pedestal rotation puzzle. The combination I had during this part, from left to right, was as follows: Octagon, Triangle with decoration in it, Cross, blank Triangle. This will remove the barrier on the chest on top of the tomb, which will contain the Manuscript, completing the mission.

Just a reminder that you can always head back to the Anthem Missions hub to find the mission you are looking for or head back to the previous main story mission: Anthem Incursion. This next bit is... well... tedious. You'll need to find the secrets in our Anthem Tomb of the Legionnaires guide.