Turn-based giant mech argy-bargy BattleTech doesn't officially support mods, but it doesn't officially not support mods either. Though we're denied the ease of clicking a 'subscribe' icon in the Steam Workshop, that ol'Nexus is littered with smart and ridiculous remixes of BattleTech's ten-storey war songs. For the time being, most aesthetic overhauls are ruled out - a great shame, as I'd love to see more diversity of planet and to field a few more luridly hot pink mechs - but digging into the files that control the rules, flow, camera and even the structure of the campaign and missions is not.

I found myself a little directionless after beating the main missions, but wanted a good excuse to start over without repeating myself. Thanks to the below mods - just a few selected highlights from the growing mass of 'em - it's almost a brand new game.

Some of these mods simply require popping a file into the BattleTech install folder, while others require installing either or both the BattleTech Mod Loader (BTML) and ModTek first - instructions for BTML are here and ModTek here. The mods themselves all contain individual instructions you'll need to have a gander at, and many of them can be further customised yourself if you so please. 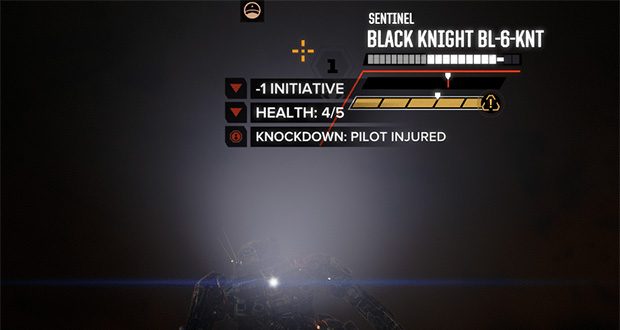 The meta-game of BattleTech is trying to collect every type of mech available, which involves a very particular, and very satisfying, way of playing the game. One of the main concepts there is killing a mech's pilot, rather than trashing the whole hunka hunka burning metal. And one of the main obstacles there is that you don't know how much health said pilot will have or has left (you can generally take a decent guess whether it's 3, 4 or 5 depending on how far through the campaign you are, then it's on you to keep track on how many hitpoints you've already whittled away). This mod, simply put, makes enemy health visible - first to save you the initial guesswork, and then to keep track more easily on a busy field. It's not at all necessary, but it is very helpful in terms of prioritising targets and pursuing the higher goal of Kill The Meat, Save The Metal.

It's great news that the recent, hefty 1.1 patch added much-needed combat speed controls, but I didn't entirely get on with the implementation. Rather than straight-up multiplaying the overall pace of moving, shooting and misc. animations, turning on the option (either globally in settings or whenever the situation/your patience demands it by pressing Spacebar) accelerates everything after a moment, and then decelerates as the action approaches its end. I can see the logic, in terms of ensuring you don't miss the consequences of an action because it's too fast, plus it's arguably more dynamic to watch, but for me it felt oddly jerky and a little bit time-wasting. Some folk really dug, but others felt similarly - including the creator of this mod. Simply, it makes the speed-up constant rather than one that accelerates gradually - but if that makes the whole game too fast for you, the even better news is that this changes the Space-to-speed-up-one-action system to Space toggling global speed-up on or off. Lovely. And with that, no other speed mods are required ever again, I reckon. 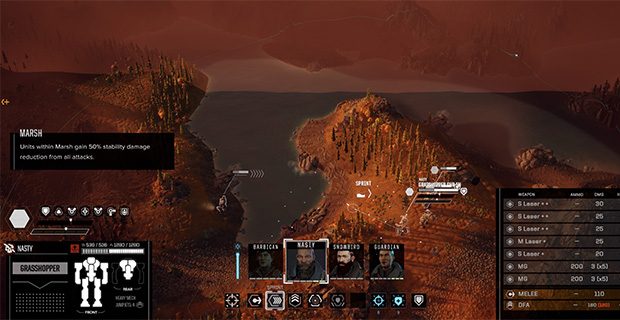 Another of BattleTech's built-in annoyances is that it often decides to seize control of the camera, even if you've got the fancy over-the-shoulder shooting sequences deactivated. This mod restores control to you even during combat, as well as expanding the range of camera angles and zoom available. Clearly with this, there's a lot more scope to end up looking at the wrong thing, but for those of us for whom this is not our first mecharodeo, pushing aside all the mandatory look-over-here stuff is a relief.

The mod has its own presets already, but if you're still not happy, you can edit the .json to further fiddle with the various variables. 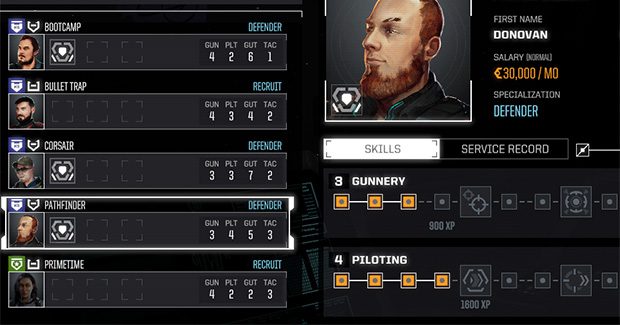 Speaking of folk who've already dashed themselves against BattleTech's rocks once (or more) and lived to tell the tale with an appetite for more, a chance to play again but with different dynamics is delectable. Rather than encountering greenhorn versions of Dekker, Behemoth, Medusa and Glitch all over again, this mod gives you a whole new set of random Mechwarriors - and, better still, a whole new set of Mechs. You can tweak the text file to, say, increase or decrease the number of heavy or light mechs you're allocated, but clearly you can throw the balance out of whack pretty quickly if you gift yourself too many Absolute Units. By default, you get three random Lights and one random Medium, which sounds about fair.

Want your second playthrough to be more challenging, but not in a slightly tedious "every baddie has more hitpoints!" sort of way? This one means that the worse you're doing in a fight, the harder things get. The idea is that pilots are no longer just a set of hitpoints that continue to function perfectly until there are no points left, but instead that taking damage really messes with their ability to steer a 100-tonne metal monster around an alien world. The more injuries a pilot suffers, the more their core stats - Piloting, Tactics and Gunnery - are impacted. In other words, someone whose skull is held together by sellotape and prayer isn't going to enjoy all those targeting and evasion boosts any more. It's hardcore, and massively increases the degree of caution required - especially when twinned with the new, official Ironman mode.

One of BattleTech's most distinctive twists upon turn-based tradition is heat management - the idea that making your mech carpetbomb the landscape with a huge array of heavy weaponry generates an enormous amount of heat. If it gets too hot, it takes damage if it tries to fire again. If it gets really too hot, it shuts down for a turn. It's a great idea but it can become slightly tedious in practice - less like gambling with the elements, more like having to factor in a time out to cool down every few turns. This mod introduces a new, far more dangerous risk factor - if your mech overheats, there's a chance that its ammo will catch fire and explode. I.e. bye-bye side-torso and/or arm, or anywhere else you've haplessly stored your rocket supplies. It sounds like a small thing, but in practice it means a big change in your combat methodology. You're not trying to weigh up whether or not taking the shot is worth the heat bit of damage it'll cause to your mech, you're betting on whether or not it means you'll lose half its arsenal - or even kill its pilot. High stakes BattleTech, this.

It's a little less useful now that the 1.1 patch has reduced the impact having a gazillion savegames made on load times, but this is still a housekeeping godsend. BattleTech makes a hell of a lot of automatic saves, and every time it does it adds a new one rather than overwrites an older one (even one from dozens of hours earlier), which means it's not long before you've got hundreds of the things sat around. Pre-patch, this slowed down loads horrendously, but deleting saves was not an easy matter, and that remains the case now. You have to delete saves one by one, but the game needs a big think about it each time and requires confirmation, while the nature of the Steam cloud meant that deleting everything in bulk via Windows Explorer just saw them all restored moments later. Jury's out on whether or not loadsa saves still affects load times, but certainly it's a nightmare of scrolling if you just want to find a particular old game. This mod removes the confirmation prompt every time you delete an old save - with the exception of the most recent one - so that housekeeping is now so much faster.

Another grumble I had with BattleTech was that there was minimal sense of impact for any landed shot that didn't blow off a limb (or worse). One reason for that is the sound - there are plenty of neat-o stompy, destructo noises to be heard, but things are pretty toned down if a hail of rockets or a level-wide PPC shot doesn't cause a mortal injury. This mod swaps out most of the weapon sounds for more dramatic alternatives, largely sourced from old Mechwarrior games. It sounds so superficial, but it really makes a difference: with it, a BattleTech bout sounds so much like giants unloading the entire contents of a weapons factory at each other, even when their armour doesn't splinter into a thousand white-hot shards. Subtle, but very effective.

If you want to go all-out on having a very different campaign structure, this is a doozy. Rather than planet-hopping with wild abandon as you juggle your efforts to restore an unelected elite to galactic power with making ends meet by taking on random missions, MercDeployments sits you down in one planetary system for a months-long deployment. You're paid a monthly wage rather than a per-mission wage, and a steady stream of missions in that system is generated. Stick it out - i.e. through potentially dozens of missions - until the deployment ends and you'll get plenty of cash and salvage and rep, but if you bail out early you will not be looked upon favourably by whichever faction hired you. It's an extra meta-game within the meta-game, in other words. Individual missions and story stuff remain as an option, but for anyone who really wants the life of a freelance Mechwarrior, rather than that of dutiful serf to a deposed queen, this is a thoughtful remix with a very different flow.

Full disclosure: I've not actually tried this one yet, as it's going to create a snarled-up cat's cradle of crazy effects upon my campaign, and I'd rather give it a go fresh once I've finished my current run. But, for the self-declared BattleTech elite, this might well be worth a masochistic dabble. Despite the name, it doesn't truly transform BattleTech into any kind of a roguelike (though I'd be keen to see a mod that does), but rather it's a collection of other folks' mods, intended to make the game as a whole massively more hardcore, in addition to encouraging more of a hand-to-mouth merc lifestyle with a semi-sandbox structure.

Given all its parts hail from different creators, I suspect it's about as balanced as Daily Mail political reportage, but I do like the idea of an all-in-one package that totally rewrites the Btech experience.