“If I had asked people what they wanted,” father of the assembly line and horrible anti-semite Henry Ford supposedly said, “they would have said faster horses.” As cool as nitrous-enabled horses sound, I think old Hitler-fancier Ford was trying to insinuate that the masses can’t imagine the next technological revolution; they can only think of a better version of what they’ve got.

Maybe that’s why we as a species are so stuck on the concept of mechs: if we think about future warfare, all we can imagine is “BIGGER PEOPLE!”

It’s understandable. Nobody wants to think about the next evolution of guided missiles that kill children when they could be thinking about huge giant metal people that have like, guns for hands and lasers on their shoulders. Much more fun imagining that those metal people can fly. Or, at least, not properly fly, but jump over stuff with rocket boots, and sometimes kick stuff after they rocket jump. And if they could like, punch real good, and when they punch — or after they punch — they shoot the enemies with lasers again.

It was those rockin’, sockin’, shootin’ robots that helped make BattleTech, Harebrained Schemes’ turn-based strategy take on the venerable series of the same name, worth dipping into when it launched last April. Two new DLC packs have been released over the past year since BattleTech’s PC launch, with another scheduled to arrive this winter, and the developer has kept pace with free updates, too, smoothing out the overall experience. 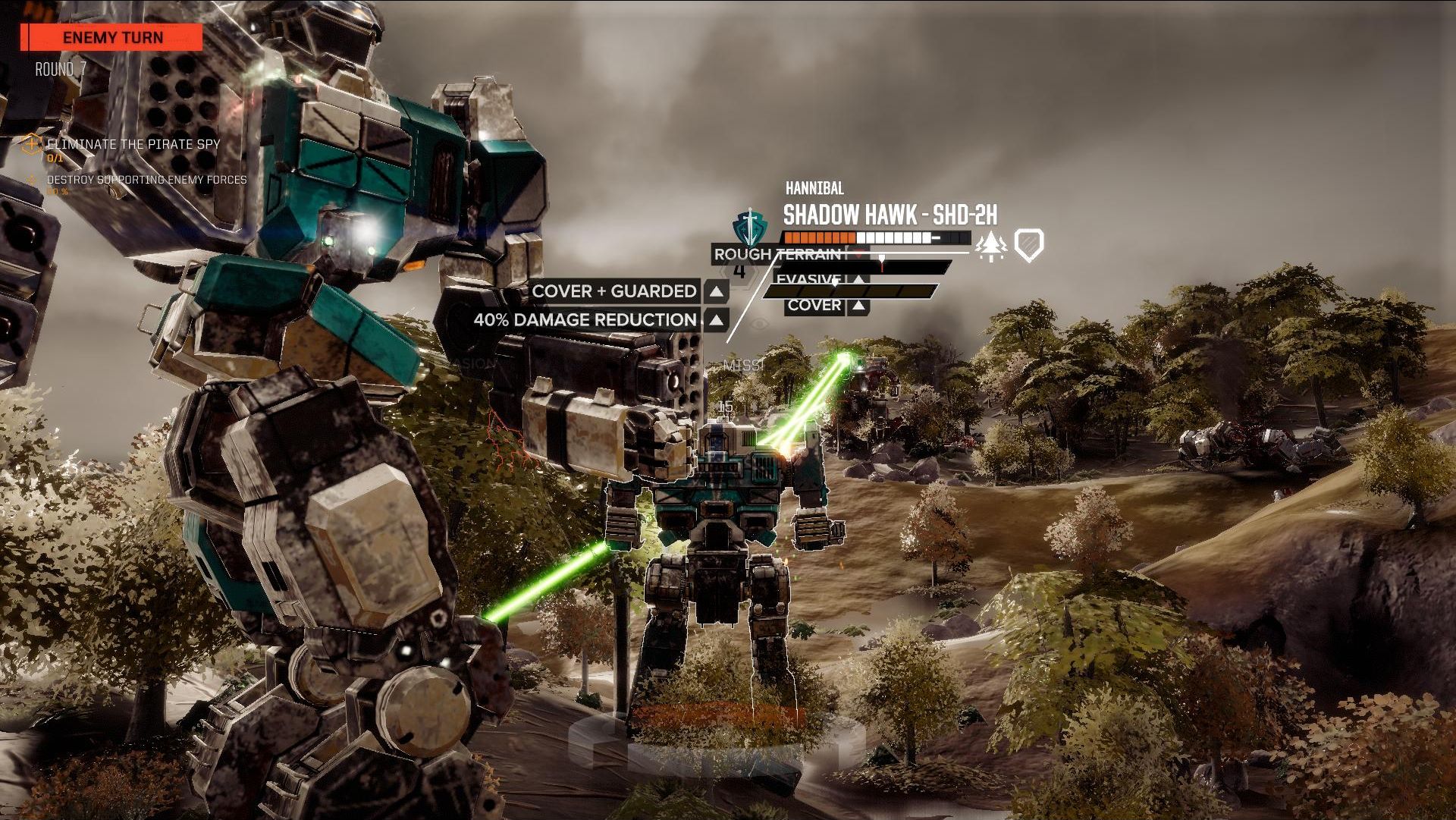 But for a game about giant robo people with guns for arms, guns for shoulders, and sometimes even guns for chests, BattleTech remains surprisingly stony-faced in its presentation. Its menus are spartan, its universe is dense with hegemonies, dynasties, and republics, and its conversations are peppered with so many references to imagined history that several require their own mouseover tooltips. That history hangs heavy: there’s more than a thousand years of it supporting BattleTech’s 31st century, developed over the 30 real-world years that have passed since the tabletop game of the (eventual) same name first arrived.

For MechWarrior die-hards the lore baked into campaign mode will thrill, but playing through the story now, I found that the dialogue stodgy. RPG-esque conversational choices exist, but more often than not I found myself brainlessly clicking through dialogue trees just to get to the next mission, my brain too full of confederacies and protectorates to track who I was fighting for in the coming robo rumbles, let alone care how I answered their request for aid.

Fortunately, the game’s career mode, added in November last year, strips out this storyline, hands you the keys to a squad of randomly assigned mechs, and fires you and your dropshop off into a random star system. From there, it’s a freelancer’s life: hopping between planets to keep coffers full, mechs maintained, and pilots happy. The addition gives BattleTech an immediate replay value that its vanilla version lacked at launch, when players had to run through the slow-starting story every time they wanted to test their metal mettle. 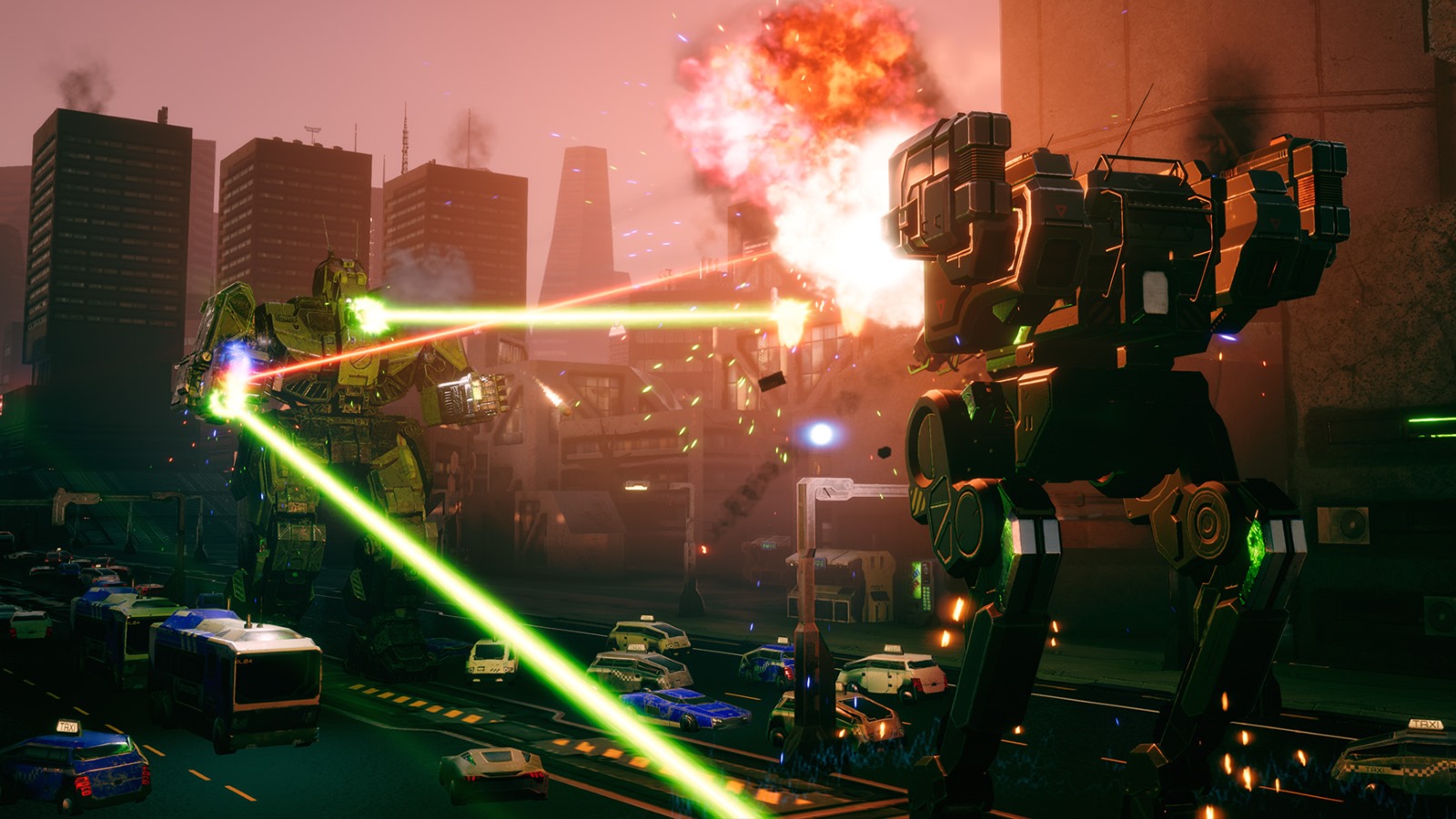 It wasn’t just the story at launch that was slow, but that the stodginess had extended into the game’s turn-based battles themselves, with the game's insistence on showing the arc and effect of each mech fusillade slowing fights to a crawl. Thankfully, menu options meant I could hasten process slightly: I lasted about three hours into a career mode before I turned off cinematic attack animations entirely, slightly sad to be missing close-up shots of laser cannon explosions and front-row seats at mega-ultra-super-heavyweight boxing matches, but pleased to be gaining full hours of my life back.

That doesn’t mean the game is quick, though. It’s slow to get your gaggle of mechs into combat, waddling them turn after turn over snowy hillsides and across dusty dunes until they make contact with an enemy force. It’s slow to select their attacks, a slightly unwieldy UI making target, weapon, and skill selection a teensy bit more cumbersome than it should be. It’s slow to tick off objectives, enemy reinforcements regularly arriving while your mechs are still mid-battle with another crew, putting you in eight-on-four fights. It’s slow to mop up an enemy force, the last few armoured stragglers stubbornly refusing to give up the fight with no mercy rules in place.

It’s even slower after the fight. Repairs can be crippling to even seasoned mech commanders when replacing and refitting your machines costs hefty amounts of money, time, and spare salvage. Wven a hard-fought victory sailed me close to bankruptcy, putting my best mechs on the bench for a month or more of in-game time, and forcing me to field a B-team that would invariably take even more punishing losses. 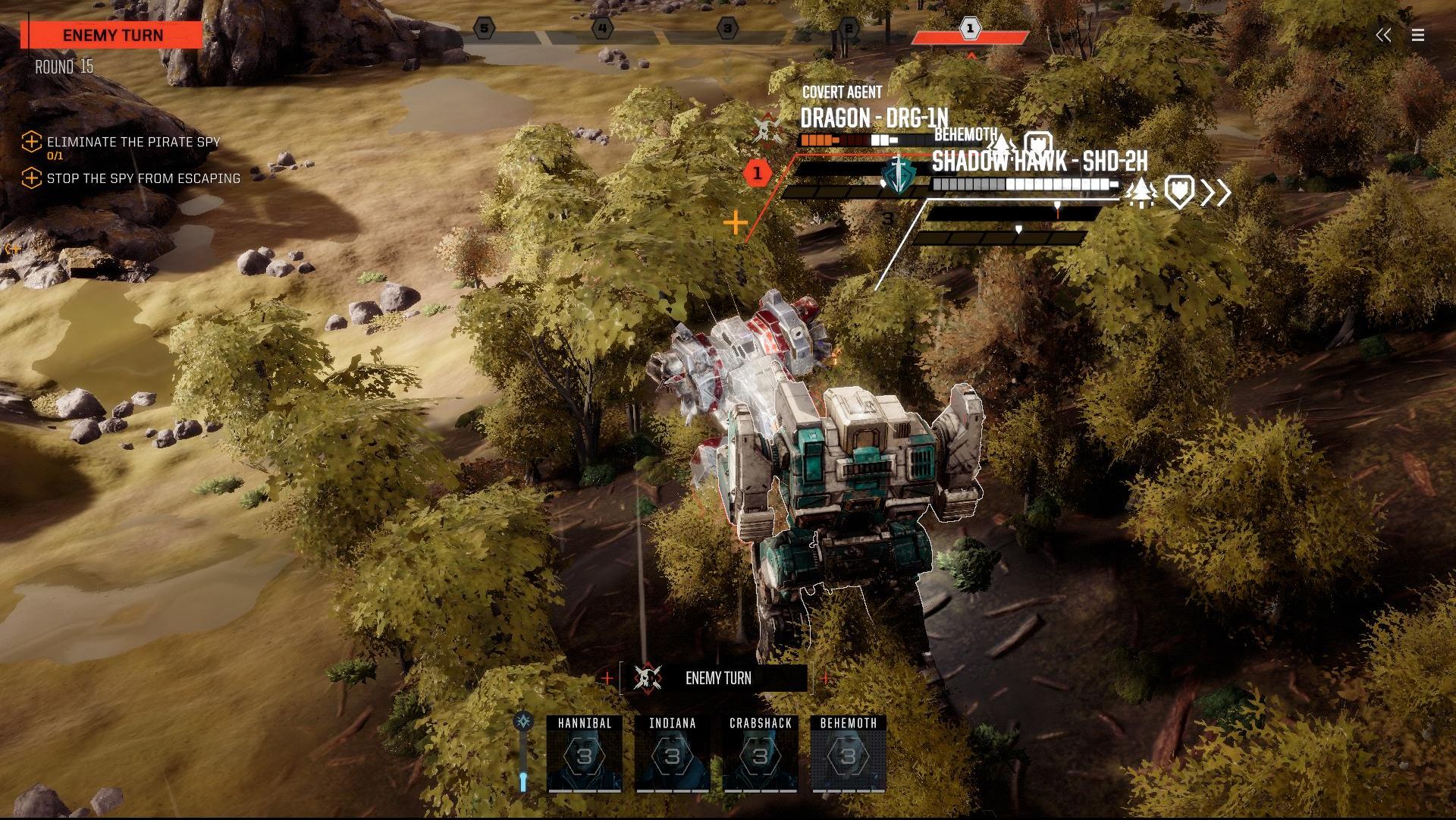 This means that a truly successful battle isn’t necessarily the most tactically enjoyable; it’s one where your mechs have taken no damage at all. Critical hits — the kind that blow an arm off, or knock a leg out of action — quickly go from being a story to tell to a frustration to fix, so expensive is the cost of repairing and refitting. To counter this, I started taking advantage of the ability to restart missions (added in the game’s 1.2 update), ducking out of any game where I took an unlucky shot early on, or where my mech placement made an objective too tricky to achieve.

It was an effective but unfulfilling way to win, a feeling compounded by the AI’s apparent weaknesses in targeting and planning. On one story mission I sprinted my medium-tonnage Shadow Hawk mech past a powerful garrison force of heavy mechs in a do-or-die bid to destroy a vital building. As my machine jetted up the cliff to the target, I was convinced I’d be followed by my enemies below, meaning I’d need to complete my mission with a single salvo or face a conga line of miffed mechs squaring up behind me. I lined up the shots, and missed. I cursed the mechanical gods (Optimus Prime, Robocop, and one of the Gundams), and waited for the killshot to come.

But it never did. The heavy mechs promptly ignored my comparatively flimsy Shadow Hawk, leaving me alone like Metal Gear Solid guards who just forgot they saw a box walk past their guard post. I was free to pepper them with long-range missiles until they keeled over, a process that took an inordinately long time in the real world, but ensured I didn’t have to put my Shadow Hawk back in the shop for another month-and-a-half of game time. A perma-death “Ironman” mode is on by default in career mode, but the fickle nature of enemy AI and my mechs’ propensity for getting unceremoniously blown up meant I turned it off for my second and third runs. 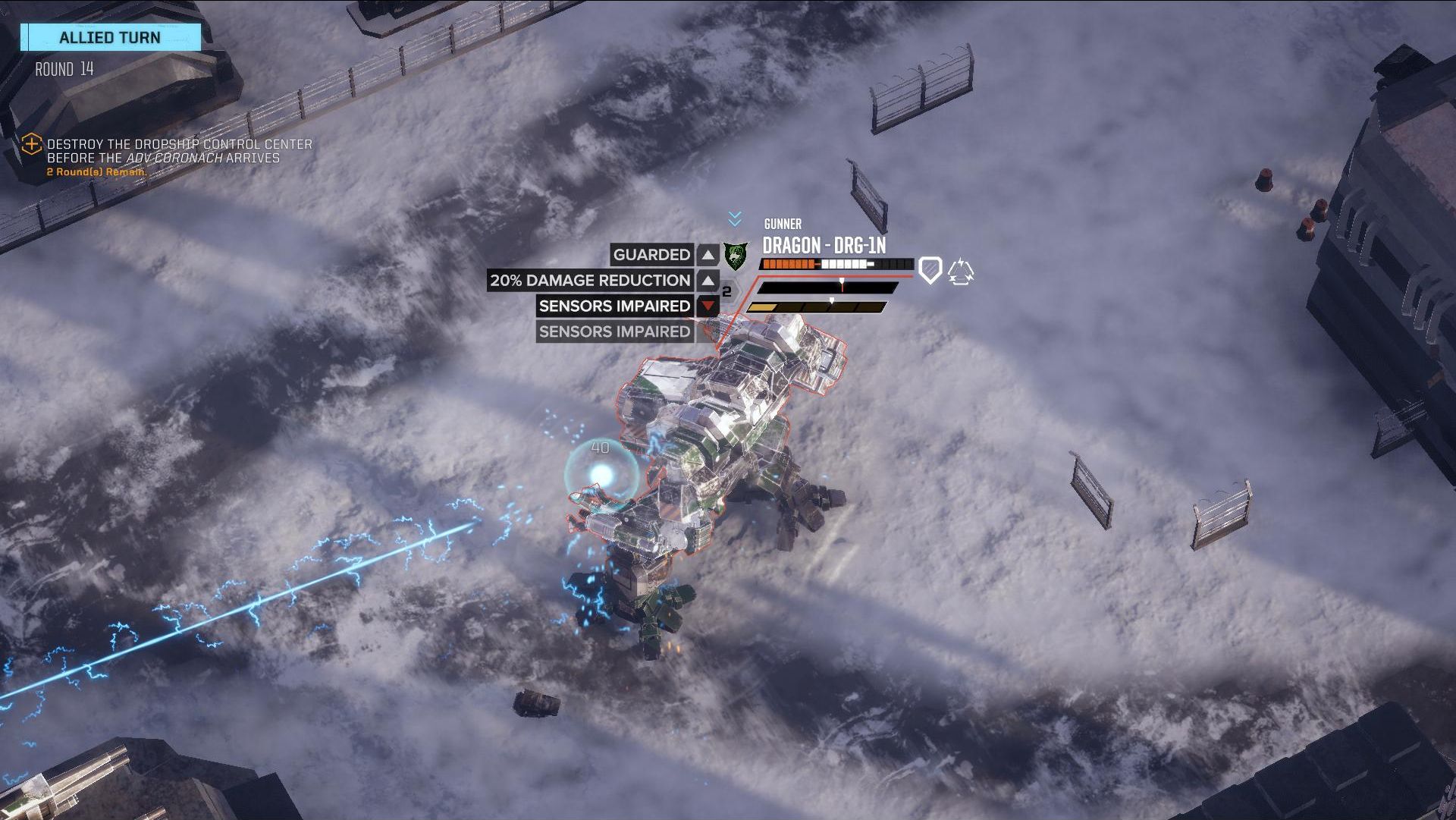 It was only in these later careers that I started to really get a feeling for my mechs. From the off, it’s hard to tell the difference between a Commando and a Spider, a Hunchback and a Trebuchet. But as I built my squad and switched their lineups, I came to know their silhouettes by sight, and rely on certain mechs for certain roles. My Dragon became a front-line brawler, sidling up to smaller mechs and delivering knockout punches. My Trebuchet looked mean, but was best situated at the back of a battle, raining down long-range missiles. And even when I could field a full lance of heavy and assault mechs, I still had a soft spot for my Firestarter: a lightweight speedster that could flank a much bigger machine and shut down its systems with cleansing fire.

Updates have imbued these mechs with more space for personality, too. The most recent 1.6 update, released alongside the Urban Warfare paid expansion, threw in a host of variants to existing models that in turn inspired me to deviate from stock loadouts in my current stable — gluing laser cannons and heatsinks onto chassis I’d previously used as assault cannon platforms, and vice versa. I had varying success with the resultant machines, but was uniformly pleased that the updates gave me the confidence to experiment and deviate from orthodox setups.

That Urban Warfare expansion added new mechs, as well as inner city settings for battles: welcome additions for players tired of fighting over the same desert dunes, moons, and forests. It came a few months after the similarly sized Flashpoint expansion, which brought new mechs and tropical areas, as well as fleshing out career mode with the chance to engage in eponymous “Flashpoints”, missions threaded together with miniature stories. These missions strike a sweet spot between the generic side-mission battles that career mode previously tasked players with, and the prescribed story in the campaign mode, and their size and number means that career mode runs can feel appreciably different.

It’s that career mode, and the pressure of making my way as a freelance robo-biffer in the far fringes of occupied space that keeps me coming back to BattleTech. Its updates have made it faster, smoother, and less buggy, but it’s still a slow game, and its foibles only make it slower when repair, refit, and restart time comes into the equation. If you can handle that glacial pace, though, or if you delve into the well-stocked world of mods, BattleTech’s customisability and tactical options make it a surprisingly thoughtful take on the silliness of mech combat.