If you click on a link and make a purchase we may receive a small commission. Read our editorial policy.
Developer: Infinity Ward, Raven Software, Beenox, High Moon Studios
Publisher: Activision

'Of courses' are for horse critics with nothing interesting to say, however, and I'm not going to write a review filled with them. I just want to make it clear from the outset that Modern Warfare contains no surprises, outside of a few scenes where excess crosses the line into self-parody.

The waterboarding mini-game springs to mind, where I had to press buttons while prompted to avoid drowning. Or the section where I played as a small child, and repeatedly plunged a screwdriver through the chest of a soldier who'd just walked into my home and shot my father. Or the time I interrogated a terrorist by aiming a gun at his wife and kid.

Modern Warfare frequently and successfully tries to make you uncomfortable by getting you to stick weapons near or into civilian's faces. It wants you to think about how war is, actually, quite bad, but still drenches everything in that familiar and all-pervading tone of "Ooh-rah! guns 'n' glory 'n' all this is justified because look, America's enemies are worse".

As one member of your hodgepodge, globally-sourced squad puts it, "we get dirty so the world stays clean". That's not just one character's view, either. When spoken by an unapologetic war hero type who's been given permission to go off-book by a US general, and given that those actions save the day, it's the view endorsed by the game. This is especially striking, given one level passes off a real and questionable strike by the US Military as a Russian atrocity. 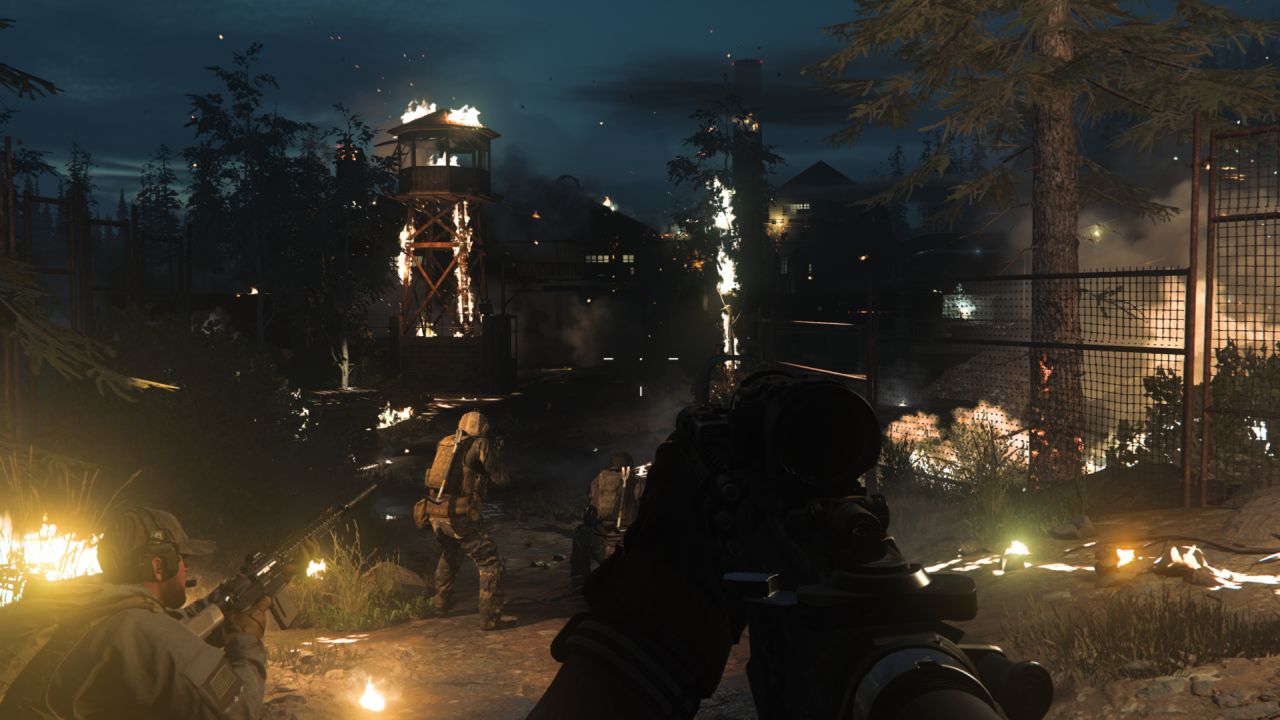 The game is tied to a war in the fictional Russian border state of Urzikstan. The Russians have invaded, under the command of a rogue general. You spend most of your time fighting them, while fussing over the fate of some chemical weapons your group has stolen from some terrorists. Lines are crossed, etc., but the story's predictable and lacks convincing characters. You've your young British sergeant who's frustrated with his government's perceived restraint. There's the leader of Urzikstan's resistance group, defending her country. Then that war hero I mentioned, plus another near identical one.

I don't find them convincing because they talk in generalities. They're constantly coughing up banal drivel about how they respect and trust each other despite their differences, rather than drilling into those differences. It's tame. Of course it's tame. But apart from the quality of the writing and its endorsement of American interventionism, I hate to say the campaign is pretty great. Frustratingly so.

It's varied and well-choreographed, punting you between the war-torn streets of Urzikstan and recognisable European locations. One section has you clearing a London townhouse, with claustrophobic stairwells and terrorists waiting in ambush throughout. Others take place largely in the open - and in the dark. Equipped with night vision googles, you're stalking enemies who barely stand a chance. I liked it best when the tables were flipped, though, and that darkness was used against me. I remember a retaliatory attack from the terrorists, advancing over fields under the intermittent, pallid light of special illuminating ordinance. Then we ran out of ordinance. 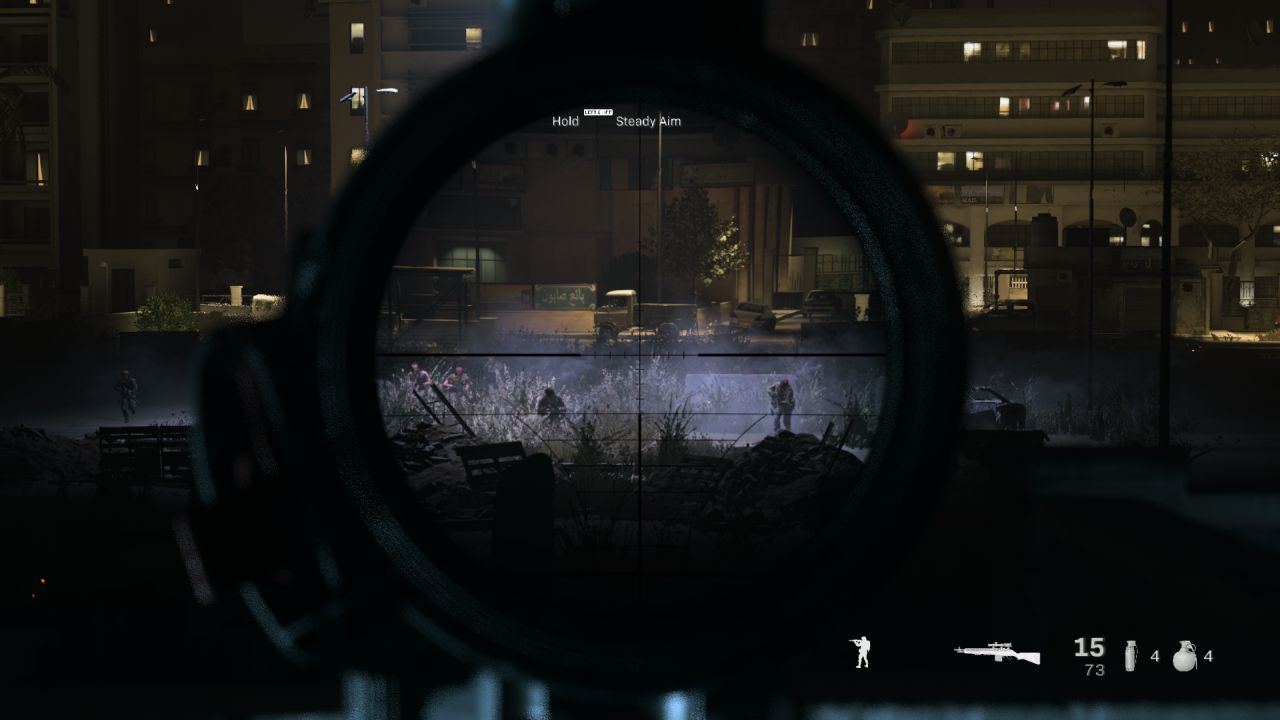 I played on the difficulty level above normal, where being fired at for more than a second is more than enough to send you back to the last checkpoint. I don't think it would have felt so tense if I hadn't been so vulnerable, and I wouldn't have been so willing to be vulnerable if those checkpoints weren't so generous.

There are a few missteps, most notably a clumsy section where you have to guide someone to safety via security cameras. Apart from those stumbles, though, the action charges forward at an admirable pace. You'll fly exploding RC planes into helicopters for a minute or two, then before you know it, the war has moved on and pressed another toy into your hands. There's nothing groundbreaking, a la Titanfall 2's set pieces, but it's comparable in that very little outstays its welcome. Turns out war changes quite a bit. Hur hur.

That's not quite as true for the multiplayer, which is, well, bog standard. I'm not saying it's no good. If you're the one person reading this who's never played multiplayer COD before, you may well delight in hair-trigger lethality and near-instant respawns. In most modes, death comes with little consequence. The focus is on the moment: on twitchy reactions over clever stratagems. If you're one of the many that know you like that sort of thing and annually dip in for another dose, this be that. 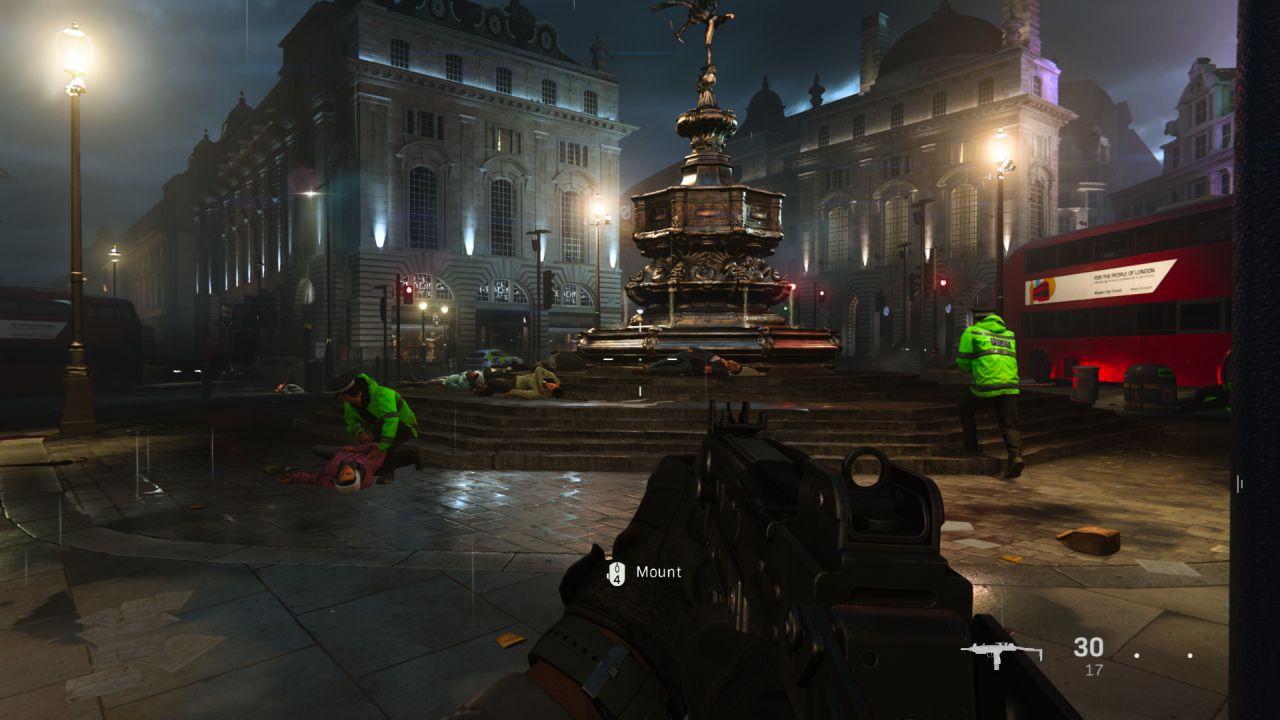 I've seen some people criticising the maps for their tendency to forgo tight chains of corridors in favour of more naturalistic and open killing grounds, but for me that's no black mark. It's broadly true, but in most modes I haven't noticed that impacting COD's central spiral of bumslides and bullets. It's still frantic, and nearly every fight is still won by whoever spots their opponent first. Perhaps I just haven't been matched against many people who've learnt to exploit the additional hidey holes.

There is the new Ground War mode, which beefs up the player count and has you warring over sprawling maps dotted with capture points. It's Battlefield by way of COD, and suffers for that comparison. Most of my dissatisfaction revolves around COD's lower time to kill, creating a pace that's ill-suited to larger conflict. There's little room for situations to develop when most fights end instantly, and it's harder to get away with being sneaky when you can be murdered in a moment. 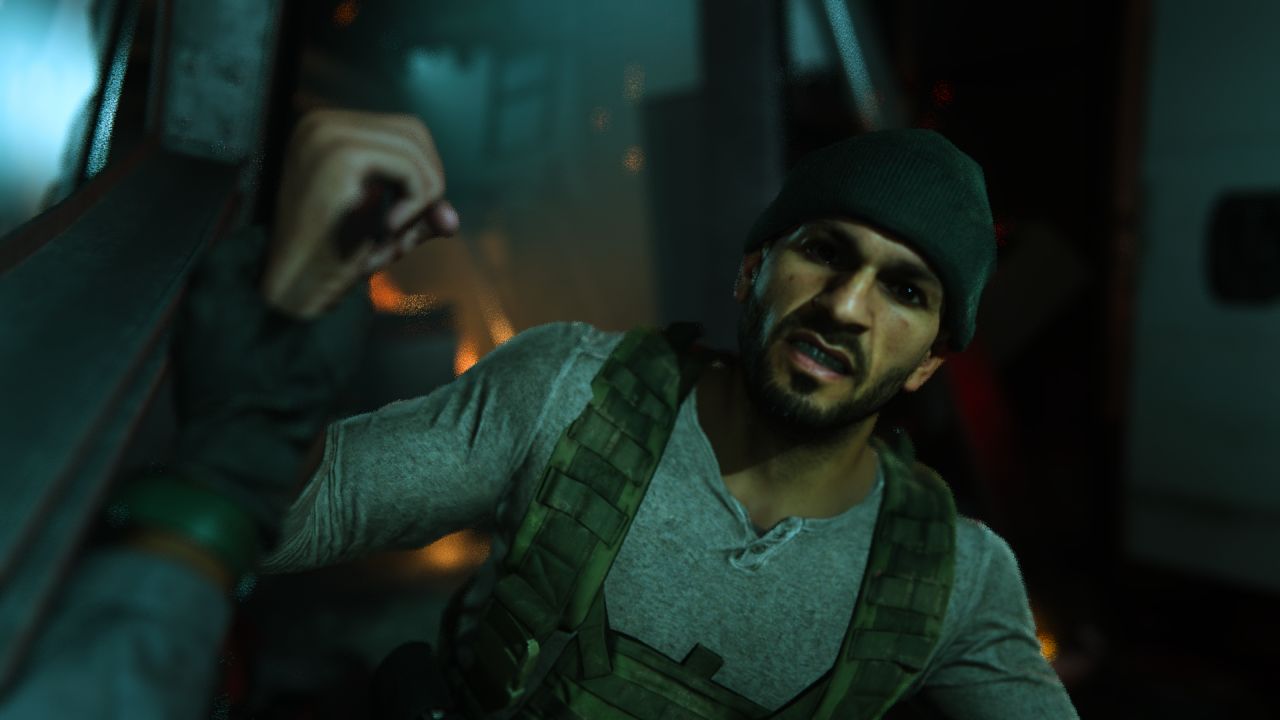 I much prefer the throwaway intensity of Free For All, or the shifting dynamics of Headquarters mode, where both teams capture and defend shifting spots on the map. That's been a COD staple for yonks, but works better with maps that generally provide more angles of attack.

That just leaves the four-player co-op missions, which take the campaign's story towards joint operations between your squad and a bunch of less Machiavellian Russians. That shift jars, because it throws out the choreography of the campaign in favour of wide open spaces and waves of respawning enemies. It's not bad, but it's hollow. I charged between objectives plucked from the big bag of familiar co-operative tasks, hacking points and escorting tanks while radio chatter I often couldn't hear explained why. They co-op missions are there, they're fine, but don't buy the game for their sake.

Of course, you probably weren't going to. So let's get back to the two main points. 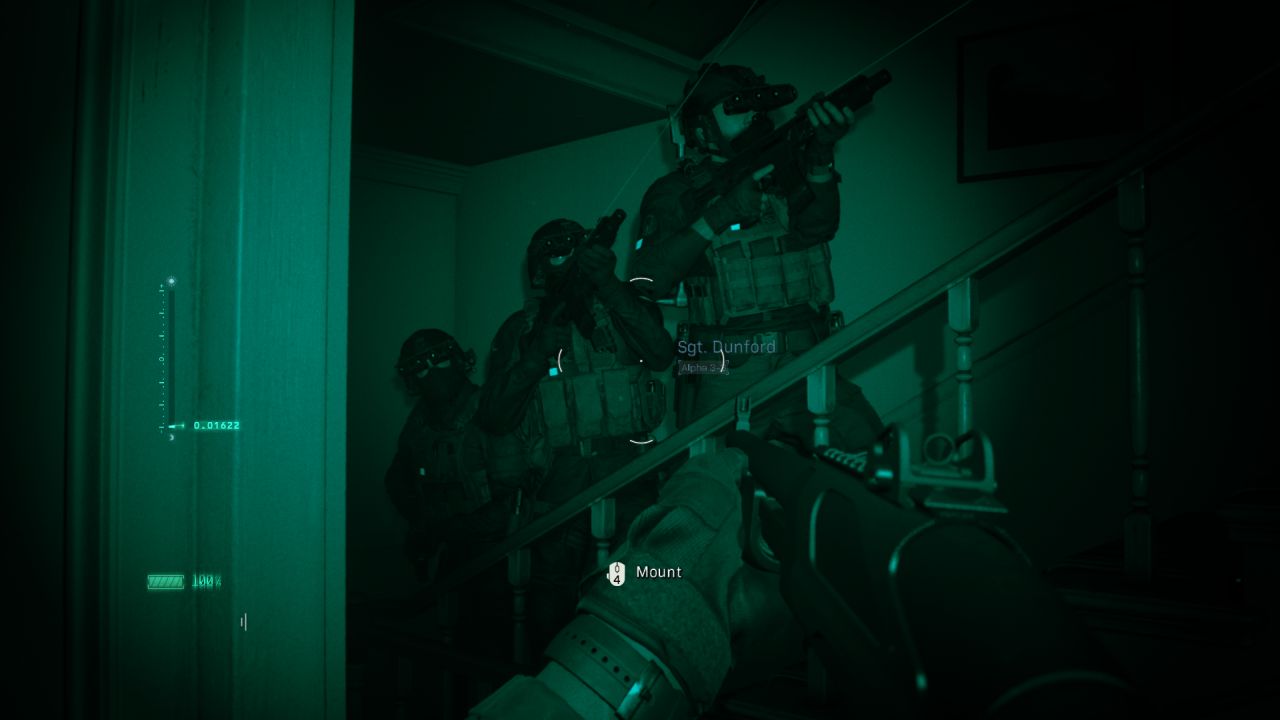 If you reckon a tense, varied, visually impressive and mechanically gripping campaign is enough to sweeten the sour taste of its politics, that's fine. That's about the page I'm on. If you're ready for another dunk in COD's multiplayer gunge, the tank's right there. The gunge is good as ever, and there's no need to play in Ground War's side-pit if you don't want to. Personally, though? I'm gunged out. Modern Warfare delivers pretty n' twitchy low-stakes shootouts, but my tastes have changed while COD has not.

COD's tank of new weapons and maps will never run dry, but it has stagnated. Of course it has.