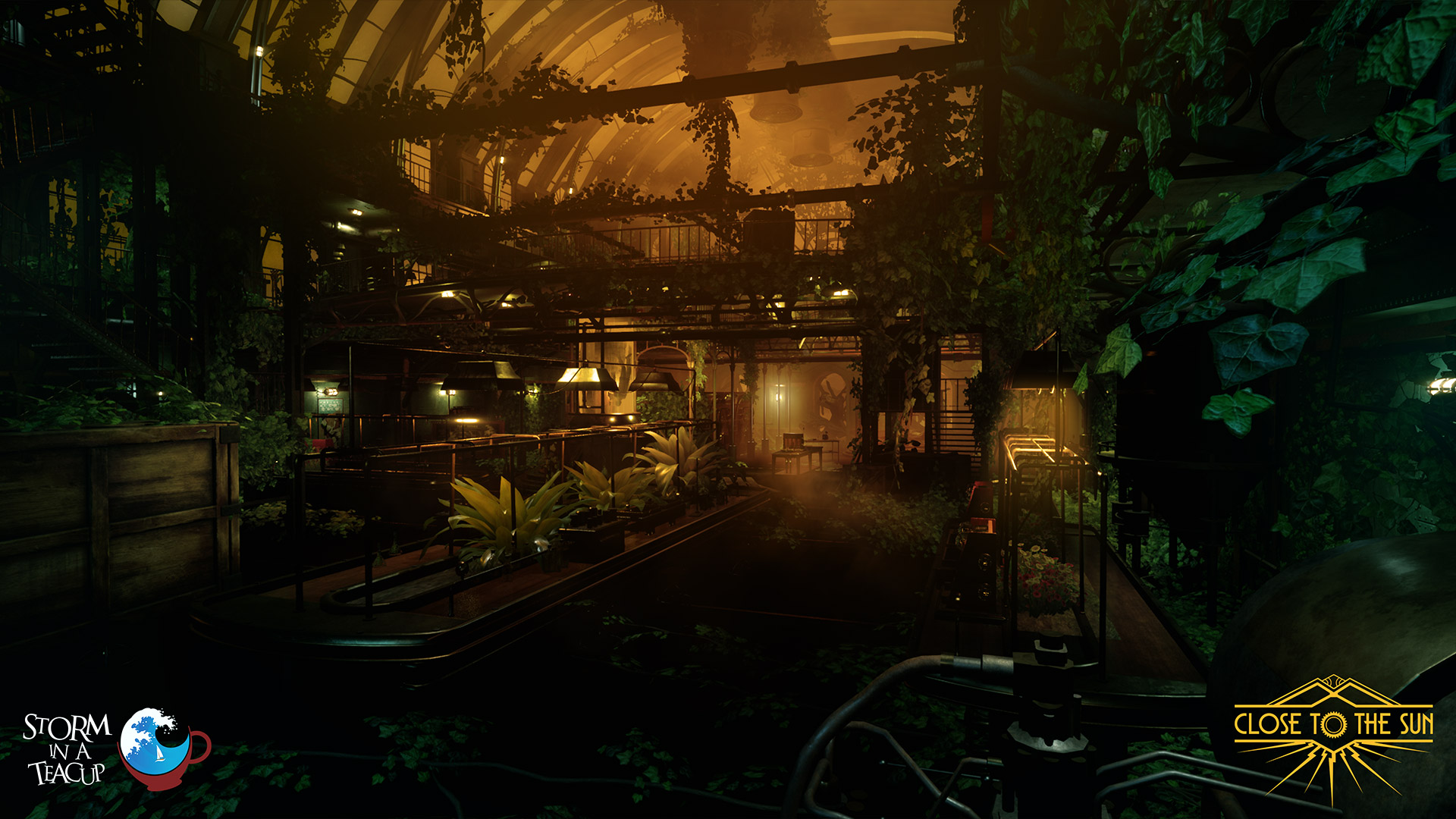 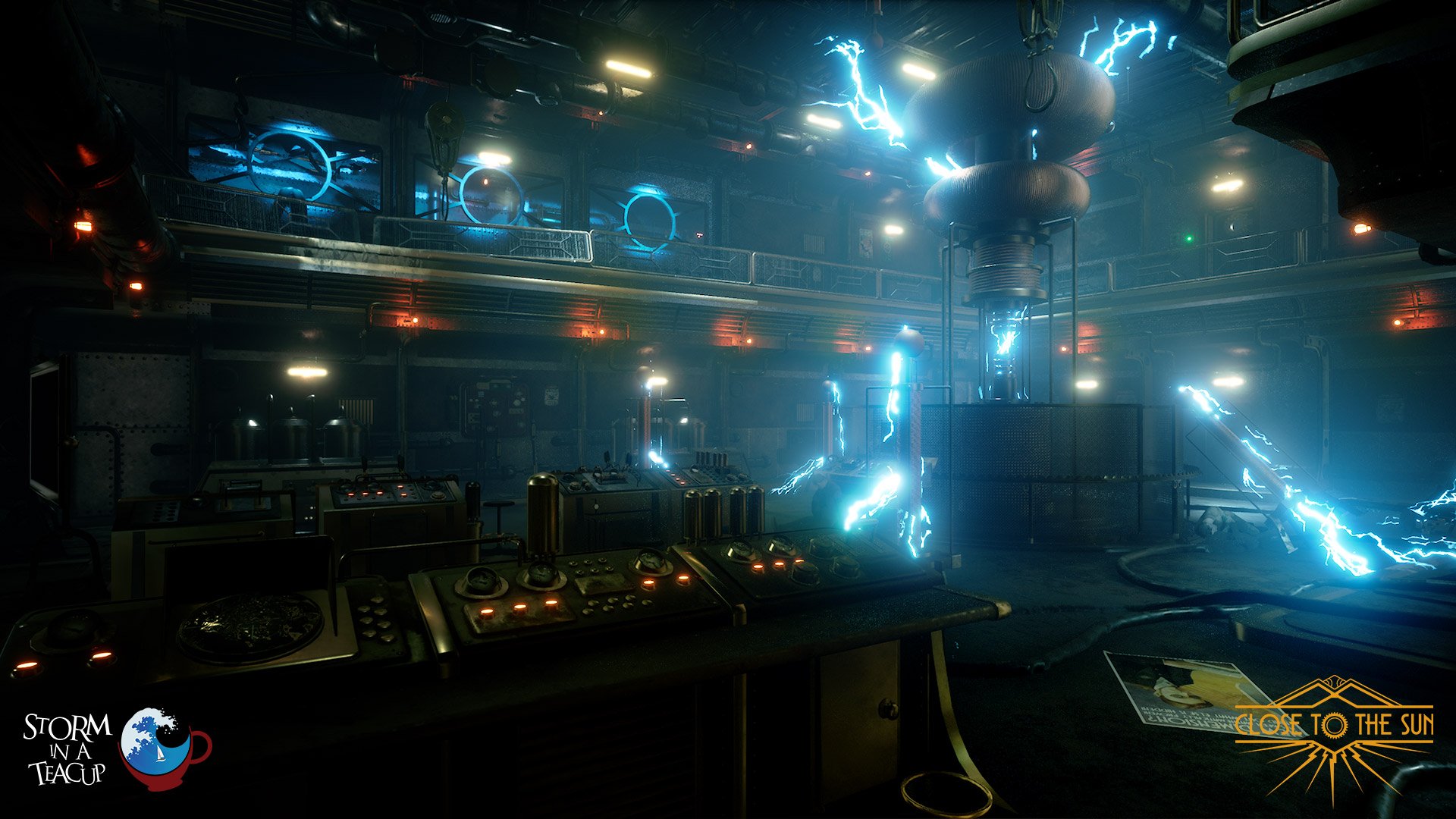 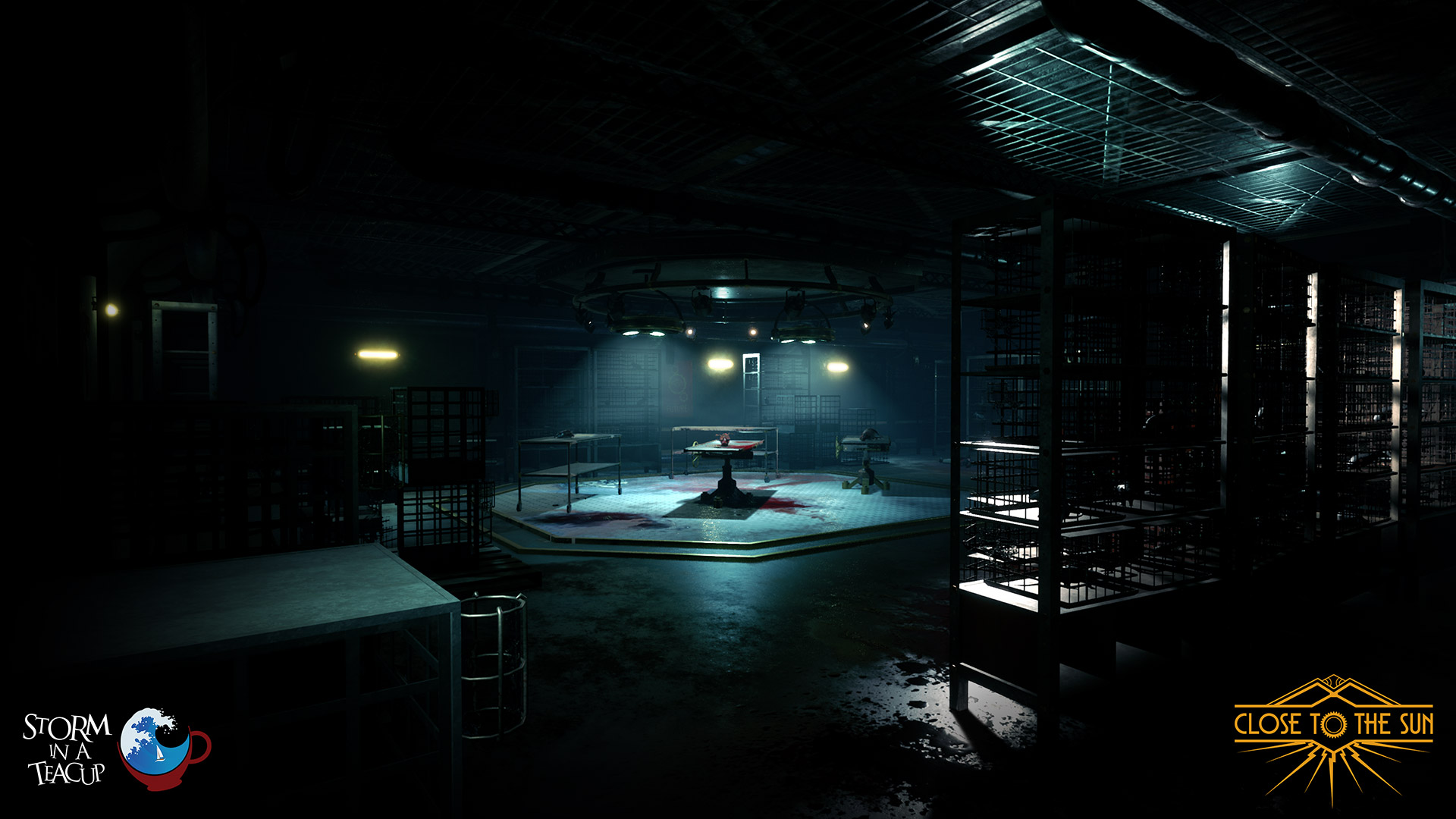 These days, a lot of people love Nikola Tesla. Tesla deserved Edison’s success and recognition, they say, and should not have died penniless and obsessed with pigeons. His achievements remained pretty obscure for many years after his death, so the resurgence in Tesla-mania over the past couple of decades is fortunate for Close To The Sun, a fact acknowledged by Joel Hakalax, game designer at Storm In A Teacup. Close To The Sun, which I’ve gotten a new hands on with, is set in a world where, basically, Tesla won.

Tesla was the sort of person who should probably have had an HBO drama about him by now, and as the dev team was putting together the initial pillars for the game, having one be ‘Tesla is in it’ proved rich pickings. “It didn't matter what kind of string you pulled -- towards his scientific endeavours, towards his personality -- no matter what you pulled at something interesting would kind of fall out,” Hakalax said. 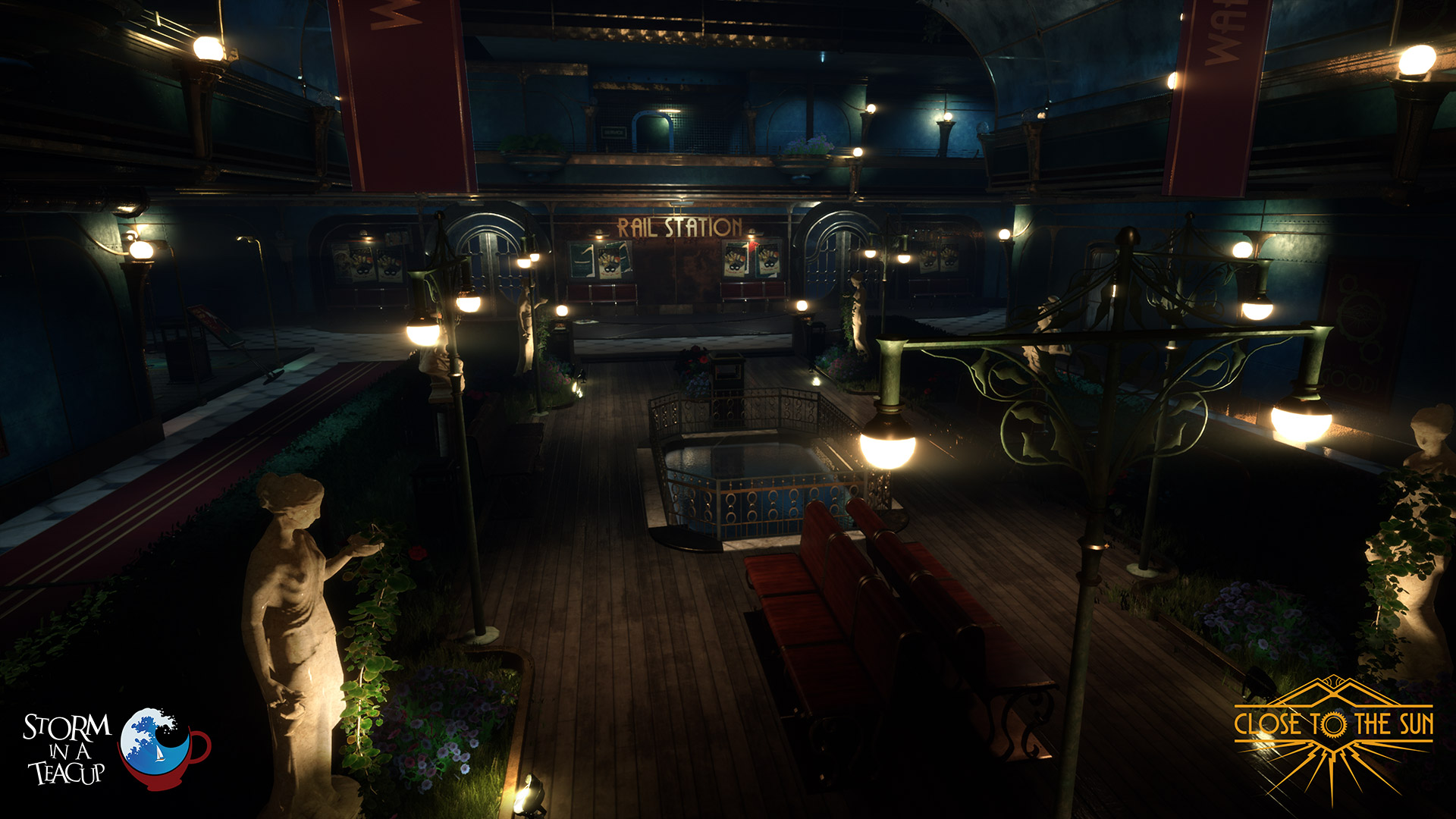 In real life, Tesla was unable to pay the mortgage on his famous Wardenclyffe lab, and it was demolished before it was finished. In the game, Wardenclyffe was successful, and expanded into a company providing electricity for half of the world. At the point the game starts, Tesla is the richest man on the planet, and has constructed a giant, autonomous nation of scientists and thinkers all living on a boat in international waters -- the Helios. You play Rose, a journalist whose sister has been living and carrying out research on the Helios for some time. And surprise surprise, when you turn up after she sends a letter inviting you, all is not well.

While Hakalax noted that he had to “be careful” when talking about it, a key part of the story in Close To The Sun is that your sister has been fiddling with time, and exploring it as a potentially infinite source of energy. A very creepy NPC chases you and yells that this whole situation is your fault, which it sort of could be. Maybe you’ve just not done whatever it is you did yet. So it sort of makes the plot impossible to guess at.

The main influences for Close To The Sun are games like Soma, Layers Of Fear and Outlast. It’s a horror game but, Hakalax said, doesn’t lean into the horror quite as much. Rather, they’re using the tools of horror and suspense to keep the player on their toes. That’s not to say that I didn’t get a few scares in the hands on, but it also made me laugh. I followed a trail of blood around a corner, only to find that it was a can of paint. It also has a slicker, smoother experience to it, that I believe film fans would call “cinematic”. This is in part achieved by a system Storm In A Teacup have put under the hood. You won’t know it’s there but, in theory, events will trigger based on what you’re looking at. The idea is, Hakalax said, that the game will communicate more to you personally as a player, and what you’re interested in, rather than making it feel like the game is being played for you. 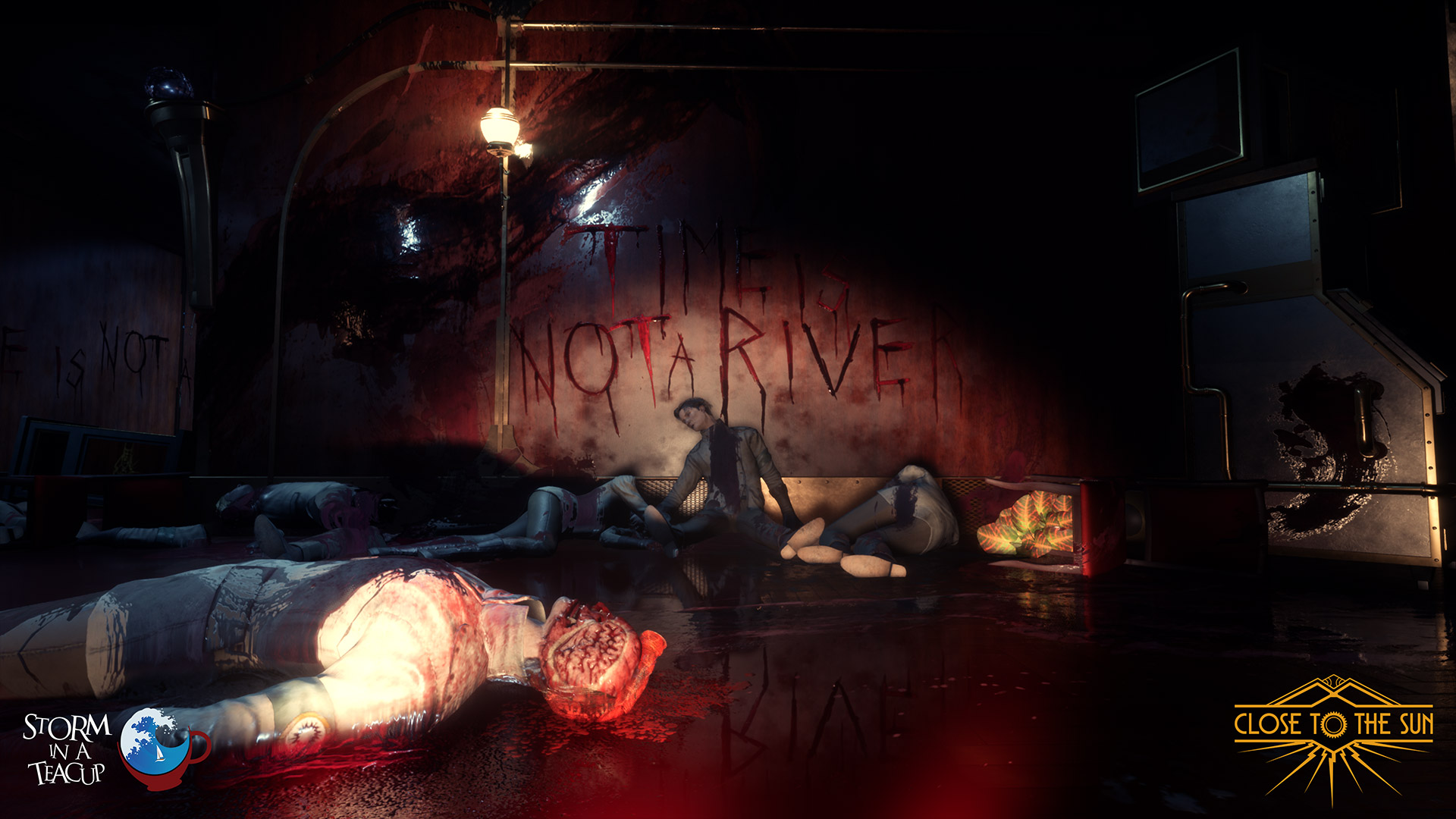 The biggest comparison that Close To The Sun has been drawing so far, however, is to a game that it seems to not want to make eye contact with, to the point that before playing the preview build I was told that BioShock is one of the things the game is not.. I made the comparison myself last year after first playing Close To The Sun at Gamescom. Because you can create a checklist of things in Close To The Sun that goes:

“We hear it a lot, and part of us just takes a shot and part of us high fives, and part of us worries about player expectations making that kind of connection,” Hakalax said, when I asked if he thought the comparison would be a problem, and if they were trying to distance their game from it. “We see it as something positive, of course, but we want to be sure that players don't start up Close To The Sun expecting a BioShock type of game.” They take the comparison as a compliment, but it’s also a different type of game, even if you might squint and get déjà vu at the look of it. 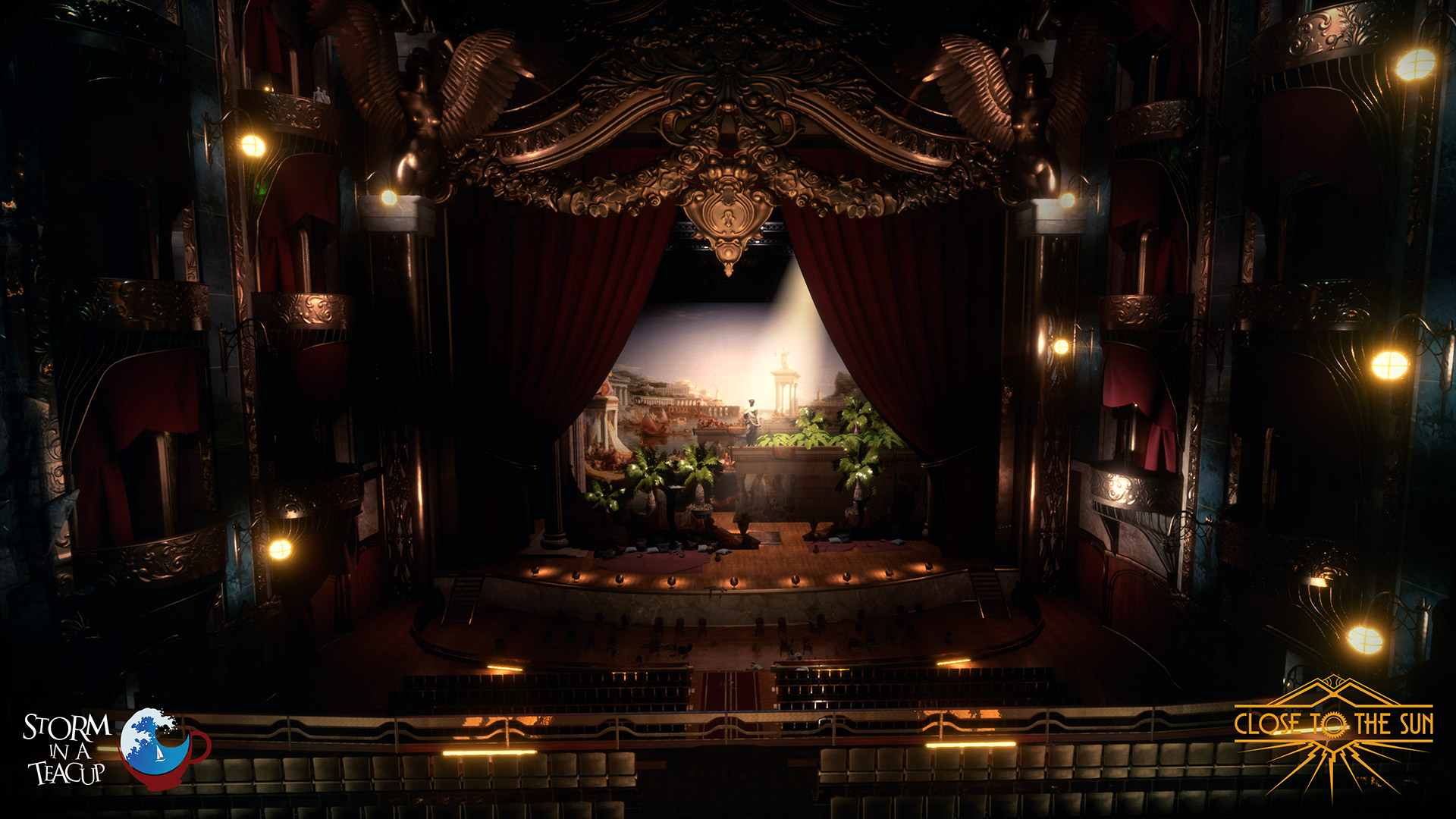 There’s no combat, but I didn’t miss it. Creeping around the recently ruined grandeur of The Helios is nervy enough in itself. It’s a familiar feeling if you’ve ever been home alone and given yourself the shivers, or ended up in a museum near closing time and suddenly been terrified that you’re about to be locked in. And Tesla is a near constant presence. One of the first things you come across on his ship is a museum to himself, complete with informative voice recordings by, um, himself, and a giant golden statue of, er… okay, mate, you’ve gone a bit supervillain, here. By the time he starts talking to you on the radio, whilst you discover notes on potential Edison spies in bloody interrogation rooms, you’re not really primed to jump on the Tesla hype train.

“Of course we have some degree of responsibility to him as a person and to his legacy,” said Hakalax. “We've amplified certain aspects, we have references to his personal life that happened in his real timeline, so to speak, but we've been conscious about that since day one.” The balance is to not overstep in the depiction, whilst making their own version of Tesla as interesting as they can. But nothing on the Helios is exactly as it seems, including the man who built it. “The more you get to know our Tesla... hopefully you'll come around at the end.”