I did mention yesterday that Sherman Crabs were horribly vulnerable while mine flailing, didn't I? I'm fairly sure I probably pointed out that, in order to protect their relatively vulnerable main guns from flying debris, they reversed their turrets before venturing into devil's gardens.

(Colonel Croesus is an open-to-all game of Combat Mission: Fortress Italy in which Allied forces are orchestrated by commenters while German units are computer controlled. Each daily turn covers one minute of action. For a scenario outline, click here)

Between Colonel Croesus' scratch force of Allied reprobates, rugged individualists, and rum customers and several lorry loads of half-inched gold bullion is an unknown number of Axis reprobates, rugged individualists, and rum customers determined not to share/surrender said bullion. Rather inconveniently, there's also a small but deadly field of Tellermine 35s. Before Crabmeat 2, one of the Comment Commanders' two Sherman flail tanks, trundles off to deal with this hazard, it pumps a couple of smoke shells into the black maw of the submarine base main entrance. 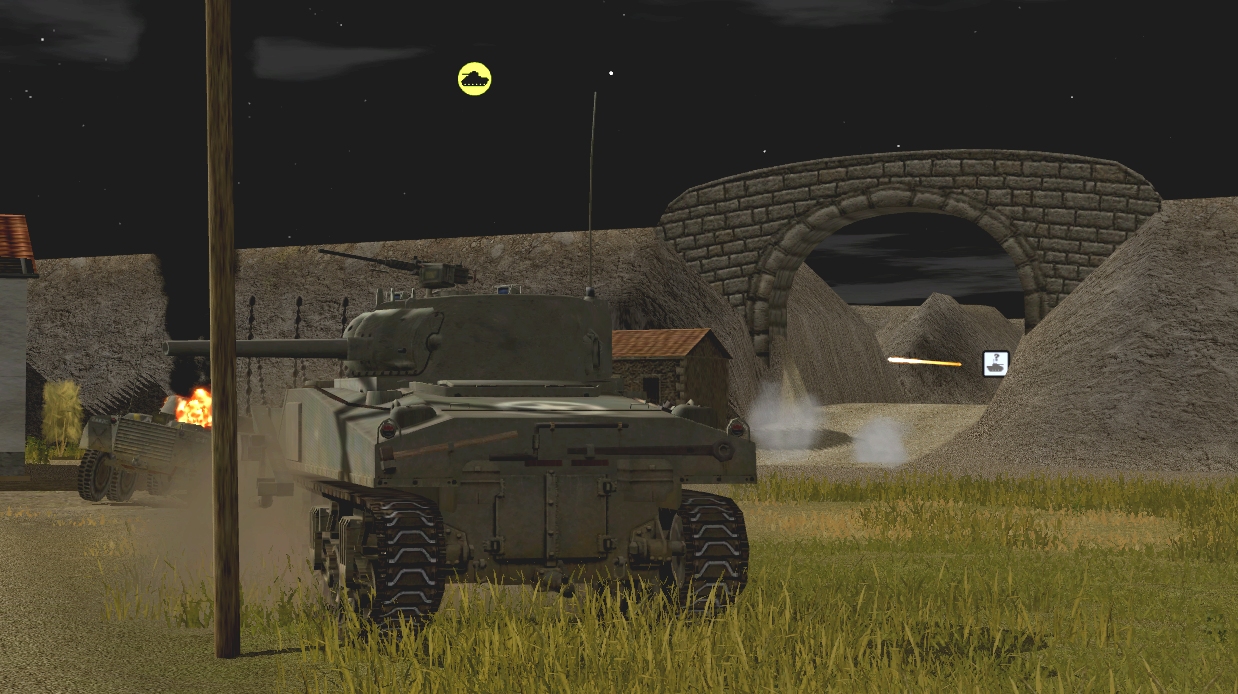 While the thinking behind this safety measue is sound, the execution – for which I, the GM, must take some of the blame - isn't perfect. When Crabmeat 2 begins her sod scourging, the smoke screen is still a tad immature (smoke screens develop over time in CMFI), and Crabmeat 1 has yet to reach her covering position. For a few seconds before smoke and dust clouds intervene, our distracted mine molester is visible to something lurking in the Stygian gloom of the entrance tunnel. That something unleashes a cannon (?) volley that connects unerringly with the rotating turret of Nemchik's tank. Fortunately, silver scratches and leaping sparks are the only consequence of the conjunction. 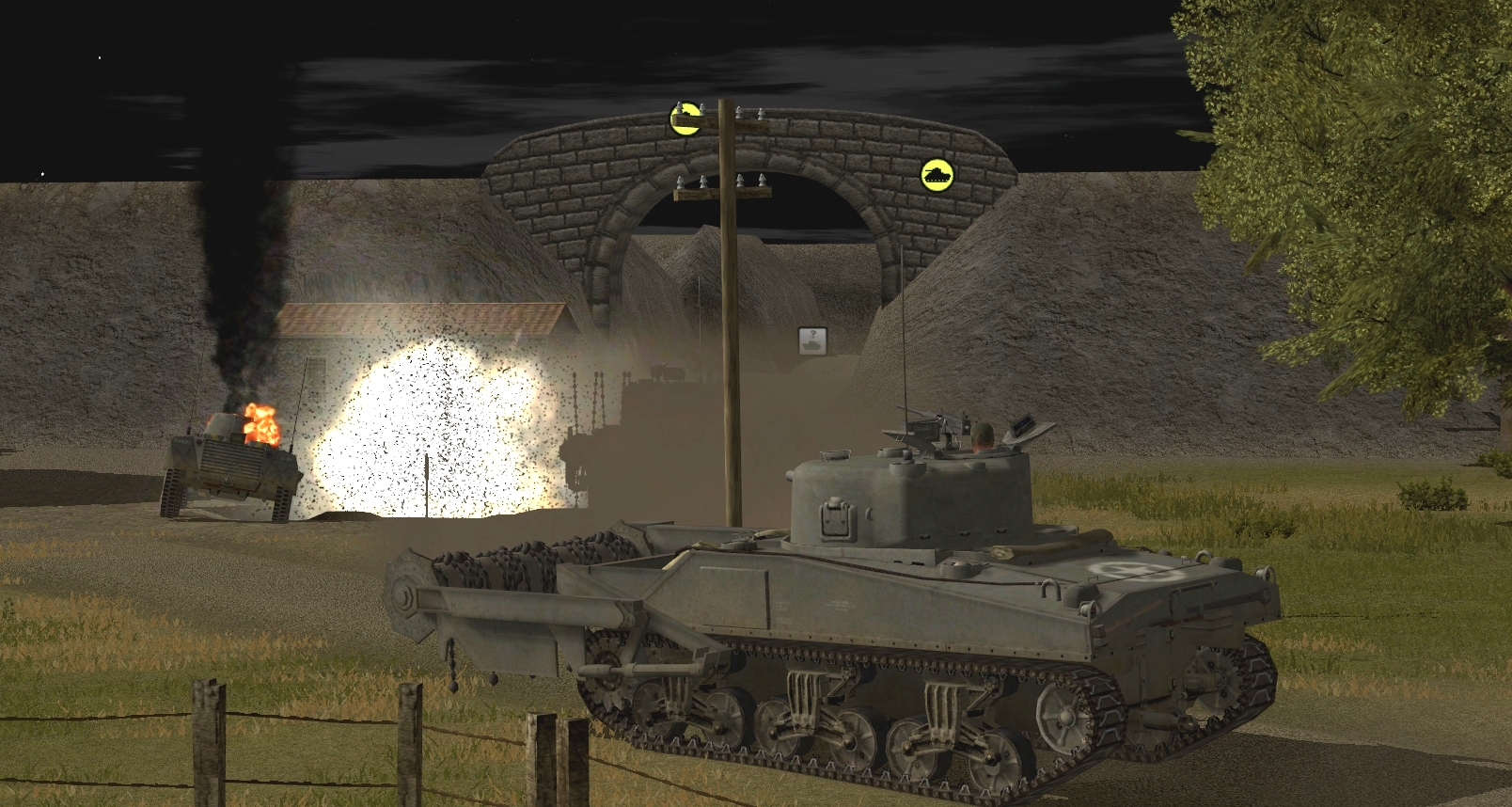 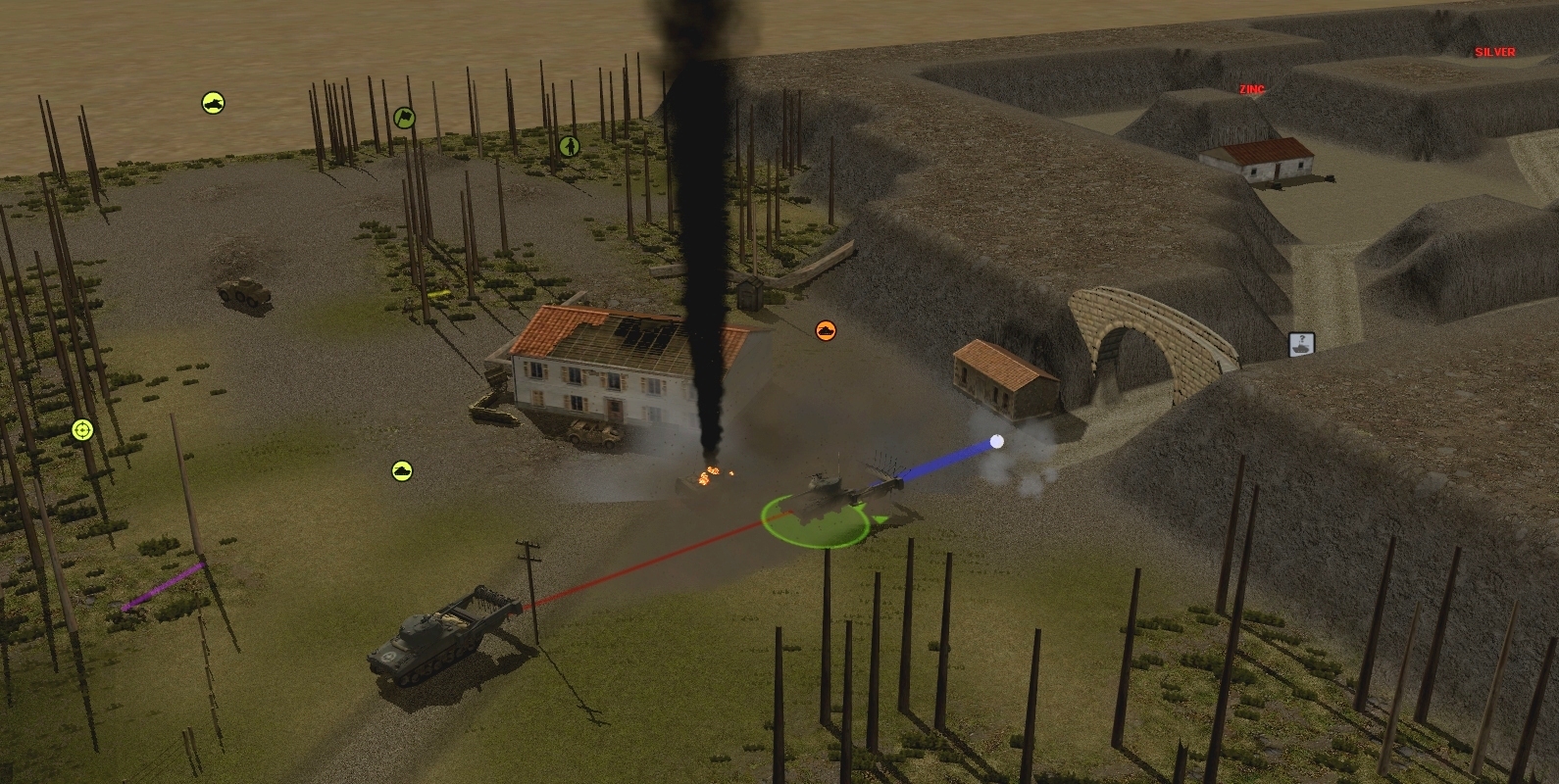 Not keen on flying shrapnel, 2nd Squad decide to inspect the dilapidated villa from the rear. What they discover tucked behind the building, prompts a flurry of excited whispers. It looks like one of Steiner's two Tigers didn't make it as far as the submarine base. Judging by the gaping engine hatch, and the tools and oily rags scattered about, the Panzerkampfwagen VI's Maybach V12 disgraced itself a stone's throw the entrance. Steiner must have been furious. 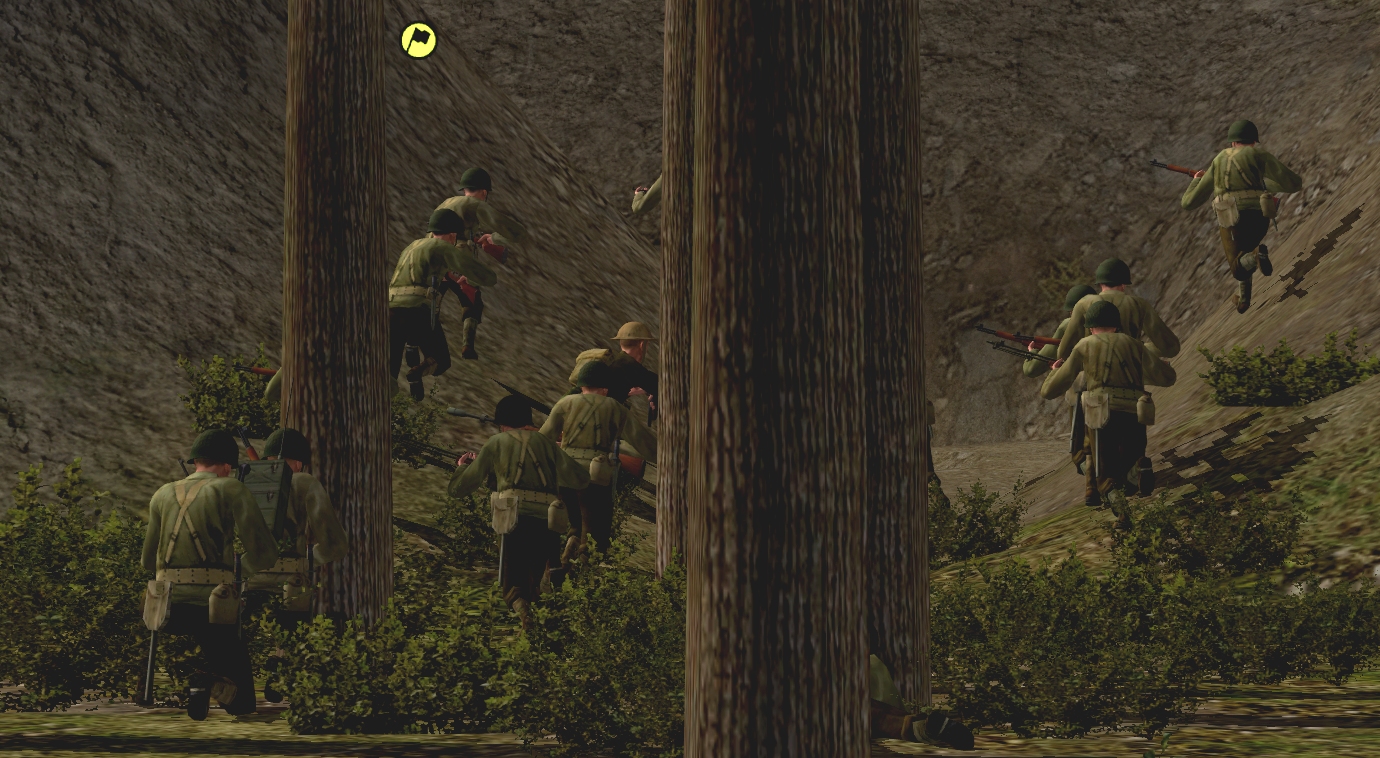 When the clock freezes for the first time, Squires is seconds away from mouseholing the rough stone wall at gg/hh6. Circa nn3, 1st Squad, the PIAT Team, and 'Big Joe' Rocca, are swapping warm woodland for cool cavern.

Wood, the sniper, is at vv12 watching, and feeling, through the rubber soles of his commando boots, the fireworks at the main entrance. Meanwhile, peeping from the turret of his Autoblinda at uu18, Count Casari is softly humming a tune I believe is from Verdi's Attila. 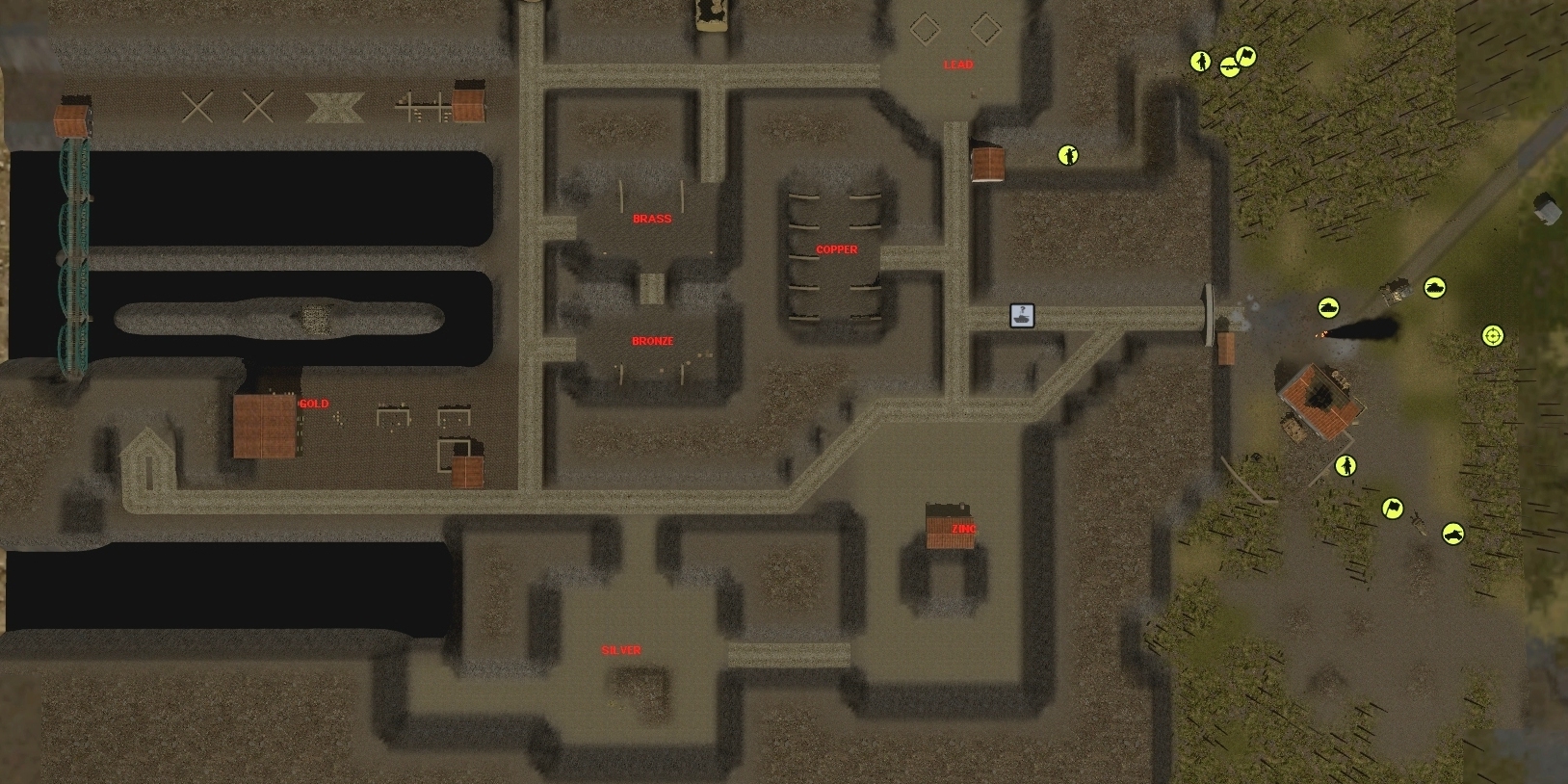