My favourite Donald Sutherland performance has to be either 'Kate Bush's dad in the Cloudbusting video' or 'Éamonn Connor in Colonel Croesus, the 1970s war flick that inspired this communal Combat Mission scenario'. I know some critics felt he played the Irish nationalist turned Waffen-SS tank commander turned renegade treasure hunter too camp, but for me he was the highlight of the movie. I still can't look at an antimacassar without thinking of Connor/Sutherland.

It was Connor's Tiger tank that 2nd Squad discovered dumped behind the villa. After reluctantly abandoning their kaput Panzer VI, Éamonn and his men flagged down a passing Panzer III, evicting its flabbergasted crew at Schmeisser-point. Ensconced in this new, far from ideal battle wagon, Steiner's right-hand man was down at the quayside at GOLD when the news reached him that “Croesus has crabs!”. After uttering a typically witty/risqué response, he asked his driver, Hans, to head eastward.

Wood, the sniper, spots the Schürzened interloper first. While, close by but out-of-LoS, Crabmeat 2 manoeuvres awkwardly into a barely-Sherman-sized niche, and Croesus' HQ team participates in the elimination of Count Casari's killers...

...the sharpshooter takes aim at the becapped bonce peeping from the command cupola and, with bated breath, takes the shot.

It turns out to be a very costly miss. His eye drawn to ii13 and jj14, the mouth of the short diagonal tunnel, by his eagle-eyed commander, Connor's gunner, Pat, makes the necessary adjustments and unleashes hell. 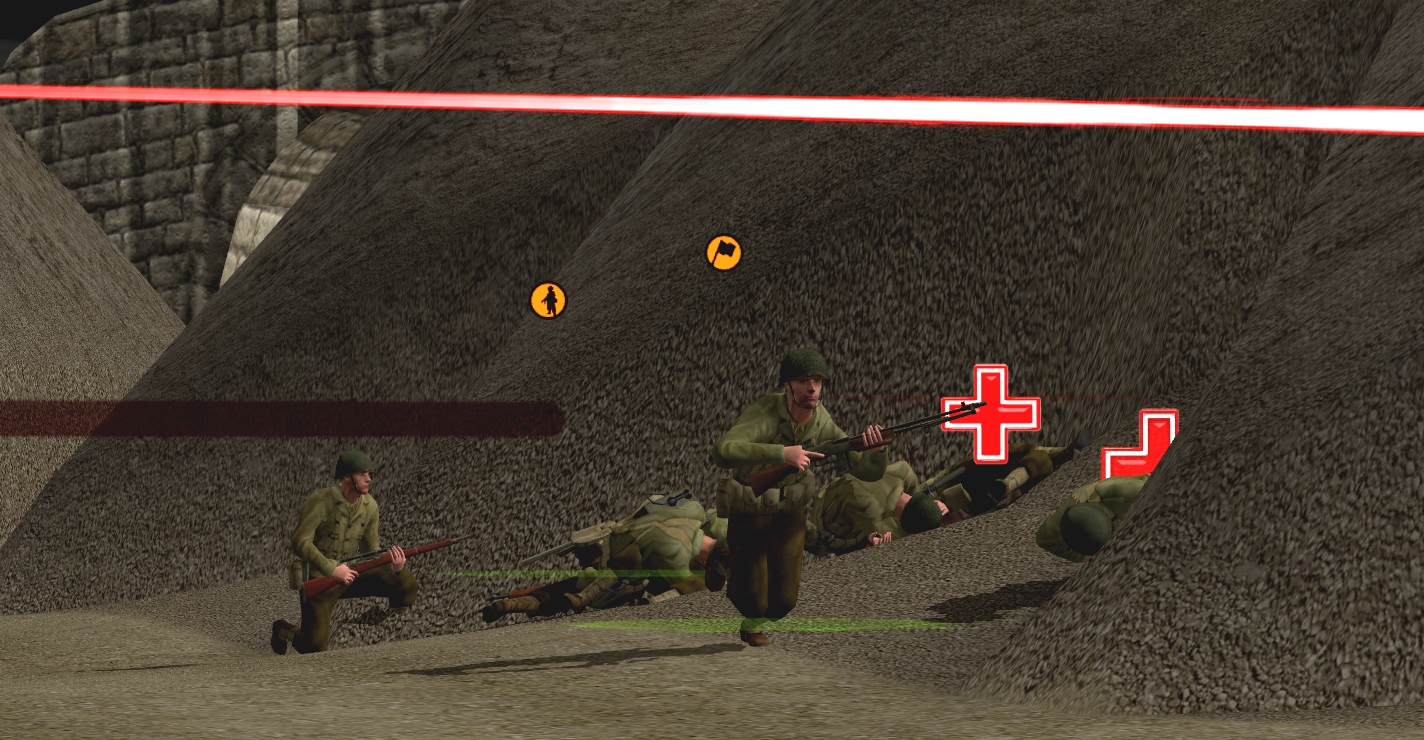 Colonel Croesus is one of the first to go down. 2nd Squad's B Team bear the brunt of the second burst. Within seconds there are six bodies writhing in the dirt. Wood is readying a second or, possibly, third shot when the clamour around him suddenly fades and, very briefly, he finds himself hovering above the kitchen at Lilac Cottage. Meg is dozing in the chair by the stove, Doodlebug the cat curled up on her lap. Meg whimpers and twitches in her sleep, waking Doodlebug who jumps to the ground and stretches.

The T+60 hiatus can't come soon enough for the infantry pinned against the eastern wall of the diagonal passage. When the clock stops, both Croesus' HQ and 2nd Squad's B team are down to two men.

Sheltering behind Belinda's forlorn hulk, 2nd Squad's A and C team also sustained casualties this turn. Both lost a man while exchanging lead with an LMG team that entered ZINC from the SW corner shortly after the restart. A rifle grenade projected late in proceedings reduced the volume of incoming fire but hasn't removed the threat. 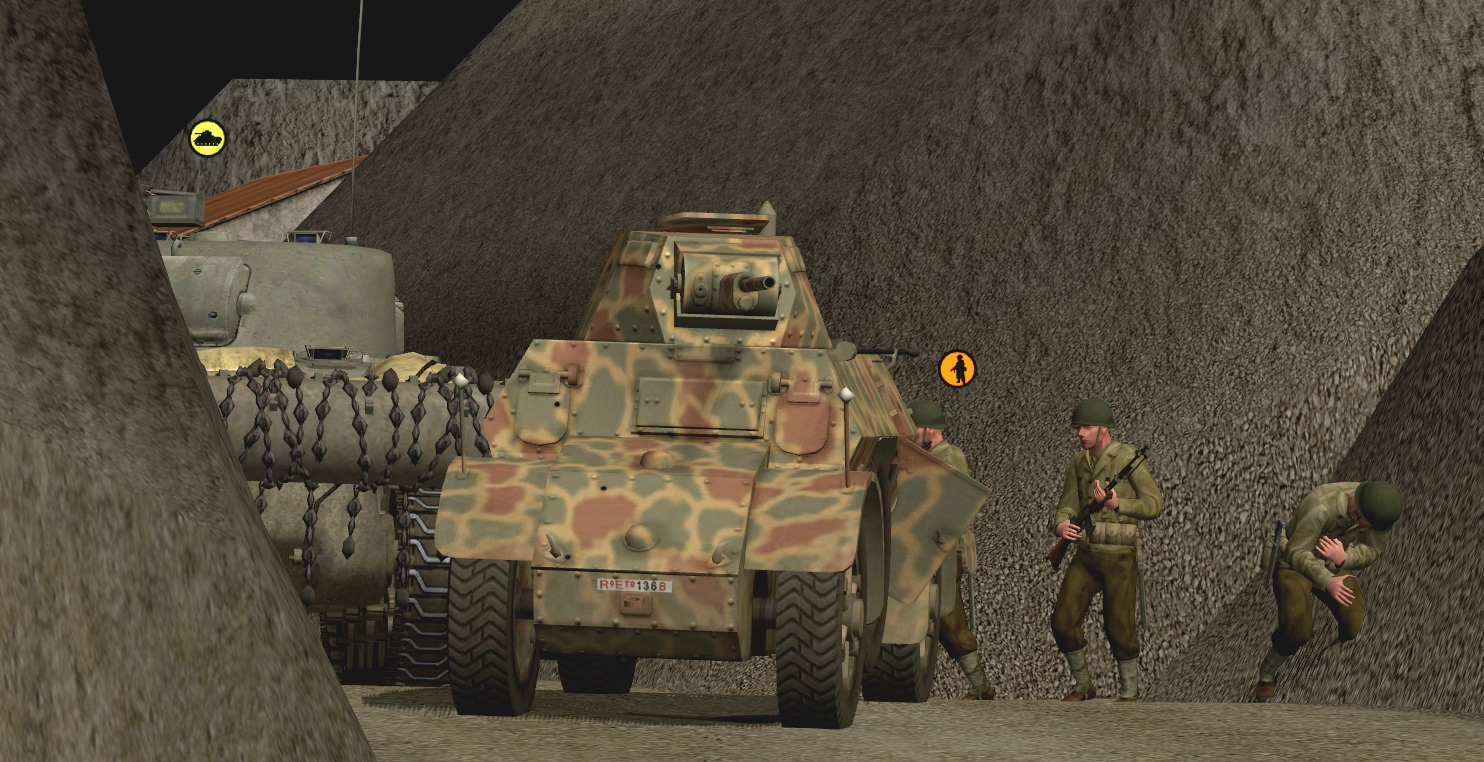 Crosbie's Crabmeat 1 spent much of the turn pounding infantry targets around the ZINC shack. 1st Squad Platoon HQ (Big Joe Rocca) never reached COPPER, going to ground when MG 42 rounds started whipping over their heads. 1st Squad A team showed more pertinacity, and is on the verge of entering the chamber off the ff column tunnel.

LEAD was tomb-quiet this turn. 1st Squad's B and C teams finished either side of the chamber's western exit. The row 3 tunnel appears to be deserted. 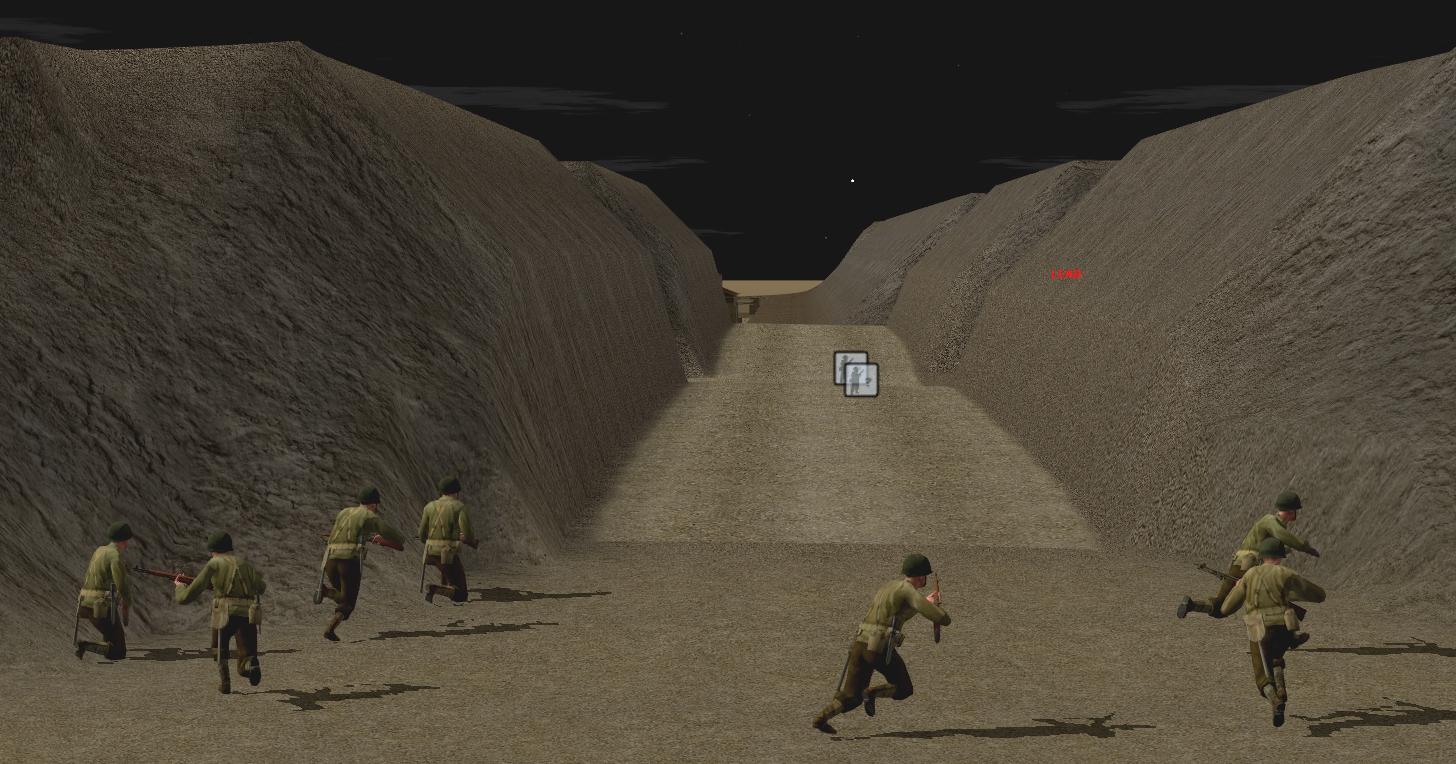 A minor snarl-up on the approach road (WeGo plus minefields plus CM's sometimes perverse pathfinding makes such occurences almost unavoidable, I'm afraid) explain why Singh's Wasp is currently sitting under the base's entrance arch and Ashbridge's Achilles is still fannying around circa ss11. 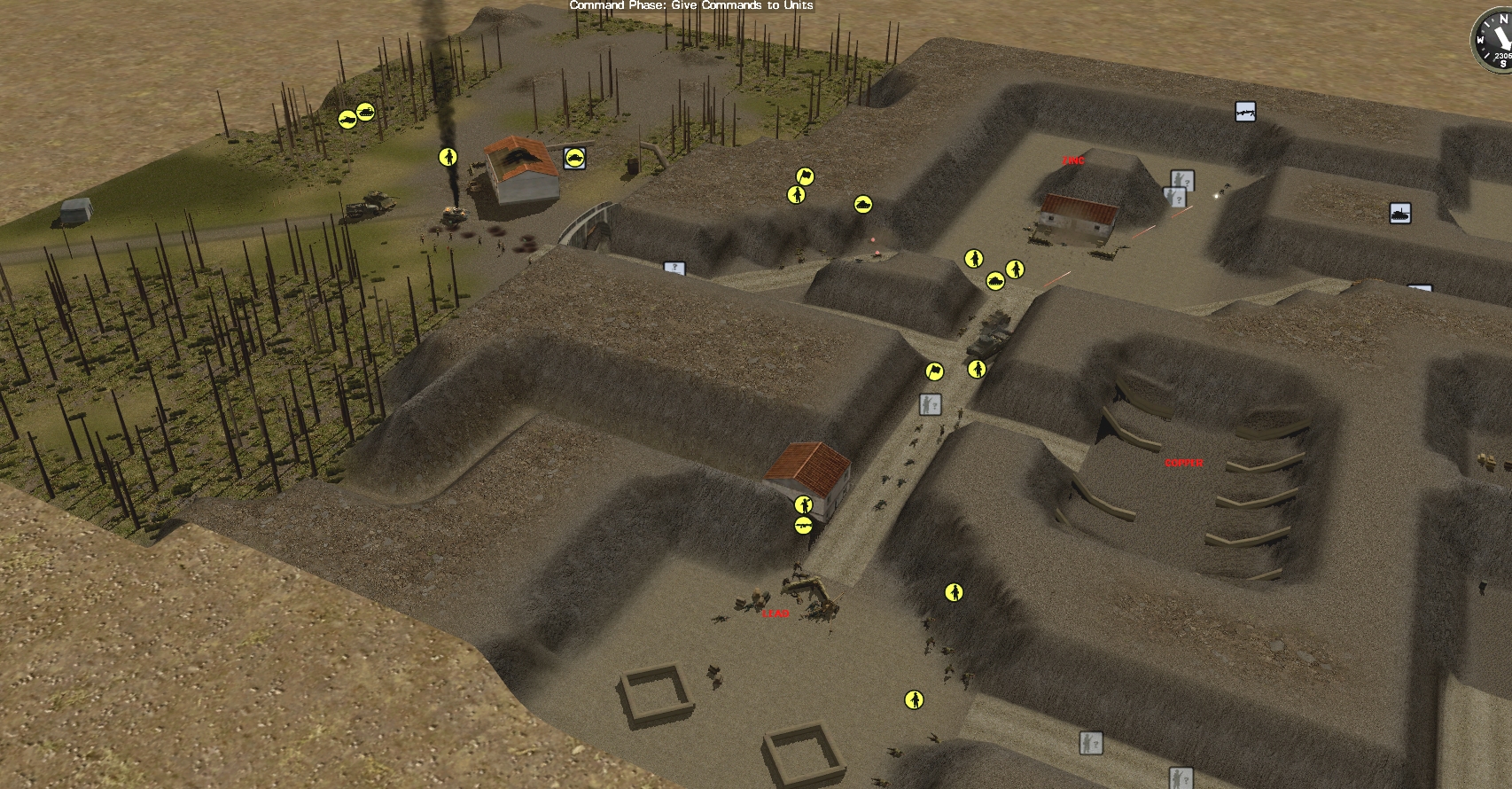 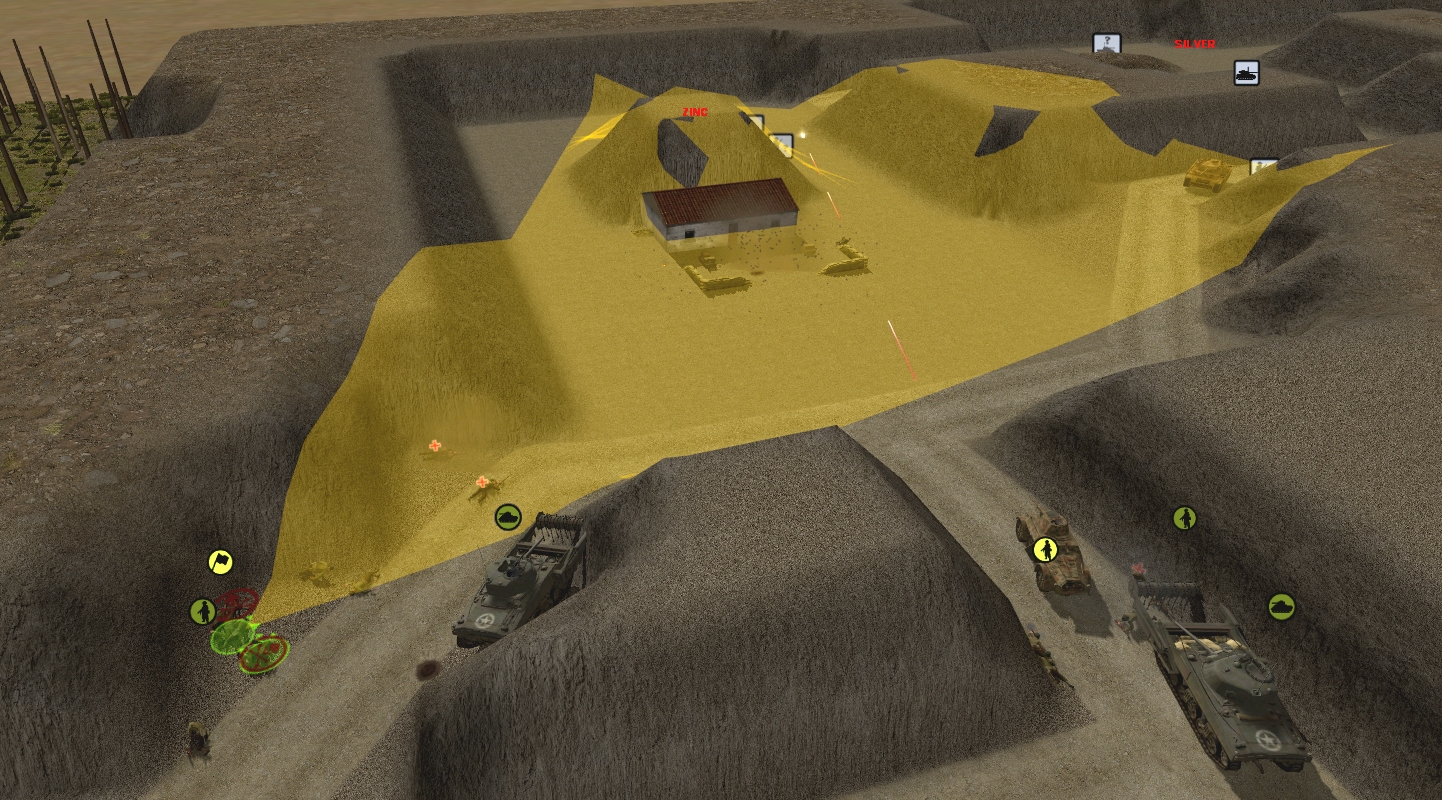 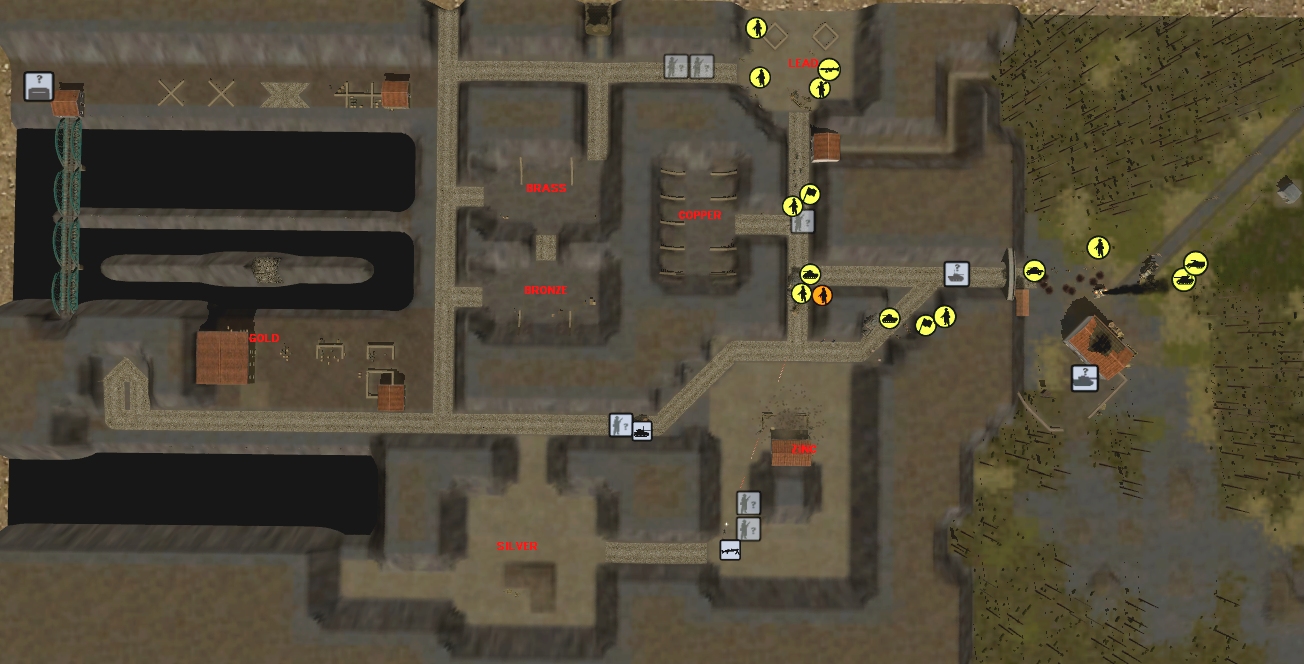