The Comment Commanders have a mere minute left in which to convince me that they control the soggy end of the subterranean submarine base (My verdict, along with sundry stats, will appear in tomorrow's epilogue - ETA midday). They choose to use that minute aggressively. While Crabmeat 2 ventilates the U-boat and 3rd Squad occupy the two-storey GOLD HQ, almost everyone else left standing is ordered to focus on the one landmark still in enemy hands - the gatehouse in the north-west.

Costello's men are about to enter the HQ when a dazed machinegunner exits the pillbox they've just KOed. Private Purchase, 3rd Squad's famously hyperopic marksman, is the first to react. Using his specially customised backwards telescopic sight, he spots the foe and eliminates him.

Purchase adds to his tally a moment later, breaking a US Army record* in the process. 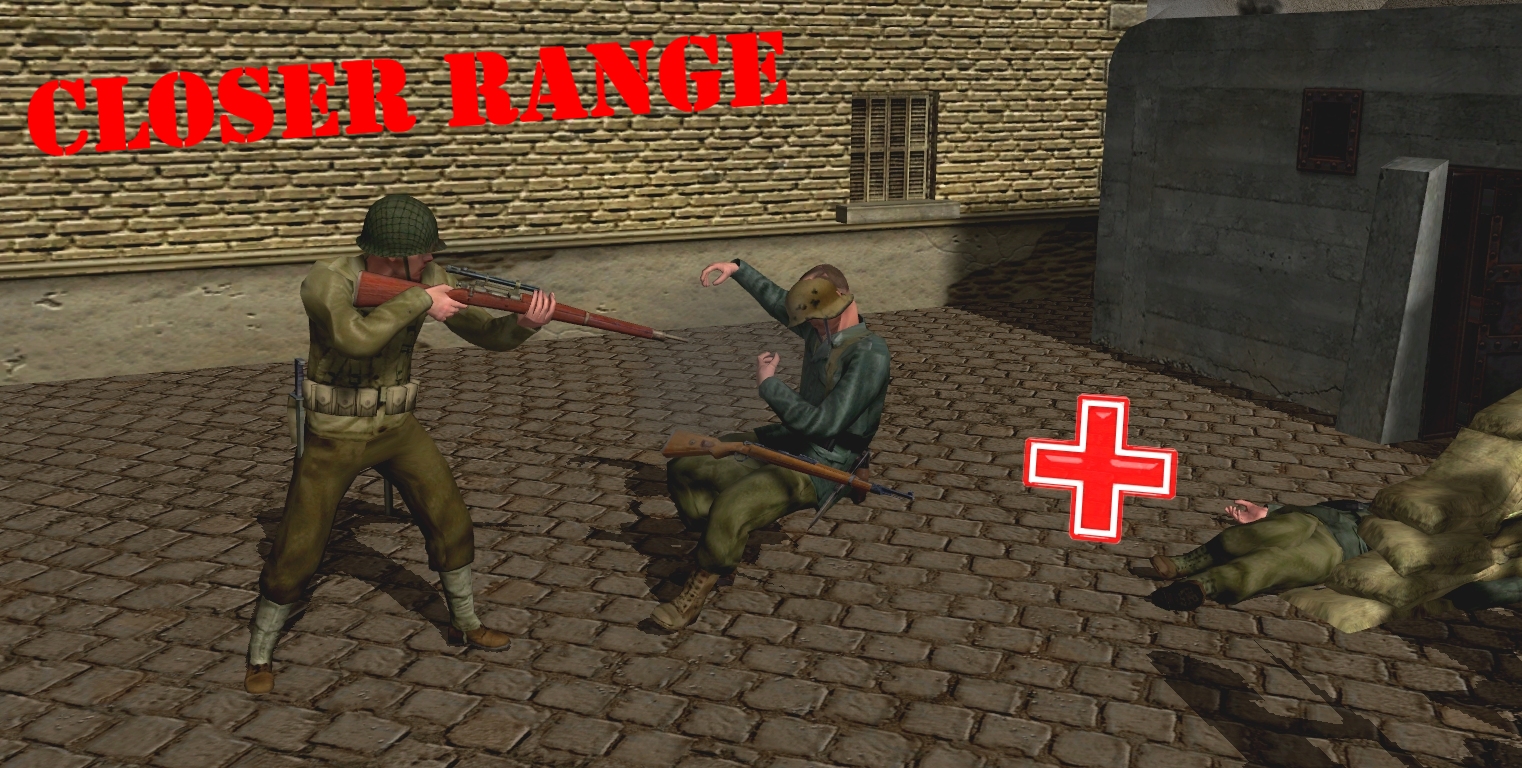 Concerned that the final turn might be a tad short of spectacle, at T+10 thoughtful Crabmeat 1 decides to explode.

She needn't have worried, Corporal Singh's pyromania is out of control. On its way to the northern quay, the Wasp takes it upon itself to singe infantry targets near the AC wreck...

...and the p4 cottage occupied by Rocca and what's left of 1st Squad.

1st Squad lose a man to the inaccurate inferno, Staff Sergeant Rocca his eyebrows and his temper.

It's hard to say who's to blame for the turn's other blue on blue incident. Crabmeat 2 slings the shell that flings the shrapnel that shreds the 3rd Squad rifleman, yes, but she wasn't to know that one of Costello's men would choose such a damn silly path to the GOLD HQ.

A chain of yellow path lines and white waypoint pyramids urge Lynch & Bishop, the marauding Marauder crewmen, to make for the gatehouse in the final minute of Colonel Croesus. For the first twenty yards or so, the two-man USAAF assault shows a smidgen of promise. The ominous slow-motion only kicks in when these chaps...

Hearing a strange strangled cry behind him, Lynch turns to find his buddy on the deck. 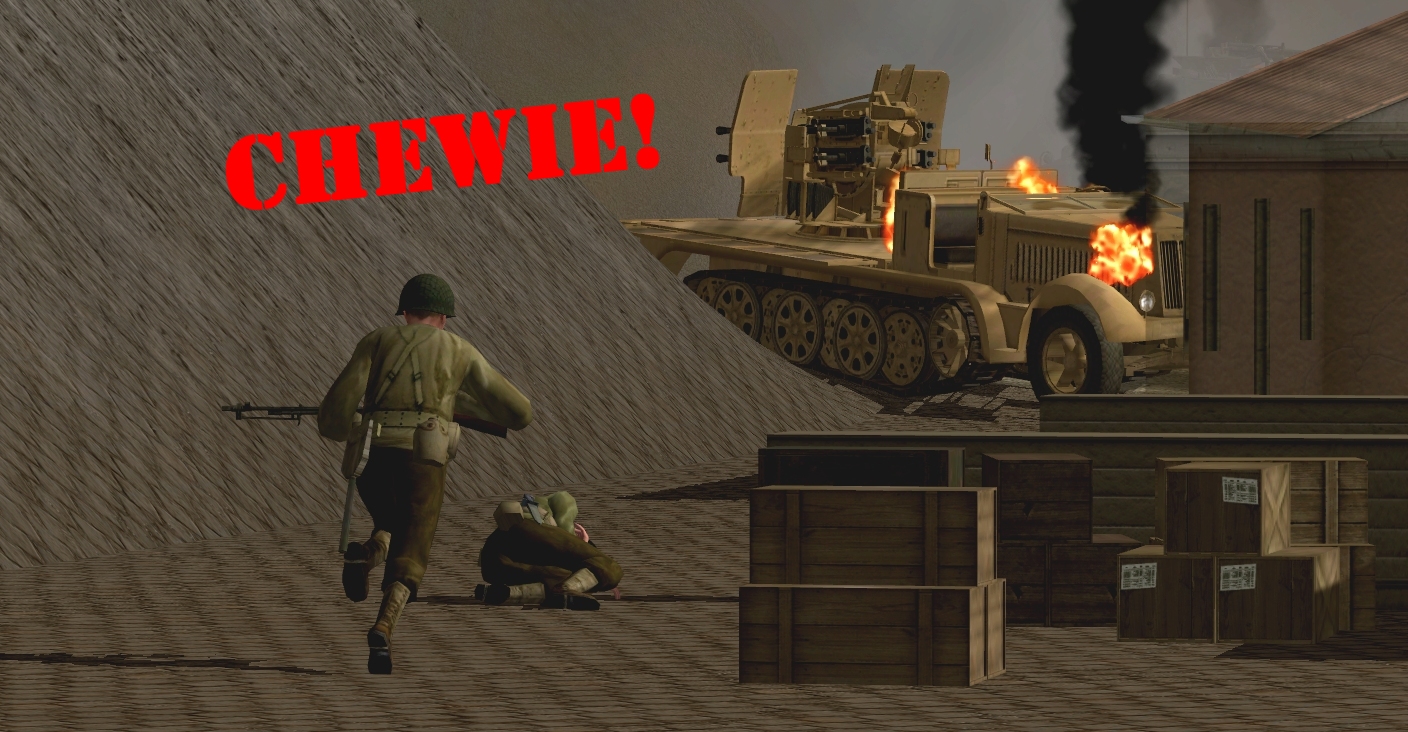 The attack is abandoned. Lynch backtracks keen to aid his stricken friend, but is forced to seek cover when the merciless MG 42 opens up again. Automatic rifle and Teutonic HMG swap salutations for a spell.

The B-26 pilot is hurriedly changing mags when an intervention by the Achilles removes the need for urgency. 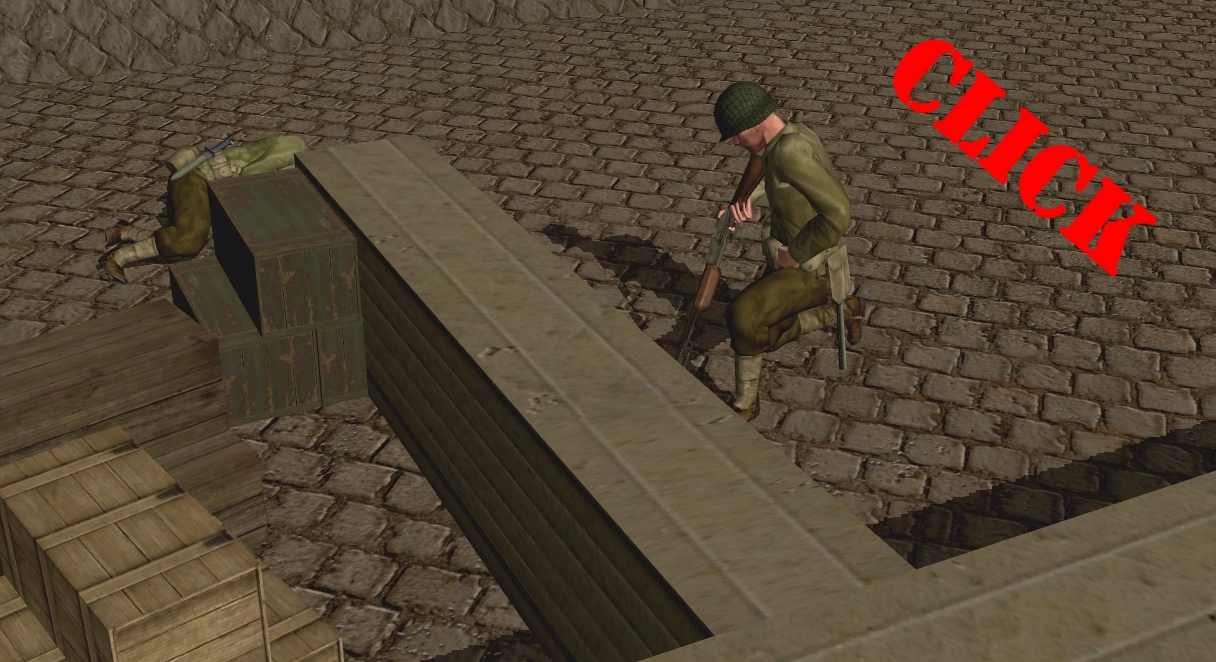 It wasn't one of Matthews' better shots, but the 17lb HE shell does the trick. The sound of ripping cloth ceases. 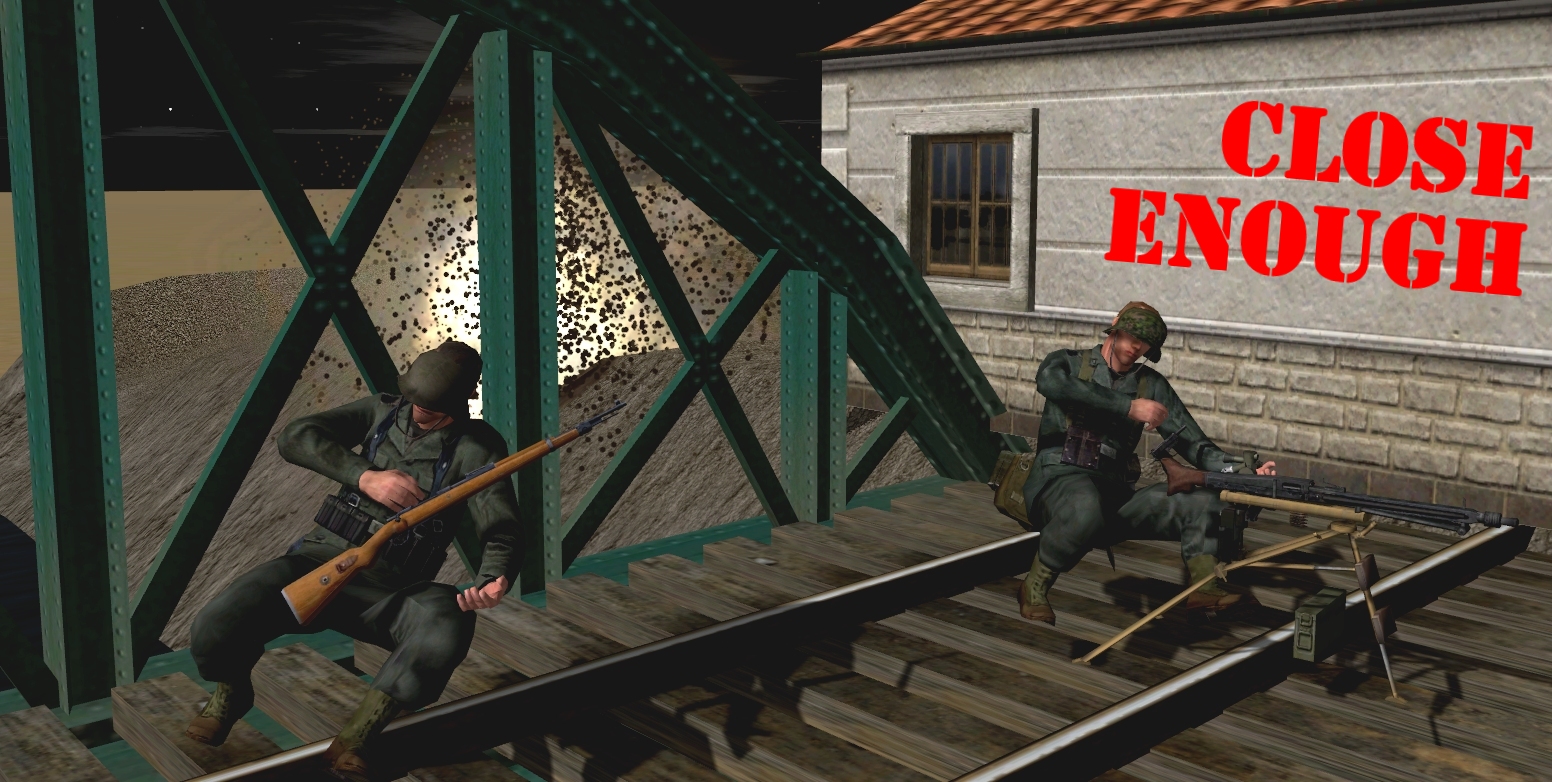 Is there sufficient time remaining for the Wasp to dart down the northern quay and torch the gatehouse?

No. Struggling to pathfind past the burning p4 cottage, and at serious risk of destruction from the enraged Rocca, Singh's flamer will play no further part in this story.

The honour of firing the last round in this year's co-op Combat Mission marathon goes to an inconspicuous German (?) biding his time on the pen gates. 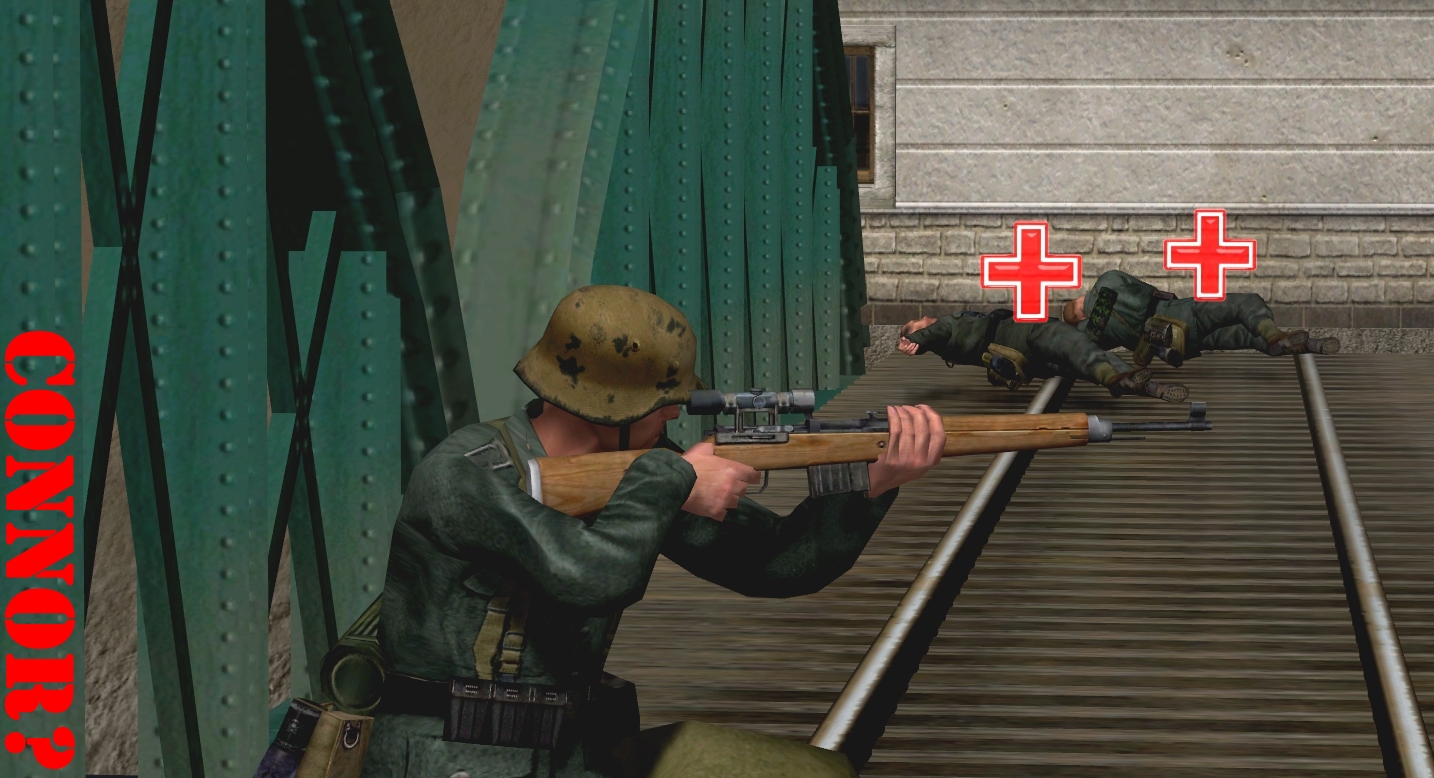 At T+57 a faintly familiar geezer with a scoped Gewehr 43 gets to his knees and looses the round that liquidates Lynch. 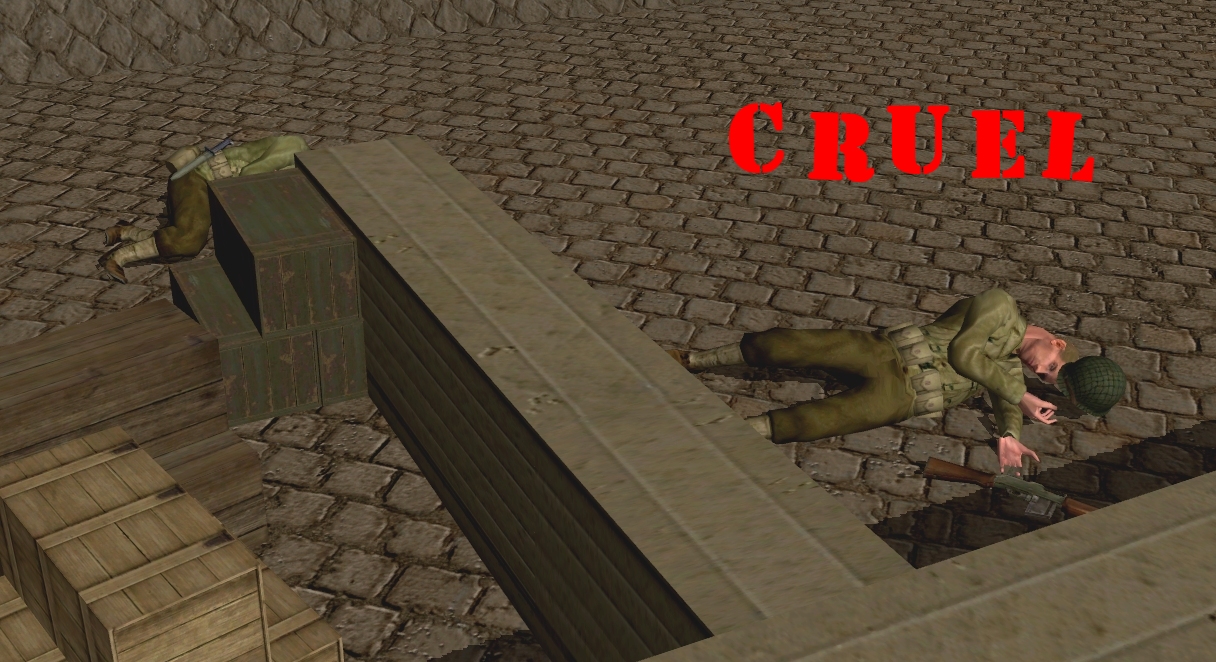