Cuphead[official site] first appeared way back at E3 2014, where it wowed everyone with its gorgeous 1930s style cartoon aesthetic and promise of tough as nails platforming action. It finally came out last Friday and boy, does it deliver on that promise.

Cuphead [official site] is like a bullet hell shooter where the bullets are more likely to be sentient balloon animals. The story is slight but delightful: after gambling away their souls, Cuphead (and Mugman, if you’re playing coop) take on the devil’s dirty work and set about collecting soul contracts across Inkwell Isle. Boss battles form the bulk of the game, with some occasional side scrolling platforming thrown in for variety. Those bosses are the star of the show however, beautifully brought to life by the unique hand-animated art style.

I’ve faced a telekinetic carrot, a pair of boxing frogs that eat other to turn into a slot machine, and a unicycling plane lady who can transform into a bull shaped cloud, two dancing cloud women and the moon. I’ll avoid spoiling any more bosses, because discovering each one (and the different stages of each fight) is the main joy of Cuphead. Gaining mastery over the challenge is satisfying, sure, but that’s nothing new - you can get that from your Super Meat Boys and your N Plus Plusses. Each of Cuphead’s bosses has more personality than can be found in the entirety of those games though. It sounds great too, with an original jazz score that perfectly accompanies the old timey visuals.

It never runs out of ways to surprise, with the bosses getting even more inventive as the game goes on. It’s also made me chuckle out loud a few times, such as when I landed the final blow on a boss and the two birds that were carrying him on a stretcher swapped out their medicine pills for salt and pepper shakers. Every animation oozes charm, from the dancing hourglass that appears on loading screens to the way Cuphead pulls up his trousers at the start of each fight. 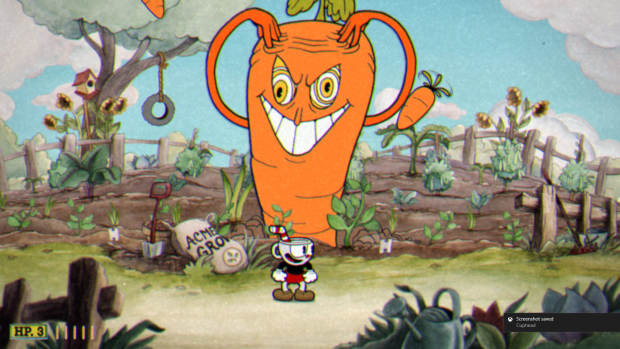 If you want to actually see those bosses though, you’re going to have to Git Gud. Each level can be played on ‘simple’ or ‘regular’ difficulty, but you only get to fight the last bosses once you’ve beaten the rest on regular. Simple mode slashes the bosses health pools and takes away entire stages from the fight, which it would be a shame to miss out on. It’s still a great inclusion as a sort of ‘tourist’ mode, however, and will allow a lot of people to appreciate a game they otherwise wouldn’t, while still rewarding those who persevere on regular difficulty.

In both modes, you can only take three hits before having to start over. That can be changed by placing a certain item in your charm slot, which can be bought using coins that you earn from the side-scrolling “run ‘n gun” levels I mentioned earlier. However, that charm also reduces the damage you do - and more importantly it would mean you couldn’t take a different charm that makes you invincible whenever you do the dash move. That one allows you to zip right through enemies, and I couldn’t imagine playing the game without it.

You can also perform parry slaps by pressing A just before you collide with a red object or red enemy. It’s a neat risk/reward mechanic, with a successful slap earning you a card towards the super meter. That super meter also fills up by just dealing damage, and can be partially drained to use an enhanced version of a normal attack, or by saving up all of it for a more devastating super move. 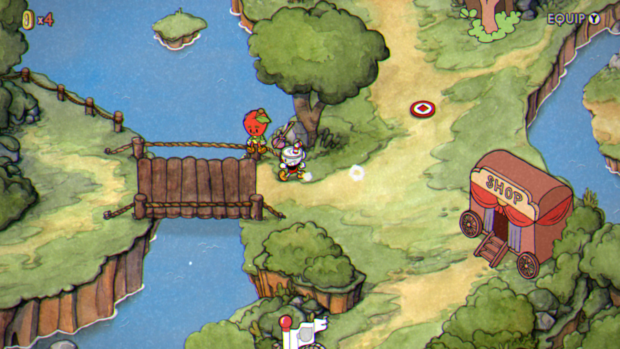 While you start with just the one gun, more can be bought, and it can be fun to experiment with their different normal and enhanced attacks. You can take two into each level: sometimes I managed to defeat a boss by picking a smart combination of weapons rather than relying purely on twitch skill. There’s a gun that auto-aims but does less damage, which I initially thought would only be a good option for when a certain stage needs you to focus on dodging. I’d forgotten to take into account that doing slightly less damage per hit doesn’t matter when there’s no need to ever stop firing. Pairing that up with the charge-up gun that doesn’t have an autofire and calls for precision shots meant I could do as much damage as possible in every situation.

Cuphead isn't just about reaction times and pattern-learning. I learned to sit back and rethink my approach to a level on occasion. Is that part of the screen as dangerous as I thought it was? Are those pink jelly beans easier for me to farm super meter cards from than I first thought? What if I try saving my super for that stage, or use enhanced attacks to get through that tricky section faster? It rarely feels unfair, although it sometimes took me dozens of attempts to work out how to beat the latter stages of a fight. You don’t get another chance to figure out how to beat those stages until you’ve gotten through the earlier ones again, which can be grueling when you know you’re only going to fail once more. The final bosses are particularly cruel in that regard, although I guess that’s to be expected in a game that places such a large emphasis on difficulty. 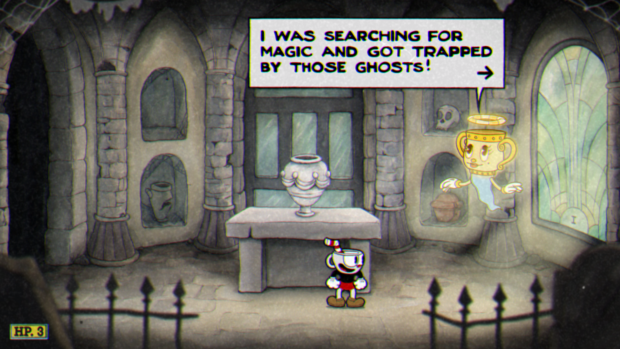 I ran into that old thing where failing multiple times at a level can make you frustrated and cause you to mess up earlier sections that you thought you'd already mastered, which leads to more frustration and more mistakes and ARRRGH. At several points I slammed my controller down and walked out of my room, only to slink back in again after a minute or two. “This time I’ll do it,” I’d say to myself, “this time will be the one.” It rarely was.

As frustrating as that can be, it was why I found myself punching the air in jubilation after difficult bosses. And they're all bloody difficult - but I wouldn’t have it any other way. If that sounds enticing rather than off-putting to you, then I can unreservedly recommend Cuphead. If not, then simple mode might still make the game worth visiting for those who just want to enjoy the delightful aesthetic, though it’s far from the full experience.