Okay, so nobody was accusing Disc Room of being short on blades. But as Devolver Digital have proven, there are so, so many ways to be sliced and diced by a room of spinning saws. Wrapping up today, the official Disc Room Game Jam over on Itch has summoned dozens of razor-sharp new takes on the game, from paint-splattered puzzles and household chores to an unexpected mash-up with one of the year's biggest games.

To kick of the jam, developer JW Nijman put together a handy video tutorial for creating your own bloody dodgems in GameMaker Studio, giving folks a jumping-off point from which to start getting weird. Can't have a disc room without discs, after all.

There's a wild breadth of remixes to check out over on the game jam's entries page, from minor edits and people's first projects to games that could be standalone gems in their own right. For the sake of brevity, I've cut (hah) out a few of my faves here, starting with a bizarre crossover with InnerSloth's backstabbing phenomenon Among Us.

Disc Us, by Mwaayk, is an online multiplayer twist on Disc Room that tosses multiple scientists into buzzsaw hell. Naturally, one of them is a Traitor, and while you're all off completing tasks across the map, one of you will be looking for the optimal opportunity to transform into a disc and slice up your poor pals. 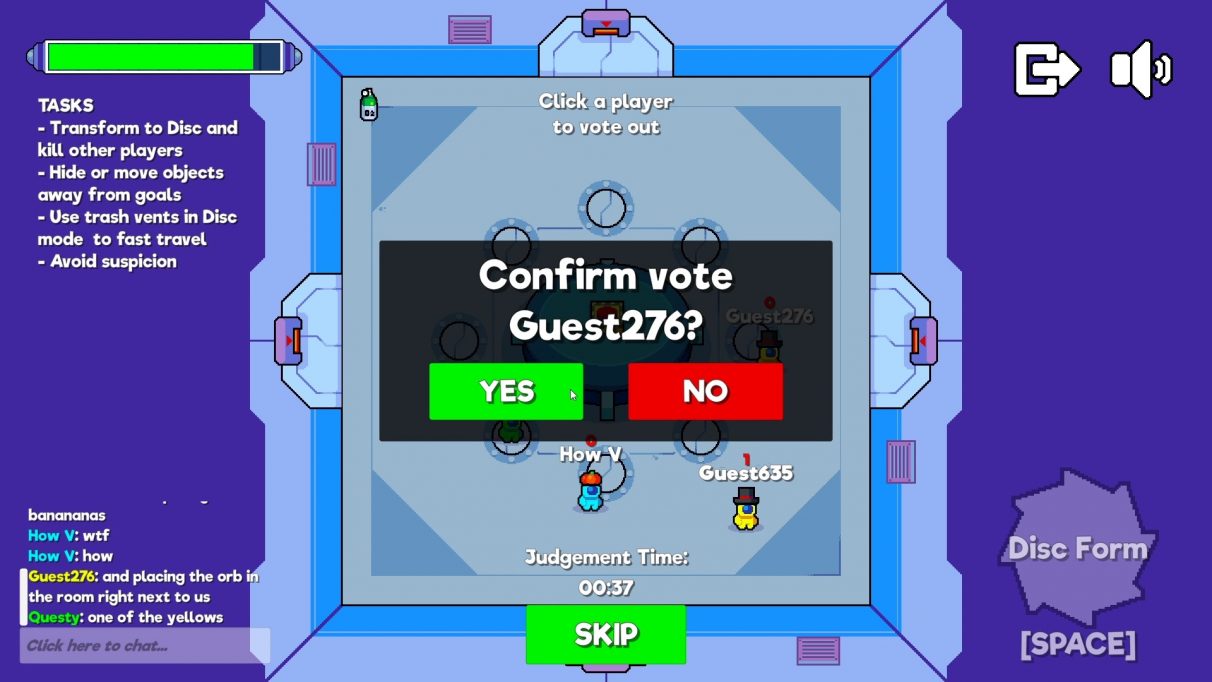 Dietzribi's Dish Room, meanwhile, removes the pain of decapitation by instead turning discs into filthy kitchenware. Running or dashing over discs cleans them, doing so again tosses them out of the room. Let too many dishes pile up, and it's game over. Discwheel (pictured in header), by 01010111, flips the controls by making you control the rotation of the room itself, rotating your wee pal away from incoming blades from off the map.

I could go on, from Benjamin Soule's paint-splatting blade puzzler Pigments to Dodgesaw's competitive bloodsports. It's just a shame that I can't seem to find Cukia Kimani's brilliant blade drifter from last week's Screenshot Saturday Sundays. While I fundamentally hate the idea of prizes in game jams, Devolver are handing out a bundle of their own games to the 10 most popular entries, with a saw-shaped vinyl soundtrack for the final winner.

They're all free, and many of them are playable in your browser, so why not spend this spookiest of nights figuring out how many ways you can chop yourself in half? You might even find yourself thinking up a few ideas for your own deadly saw chambers.