As you'll probably know by now, Watch Dogs Legion's big boast is its "play as anyone" feature, where you can recruit and subsequently play as any one of nine million procedurally generated Londoners. As I done said in my review, it works as advertised... sort of.

The level of simulation is dead impressive, and can lead to some interesting situations. But it leads to a lot of weird ones, too. Regardless of how well Ubisoft have concealed the practical limitations of this extraordinary system, we're just not at a point in game design where you can automate the generation of a character's appearance, backstory and personality, and have them walk out of the process as a believable and compelling human being.

Nightmare future London, therefore, is a great big stroll through the uncanny valley. At best, potential recruits feel like NPCs created on the spur of the moment, by a tabletop GM accommodating a player's insistence on talking to absolutely everyone in a throwaway tavern scene. At worst, they're... well, about the same, but if the GM in question was in the final stages of a gruelling, three-day ale monstering. And to top it all off, in addition to their so-near-yet-so-far position re: humanity, they all seem like extremely annoying people, thanks to the selection of Extremely Online hobbies and interests the game populates their biographies with.

Anyway, I thought I'd conduct a sort of half-arsed Voight-Kampff test, to see if I could find an NPC in Watch Dogs Legion who seemed like they might make for at least passable company, were I a dystopian resistance fighter. The sampling has been pretty much random - I fast-travelled to each borough in the game, using my magical future phone to download the personal profiles of the first people I saw, and screenshotted the lot. I will now go through them one by one, judging their worthiness, and moving on when I inevitably decide they'd be unbearable. Here we go: 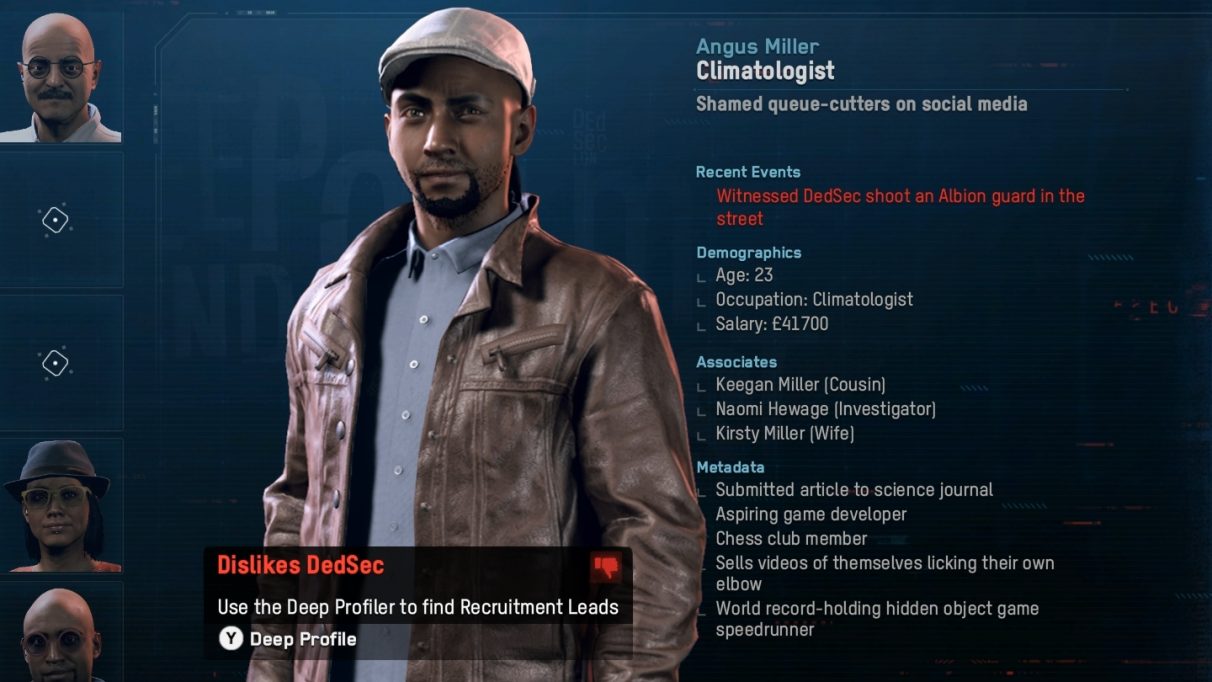 Angus almost seemed alright, to be fair - a strong start. Anyone willing to be a climatologist in the nightmare future is probably a pretty solid geezer, and they've even submitted an article to a science journal! Admittedly they also sell elbow fetish videos, but I don't want to yuck their yum. It was all going so well until I noticed that Angus' face is perpetually stuck doing the People's Eyebrow, a la Dwayne "The Rock" Johnson in the late 90s. I checked - it's always like that. I imagine him as being always one sentence away from finding a way to make the conversation about elbows, and I think that would get uncomfortable quickly. Next. 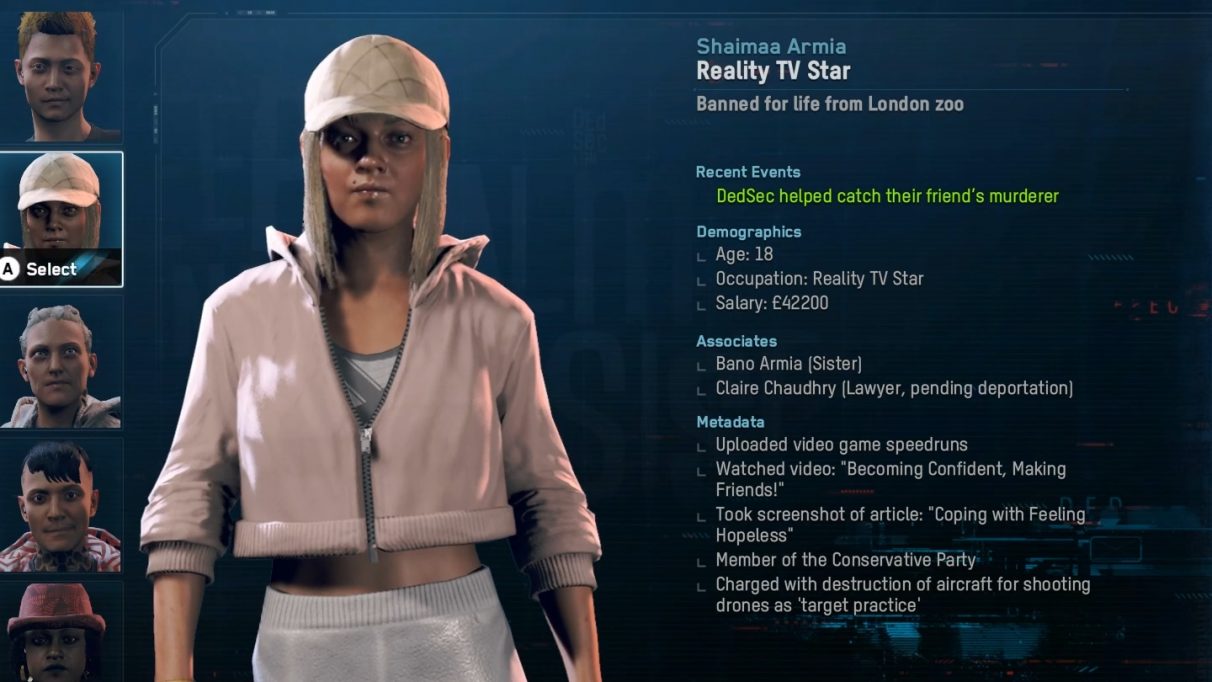 What a fucking bin fire of a human being. Apart from anything else, who joins the Conservative Party at age 18? That's chilling, for a start. No wonder she screenshotted an article on coping with feeling hopeless. But I'm sorry, if the subheading for your entire presence on earth is "banned for life from London Zoo", you're no friend of mine. Straight into the canal with her. Next. 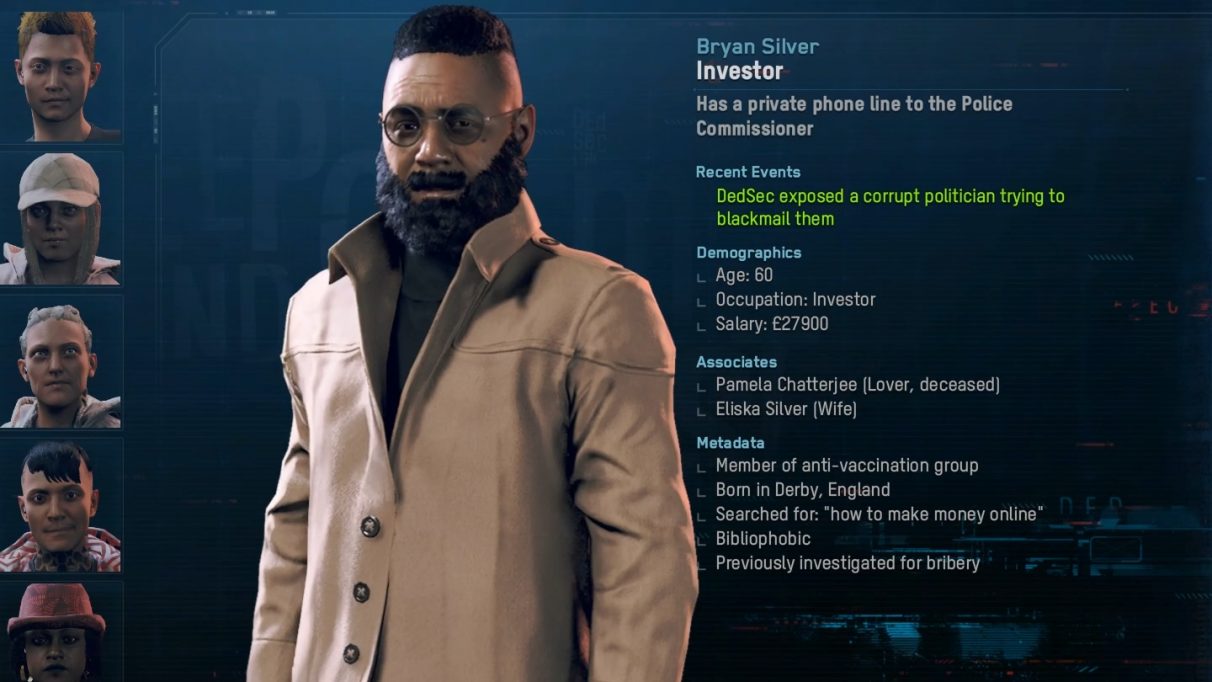 I don't know whether it's the Morpheus specs, but this guy has the energy of a role played by a young Laurence Fishburne, in a straight-to-VHS movie about sad policemen. And indeed, it turns out Bryan does have a private phone line to the commish himself, so he's well in with the fuzz. I must say, he looks astonishing for a man of 60 years old - maybe it's all those vaccinations he refuses to take. Still, even if it wasn't for that little yikes, the fact Bryan describes his job as "investor" without any further details means he is almost certainly a scammer. Search history backs it up too. Sorry Bryan, I'm inoculated against bullshit. Next. 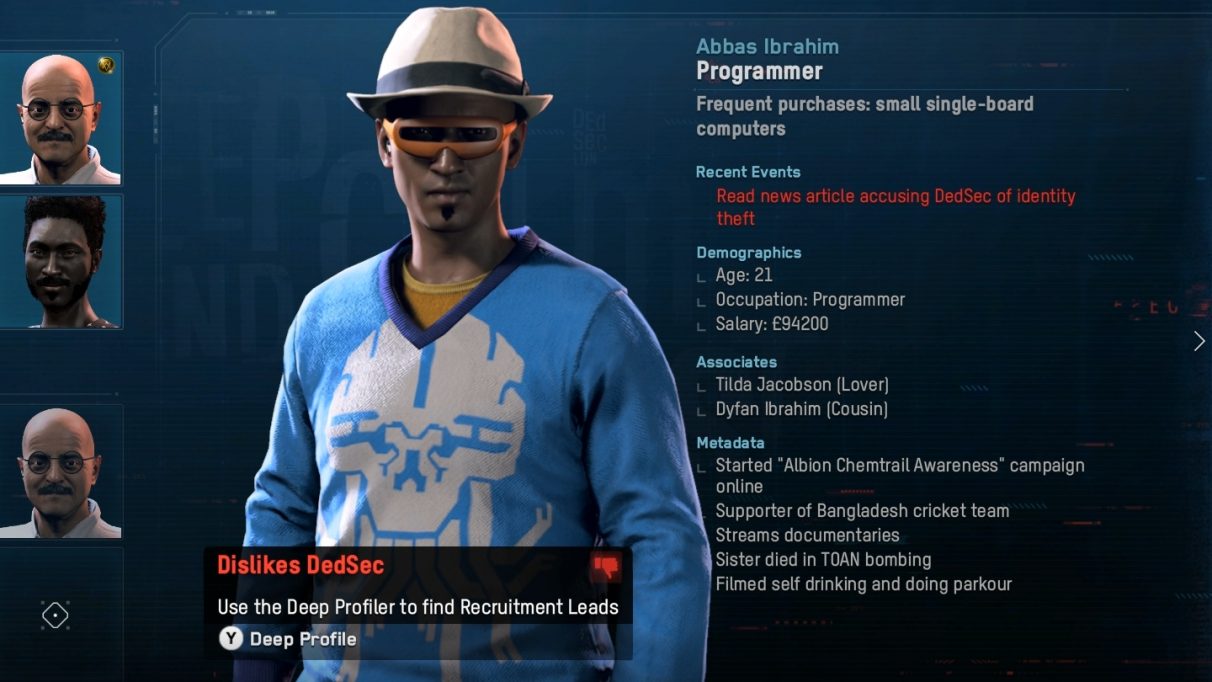 Ah, yes. It's Cyclops from X-men, re-imagined as a dejected incel on Christmas day. He does like cricket, but I know nothing about the sport, so we wouldn't have any common ground there. And besides that, Abbas seems mostly interested in chemtrails, as well as getting wankered and doing parkour. Disaster of a man. Quite like his necron Christmas jumper, but that's not enough to save him. Next. 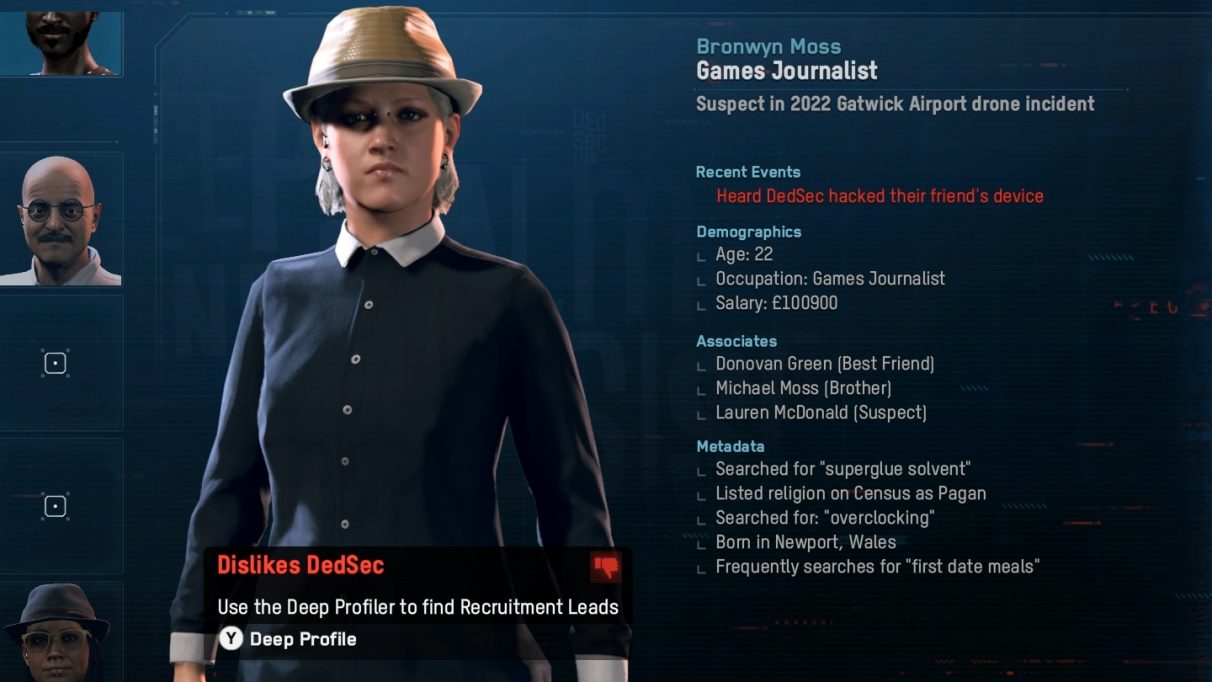 Look, I'm not proud, but I was quite taken with Bronwyn at first. She's a sharp dresser, I love the Welsh, and I'm always partial to a woman implicated in a drone incident. However, then I got to "games journalist" and "£109,000 a year salary", and couldn't stop laughing. Sorry Bronwyn, you cannot possibly exist. Next. 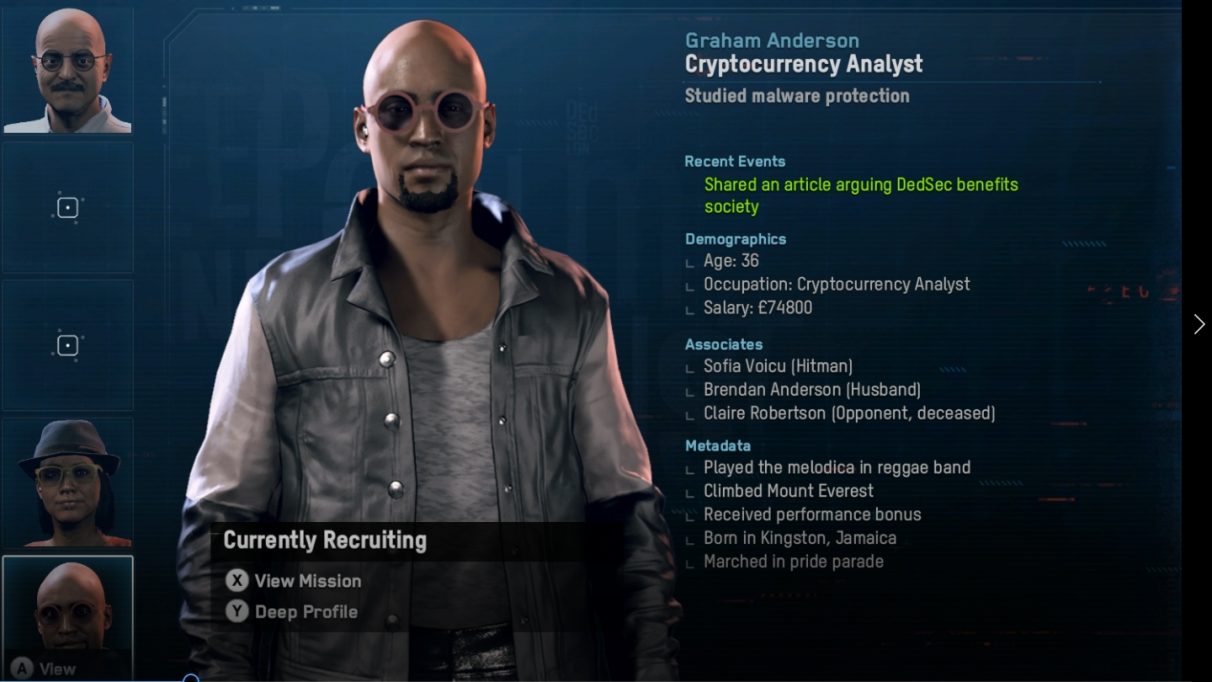 Graham almost got away with the fact he's a cryptocurrency analyst with the fact that he plays melodica in a Reggae band. That, after all, is an extraordinary sort of power. But the fact he's climbed Everest as well, and he's into "sharing articles"... I dunno. There's nothing ostensibly awful here - we're close - but Graham feels like the sort of bloke whose personality is exactly like the fake personality assumed by the Twitter account of an obnoxious Fintech startup, and I want to avoid him like a binbag of dogfood in midsummer. 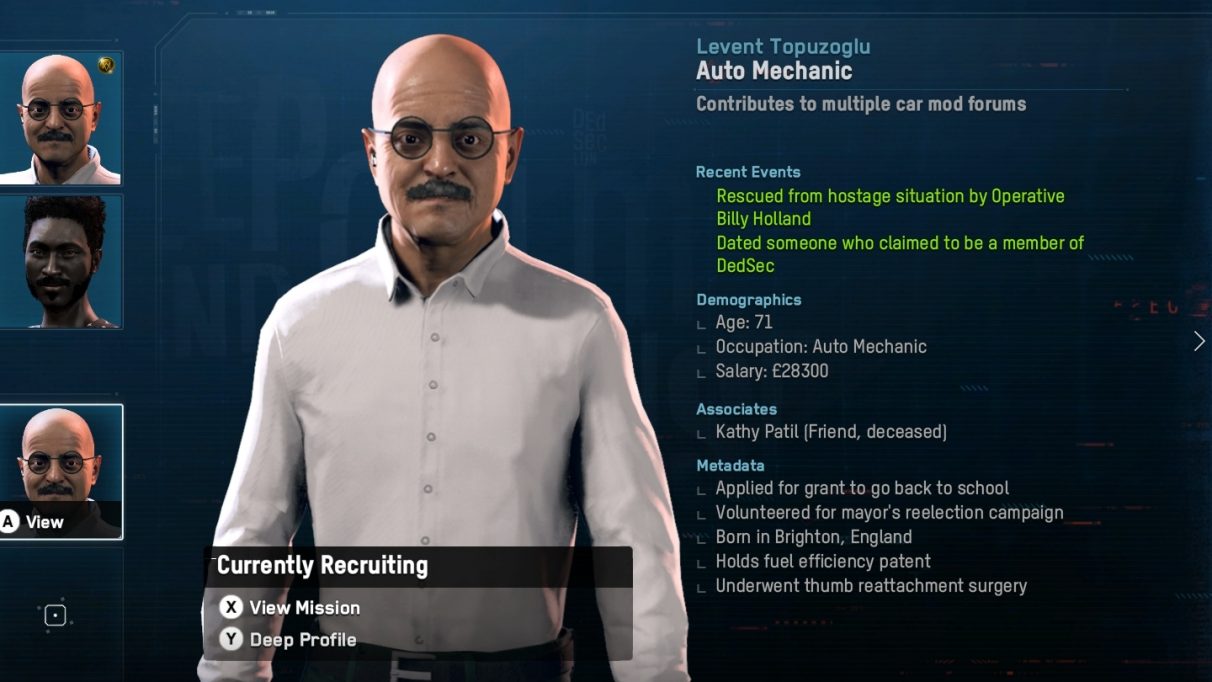 Ah! Finally, the hero we deserve. Part Ghandi, part Alf Garnett, all champion. Levent was doddering along the street extremely slowly when I found him, and when engaged with in conversation had a proper growly cockney accent. And unlike everyone else in the game, there's nothing needlessly techy in his background. He just likes cars, and mayors, and efficiency. He wants to be a bit more careful with his thumbs, but that's no reason to cast him into the dark. Welcome to the resistance, Levent, I'm sure we'll get along just fine.