Adding legal injury to public insult, Epic Games are suing Exciting Events, organisers of a disastrous Fortnite-themed festival in Norwich. The utterly naff-looking event made for some amusing headlines over the weekend, with the BBC covering it here. Despite the Fortnite Live festival invoking the name and using character art from Epic's battle royale shooter, it was unsurprisingly unofficial. In a statement to Eurogamer, Epic have announced they're taking legal action and have "issued a claim against the organisers in the High Court of London", which sounds serious.

The event itself was a glorious trainwreck with little in the way of Fortnite-themed anything, outside of some machines running the game. There was a climbing wall, a bouncy castle and a "cave experience" which was apparently just a trailer with a dark tunnel running through it. Quite what climbing and caves have to do with the famously outdoorsy shooter is beyond me. I could have forgiven the bouncy castle if it was purple and they called it Kevin, but they didn't even manage to get that part right. 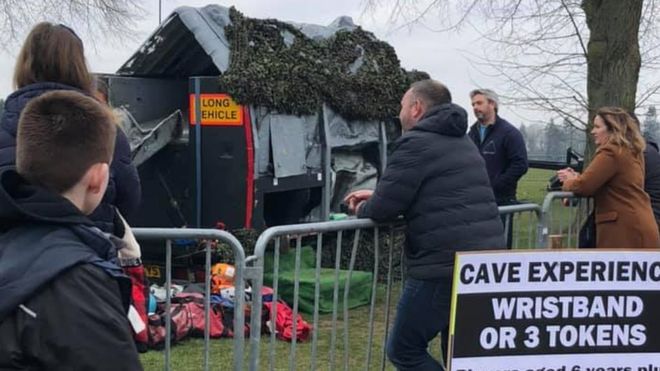 The whole event looked and sounded dismal to the point of parody, and the queues were massive, making the £12 tickets (or £20 for an unlimited pass wristband) even more galling. I'm reminded of cheap travelling fairgrounds, their rides invariably painted with airbrushed Disney and 80s action movie characters, but far worse. At least those fairs aren't tempting the fates (and prowling, hungry lawyers) by calling it Disney Live.

While I'm no expert, I'd expect this legal threat from a multi-billion-dollar corporate giant might throw a spanner in the works for Exciting Events. They already had further Fortnite-themed events lined up on their site, though I doubt they'll be happening now. Unshaken by the initial negative press, they were mulling over the possibility of the festival returning next year, according to the Eastern Daily Press on Sunday. Can't fault their optimism, if nothing else.