I am still very much riding the Monster Train. When you write a review as positive as the one I did for Shiny Shoe’s stupendous Slay The Spire-like, you do end up doubting yourself. Oh God, you think, what if it isn’t all that great, actually? What if this was one of those times where a game really specifically catered to my preferences, and my enthusiasm was overblown? What if I stop playing this in a few days, rather than the years (or at least months!) I anticipated. What if I’m bad, actually.

Yeah well forget that, because Monster Train is still ace. I want to talk more about why, and how other games can learn from it. There are loads of lessons I could choose from, but let’s start with clan combos. I think you could apply the principles here to almost any roguelike.

Before the start of every Monster Train run, you pick two factions from a pool of five. These decide your starting cards, and which cards you’ll see throughout that game. You'll have a primary and a secondary clan, which is important because your primary clan changes your Champion. We have now run into the problem with Monster Train where before I can explain the excellent idea I'm meant to be talking about, I have to explain some excellent others.

Champions have three different mix-and-matchable upgrade routes, and they’re often the most important unit on a floor, so you're immediately off to the super-varied races. You might choose a multi-striking Hellhorned Prince who gets a damage boost with every kill, and prioritise finding and upgrading a beefcake to stand in front of him. Or you might go for the Prince who gains armour every time he does damage, and play a much more delicate game where he dances about the front lines, occasionally stepping back so you can soak up damage with a disposable, low-cost unit. 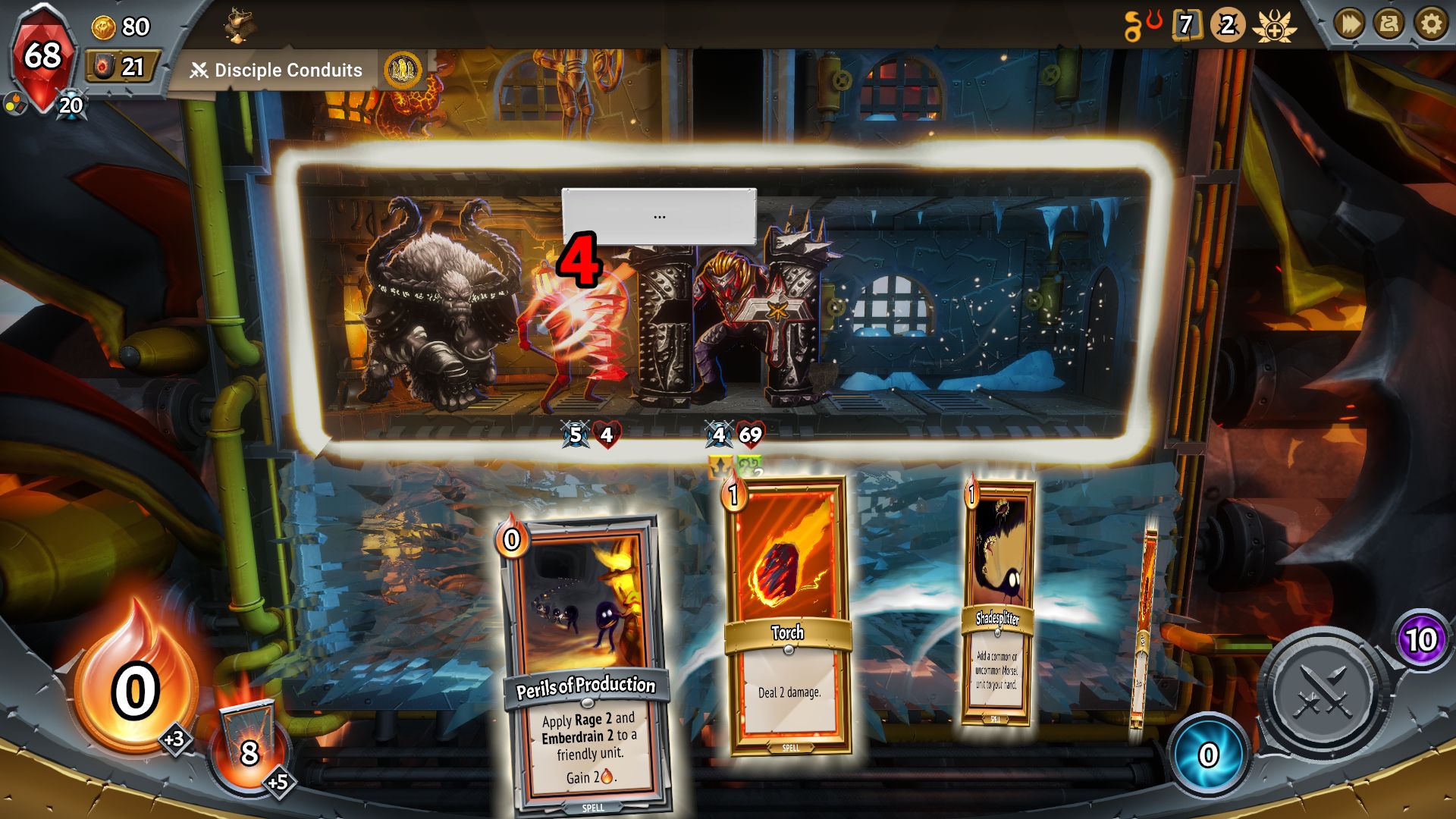 Then bam, along come clan combos. Aha, you'll think to yourself as you wrap up a run that ran dismally. What if I go with the armoured Prince, but instead of pairing him with high-health plants, I pluck my minions from the Melting Remnant? That's the fifth unlockable faction, made up of Victorian caricatures and sentient candles that love dying. They love dying because of various cards from that clan that can bring them back, but stronger. So you can have a frontline made up of ephemeral yet never-ending candles, with a Prince who has the space to rack up the survivability needed for the boss at the end of each level.

And then hey, look, that Prince also gets some Rage every time he gets hit, and here's a Victorian gentlemen who increases Rage on every Burnout unit every time he attacks... so now if you can apply the Burnout effect to that Prince (which makes him automatically die after a few rounds), then find a way to keep applying Burnout so he doesn't die, you'll have something glorious. Or maybe all of that is far too ambitious, and your train will splutter to a premature halt. 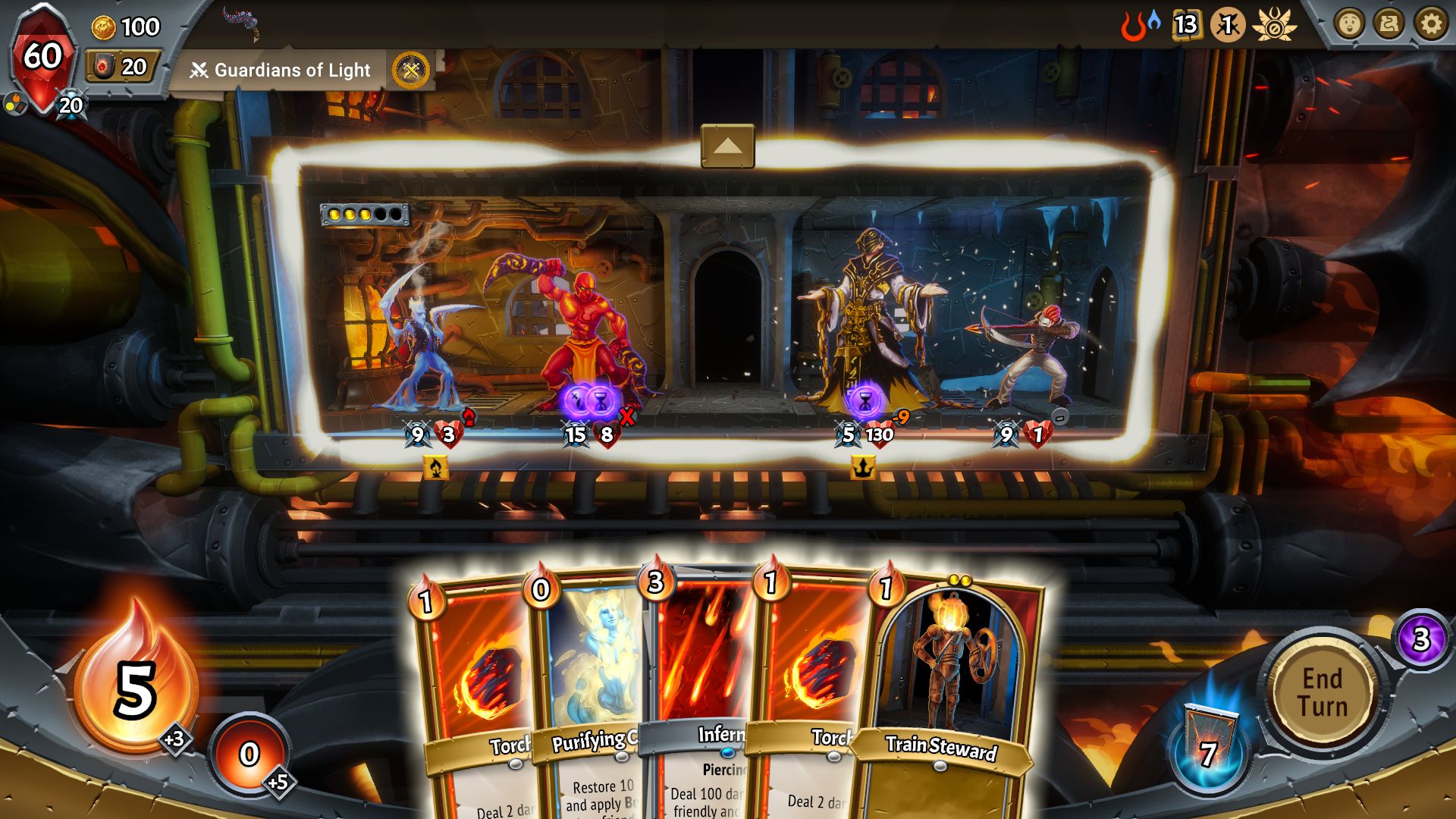 There are loads of (simultaneously very different) combos like this, and I hope you can see how it all slots together. Some faction combos work better than others (Umbra and Remnant are OP, pass it on), and I have had runs where I've packed my deck with cards solely from one clan - but the principle remains intact. I still feel pushed towards experimentation, and I still feel like I'm swimming in a sea of possibilities.

Even before you take into account Champion variants, faction-matching means there are 20 possible ways to start each run. You also get a bunch of random cards in addition to the usual starter ones, so your deck comes in slightly different shape each time. There's still a warmup period, of sorts, and when you've played for dozens of hours familiar patterns do emerge. But this is a clever way of mitigating much of that inevitable repetition, and I'd love to see other games spin up the same idea. It's not enough to give me distinct character classes, anymore - thanks to Monster Train, I'll always be wishing I could mash them up with others.

I'm coming for you, Brendy.