Deck-building roguelikelike Monster Train last night officially launched its mod support, after a short beta, opening it up to all sorts of player-made newness. Possibilities include new cards, new monsters, new looks, and so on, and I see some folks have already made a whole new playable faction. After seeing how much Slay The Spire mods shook up that other card-slinging dungeon-crawl, I'm dead keen to see what happens here. I'm already digging that fan-made faction, the floor-shifting Arcadians.

Mod support is now live, and you can hit the Steam Workshop to get going. Mods so far span the full spectrum of seriousness. The Stoker Deck Editor lets you add, remove, upgrade, and change your deck at will to fiddle with different builds or just cheat for funsies. Restart Battle Button adds a handy button doing just that. Hellhorned Friends renames the Demon Fiend and Alpha Fiend to Friends. And A Mod About Nothing replaces some sound effects and musical cues with Seinfeldian slap bass stings, audience applause, and sitcom outro tunes.

Perhaps the biggest so far, Arcadian Clan adds a whole new playable faction with 40 new cards, 11 new artifacts, and, for now, some cute placeholder art. They focus on bouncing units around floors, with some who fall, some who rise, and all sorts of perks coming with movement. They're shaping up to be an interesting Clan with lots of potential for cool tricks and plays, though I'll need to play more to really tell - quelle dommage. Heck, I still don't have the full measure of the new subfactions added last month.

The patch notes detail a few other changes of note. Bone Dog, who I've never seen despite playing enough to hit Covenant rank 20, is now in his own event so we can meet him more. Three champion forms - Rector Flicker's Dark Calling (the one which revives units each turn), Solgard's Titanchannel (the big'un which needs spells to unphase), and Penumbra's Glutton (the one turbocharged by eating) - have been buffed. And lots of the Melting cards which affect Burnout are better now. Some good balance changes there. Adds a colourblind option as well. Improve load times and reduced memory consumption are listed too.

Oh, and because it's Halloween, your train is temporarily spooky. Jack-o'-lanterns are lit, bats are flapping about, Train Stewards have pumpkin heads, and oh my goodness I just saw the Rubble Morsel is carrying candy corn instead of an energy orb. I wonder what else is spookified. 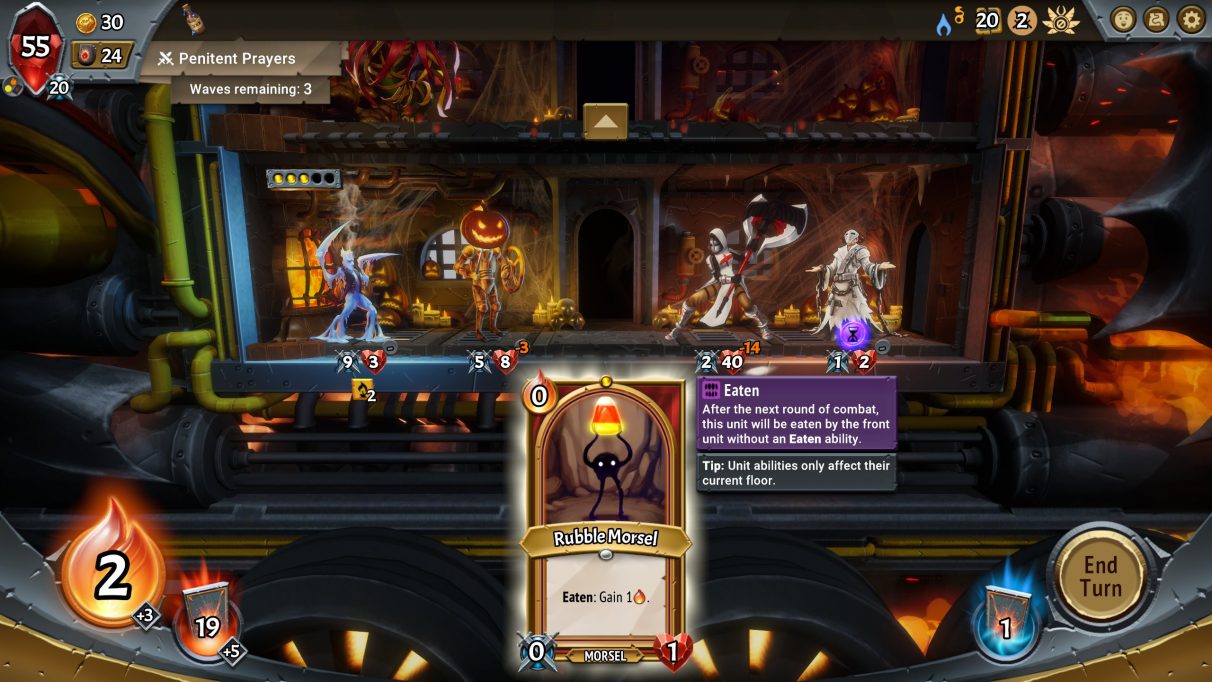