If you click on a link and make a purchase we may receive a small commission. Read our editorial policy.
This is The Mechanic, where Alex Wiltshire invites developers to discuss the difficult journeys they’ve taken to make their games. This time, Monster Train [official site].

Monster Train is a game about chuffing through the hills and vales of Hell while mincing up angels with your demonic fiends, angry plants and waxen gentry folk. As Matt has declared, it’s extremely good, and one of the things that I love about it is the way it escalates. That train ride you’re on is a wild, careening one into multiplying attack and defence.

The result is a sense of soaring power. And the coal that fuels that engine is the fact you can upgrade your cards, giving them buffs and boosts that often feel like you’re breaking the game. Monster Train’s upgrades are great.

You can, of course, also upgrade your cards in Slay The Spire. But there, each card can only be upgraded once and only in one pre-determined way. That’s because Slay The Spire is sensible and restrained. 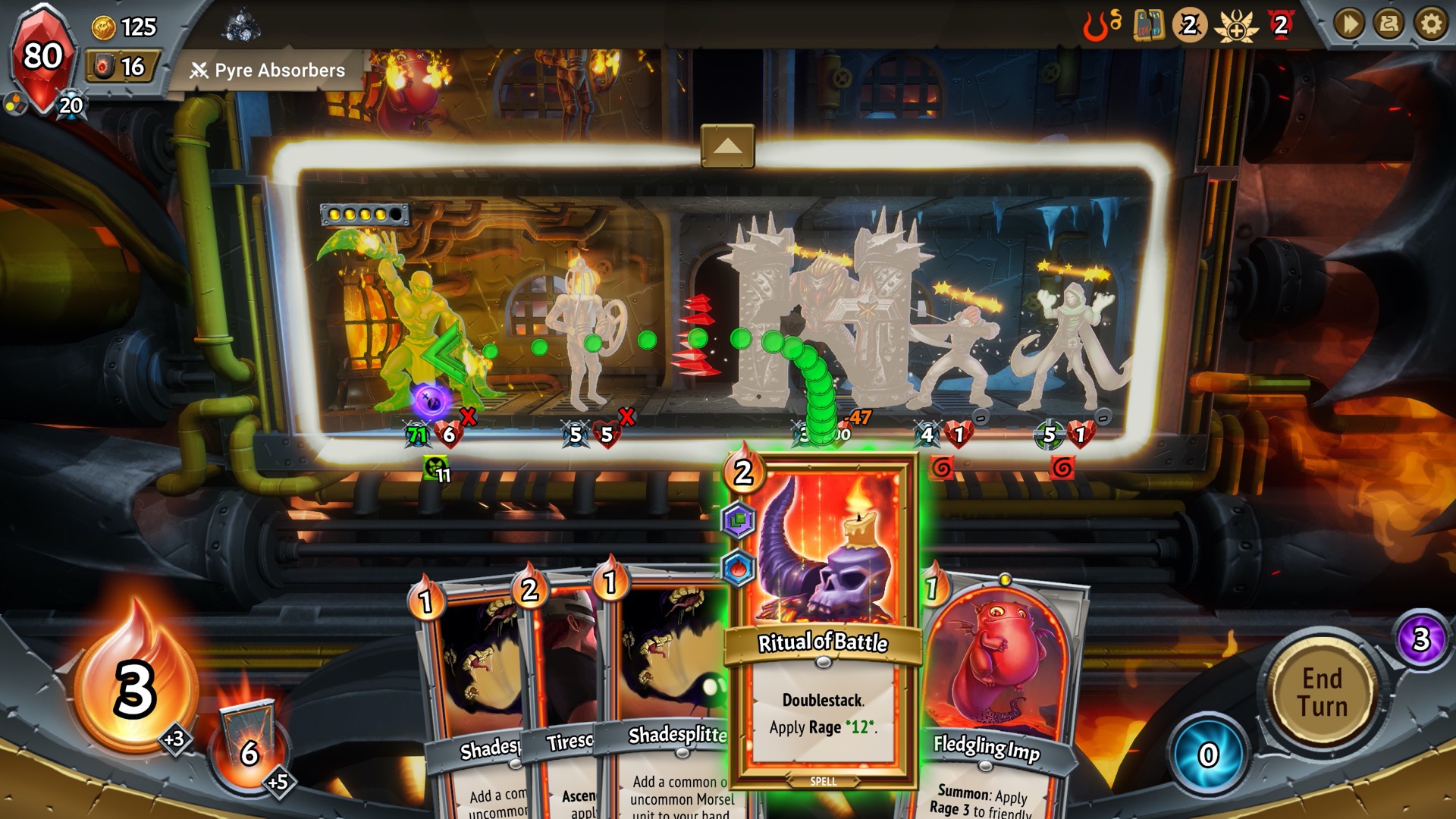 Monster Train is not sensible and restrained. Upgrades come in many forms, reducing cards’ costs, raising attack values, affecting the way they’re drawn. Whether your card is a unit -- a creature you place in your train to defend it against the attacking angels -- or a spell you cast to deal damage, or heal and buff units, you’ll get lots of opportunities to improve it.

The result is that you can create swaggering monsters of cards. Cards that smash all opposition into dust, cards that trigger multiple times per round, cards that are guaranteed to draw next turn. Cards you can design a deck around. And if that isn’t enough, you can then duplicate the things, filling your hand with banger after banger.

The result is that you feel like the master of your deck, the architect of chaotic numeric abandon. But don’t think for a moment that it means Monster Train is profoundly imbalanced or easy. As Mark Cooke, head of maker Shiny Shoe, told me, “A lot of people think, when they play for the first time, that the game is ridiculously overpowered. But in the end it doesn’t turn out that way.” 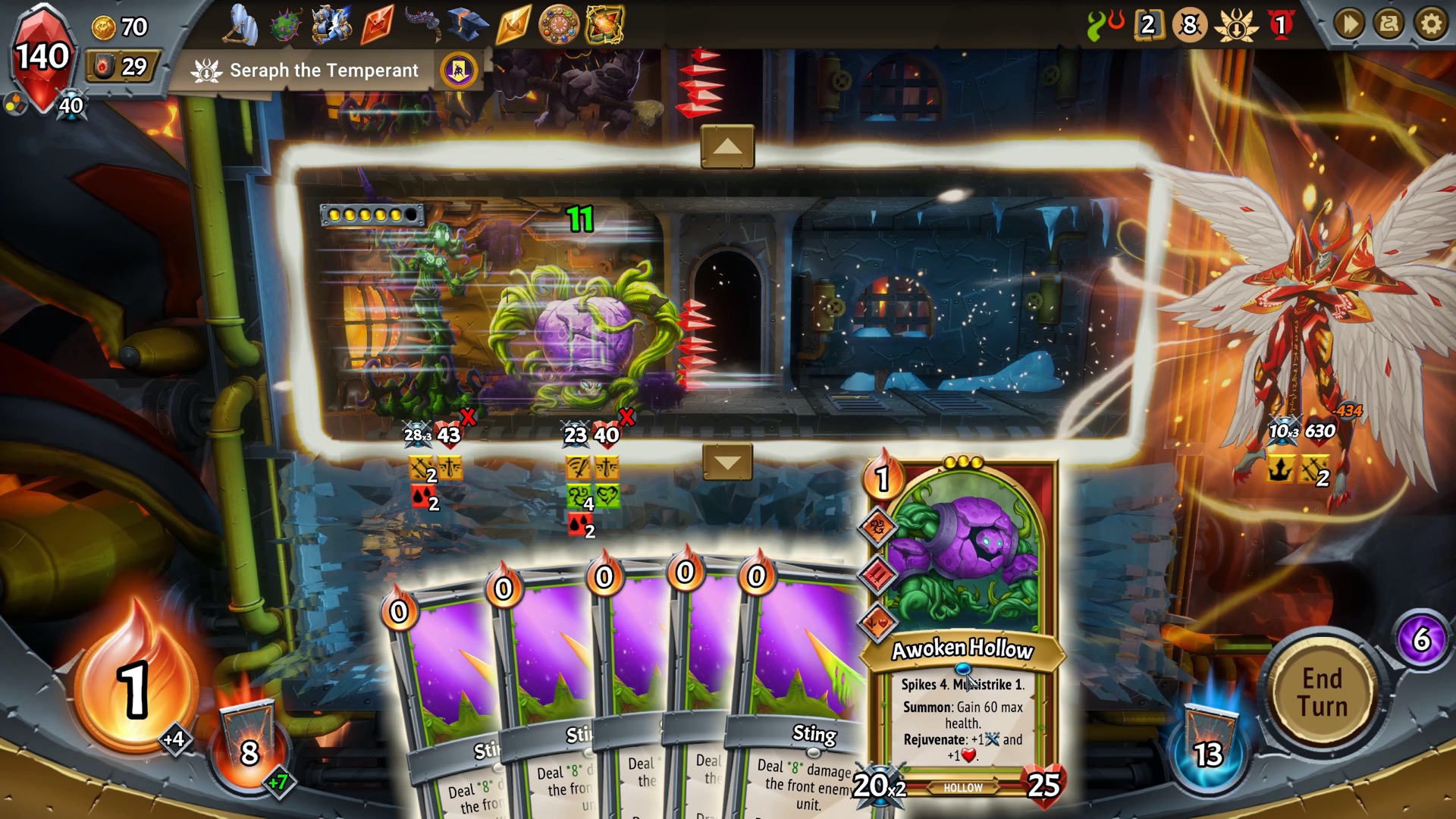 Monster Train is a study in how to control apparently boundless power. The decisions its developers made to get to where the game is today show the ways they’ve aimed for exciting excess, and then focused it on delivering a constant stream of interesting choices.

Like, for example, the number of upgrades you can slap on to a unit. For a lot of the Monster Train’s development, you could upgrade them as many times as you liked. The result, as you can imagine, was that every player would set out to make one mega unit every time.

“It was kinda fun,” says creative director Andrew Krausnick. “And actually it worked pretty well, especially for units, because they’d stick around and you’d get their benefit constantly. That was authentically fun and there was still challenge. But also it was limiting.”

“It started to become the degenerate strategy because you should always do it,” adds Cooke.

They noticed, you see, that players weren’t having to think very hard about each opportunity to buy an upgrade. Without a limit, they just bought everything they could. So, to raise the weight of each decision, the team raised how much upgrades costed. 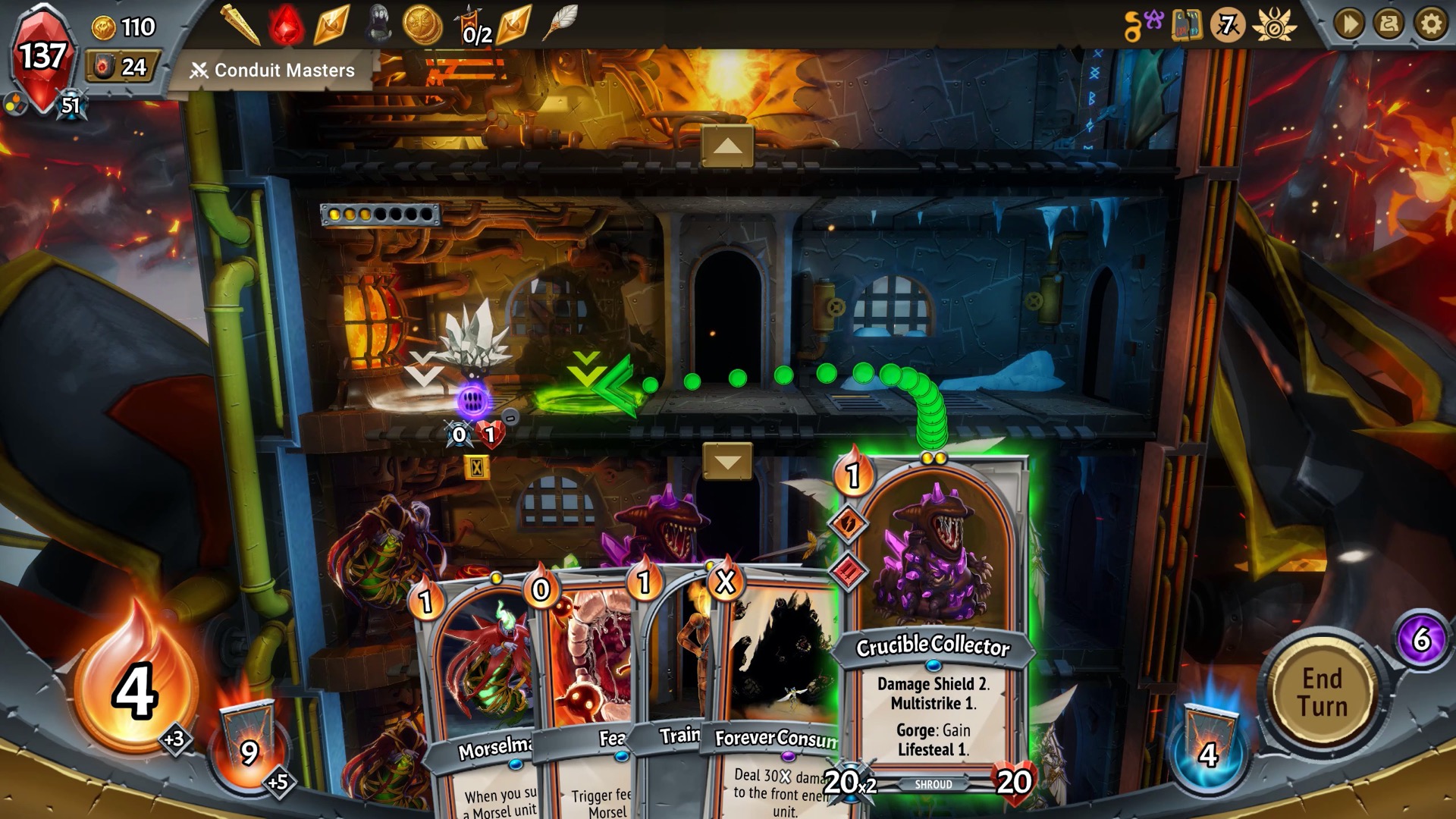 But then they realised that they’d stopped players from getting to play with lots of upgrades, so they tried a different tack by bringing down the cost of upgrades again, and adding a new kind of cost: limited upgrade slots.

“There was a lot of debate, but we tried it out,” says Krausnick.

“We started with three,” says Cooke.

“And even that felt low compared to what we were doing before! But we could bring the coin cost down and let you buy more upgrades, which was more fun because you were making more choices.”

The decision was so successful that they again reduced the upgrade limit to today’s two. With standard upgrades costing a fraction of what you earn each battle, they’re always affordable when you get one of your frequent chances to buy them from the shops that pop up between battles. One shop specialises in unit upgrades, the other in spells. 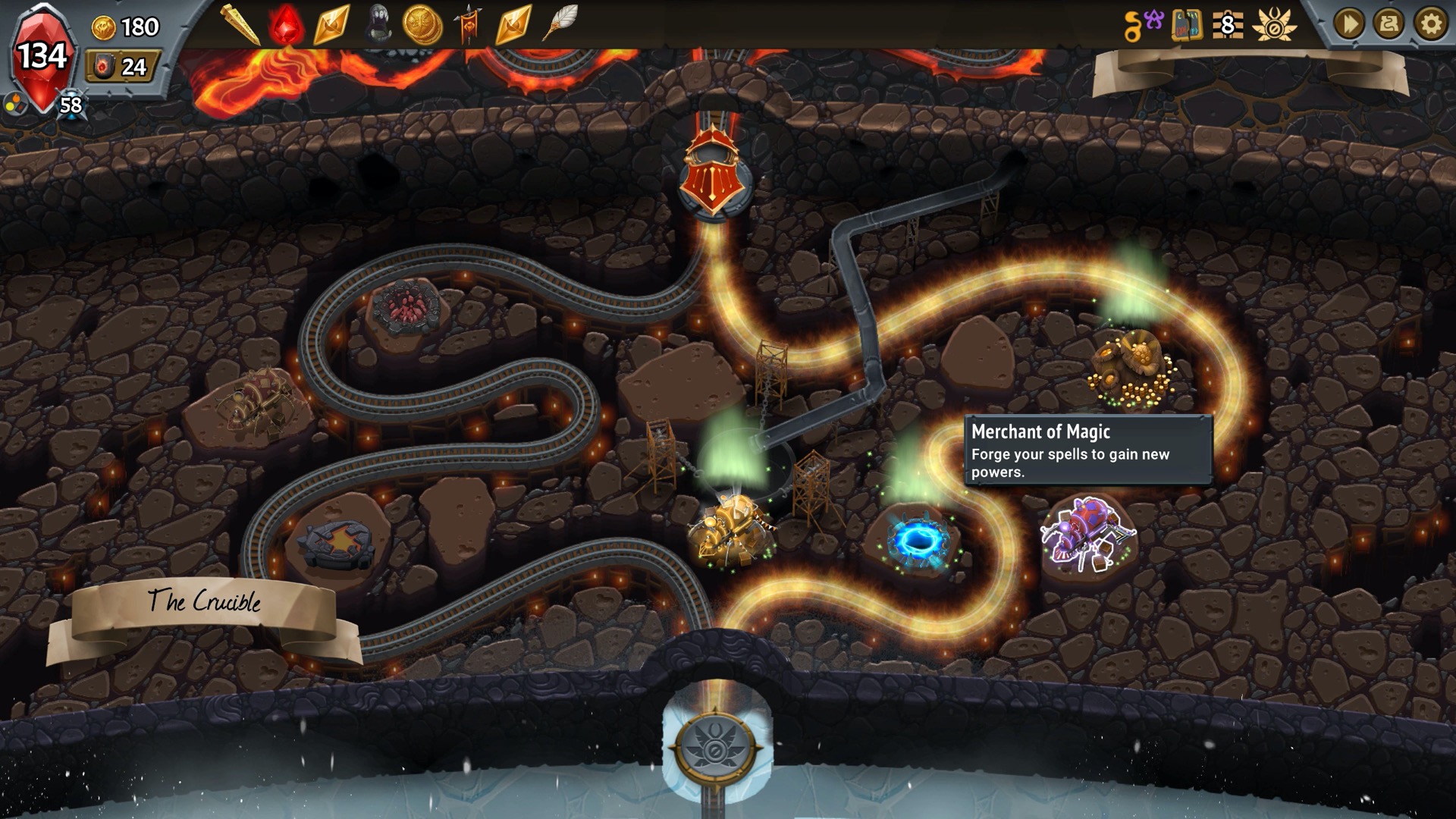 But while they’re cheap, the limit poses difficult decisions, as Cooke says. “A constant thing I face is, do I want to take the upgrade now to increase my power in the early game but isn’t the exact one I want? Or is that going to backfire when, two rings of Hell later, I see exactly what I wanted and now my unit’s slots are full?”

Did the team ever consider allowing you to remove upgrades from a card? “It’s definitely come up!” says Krausnick. But it wouldn’t necessarily be good for the game.

“The thing we often find interesting with these games is imperfect choices. If a choice is ever perfectly clear then it gets boring. If you always know to upgrade because you can remove them later and add new ones, I think that becomes clearer decision-making, whereas right now you’re making these bets.”

Look at the early game, during which you’re always under pressure, having to roll with a deck that includes random cards. Shiny Shoe wants you to invest early in upgrades, not save up your coins and wait for the perfect opportunities. 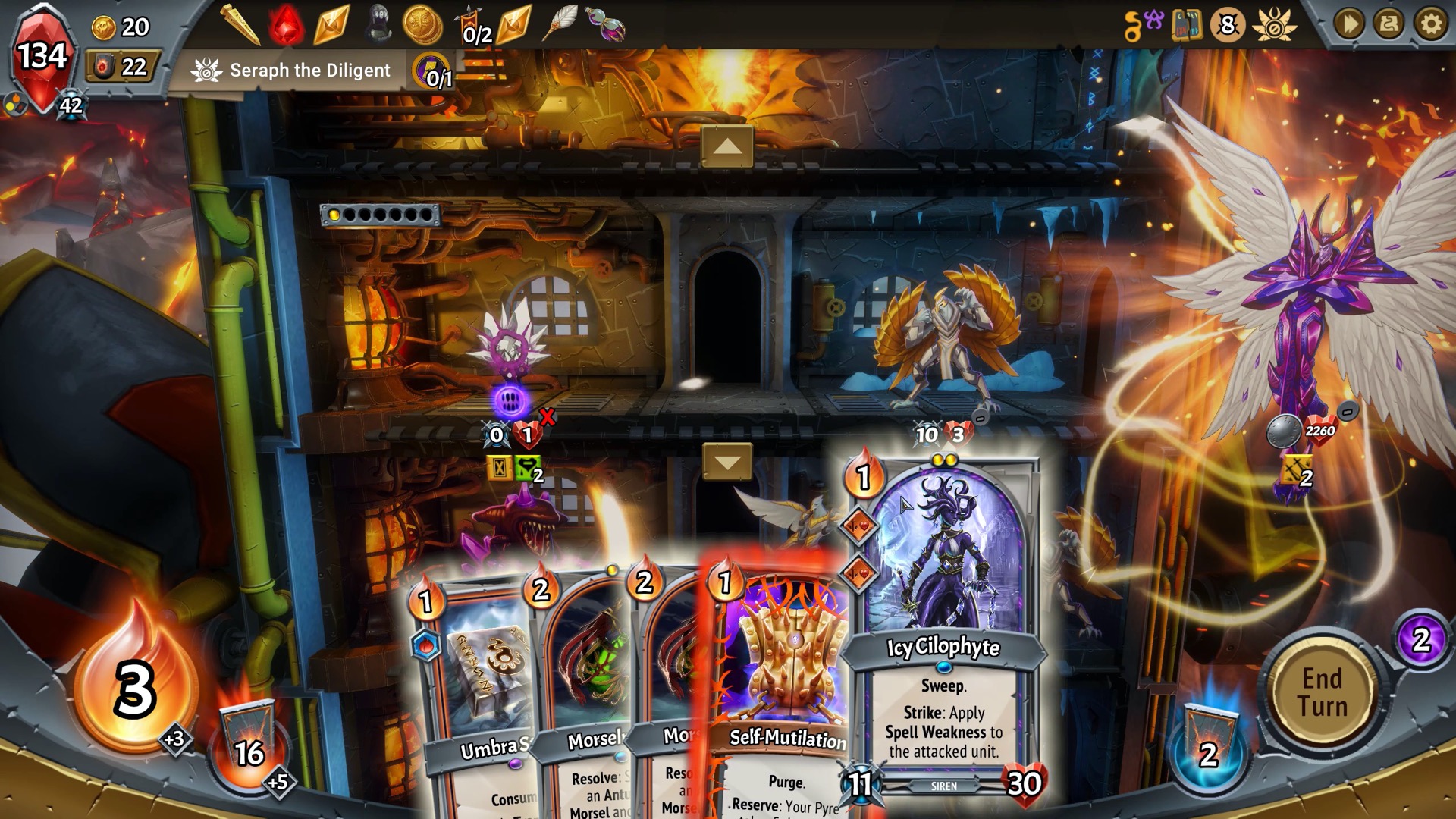 “We really want to encourage you to fly this plane at the same time you’re building it, putting new pieces into it even if that wing isn’t perfect,” says Krausnick. “The point of keeping upgrades is that it was a good upgrade for the time. Maybe now in the run you have to live with it, or you can try to get the most out of it, but your strategy has shifted in a new direction.”

Monster Train’s shop design also plays a role in keeping upgrades interesting, since it’s tuned to making your choices pared down so they’re pushed to the fore. Unlike in Slay the Spire, shops never sell cards, so you just get five options: three upgrades, pay to remove a card, or pay to reroll the upgrades on offer.

That last option only slotted into the game at the last minute, between public beta and launch, and Cooke and Krausnick are proud of it, since it gives you the chance to take a bet on getting a better set of upgrades, further tightening your thinking around your investments.

“It makes some good streaming moments,” says Cooke. “I remember wanting a specific upgrade and if it hit the reroll button am I gonna get it? When you do, it feels like getting three 7s on a slot machine.”

So what upgrades would you want? Emberstone is very common and reduces a card’s cost to play. It’s great. But rarer upgrades can be extremely powerful: Frenzystone adds an extra attack. Speedstone lets your unit attack first each turn. Holdover places a played card on top of your draw pile so you can play it again next turn. 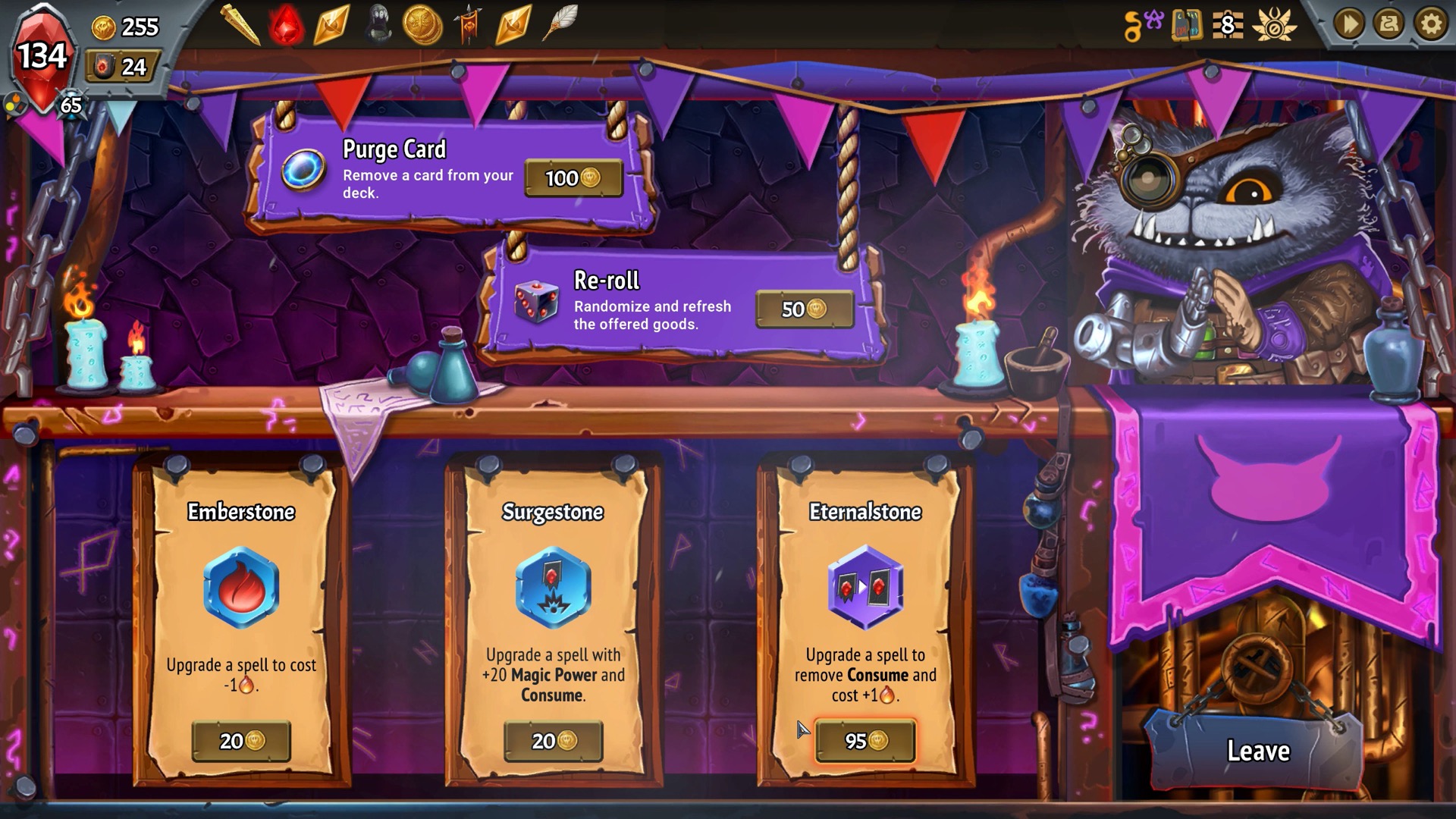 Some cards offer a forfeit, like Largestone and Major Refraction, which greatly raise a unit’s health and attack but also raise its size, so fewer other units can occupy the same floor. Forfeits also exist on cheaper upgrades: Surgestone gives spells +20 magic and also Consume, which means your spell can now only be played once during a battle.

However, the value of any upgrade can radically shift between runs, since Monster Train’s cards, unit designs, upgrades, Artifacts (its equivalent of Slay the Spire’s Relics) all tend to overlap each other. You can often mitigate forfeits: give your +20 Magic/Consume card a second upgrade which removes the Consume. Or maybe you have an ability that brings consumed cards back into play, or maybe you want to Consume cards because they have the effect of dealing damage every time?

“Or, a more nuanced way of using that one is to upgrade Torch, which is a relatively crappy starter damage card,” suggests Cooke. “It gives it more damage, and you often don’t want to draw it in the late game, so it having Consume is actually good. It performed its function and now it’s out of my hand and I can draw my better cards. It’s an interesting one.”

“Yeah, that’s the overlapping systems,” says Krausnick. “We’re always thinking about what we can do that loosely connects different things that can make a decision different, because you have a certain Artifact or another card in your deck. After some mental calculus you might realise it makes the upgrade better.” 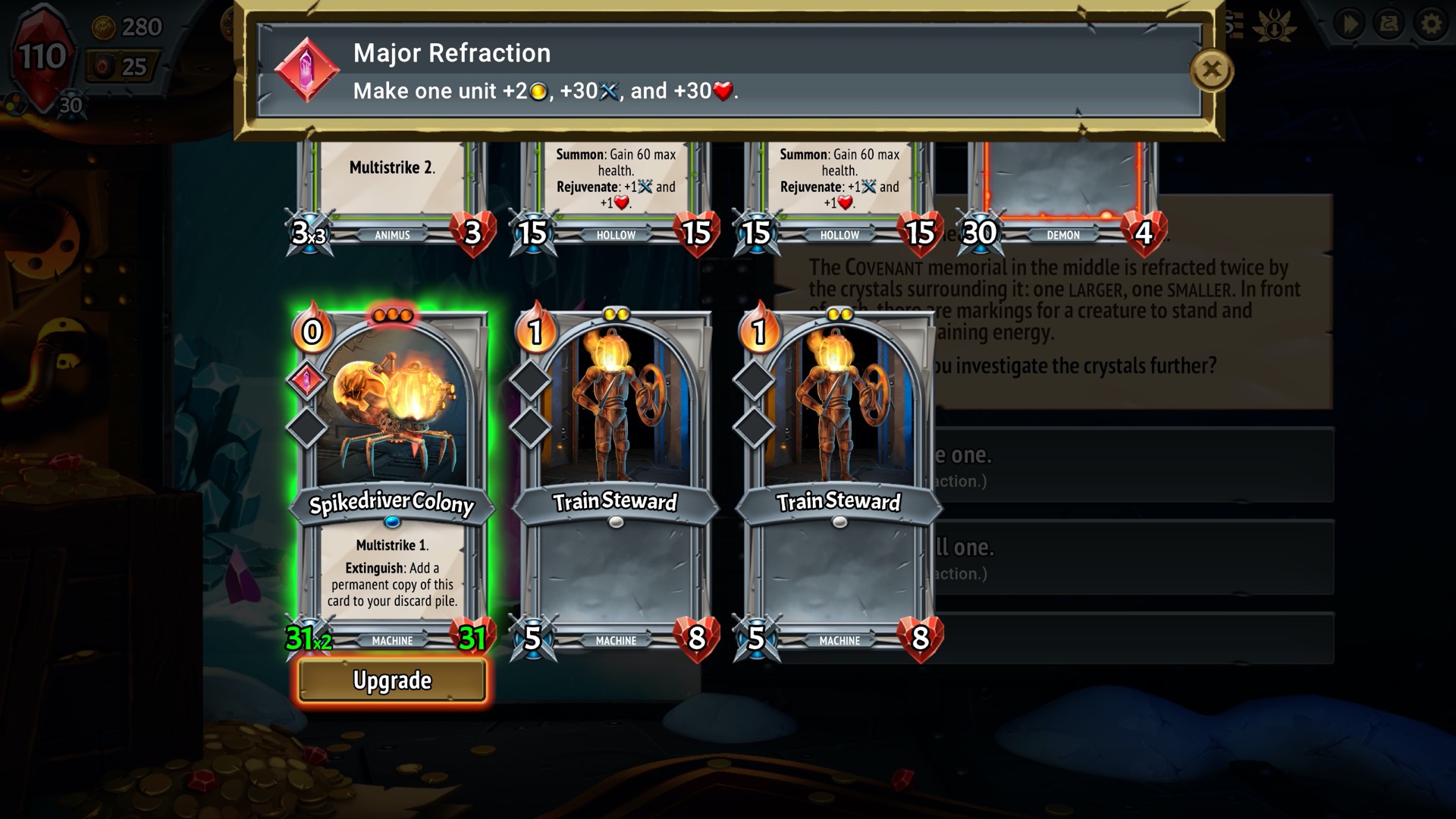 And then there are upgrades that exist completely outside the standard system. You might come across a weak zero-cost unit called Spikedriver Colony, which deals 1 damage twice per attack. When it’s killed it adds a copy of itself to your deck, so now you have two of them. The thing with Spikedriver Colony is that, along with its upgrades, it also copies whatever stats it had at the time of its death. So, if you’d buffed it during the battle, now it’s doing three times 80 damage and has 40 health and you let it be killed, now you have a monster Spikedriver Colony in your deck. You’ve just got to carry it through the battle, while also beating back the angels…

And that’s how Monster Train manages to strike balance within all this excess. The interplays between units and spells and upgrades and Artifacts can benefit and also impede you as you try to thread the needle of turning out strong enough to face each battle’s boss. You need to stop enemies from getting through your train and damaging your core, keep your units alive, give them enough attack damage, ensure your key cards are available when you need them, guarantee you have energy to play them.

“If you don’t focus on one of those things, you can’t take on the full range of trials and it’s going to probably end your run,” says Krausnick. “The overall core challenge of the game is balancing all these pieces, so even if we made something very strong in one vector, it’s fine.” 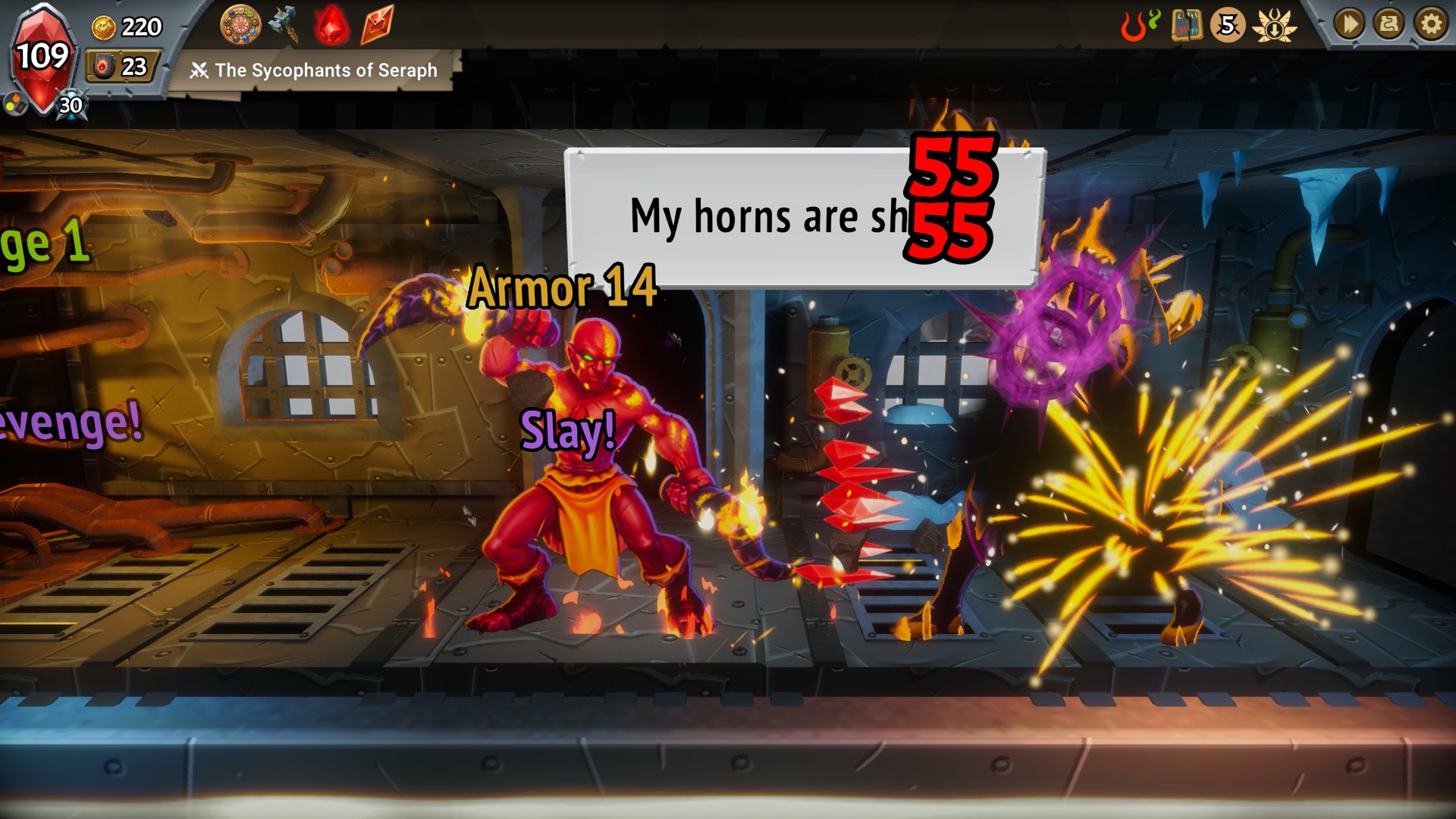 So there’s an Artifact that raises the limit on upgrades to three, and certain places where upgrades are added even if you have no space. You’ll frequently feel all-powerful, watching your units’ exploding as a result of all the decisions you’ve taken over managing your deck and playing your cards.

“You can’t necessarily design or plan these moments, but as a developer you can make yourself open to them, and when they show up you can embrace them,” says Krausnick. “Some games are definitely afraid of them because they could throw the balance off or be a little too weird. But if we spot something like that, we try to preserve it, keep that moment for people to find.”