Pack your bags, reader, we're sending you to live a simpler life in one the many farm games Humble are offering in their new Sweet Farm bundle. Okay, so not all of the games involved in the bundle strictly revolve around farms, but the best one does and it completely works with that "simpler life" thing because that's exactly what the game is about.

That's right, it's Stardew Valley! As well as six other vaguely farm/garden/animal-related games that you can get for just $10 (about £7.69).

To start with the cheapest bundle, you can get your hands on animal-breeding survival strategy sim Niche, platformer MagiCat, and puzzler Evergarden all for a meagre $1 (about 76p). Pip quite liked Niche, which has a great little origin story to go with it:

"It all started five years ago, when our game designer Philomena couldn't decide whether she wanted to study biology or game design. Game design won, but it was a close call! Even though she had a lot of fun with the systems that game mechanics have to offer, it was impossible to let go of the wonders of biology, especially evolution and zoology. As a result, Philomena decided to create a game about population genetics as her final thesis. The first prototype of Niche was born. Niche – a genetic survival game is now published and developed by Stray Fawn Studio, founded in 2016 by Philomena Schwab and Micha Stettler." 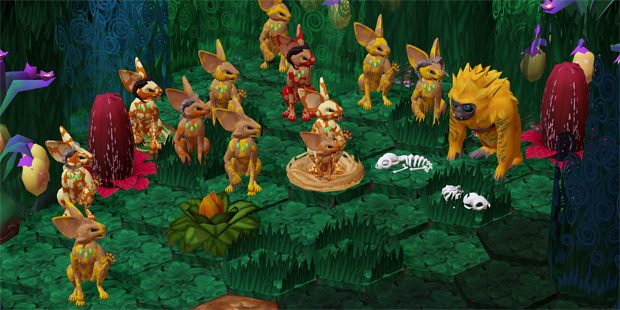 To get the next tier too, you need to pay more than the average price so far - currently a not-so-whopping $7.35 (about £5.65). That rewards you with ecosystem-growing game Equilinox, multiplayer party platformer Ultimate Chicken Horse, and adventure game Samorost 3. Our former John (RPS in peace) was a fan of Samorost 3, and was particularly enamoured with its audio:

"I cannot think of a game whose soundtrack comes close to this, and few that are so pretty. Gnome's yelps of delight, or enthusiastic dances, or the way he sometimes says, 'Hop!' when he jumps, are idiotically adorable. It's so alive, so intricate, and so graceful."

And last, but certainly not least, if you pay $10 (about £7.69) you'll get all of the above as well as Stardew Valley (and also the Niche and MagiCat soundtracks as a bonus).

This price is only just a little bit more than Stardew's lowest sale price alone, and it's a great time to jump into the game, too. Towards the end of last year, update 1.4 finally arrived with it a whole host of quality of life changes and new content, as well as something called the Trash Bear (who I still haven't found in-game, but I eagerly await his arrival).

Stardew Valley really is brilliant, and that price is absolutely criminal for just how good it is. The fact that it comes with a bunch of other games is just the icing on the cake. But don't take my word for it, have a gander at Steven Messner's Stardew Valley review instead: "Stardew Valley is the rare kind of imitation that breaks free of the boundaries of its inspiration, becoming more than just a clone but an experience that thrives independent of its origins."

If you're curious where your money is going, the Sweet Farm charity is a non-profit sanctuary addressing the impacts of factory farming across animals, plants, and the planet.

The Humble Sweet Farm Bundle is available right now until February 4th, and prices start at just $1 (about 76p).