If you click on a link and make a purchase we may receive a small commission. Read our editorial policy.
Ghostrunner review
A ninja who spends more time running on the walls than the floors climbs a dystopian skyscraper while his personal death count spirals into the thousands.

Elite cyber ninja? I died 1423 times in Ghostrunner. Over a seven hour campaign that roughly works out at three deaths a minute. That’s the kind of toll even today’s shower of political leaders would struggle to shrug off. A body count so vast I wonder if I ever actually understood Ghostrunner or simply fluked through. In the same way that I passed my driving test after nine failures: instead of enjoying my right to drive, I remember the nine out of ten people who think I’m a danger to the public. In both cases I feel glum despite the victory.

Ghostrunner’s powers are designed to make you feel cool, but they’re presided over by the angry conductor from Whiplash who throws chairs if you don’t play to his tempo. You can wall-run, grapple hook and knee slide down ramps to turn yourself into a canyon-leaping bullet; all the good stuff that makes Titanfall such a wheeze. But, in platforming segments at least, this isn’t a toolbox to dance around the world, but rather instructions in Simon Says. You learn by rote to survive gnashing Super Meat Boy gauntlets made 3D.

I’ve never wholly understood the appeal of challenges you best with repetition and muscle memory. It doesn’t feel like the accruing of skill, but rather a tightening of the blinkers until there’s nothing left but the optimal route. I know the art of this is having such command of a character that you can repeat the performance - and no doubt an amazing speedrunning community will grow from that - but smashing face first into rotor blades and electrified walls again and again to get to that place slightly undermines the cyber ninja power fantasy.

Thankfully, there’s more wiggle room in combat arenas. In these knottier spaces you use that playful mobility to chop up enemies in an order of your choosing, the exit opening when the final neck is severed in a grisly burst of slow-mo. But the one hit kills and proliferation of ranged attackers mean you often die without knowing why. Yes, you have a powerful slow-mo dodge to sidestep bullets mid air, but it’s the bullets you don’t see that get you. Again, it encourages tentative play when you’ve got a body stuffed full of brash toys. 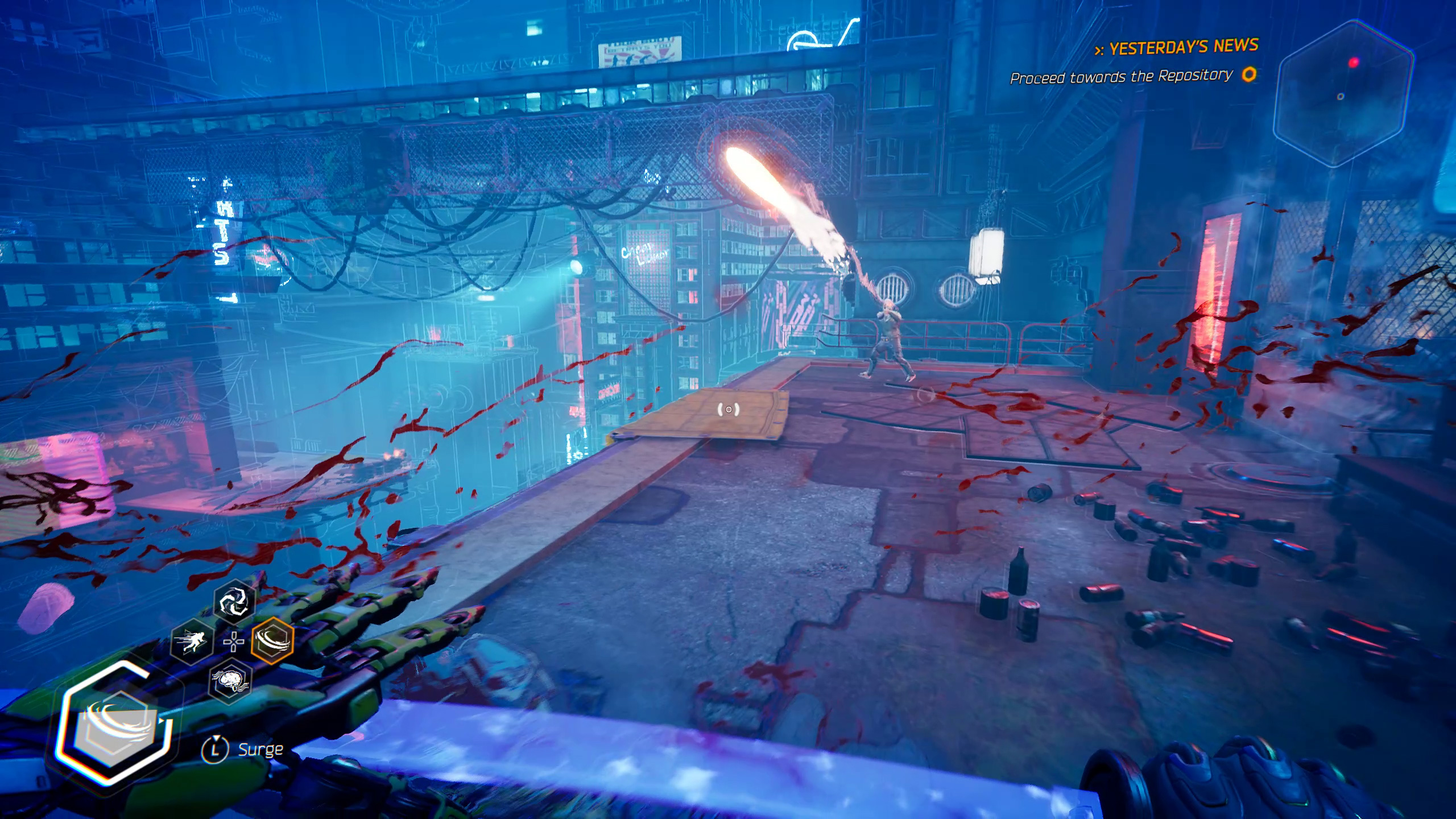 At least deaths are quick and painless. One hit and our cyber warrior is spat back out at a generously placed checkpoint. The odd moment the game fluffs this - spawning you behind a couple of tedious rail grinds before getting back to the fight, say - reminds you how easy it is to get this stuff wrong. Here, the flip book of game over screens is more like the montage of Tom Cruise repeatedly splatting in Edge of Tomorrow. It’s all so breezy I was often surprised at how high the level’s death count was.

And for all I grimace at the linear platforming stretches, I prefer combat when it borrows some of that focus and becomes a more puzzle-like affair. Having to slice shield batteries before you touch their connected soldiers lends real direction to those fights, as you dart around invulnerable platoons before turning the tables. Or the appearance of slow-mo or shuriken pick-ups that, again, flip the difficulty on its head if you find a safe route to them. Compared to throwing a glass ninja at a firing squad, this is far more rewarding. 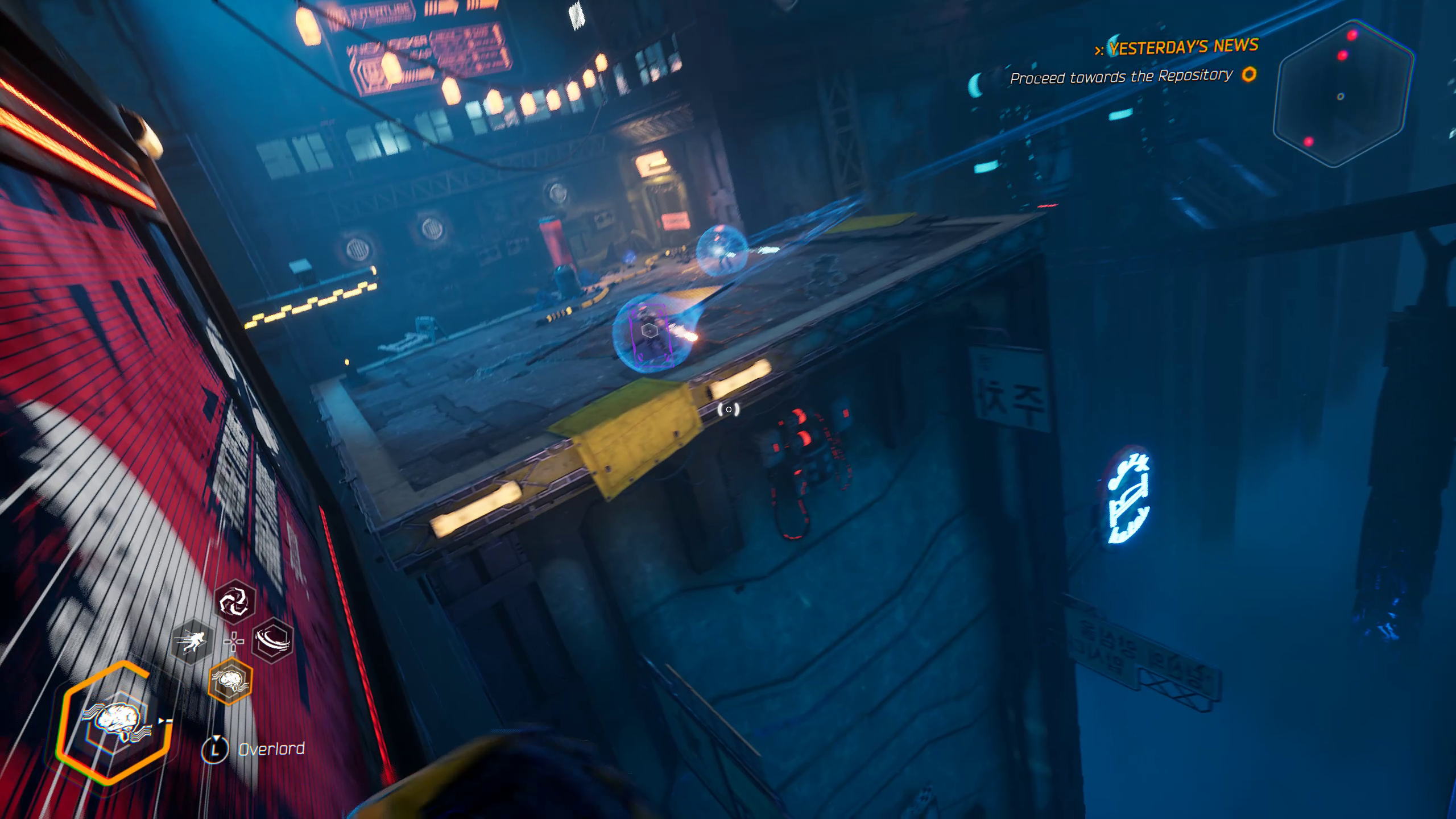 And as more enemy types are introduced, each with a specific weakness or strategy, this ‘sequence puzzle’ element becomes more prevalent and Ghostrunner better with it. After a few hours there are big jumpy boys you need to side step and ninjas to parry before dissecting. And I adore skidding under the laser fire of ED-209 lookalikes before perforating their guts. All of them behave less randomly than a mad gunman, and encounters built from these building blocks are the game’s best.

Regular new arrivals speak to Ghostrunner’s main strength: it’s a brisk campaign that rarely repeats itself (bar the hundreds of bits you repeat through cack handedness). I’ve heard the designers cite Titanfall 2 as an inspiration and this is a similar six or so hours where every level adds a mechanical twist for ten minutes before parkouring to the next. You’re hacking billboard to orient paths. No, you’re surfing drones between rooftops. Actually, you’re dodging low hanging signs atop a train. It’s never dull. 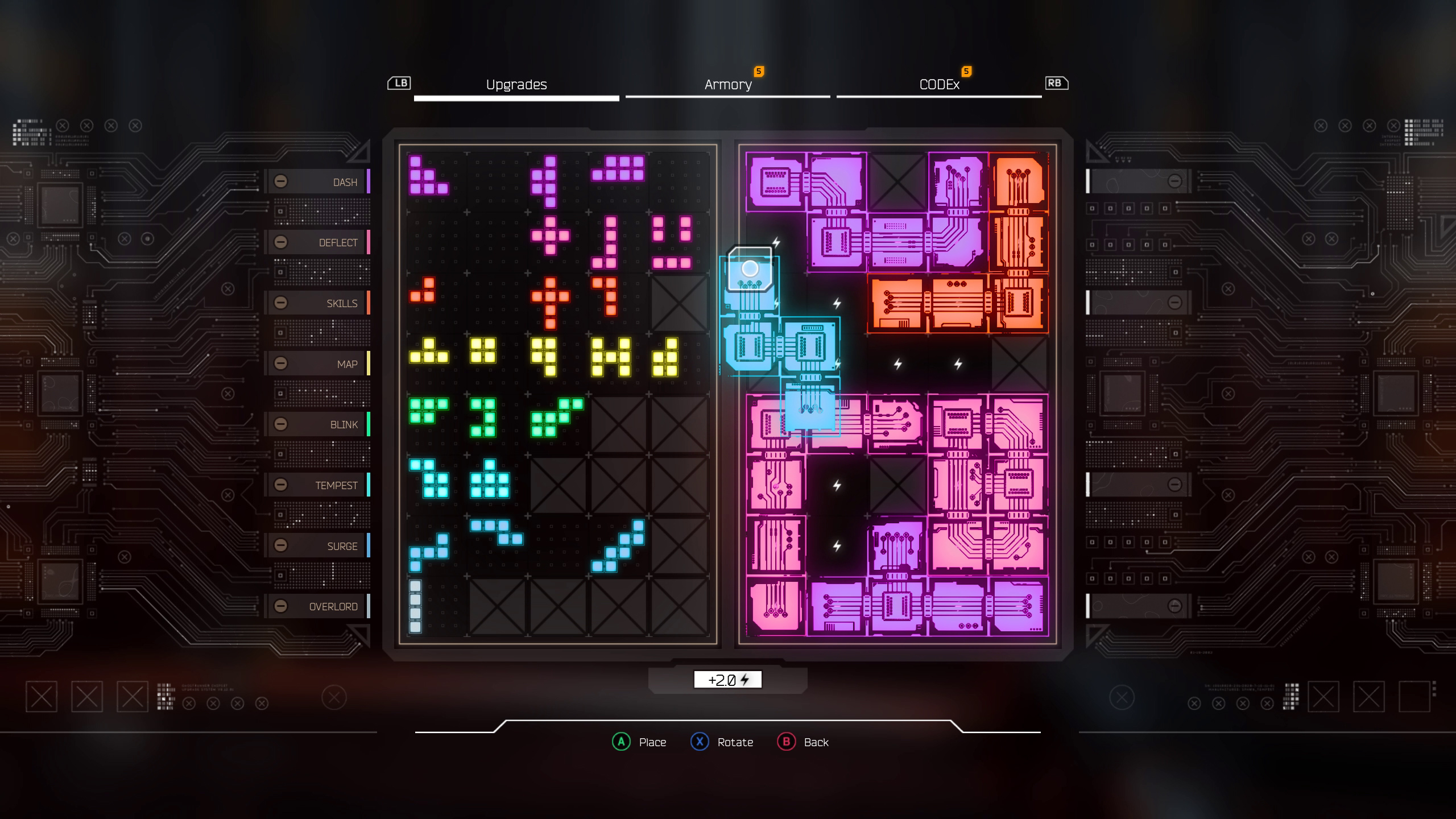 Given its brevity there’s a surprisingly meaty upgrade system. You plug in implants like you manage a Resident Evil inventory, fitting tetromino powers into your brain grid. A drip feed of abilities sees combat options blossom over the campaign, from teleporting sword strikes to brainwashing your enemies, and further mods can radically alter their behaviour. Or just remove the edge off a difficulty spike, if you feel like hanging back, plugging in an ability recharging mod and waiting to unleash projectiles from a safe distance. Not how it’s meant to be played I imagine, but handy for more disheartening brick walls.

I love how you can endlessly recalibrate and that builds are born from how weird bits slot together. The decision to sacrifice a lot of space for a juicy power - deflecting projectiles back to sender, for example - will probably speak to the nervous beginner, while your speedrunners may jam together lots of niche tweaks to turn warp cut into more of a navigation tool, or eking out energy to perform abilities at more helpful intervals. That unlocks apply in replays of earlier levels is a masterstroke: a second trip through the game, with your fully charged warrior, is transformative enough to make even Mr 1423 Deaths here consider a run at the best time/fewest death leaderboards. 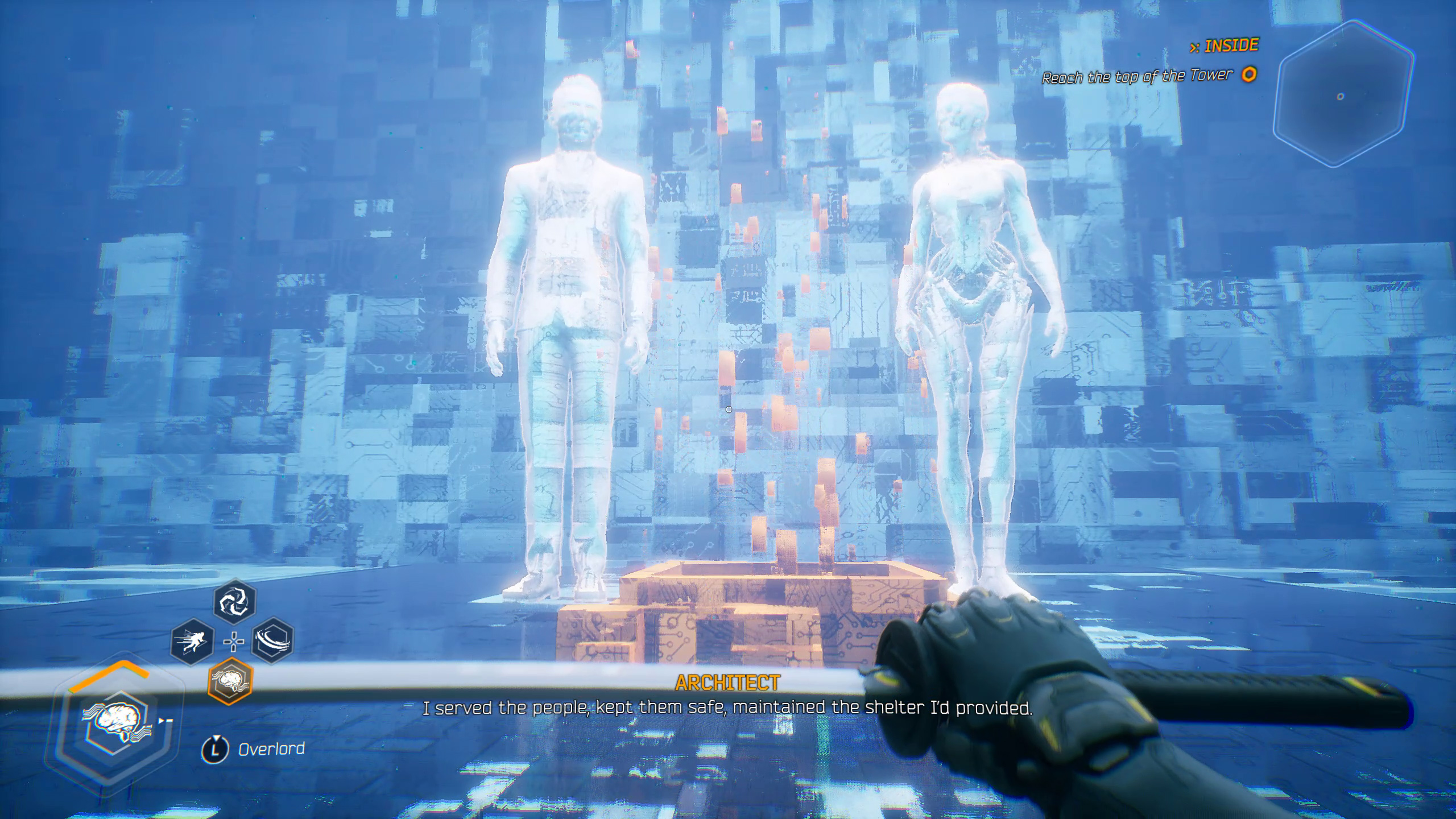 As a simple one-and-done campaign run Ghostrunner isn’t at its best: the handiest tricks coming too late in the day and the towering death spikes overshadowing the good times around them. I couldn’t, for example, tell you anything of the story, as it’s delivered over comms during moments of intense concentration. I think it involves someone called Mara, but only because that’s the name on one of the boss fight health bars.

But take that initial pass as a warm up lap, inuring yourself to some frustrations to come, and what follows finally delivers on the fun of the cyber ninja fantasy. Death number 1424 beckons.