It's my second day back after the break, and it turns out a magical forest adventure was exactly what I needed to dispel some of those post-holiday blues. Forest Egg is a brief, free little atmospheric game by Marek Kapolka, and it's both an homage to and an extension of the 'Egglike'. This page has a crash course in what that means, but the gist is that they're "ironically shitty" games characterised by the use of pre-existing, flat image assets.

Forest Egg throws out the irony, takes that shittiness and turns it into loveliness.

I picked up a pair of 7.1 surround sound headphones to give me an edge in Overwatch and Plunkbat, but it turns out they're also great for wandering around a forest and immersing myself in the chirping of birds and the croaking of frogs. Those help with the atmosphere, but the stars of Forest Egg's show are Marek's collection of images from his tumblr that are dotted around the landscape.

They're a playful mix of paintings and photos. A canvas of scantily clad ladies stands over a field of photographed mushrooms, while a real-life snap of a lake sits on a nearby easel. It's a striking effect. Seeing a shoal of beached, 2D fish next to that lake somehow made me feel more sorry for them than I reckon I would have done had I been looking at the same scene rendered naturalistically. 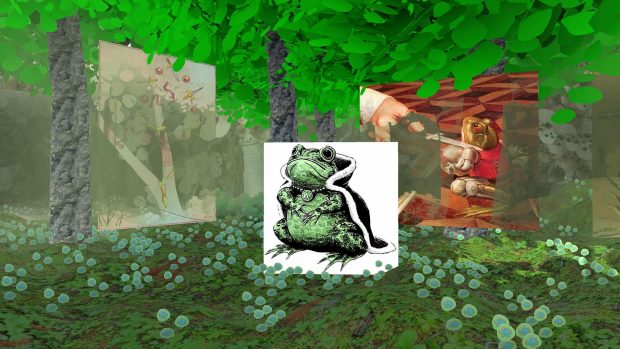 My favourite place might be what I'll dub 'The Copse of Majestic Frogs', as pictured above, though you do have to be careful not to fall off the edge of the map. There are no barriers, only floating skulls whose warning I failed to interpret before it was too late. Falling through the scenery did mean I spotted a secret area though, which I'll leave you to figure out how to access for yourself.

As with Adam's post from yesterday about another of Marek Kapolka's games, I found Forest Egg through Sergio Cornaga's splendid curation of experimental games from 2017.