Perhaps I did not appreciate The Witcher 3 enough at launch. I have a personal reason: I was on deadline to churn out an interview for a 100 hour game and I had less than 48 hours in which to do it. It's as if games journalism has some broken cogs? I dunno, spitballin' here. But I keep dipping back into the game, finding new reasons to love it, and finding a new level of appreciation for just how many games live within this one shell. I'm simply never had time for Gwent, so I've been waiting for the game to launch proper to give it my full attention.

I've got to wait a bit longer for Gwent to leave beta, but based on yesterday's announcement it seems like CD Projekt Red knows that the wait will be worth it.

The team announced their plans via a statement to the community, defining Gwent Homecoming as a period of revamping the entire game before full release. “The redesign will leave no stone unturned,” said CD Projekt Red. “It’s still something that requires extensive testing, but we’re that serious about making things work.”

From the community memo:

"We want GWENT to kick some serious ass and reignite your passion for our beloved CCG. We would like to ask you for your trust and patience. We need 6 months of fully-focused development to deliver what we’ve planned. Aside from standard season transitions and events like Faction Challenges or Warped Arena rulesets, we will release only two updates during this time. One in April — it will introduce the missing Premium Cards as well as faction specific board skins — and one in May, which will balance out the game (Wardancer included) with a new approach to “Create”. Six months is a long time, however, on the flip side, after Homecoming concludes, we will go out of beta and release Thronebreaker at the same time. Don’t worry about your progress, once Homecoming is complete, for a limited time, you will have the ability to mill all of your cards for their full value. Regarding our esports activities, for now, our calendar is not changing."

The single-player story campaign for Gwent, Thronebreaker, has had its campaign scope expanded, while The Witcher 3 writing team works their magic. Here's the teaser trailer from last year, promising the game would be out, you know, last year. Also, try to not sing Thronebreaker to the tune of the Bond "Moonraker" theme. That's what I'm doing now with my brain and mouth.

And here's the summy image released with the community memo, detailing what's to be addressed in the next few months. 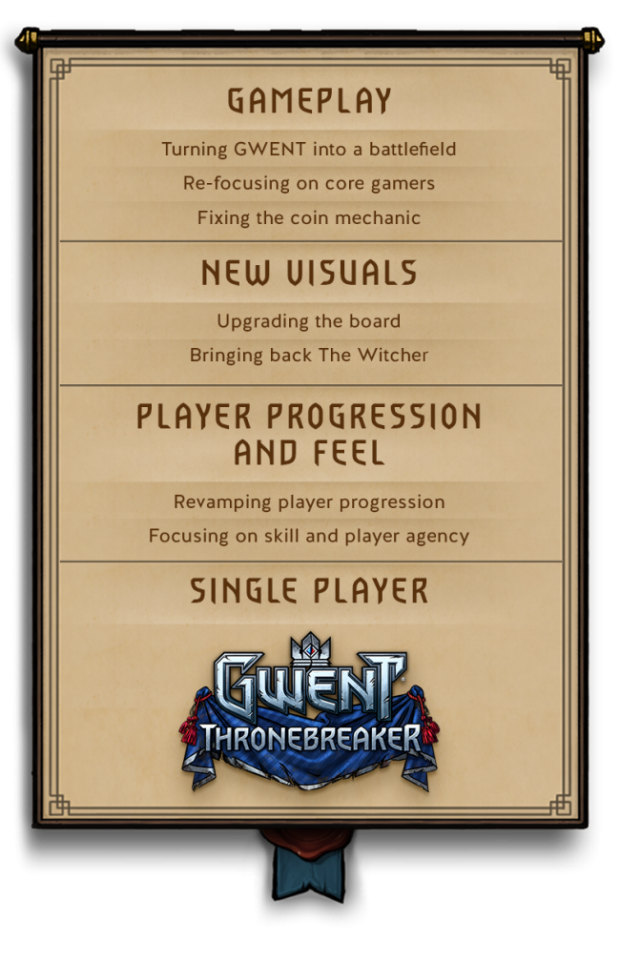 Consider reading Brendan's post on how to be a bit of an ass in the game in a very fun way.