What is the best weapon in Hades? The six weapons of Hades are your primary means of battle through the ever-changing halls of the Underworld. There's an awful lot to learn about each one, with different movesets, upgrades, and aspects to unlock for each Infernal Arm throughout your journeys.

Our Hades weapons guide looks to furnish you with all the knowledge you need to wield these titan-slaying weapons, with in-depth tips and details on every facet of each one - and my personal opinion on the very best weapons in Hades.

How to unlock weapons in Hades

Weapons in Hades, known as Infernal Arms, are kept in the Courtyard - the final room of the House of Hades before you begin your next run. There are six weapons in total, but you only start with one - Stygius, the sword. To unlock the other weapons in Hades, you have to spend the Chthonic Keys you find throughout your runs. Each weapon requires a certain number of Keys to unlock:

Do note that the more expensive weapons aren't necessarily stronger than the cheaper weapons. With the right upgrades and Boons, you can grow to become ludicrously powerful with any of the six Infernal Arms available to you. For more information on all the best Boons to use in conjunction with these Infernal Arms, check out our Hades boons guide.

Now let's talk about my thoughts on the best weapons in Hades. Which is a strange idea, because the weapon is nothing without the Boons, Aspects, and Daedalus Upgrades that go with it. But having said that, there are a couple of weapons which I find give you a better chance of creating a game-winning build, and an easier ride through the Underworld in general.

Personally, I consider Coronacht to be the best weapon in Hades. Mastery of this powerful bow relies on good timing, because you'll need to get used to its power-shot with and without dash-striking (more on this shortly), but once you've got that down, this weapon allows you to deal massive and consistent damage from a safe distance, which will help an awful lot in the later realms (particularly Styx) when you're almost guaranteed to take damage getting into melee range with certain enemies.

A close second is Aegis the Shield, whose block can be a literal life-saver when you've no other way to avoid taking damage. It also boasts probably the highest utility of any Hades weapon, with a punishing attack, a ranged throw for smaller enemies, and a charge attack for quickly closing or increasing the gap between you and the enemy.

My third favourite weapon is Stygius - the old reliable sword which deals excellent, reliable damage whether you choose to focus on the regular attack combo or the area-of-effect special attack. It doesn't quite offer the same safety as the above two weapons, but Stygius matches them both for sheer damage potential, and it's a hell of a lot of fun to use (as you can see from my playthrough video above!).

But any of the six weapons can grow to become astonishingly powerful with the right combination of upgrades. And aside from Boons, these upgrades come in two forms: Aspects, and Daedalus Hammer upgrades.

Each Infernal Arm has access to four forms, known as Aspects, which you can switch between at the start of each run. But, like the weapons themselves, these Aspects must be unlocked by spending Titan Blood - a rare resource you obtain only by completing boss battles during your runs.

Each Aspect offers a specific bonus to one area of the weapon's moveset (possibly even changing the moveset altogether). Once unlocked, each Aspect can also be upgraded to a maximum level of 5 with subsequent spending of Titan Blood. Full details on each weapon's Aspects are below. 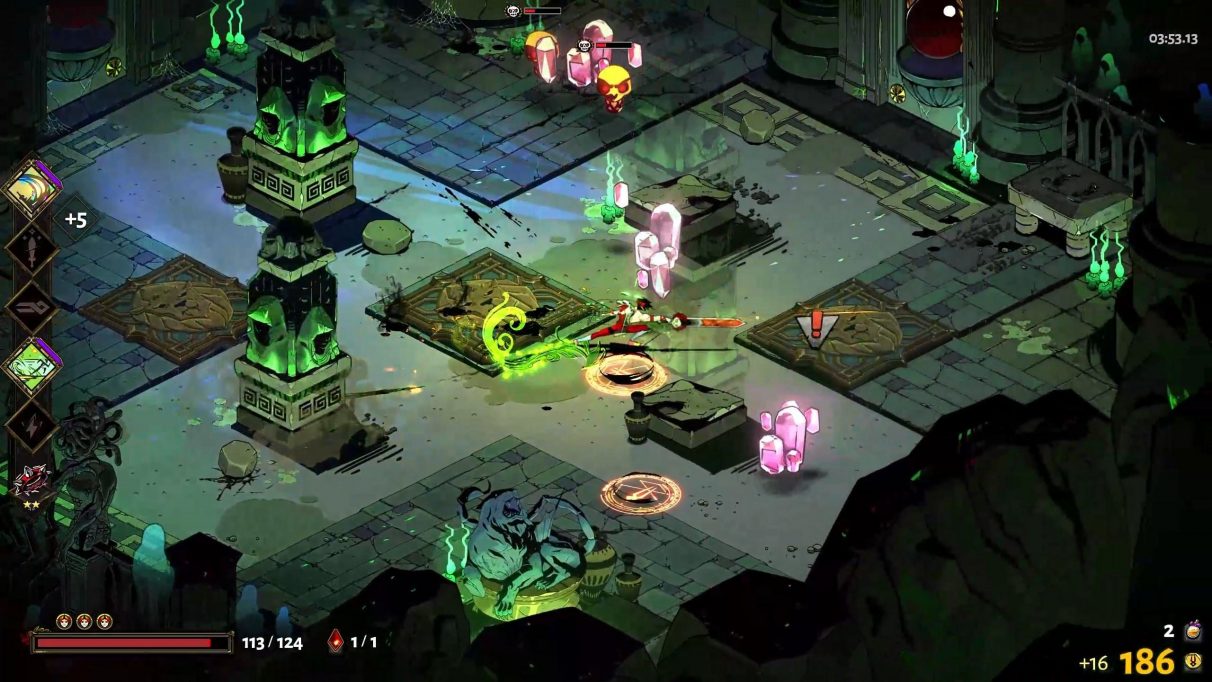 So let's now go over each of the six Infernal Arms in Hades, with a description of their moveset and tips for success, along with a full list of each weapon's Aspects and Daedalus upgrades.

Stygius is built for balance between strength and speed (which is why it makes for a good starting weapon). Its three attacks are easy to learn: there's a three-step combo which ends in a knockback thrust; a dash-strike which skips straight to the knockback thrust; and a special, which deals heavy knockback damage in a large area around Zagreus, but takes a moment's preparation and recovery. Also, if you dash before the Special detonates, the AoE effect will follow you, giving you what is in essence a super-charged dash-strike.

Coronacht is probably the weapon I've had most success with in Hades. Once you get used to dash-striking and releasing your arrow at the right moment for a power-shot, you'll quickly realise just how insanely strong this bow can be. Once you unlock the Aspect of Chiron, which guides your arrow spray special to hit the targeted enemy, your damage potential will increase even further. I would say that Coronacht with the Aspect of Chiron is possibly the strongest weapon in the entire game, thanks simply to its ludicrous DPS and high fire rate (which pairs nicely with the Boons of Artemis!).

Aegis, despite being a shield, fits well with a very aggressive playstyle. Its utility is its greatest strength: as well as the powerful single attacks you can unleash, you can hold Attack to block attacks in a certain direction, before letting go to charge forwards in a Bull Rush. And finally, your Shield can be thrown with your special attack, ricocheting between enemies before returning to you. 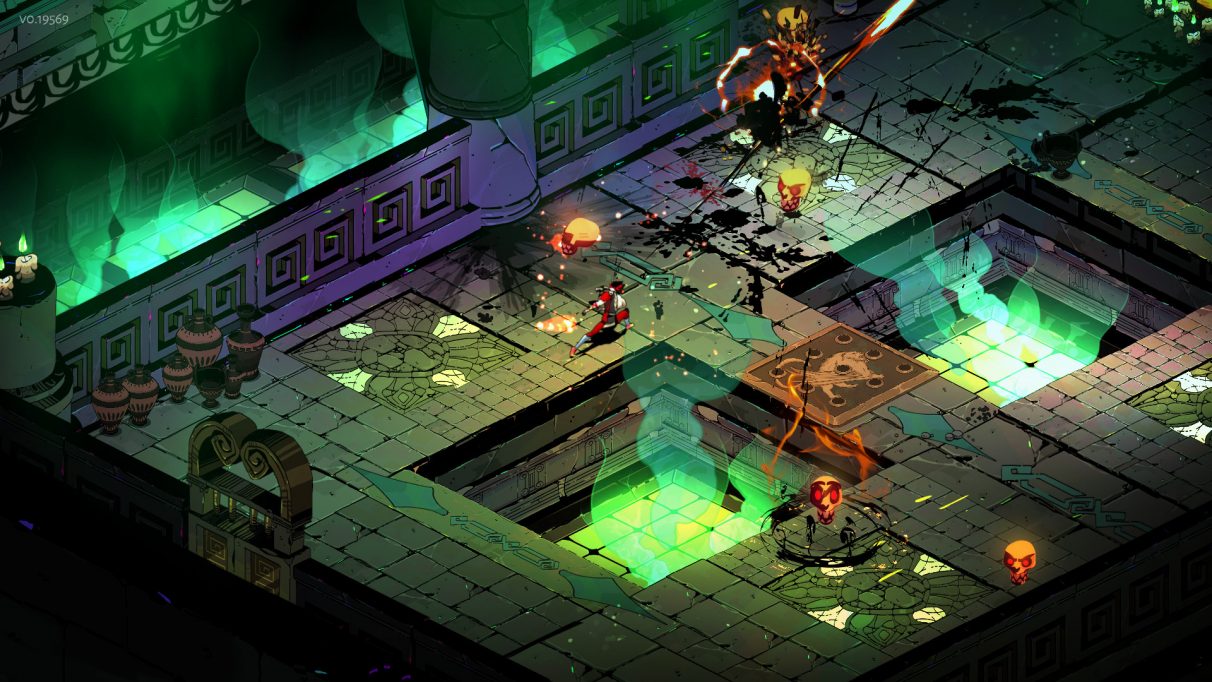 Varatha's charge-up Spin Attack is what you should construct your build around in every Varatha run. Hold attack to charge it up, then release to deal massive damage in a large area around you. You can also dash instead of releasing, and you'll dash forward to unleash the Spin Attack. Aside from this, you have a fairly normal and underwhelming attack and throw special, both of which can be upgraded to become powerful but neither of which are particularly impressive until then.

Malphon boasts the highest attack rate of any melee weapon, which increases its potential when upgraded. Your main attack is a fast five-hit combo, and your Special is a high-damage uppercut. You can turn either your regular attack or your special into a Dash-Strike which deals bonus damage. The only downside to Malphon is that you have to get up close and personal with even the most dangerous of adversaries.

Exagryph is probably the hardest weapon in Hades to master, but its potential is unlimited, whether you choose to focus on its regular high-fire-rate attack or its powerful special, which fires a slow-moving Bombard into the air to land and deal high damage in an area. You'll have to become well-versed in manually reloading your weapon at the right moment, but after that - and with some good upgrades - not much can withstand Exagryph.

That wraps up our Hades weapons guide. You should now have a pretty decent idea of the opportunities and powers available to you with each of the Infernal Arms. But that's not all we have to say on the topic of Supergiant's marvellous roguelite! Be sure to check out our Hades strategy guide for in-depth tips and links to all our other Hades guides.