I'm surrounded by three people, each trapped in a vertical cot. We're staring at each other from respective cages as we plunge into the depths of our prison, having been pressganged into resolving the warden's monster problem. It won't be long until we're at each others' side, tiptoing past sleeping abominations. It won't be much longer until we're screaming and scurrying away, after one of us wakes them up.

I'm playing co-operative survival horror game GTFO at a preview event in Copenhagen. The wholesome lights of the Christmas market I just walked through outside contrast with the virtual gloom and steel that now surrounds us, as well as the assault rifle I've chosen to deal with its denizens. Bullets are scarce, and supposed to be something of a last resort. We burn through a lot of ammo in the first room. 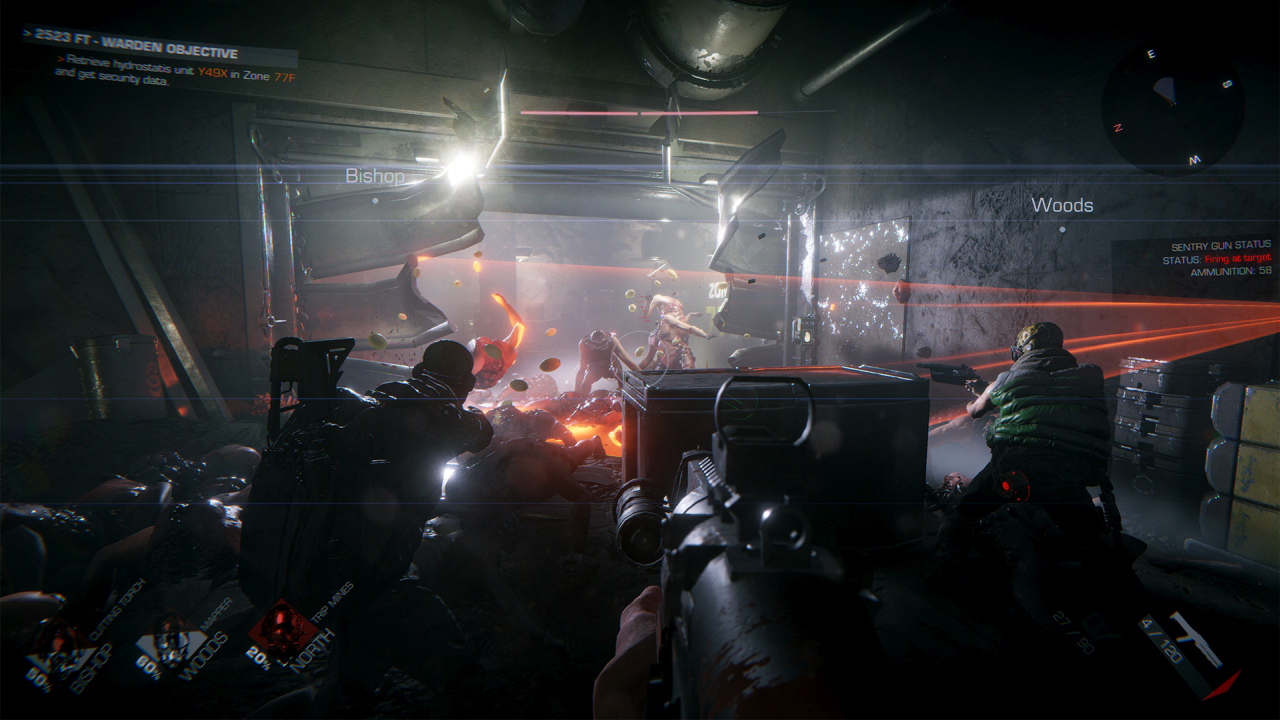 We start next to at least four monsters, milling around a short stroll away. They're congealed lumps of throbbing flesh, occasionally stretching out limbs in demonic yawns. Our guide, developer Svante Vinternatt, explains that they are sensitive to light, sound and movement. That means torches off, bodies crouched, footsteps slow. Every now and then the creatures swell up, their heartbeats squelching with a noise that sounds disturbingly like someone shaking a bottle of bodily fluid. If you move at all while this is happening, we learn, the monster will wake up. As will their friends.

Six dead monsters and a lot of panicked chuckling later, and we are ready to advance into the next room. One of us has brought a bio-scanner, which tells him the rough locations of nearby threats. We've each picked a different tool, giving us special roles and responsibilities. I'm the sentry gun guy, which soon comes in handy when I barrel straight into the monsters I was just warned about. The unexplored room erupts in screeching, and we back out. Svante seals up the door with his glue gun, hoping to buy us a few moments before they batter it down. Instead, the creatures start pouring in from another door, surprising Svante as much as the rest of us. Surprise is an integral part of fear, and it's hard to be frightened of what you understand. so it's neat to see Svante jump.

Another reasons it's good to see monsters flood in from somewhere unexpected is that GTFO's long-term appeal rests on reliably keeping you on your toes. Enemy spawns and objective locations are randomised, Svante tells me, so you'll take different routes through any levels you replay. Beyond that, there's the Rundown system. The plan is for new sets of levels to come out on a semi-regular basis, with greater challenges awaiting at deeper levels of the prison. 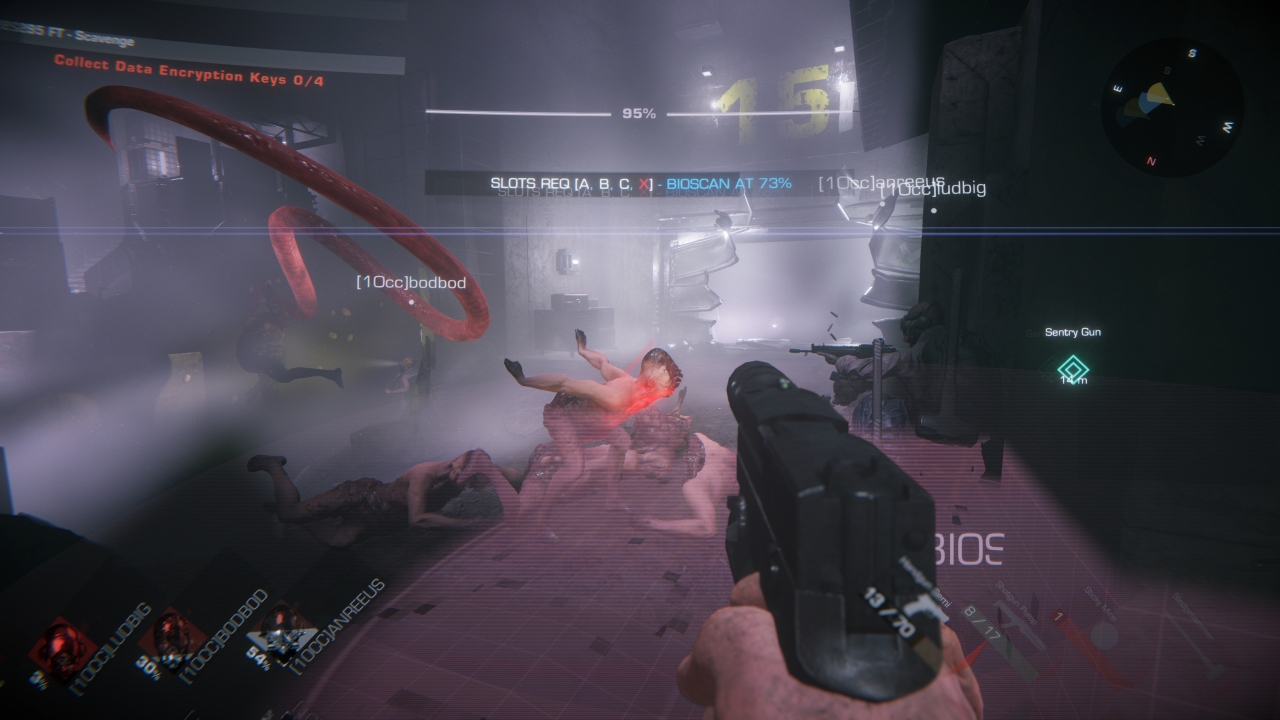 "You don't really know what's behind the next door", Svante says. "You know the objective, but not the layout, or what kind of challenges are there. Is it pitch black? Are there shadow enemies that you need flashlights to be able to see...?" Here, we are trying to track down a fellow inmate.

There are no shadow enemies in sight, sadly, but I do spot a menace with a head formed of seething, wafer-thin tendrils. It's a scout, and if one of those tendrils gets acquainted with our bodies it will summon yet more monsters. We could sneak up on it, but Svante deems that too risky. That's why he tells another player to lay down some mines, then decapitates the scout with his sniper rifle. The other horrors wake up, but we survive their onslaught. Just.

We're at a crossroads. Thanks to a terminal we hacked, we know which doors leads forwards - but we also know about the supplies behind a different door. Problem is, that door's alarmed. We'll need to pass a security check, splitting up to stand in holographic circles as they appear throughout the room. Naturally, this will bring more monsters. I very vocally declare that we can take them, then very sheepishly collapse to the floor when it turns out we cannot. 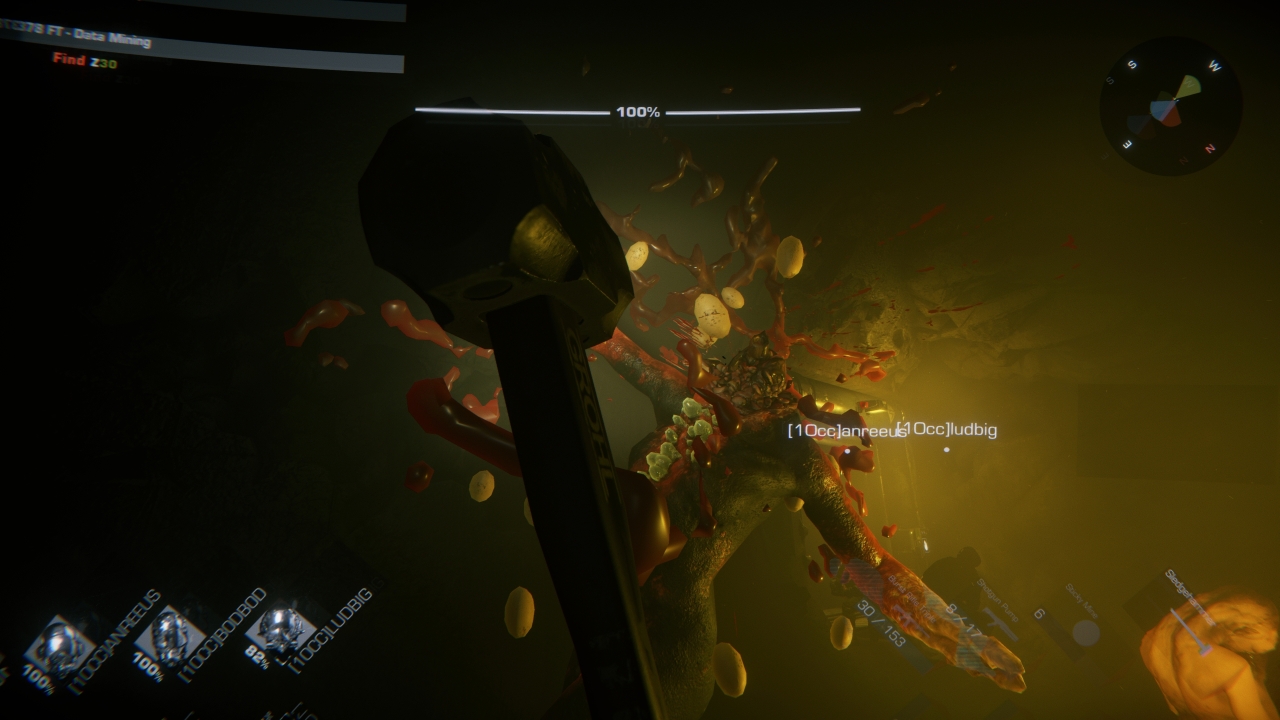 The knowledge in that terminal was our undoing, but they're still one of my favourite parts of GTFO. You need to type /commands, sometimes feeding each other information about specific keycards or other objectives. In our second mission we defended a reactor against waves of enemies, but had to take turns running back to whack in the next password. It's a shame that was the only time we had to deal with terminals while under pressure, though Svante says they do have plans to expand their uses. I can imagine desperately trying to hack open a door as the rest of the team fends off a horde, and Svante can too.

It's the kind of social panic I best remember from Killing Floor, a faster-paced, purely wave survival co-op shooter. One day, GTFO might hit the same highs - though its guns can't quite compare to Killing Floor's masterpieces. Its advantage, instead, lies in generating varied and interesting situations: stuffing hearts-into-mouths as you sneak past monsters, or figuring out routes and plans using those terminals. I'm a fan of any game where greed can get you killed.

I was hoping GTFO might go a step beyond that, mind. I wanted a taste of the kind of dread I get when I'm playing a single player horror game, but, perhaps inevitably, the presence of other people turns terror into laughter. There were a couple of times where we all carefully snuck behind separate monsters, then counted down to a glorious four-way melee takedown. Those moments were tense and satisfying, but laced with more humour than horror. I suspect actual, deep scares still require intimacy, and a suspension of disbelief that can never be attained when you've got another human nattering in your ears. 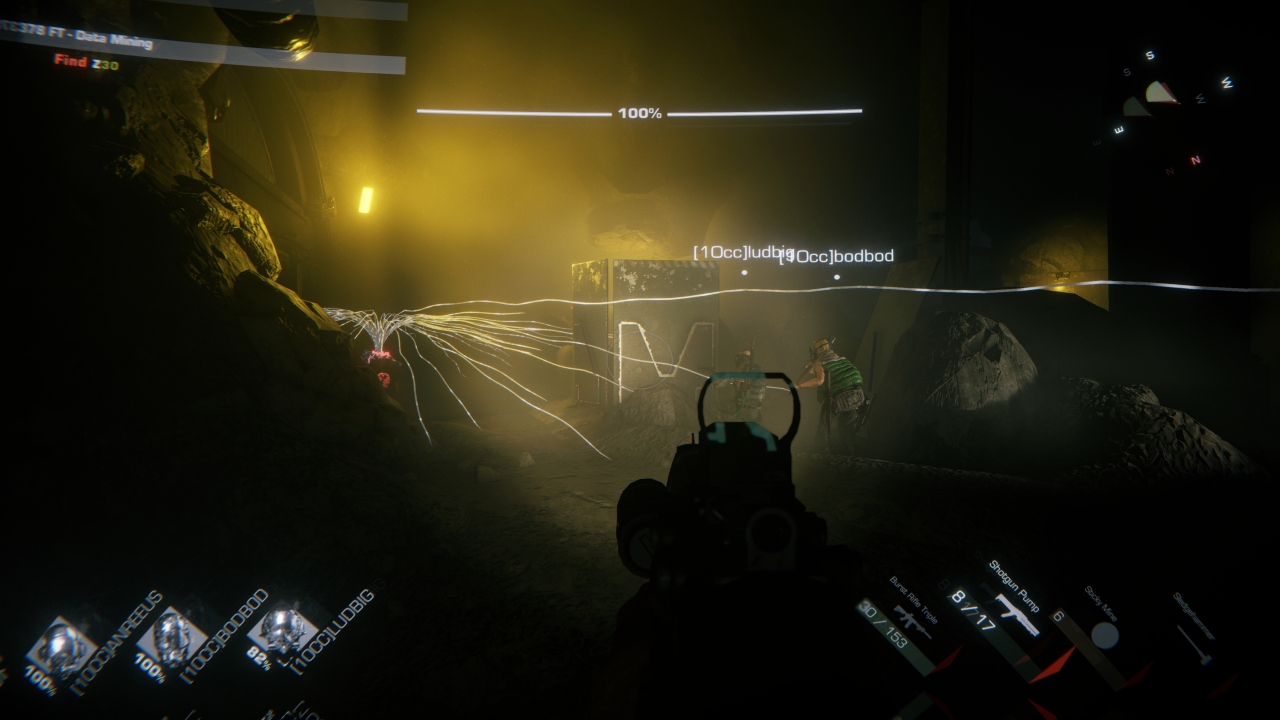 That said, 10 Collective Games still expect you to take their horrors seriously. "We're a small team trying to make something that's a little different", Svante says, "and really going for 'hardcore co-op gamers'. Of course there are situations where you can fool around, especially if you play with friends, that's part of it. But long-term, I think you might feel like this might not be the game for you. And that's totally fine, it's not a game for everyone."

I can see it. There's an emphasis on caution and co-ordination, which proved our downfall even on the tamer, early levels. One of Killing Floor's greatest strengths was how you'd only expect to win one time in four, sweetening victory by pushing you to the brink of defeat. I wound up enthusing about that over lunch, and was pleased to various devs' eyes light up in recognition. 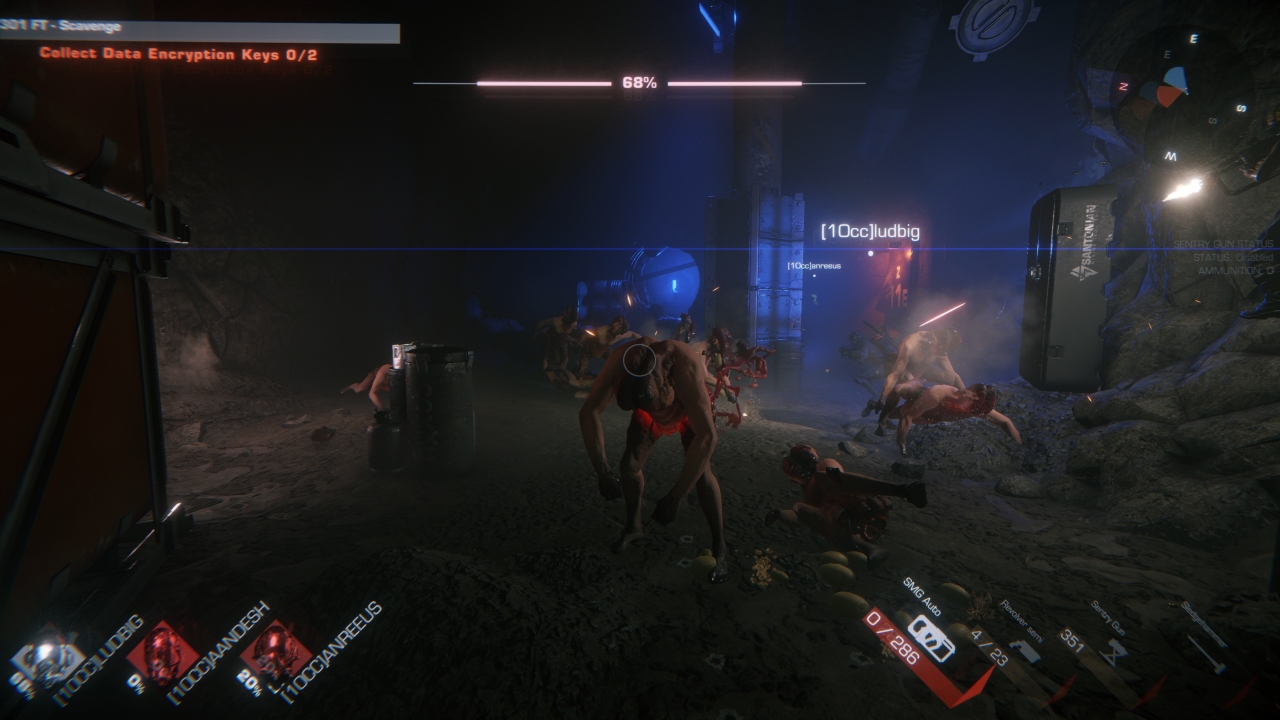 GTFO is out on Steam Early Access today, where it will stay for "a year maybe", according to Svante - but he only says this tentatively, and only when pressed: "It depends! None of us have actually worked on an early access game before, so it's a little unclear how much extra stuff we can put in for 1.0."

GTFO is cooking up the right ingredients, but I would say they need a little longer to boil. Those terminals are crying out to be put to better use, and the build I played (two weeks before the current one) packed a few game-breaking bugs. Given time, though, I can see me and my pals relishing every chance to wade deeper into GTFO's prison. I'll report back when it's time to GTFI.