Sound the horns, call in the bannermen, and prepare for the funeral rites. Fothad, governor of Circenn, is dead.

It’s fine though, I’ve got another Fothad. I’ve actually got another two Fothads, just sat around in my kingdom’s court, the apparent result of some spectacularly uncreative naming conventions in 9th Century Scotland. It’s not just Fothads that I rack up on my playthrough of A Total War Saga: Thrones of Britannia, either: I also pick up two Amlaibs — one a general, one a governor — a surplus of Ailins, and I’m on my third Dubgall by the time I unite all of Scotland under my rule. I know it’s the Dark Ages, guys, but can we come up with a few new names?

In another Total War game I might ignore the names altogether, worried much less about individuals and much more about the armies they commanded or the provinces they governed. But Thrones of Britannia, in attempting to present a tighter, more focused Total War campaign under the Saga banner, elevates the importance of the loyalties, capabilities, and predilections of these generals and governors, making their appointment and appeasement theoretically as important as good old fashioned conquest. That's even more the case after a major update, released in August, added new systems to complicate a game that at launch was surprisingly easy to win.

Selecting a good governor can drastically improve yields of both crops and cash in their assigned territory, while a good general, and the boosts they bring to morale, can make the difference between two evenly matched armies. But more important is loyalty: if a statesman starts to lose faith in the king — your player character — then they’ve got an increasingly good chance to rebel, spawning a stack of angry army men who will happily take all your towns while your back is turned. 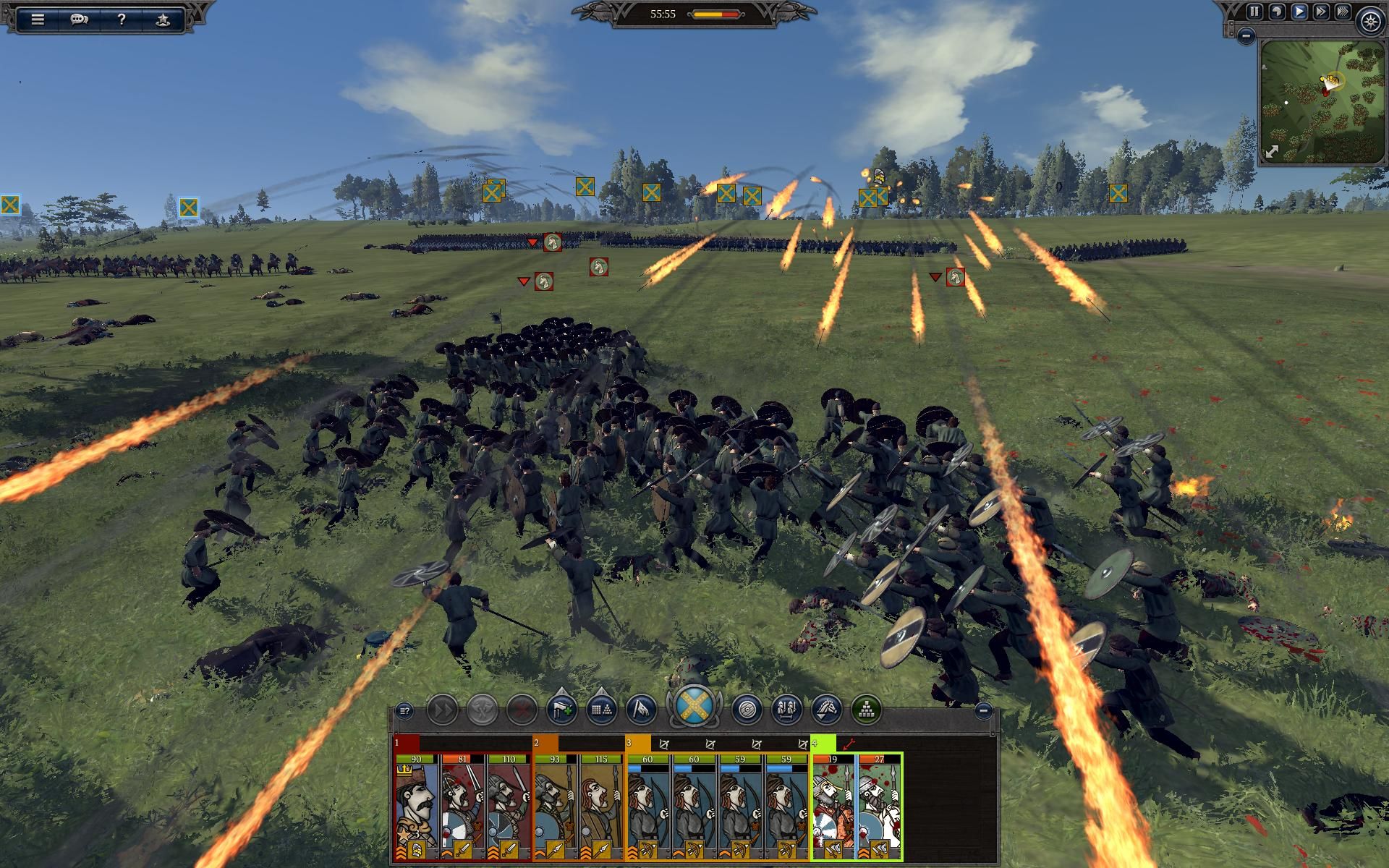 That’s how Fothad 3 went down. He’d ridden up north at the head of an army I’d sent up to claim the Orkney Isles, but came down south as a turncoat, his time away apparently convincing him that he was a better ruler than my King Aed. At least I’ve got my own name, mate. Thrones of Britannia offers ways to keep dissenting statesmen happy with cash — I could’ve arranged a marriage, raised my own influence, or just tried to buy him off — but I was too low on coin to spring for a bribe.

That left me trying to calm him down with the keys to a country estate. Estates were included in Thrones of Britannia at release, but the system was expanded upon in August's update. Where previously an estate was just a nice big house on some land, they now come in three flavours: religious, agricultural, and so-called “estate estates” (presumably named by Fothad himself, that one).

Before, doling out estates was a simple way to keep your peers in line, the process is now a little trickier, as Statesmen may also now have particular hankerings for certain kinds of estates. Some want to play priory with a religious holding, others want the farmland, while others just want the title. Other traits have been included, too, and some of my favourite characters decided they didn’t want any estates at all, but that wasn’t the case for Fothad 3. He didn’t just want estates — he wanted more estates than everybody else.

The maths made that impossible: I only had a handful of houses, and if I gave away one of my own estates, the rest of my coterie would turn against me, unimpressed by a king who can’t spend his summers in six different bedrooms. Fothad 3’s defection was a necessary sacrifice. Or so I thought. I hadn’t counted on his downward trajectory through my kingdom, and hadn’t placed any still-loyal armies in his path. The first two townships he took happened to hold the same estates that I’d doled out to my other statesmen, removing them from my — and their — control. Stripped of their land, and emboldened by my failure to contain Fothad 3, others turned against me, tearing my kingdom up in a few short turns. 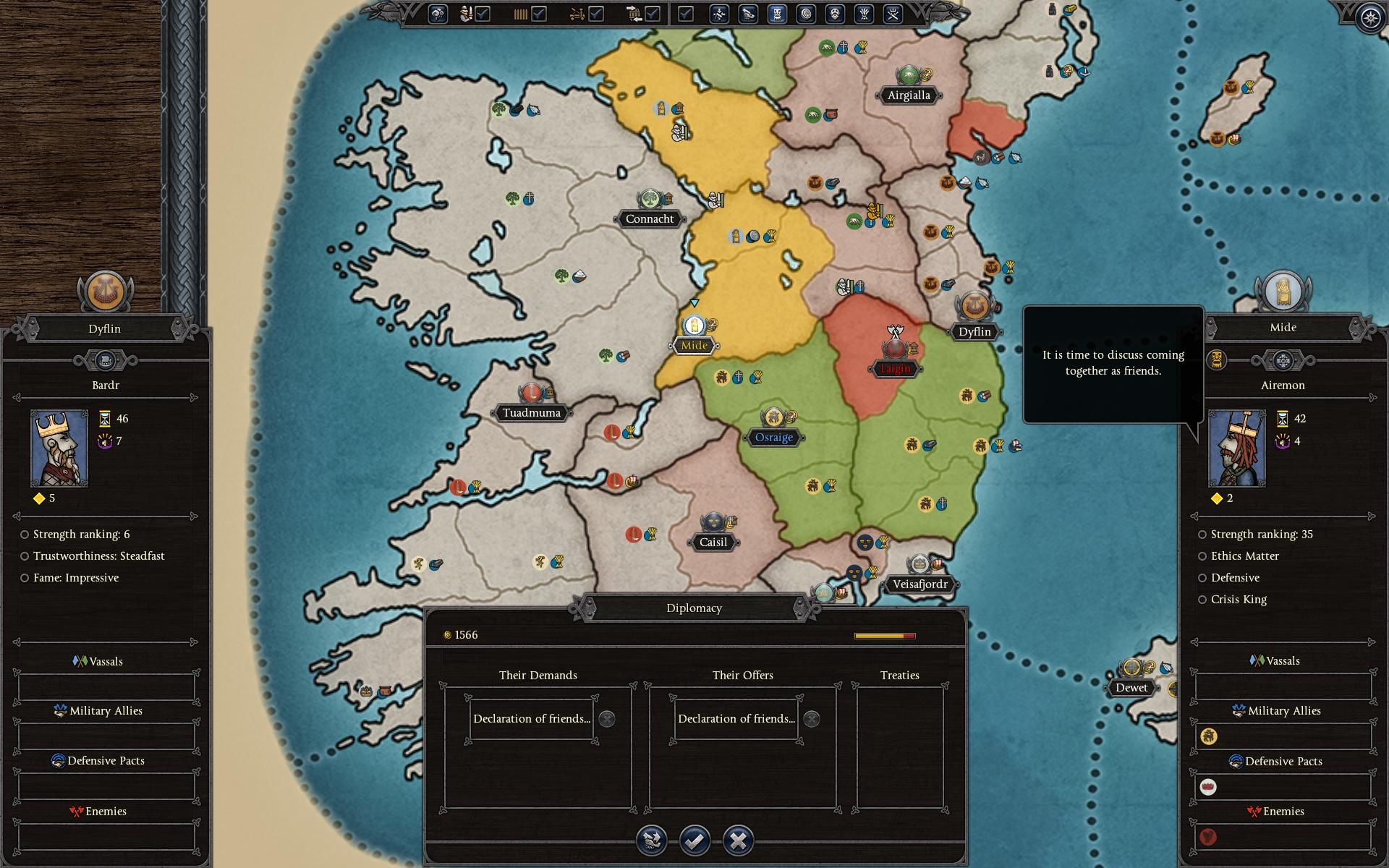 This focus on country houses makes Thrones of Britannia sound less Total War and more Escape to the Country, but on multiple playthroughs I had to do more micromanagement of my own kingdom’s machinations than I did conquering. The idea behind the statesmen system is solid: a way to simulate the shifting allegiances, tribal tensions, and lack of communication that typified the timeframe. But in practice the system is finicky and often arbitrary, the changes introduced in the August update not doing enough to make the system feel organic.

The abundance of Fothads does more than just make me despair for 9th century naming conventions: it also exposes Thrones of Britannia’s statesmen as robots. It’s a play to move closer to the personality of games like Crusader Kings 2, but even with fun traits giving governors and generals humanising things like a love for fishing or an infatuation with a new bride, they still feel more like wheels you need to grease to ensure their loyalty stays above acceptable levels. Keep them turning and you’ll be fine; fail to provide an estate at the right time and you’ll be summarily punished.

That punishment is particularly annoying when enemy armies have such an easy time of conquest. Garrisons are possible in province capitals, but their surrounding villages go down without a fight, meaning that a single general and his band of 20 horse buddies can conquer most of an entire coastline before you can mobilise a response. I’m not playing a Total War game to shy away from battles, but I’d rather be plotting world domination than spring cleaning at home.

Fortunately, taking land back from greedy usurpers is easier than it was at Thrones of Britannia’s launch. The August update also added an Allegiance system, tying penalties to public order to a settlement’s cultural allegiance. Conquer a long-held Viking province as an Anglo-Saxon and there will be more grumbling about your funny accent and English-y ways, but if you’ve just regained control of your ancestral lands a turn after they was stolen by some upstart then they’ll welcome you back with open arms. 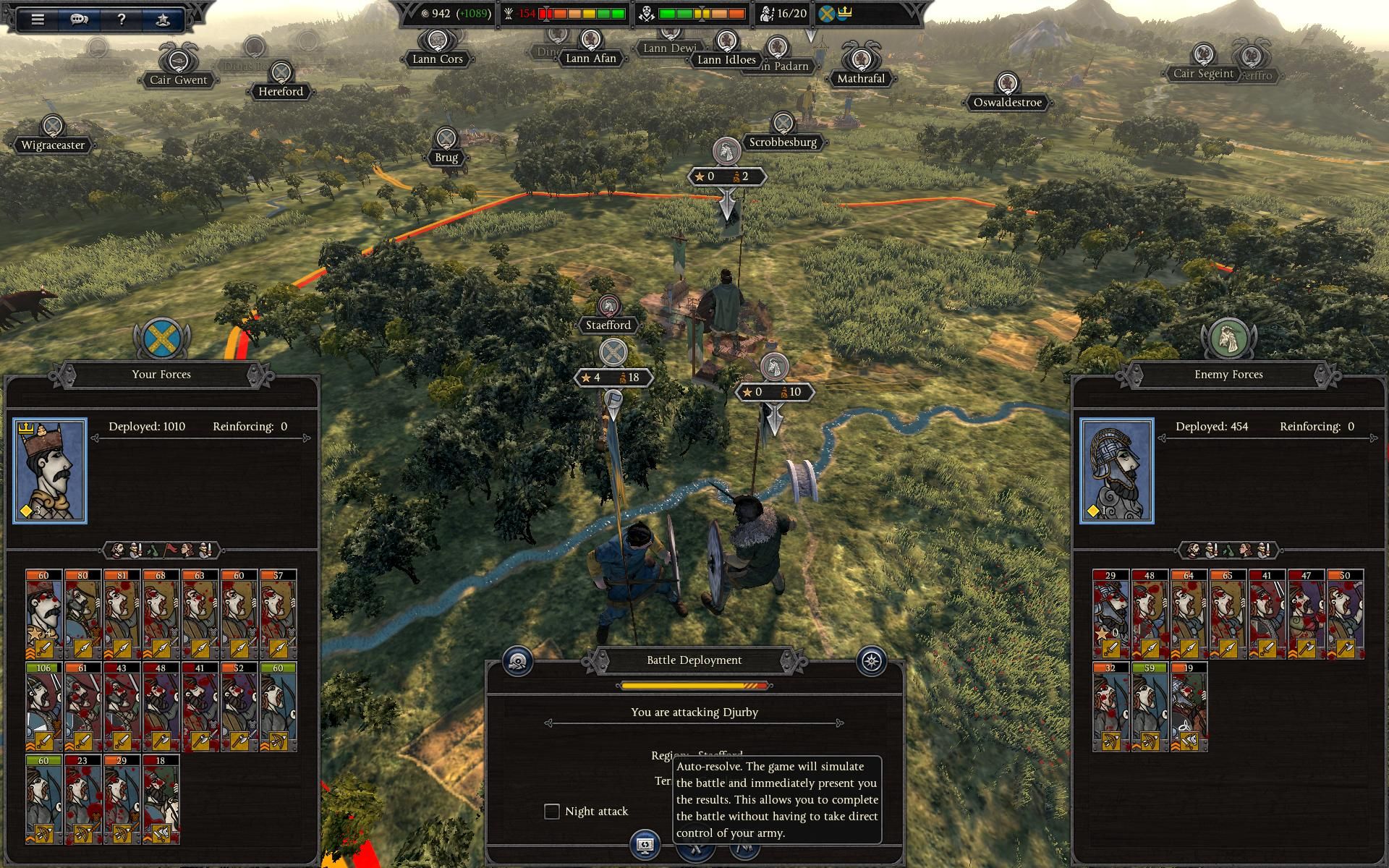 At least, that’s how it works on paper. In practice, I was able to flip the isle of Stornaway to the Scottish side after just a few turns of parking my army in its province, waiting until the allegiance meter had ticked over from majority Viking to Scots-friendly before moving on. The hits to public order from a misaligned allegiance can be nasty when you’re overstretched in the early game, but in the middle stages they’re easy enough to avoid by simply turning taxation off and waiting a few turns. Other options to boost order include specific buildings — like the church or garrison — and your governor’s retinue. These retinues are unlocked when your statesmen level up, and can provide bonuses including boosts to loyalty, increases to their land’s food production, and buffs to the soldiers under their command. For a more immediate fix, factions now have access to decrees that let them spend cash and a faction-specific resource — for Circenn it's "legitimacy" — to temporarily boost public order. Decrees can also be used to give bumps to loyalty, army replenishment, and other key areas, but I didn't find myself using them too often, the gold price too high for a short-term solution.

You can’t, however, quell public dissent with specific agents, as you can in other Total War games. The absence of agents means less micromanagement, but it also means there’s fewer options open to warmongering players other than rolling up a big ball of soldiers and pitching them at enemy townships. That strategy is as uninspired as Thrones of Britannia’s troop selection, which restricts players to a trifecta of infantry, cavalry, and missile units. There’s some variation from previous games here: battles hinge more on infantry, as cavalry are flimiser than you might expect, the propensity for soldiers of the era to wear plaid rather than platemail meaning that they can’t really hack sustained combat.

There are some unique units, too. As Circenn, I could hire war dogs, paying them in biscuits and head rubs to savage my enemies, and as seafaring Vikings, I was able to draft in some top-tier axemen. But these are minor tweaks to a well-worn formula that feels a little boring now — especially after the silliness of Total War: Warhammer and the eastern promise of Total War: Attila. Even Rome had war elephants. It’s hard to pin the blame on Creative Assembly themselves, who can’t exactly give muskets to 9th century Scotsmen, but what I wouldn’t give for some truly special units: some heavy cavalry, a few berserkers, maybe even a griffon or two. 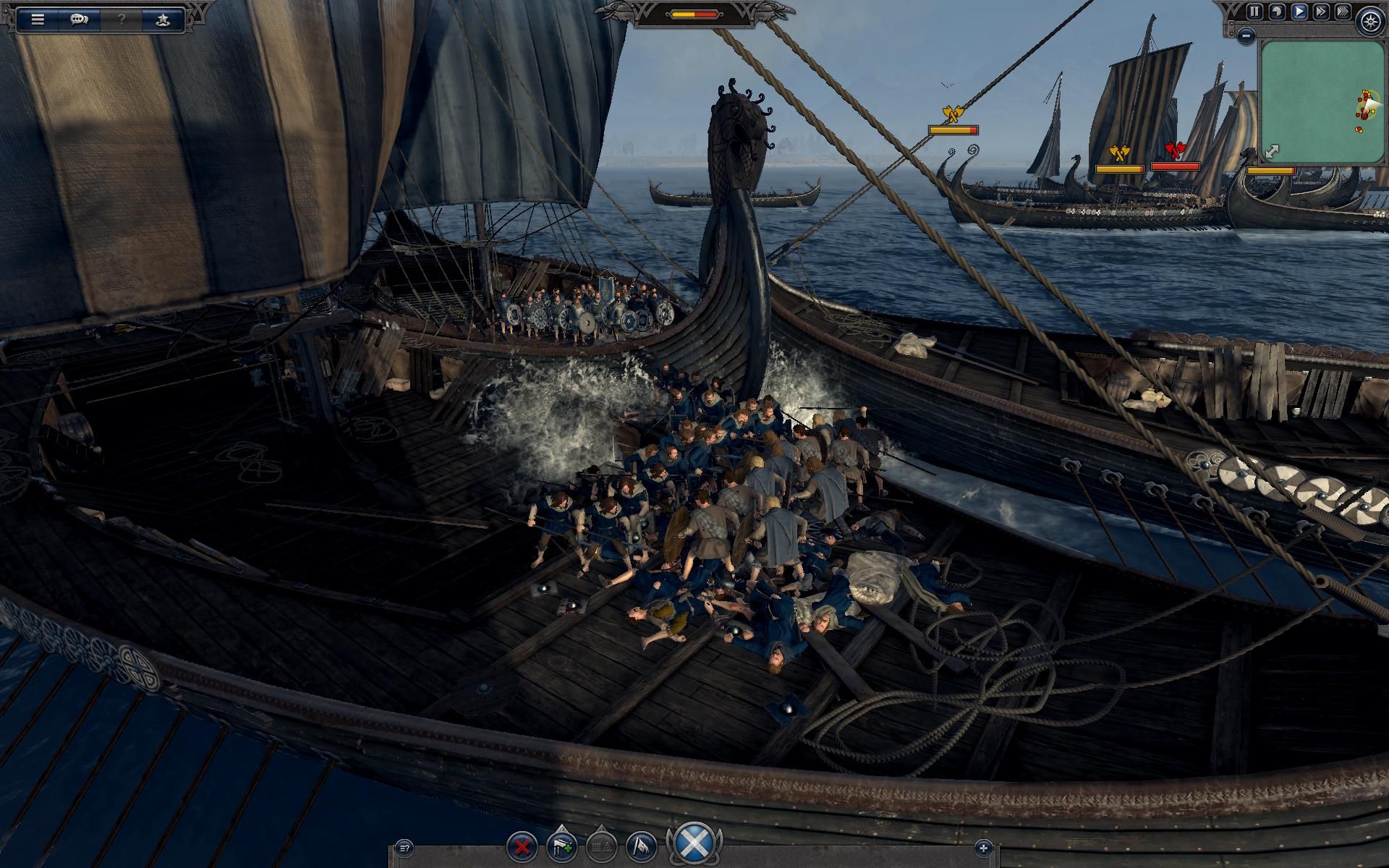 In the battles I fought, my most powerful weapon ended up being the game’s AI. It’s definitely improved since Rome II, but I was still able to take advantage of its dodgy pathfinding and planning to win fights I shouldn’t have. I made sure all of my armies had some ranged cavalry units — not for their direct combat power, but for their ability to harass marching enemies and kite high-value targets out of formation. I won one battle against a numerically superior Viking force by charging two javelin-chucking cavalry units across a river first and dragging their general around their backfield while the rest of the army waddled forlornly, one-by-one, into massed crossbow fire.

It is technically quicker to raise armies in Thrones of Britannia than in most of its Total War peers. Newly hired units spring into life immediately, and can be picked up from any settlement in your own territory, but they come into the world at less than half strength. This necessitates parking them at home for a few turns until they’ve attracted enough muscle to go out on the attack, and makes speedy responses to internal usurpers, Viking invaders, or incoming land armies as tricky as they would be if — as in other Total War games — troops took a few turns to train. That, coupled with the difficulties in maintaining multiple standing armies given a finite food budget, meant that I ended up sailing a single general around the back of my foes and nicking their unguarded towns while they did the same with my territory: a game of conquering keep-away that stymied long-term strategy and left me unfulfilled.

That leaves Thrones of Britannia slightly unmoored as the first entry in The Creative Assembly’s Saga series. It’s not as fully featured as bigger Total War games, but its arbitrary systems of estates, loyalties, and the newly grafted-on allegiance mean that it’s too heavy on micromanagement to be an enticing prospect for those turned off by Total War’s intricacies. Battles, too, lack the range of tactics, units, and abilities that make the series’ military combat more than a numbers game. There's still some chunky strategy here, and lots of stuff for history buffs — there aren’t many chances to visit such a detailed vision of 9th century Britain and Ireland — but Total War is done better in almost every aspect by one of Thrones of Britannia’s bigger brothers.