Hullo! John is preoccupied with wizards right now, so I'm taking over for the rundown of last week's top ten on Steam. It was an interesting week, bringing back some welcome old games and slamming in some shiny new ones. Largely, it's all about robots and survival.

"If you feel the Force, throw your hands to the sky," 5ive sing on their total choon Battlestar. And so great numbers of Force-sensitives have slammed on their cybergoggles and thrown their hands to the sky in time with beats in this VR-exclusive rhythm game. It's a bit like early VR hit Audioshield but with David Hasselhoff's glowsword from Starcrash, yeah? That's not to dismiss it: young Matt has been playing and said Beat Saber "is every bit as brill as I'd hoped it would be."

Battles royale may come and battles royale may go, but CS is forever. Some manner of change may by on the wind, mind. In April, Belgium's Gaming Commission declared that CS:GO's loot boxes (which contain weapon skins and other cosmetic bits) do violate the country's gambling regulations. We don't yet know what will happen with this, whether Belgium will press on or back down, but we live in interesting times as practises which have helped fuel the recent years of 'live' PC games come under scrutiny from regulators.

Sure sure, Ubisoft's open-world murderfests are formulaic and often irritating, but they offer fancy explore-o-murder on a scale and with a big-budget sheen that few other games can rival. You wanna pootle around a sandbox befriending animals and firing shovels at the faces of man and beast? Talk to Yann Ubisoft. 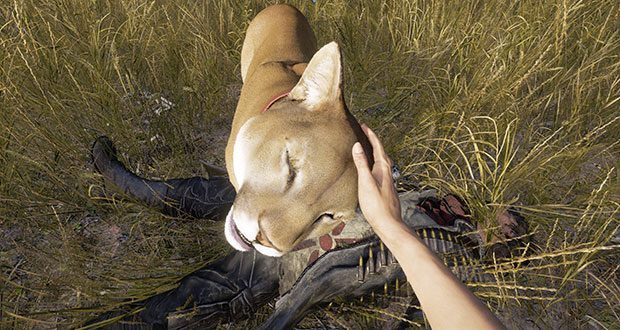 Ah I am so happy to see this keep bobbing back up in the charts whenever it goes on sale. It's such a wonderful game--one of 2017's finest--with such warmth and such fancy robomurder. But yeah, given that its well-known problems have gone unpatched for over a year I do understand people might want to hold back. Please play this video game; it is so very nice.

And we move from zippy robotic warteens to stompy gert warmachines. After initial grumbling in his BattleTech review, our Alec has slowly come around (with the help of mods) to delight in the turn-based tactical MechWarrior action, to the point that he's now shouting about taking an Arrow IV to the knee. Ha ha, video game jokes. I tell you what though, I'd like to see Nier: Automata's warteens dicing BattleTech's mechs.

After almost four years in early access, The Forest finally launched properly last week. It puts a delightfully terrible spin on survive 'em ups, crash-landing players onto an island which slowly reveals itself to house a tribe of murderous mutants. Good times.

The lovely farm-o-living RPG has surged back into the chants following the beta launch of its long-awaited multiplayer mode. Jay Castello had a wonderful time when she played, reporting back:

"Multiplayer Stardew Valley truly brings out the feeling of community that the single player tries to evoke and it led to a totally different farm life than the one I would have created alone. Encouraged to be much less conservative in my investments than I usually would have been, we ended up with a booming economy. But I also spent much more time just hanging out and fishing, an activity I largely ignored in all the previous time I spent playing."

's nice to have friends.

Can you survive the frozen wasteland hell that is England? AND IN THE GAME? Coming from This War Of Mine devs 11 Bit Studios, Frostpunk is a different sort of survival game, putting us in charge of the high-level strategic decisions that can keep our furnace stoked and our town alive through the frozen end of the world.

Xalavier Nelson Jr said in his Frostpunk review that it's "one of the most tense, exciting city building survival games on PC", which sounds great, but he didn't feel much emotional weight behind casually letting people die off for the greater good. Our Alec has started writing a diary series about his own time as an icelord too.

We're back to England in more Total War. This is interesting as the first official 'Total War Saga', a new side-branch in the series which will focus on exploring particular places at particular times rather than broad eras. This time it's Britain in the year 878, long before the land had any sort of vague unity. It's doing those Total War things in that Total War way, is my broad takeaway from Nic Rueben's Total War Saga: Thrones Of Britannia review, and hey evidently that's something people are quite fond of.

Last week's update has been huge to me, bringing an amount of polish and refinement that makes the game finally feel like it's ready to have left early access - rather than 12 updates earlier. Also god damn, I adore the new muscle car. Roaring down the highway in a muscle car convoy is such a treat.

The Steam Charts come via Steam's internal charts of the highest grossing games on Steam over the previous week, as compiled and released by Valve.