From my vantage point, there’s something enchanting about the snow-capped palisades of Dinefwr. Although I imagine its majesty is somewhat lost on the seven hundred exhausted Welshmen I’ve just ordered to breach the stronghold’s walls, with nothing but battered wooden shields between them and a typical British forecast of flaming arrows. I’d like to pretend their sacrifices come at the bitter end of a long, failed diplomatic campaign. Truthfully though, like so much of the conflict in history, they had something shiny, and I decided I wanted it.

This is Total War, however, so before navigating the perils of battle, it’s necessary to navigate the perils of the labyrinthine UI. Helms off to Creative Assembly for making it not only workable, but attractive. Drop down menus make shuffling through armies and provinces intuitive, which you’ll come to appreciate. The exclusive focus on the extremely disunited kingdom means a smaller landmass, but densely populated provinces with multiple settlements, each of which can be built up to provide different resources or research paths. It really pops, too. The stained glass and wood carving motif reinforces the sense that you’re writing your personal legend into history, which means it’s always fun to imagine the glassworker who has to immortalise your brutal pillaging in glittering detail. 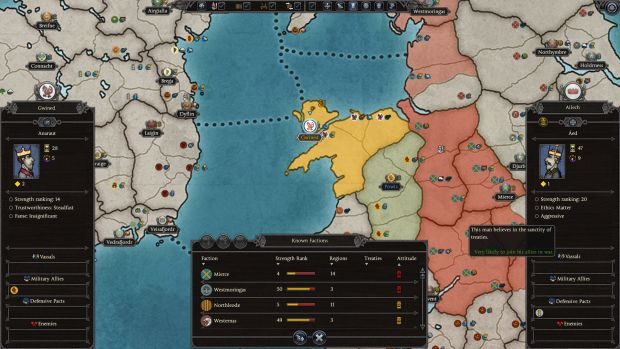 Thrones of Britannia includes ten different factions split evenly across five cultures. There’s two each for English, Welsh, and Gaelic. There’s also four Viking factions. Two for the regular land vikings and two for the Viking Sea Kings, an aspirational title if ever there was one. Not only can my enemies get in the sea, they can also pay me a tribute for the privilege of drowning.

A narrative thread running through each campaign influences the direction of the early turns, but so do the faction-specific rules. Welsh factions are bloody heroic, they are, so ranking up heroes and owning Welsh land grants bonuses. The Sea Kings collect tribute from other factions, and also take slaves after battle. Common to all factions is a meter tracking your populace’s War Fervour. Your people might cheerlead a few victories, but years of seeing their countrymen march off to war and never return will eventually take its toll on their happiness. 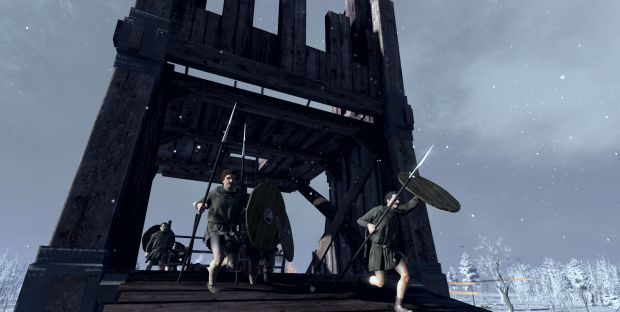 Faction-specific units are few, so personality comes from unit specialities. West Seaxe has some seriously nasty late game cavalry, for example, and a few units of Welsh archers with flaming arrows will make short work of an approaching siege tower. Those coming from Total Warhammer might be disappointed that the most novel thing on offer here is units of ferocious war dogs, but it’s still satisfying to watch a charge of pugilistic puppers who’ve just decided the opposing frontline have biscuits in their pockets.

You bolster the ranks of your army from a universal pool that can be accessed from any owned settlement, regardless of buildings. The disadvantage of marching into the pub and thrusting a spear in the hand of whoever hasn’t passed out already is that units are recruited at a quarter total strength. A number of factors affects replenishment, but generally, it makes forethought and planning an absolute necessity. Early on, I made the mistake of leaving weak borders unguarded, and had to make do with hastily cobbled together levy spearmen to defend against sieges. Initially weak units also mean that attrition can be a serious problem, as starvation or seasickness devastates an already threadbare force. 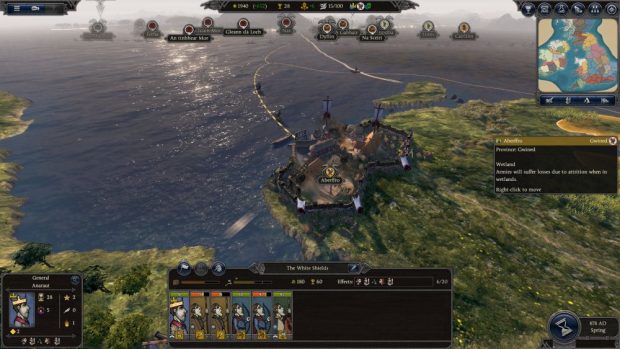 Playing as Alfred of West Seaxe, starting with so many provinces also made loyalty and betrayal a very real concern. Options for subterfuge are many, but a real drain on your coin stash. More reliable is gifting your disloyal underlings one of the estates you’ll accrue during your time spent painting the map your colour. Marriages, dishonor, and getting stabby are all at your disposal, providing you have the coin to pay for it, and the influence to deal with the potential ramifications. 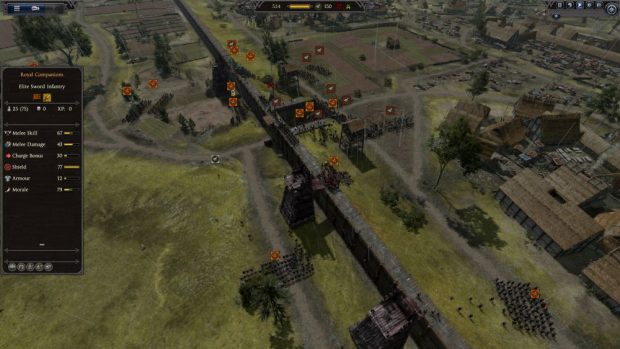 Character progression comes in the form of retinues, which are basically just a group of lads so enamoured with your kingly beard that they follow you o’er hill and vale, begging for hot grooming tips. Each time a character levels up, you’re given a point to either add a new follower or upgrade an existing one. If you’re planning on having an army steamroll through a few rival provinces, add a champion for command and charging bonuses, and a quartermaster to increase movement range. Combine a forager and a pillager, and play havoc with the enemy food supplies while nabbing a gold bonus every time you reduce a stately manse to matchsticks. Governor eyeing up your table scraps? Priests keep them loyal, and scribes scrounge up extra cash. 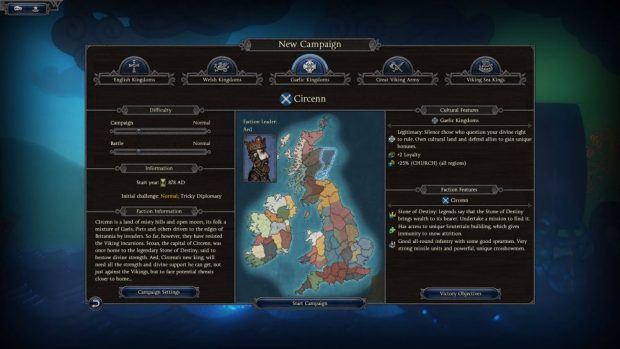 There’s also siege engineers, and whether you decide to take them or not, siege combat is where Thrones of Britannia shines like a stolen crown. Major settlements are distinct and memorable, displaying the same density and detail as the rest of the map. Moats, islands, bridges, and wide city streets means plotting and executing multi-tiered master plans is endlessly satisfying. War drums echo like thunder, pipes make pipe noises, and siege engines tear up soil in a stunning iteration of the venerable series’ trademark spectacle. 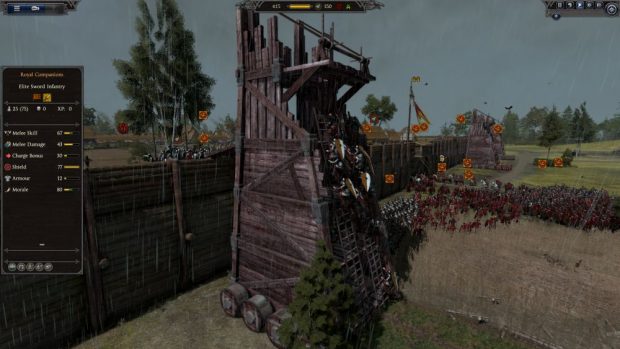 Coming down from these moments, however, the cracks can sometimes show themselves. Abstracted systems are a necessary albatross in strategy of this scale, but after the dynamism of the tactical battles, things like automatic trade routes and simple tech trees can feel like poor representations of the political and social machinations they aim to simulate. After a few stretches hitting the ‘end turn’ button after not doing very much of anything, it becomes apparent that Thrones of Britannia’s streamlining may have come at the cost of some of the series’ intrigue.

It’s also worth noting that, on standard difficulty with an easy starting faction, I was able to breeze through the campaign to an ultimate victory in a single night of play. For the last quarter of this campaign, I was at a constant food deficit, frequently bankrupt, and pretty much shrugging off both diplomacy and my own populace. Trickier factions have much more precarious early games, of course, but it was a little disappointing to be able to brute force my way through so many hindrances. Thrones of Britannia's many systems started to feel like optional indulges, rather than tactical necessities. On the plus side, commanding an unstoppable legion of red caped bastards is probably the closest I’ve come to feeling like Tywin Lannister, so there’s that. 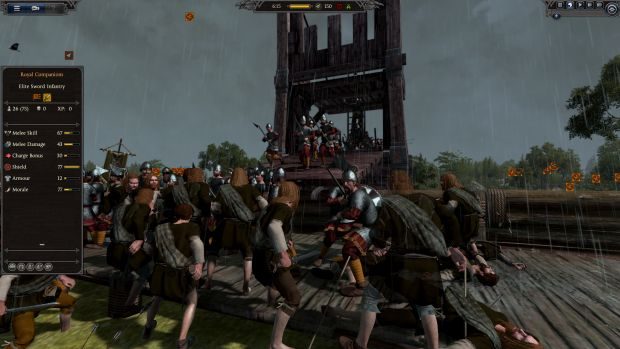 After the clattering of hooves and the din of hoarse war chants, it can feel odd to return to a tactical overlay that, while occasionally tense, can often feel vacant of meaningful choice. It’s all focused firmly towards evoking the period though, and here, Creative Assembly’s love for history absolutely bleeds through. Or would, I guess, if there was any blood in the game. There’s a greyed out ‘DLC’ tab on the main menu, though. Make of that one what you will.