The way I see it, there are only two significant failings in Far Cry 5. These are its story and the way it creates action in its open world. "But Alec," asks the imagined reader who hangs on my every word and doesn't just skip to the end in the hope I actually have something worthwhile to say, "doesn't that mean basically the whole game?"

"Ho-ho," I reply in this farcical imagined conversation in which I have already been infinitely more erudite than I am in any real conversation, "you have fallen for my clever introductory ruse designed to either make you nod in furious agreement or raise your fists heavenward in furious disagreement, and in either case you are now unable to resist the siren call to read on. And if, somehow, you are not, how about this: Far Cry 5 blossoms from infuriatingly stupid caterpillar into beautifully madcap butterfly once you have summarily murdered its terrible bosses."

There are shovelfuls of minor ones too, but honestly, I really do think there are only two significant failings in Far Cry 5, the story and the way it creates action in its open world. I share John's distaste for the former, and particularly his frustration at how, at certain junctures, this sandbox game will forcibly interrupt me with yet more pompous cutscenes that take a painfully long time to say nothing at all, and will further add that the 'Faith' magic drug-witch character comprises some of the most woefully vapid videogame storytelling in recent memory.

What I'm saying is that a Far Cry 5 in which the entire narrative design comprised a single sentence at the start reading "kill the bad men" would be a significantly more intelligent and rewarding Far Cry 5 than the one we got. 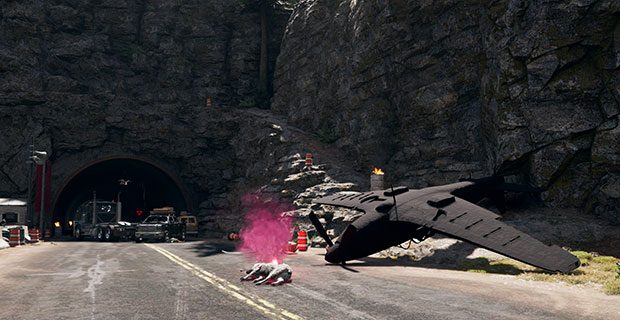 But even then, we'd still have the other problem, one that you can't skip wholesale by pressing Escape. That being that, unless you're knee-deep in a setpiece mission, Far Cry 5 sprays countless angry bad men all over the place like a dog shaking itself dry after a swim in a sheep piss-polluted stream. Sure, sure, you're the de facto rebel leader running amok in a landscape in which almost everyone else is mindlessly obedient to the local man-bun'n'mumblecore despot (the plot is inconsistent on the question of whether this is a cult of personality or if Drugs Did It), so it's hardly the place to be if you're after a relaxing country stroll-about.

Even so, this forested tract of Montana is a big old place, with an infinity of places to hide and no shortage of treacherous terrain, so the propensity of dozens of Bad Men (each of which are allocated one of five faces) to near-instantly arrive at the one place you stood up in for five seconds is quite remarkable. I'm particularly impressed by helicopter pilots' ability to discern, from 1,500 feet, that my scorched and blood-splattered checkered shirt is meaningfully different to the thousands of other blood-splattered and scorched checkered shirts worn by most everyone else in this blighted but beautiful place.

The overall effect is of a game pathologically afraid that its players might become bored. Wherever you go, unless you're locked into a crouch and a long way from roads at all time, barrow-loads of bellowing killers will arrive. While you're fighting one lot, another two groups of them will likely arrive, and during all that at least one hapless neutral NPC will drive their car into the the thick of things. Literally so, given how chaotic the driving AI is - these guys will plough right into a firefight, attempt to drive right over a truck or up the nearest wall, and the consequence of that is only more and more wreckage, explosions and pile-up. 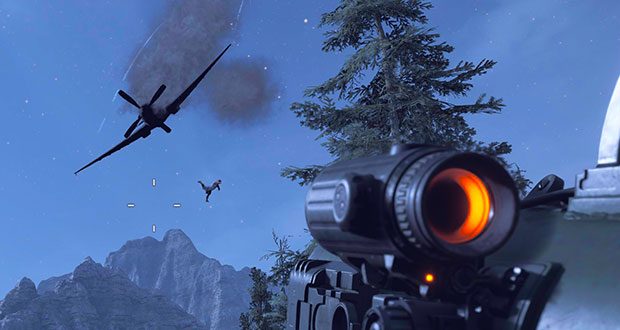 It's a spectacle, sure, but most of all it's simply annoying, like being repeatedly stopped by people hawking Burger King discount vouchers or surveys about your opinion on Vodafone while you're trying to walk through town to catch a bus.

Here's an example, a short tunnel in the North of the region, which I fetched up at after completing a nearby quest, and decided to hang around just to see how mad things would get. The answer: yeah, quite mad. Planes falling from the sky, random bear attacks, van after van after van full of Bad Men... So much wreckage, so much death. This ten minutes of unbridled chaos while staying on the same tiny stretch of mountain road is very much The Far Cry 5 Experience:

Now, you might argue that all this is because I, the Most Wanted in this place, hung around the same spot, word inevitably got out and every enemy in the area zeroed in on me. That would make sense. That is, however, not what is going on here. The game's unseen Director Of Constant Ridiculous Action does not care where you are, how long you've been there or even what you're doing. All it cares about is that you're there, and therefore it will rain down enemies upon you for as long as you are. Because if it didn't, why, you might have the time and space to question what the heck you're doing with your time and stop playing, and we just can't have that, otherwise you might not buy the DLC.

Between this and the diabolical, forced 'capture' cutscenes which happen three times per zone, exploring Far Cry 5's gorgeous environments can feel a lot like going to the cinema only to wind up sat next to a boozed-up stag party group who are convinced you're profoundly interested in the tale of how Dezza once took his trousers off during the Arsenal match. A surprisingly ambient game of exploration and random adventures that I greatly enjoy, held hostage by the screeching cacophony of focus-grouped #engagement. 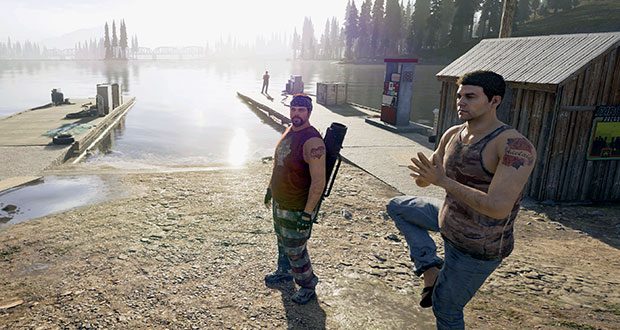 There is, thank the unspecified god that the endless cutscene dialogue forgets to say anything at all about, a solution. It does not, unfortunately, take the form of a big button on the main menu marked 'Time-wasting Bullshit On/Off'. What it requires instead is pouring at least a dozen hours - and potentially as many as 30 - into the game, and, I'm afraid, actively seeking out all of Far Cry 5's most wretched storytelling in quick succession.

The game map's divided into three primary zones, each of which has an overlord who will grow increasingly angry with you as you complete resistance missions within that zone. As they grow angrier, the zone will grow hotter - more enemies, better-armed enemies, enemies in helicopters, and so forth. You'll also, as I say, get captured a couple of times, and made to sit through more painfully long cutscenes about nothing at all, but on the third time this happens, you get to go kill the overlord afterwards. And then? Then there is bliss.

The zone doesn't become enemy-free, but it does massively dial-down the number of roaming or teleported-in Bad Men, by-and-large replacing them with equally interchangeable friendly NPCs. Finding trouble is not at all hard - you can scan with your binoculars, investigate unvisited locations or take up one of the many, many missions you've yet to do - but, crucially, you now go looking for trouble, as opposed to trouble endlessly, comically finding you whenever you have the temerity to have a quick look around. 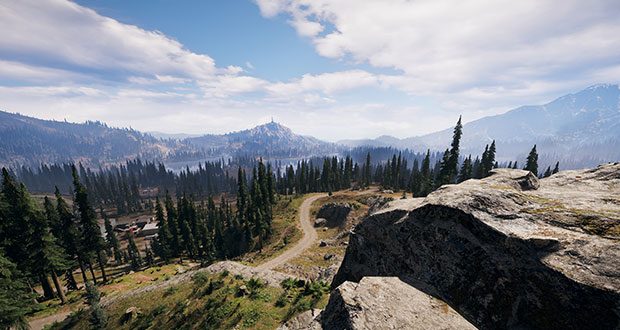 I've flipped the Time-Wasting Bullshit button to Off in two of the three zones now, and I'm so happy noodling about them, finding secret hideouts, going fishing, wingsuiting from clifftops, taking on races, liberating strongholds - all that good Far Cry stuff without the bad Far Cry stuff. I have, many hours later, zero inclination to go to the other zone and finish the story. I'm having too good a time exploring the now-sane other two.

I can now go to that same tunnel in the video above and, though I'll see plenty of traffic, it won't become a twenty-car, forty-body pile-up. I can climb the mountains nearby or glide down to the valley below and, probably but not definitely, I won't get shot at until I start shooting at something. You might call that boring, but I call it playing on my terms, free to explore this amazing space, following an untaken road and very possibly finding a firefight at the end of it. That feels so much more tense and considered than the constant human pinata it was before I beat the boss. Icing on the cake is that I never, ever have to hear another pointless word from that boss' dreary mouth again.

The more I play Far Cry 5, the more my certainty grows that this a very considered game in a surprisingly soulful place, at risk of suffocation from a very ill-considered game draped loosely on top of it, which howls and screeches in what it believes is expected fashion. I had to do 30 hours of digging first, but now I've found my way to the gold.