“Less is more”. A classic advertising slogan isn’t it? I imagine a minimalist house with shelves that fold away discreetly and a glass coffee table that sits in an expanse of glossy white. They’re often marketed as an economic use of space that cuts out any unnecessary noise. I don’t disagree! If anything, I can see the appeal. But I prefer homes with a bit of character. Sentimental objects everywhere, stacks of books strewn on desks, low beams and old fireplaces. These are the sorts of spaces I like, where all the clutter has history and gives the place personality.

Ubisoft clearly designed Assassin’s Creed Valhalla with a brochure of the former open, and I came away from my hands on demo feeling like the world they’d crafted was certainly beautiful, but largely devoid of things to do. Throughout my playtime, I craved the feeling Assassin's Creed Odyssey gave me, of barrelling through a map littered with icons and crashing into its caves and forts and chests. I wanted to dash between markers, but instead I was left spinning in the English countryside.

I get why Ubisoft have toned the quest markers down here, as it's become a running joke that every game they release comes positively exploding with bloatware. I mean, take Odyssey for example. It was a trillion years long and packed with an almost insurmountable number of things to do. Most of it trivial too, like handing a packet of herbs over to someone's mate who lived literally two seconds down the road. Opening the map to look for something else to take your fancy, you'd end up brushing over all the map markers in a sort of overwhelmed trance. 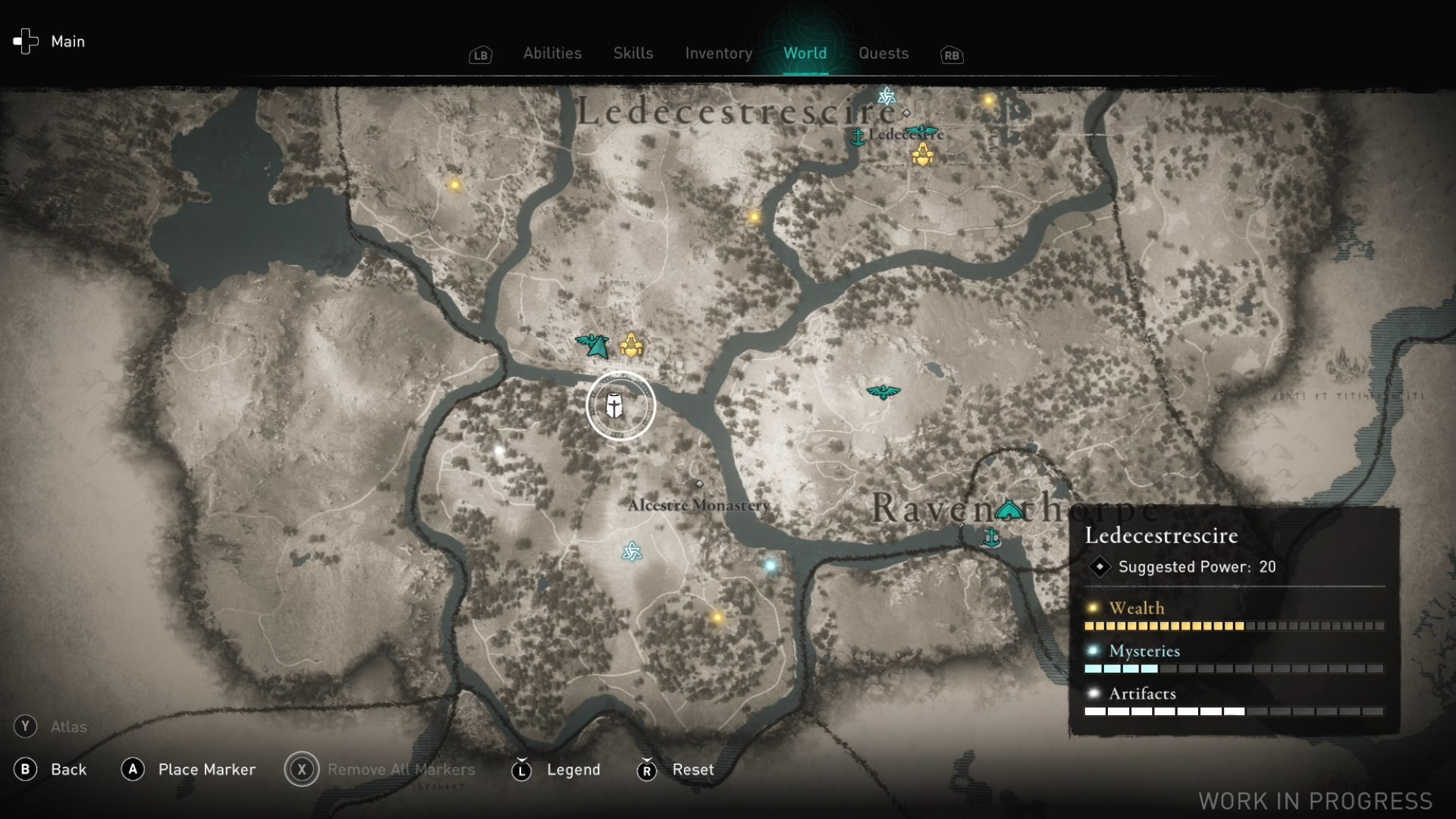 But for me at least, it still feels like Ubisoft have stripped the activities back a bit too much. I don’t think I'd have felt so passionately about this had they treated the world like a boutique, with hand-picked artisanal content on the map, so that no matter what you found you’d be guaranteed a deep, rich experience every time. Instead, almost all the side activities I got stuck into didn’t seem any more complex than before, with the only difference being that there were less of them.

Case in point: I gunned towards a (rare) quest marker and stumbled across an ancient altar against a background of towering, gnarled trees. Ominous symbols were etched on stone, candles burned next to withered bones, and a blood spattered bowl stood at the centre of it all. Upon closer inspection I found I had to offer up three hare’s feet for something mysterious to happen. Woah. This had to be spooky. So after a brief spell of clumsy hunting, I plopped three hare’s feet into the bowl and eagerly anticipated a proper haunting.

A flash! A Skill Point. Oh. 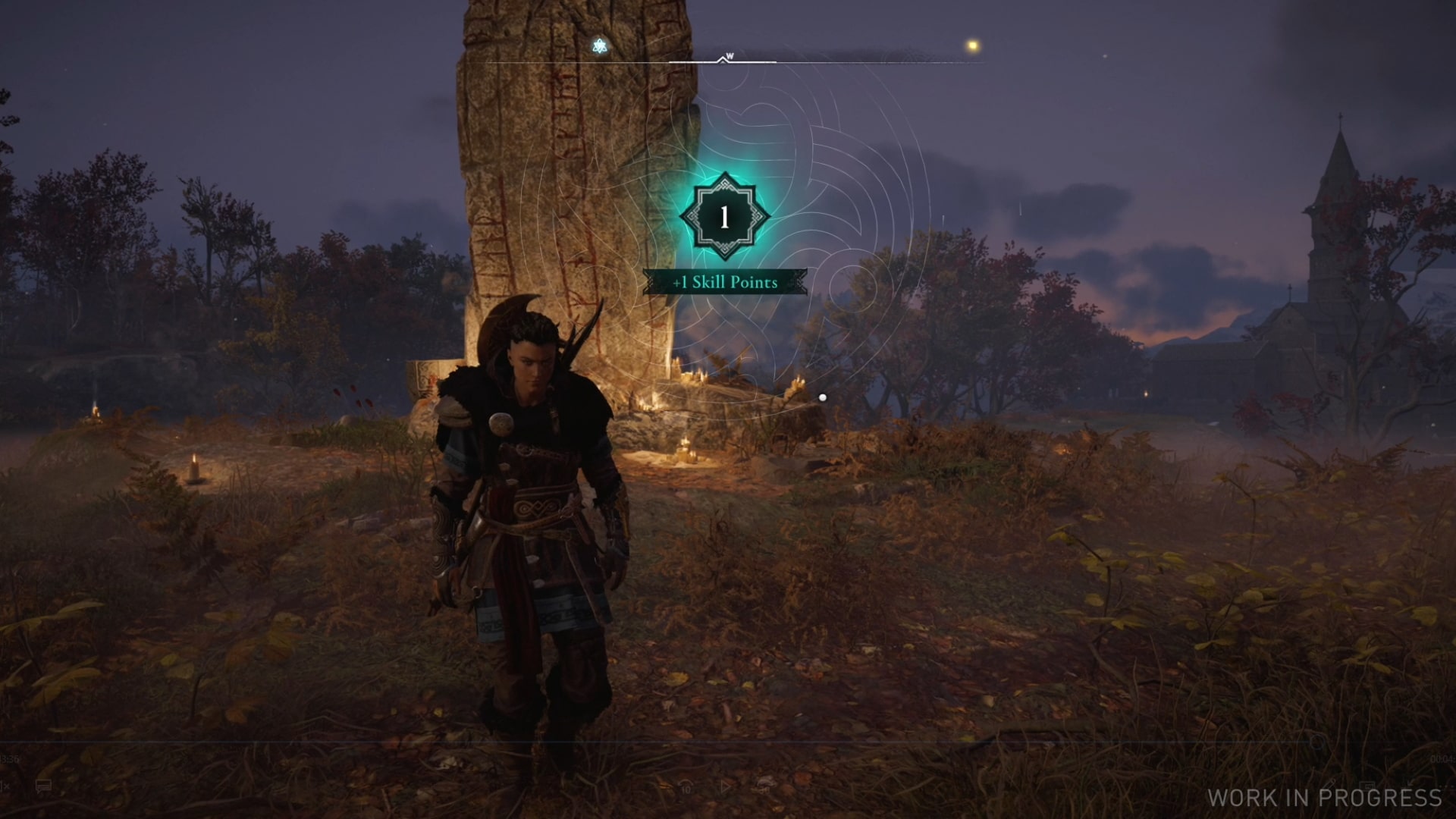 It happened again with another set of stones. They each had one slice of a big rune on them, and I quickly realised I had to stand at a certain angle so they’d all match up and form the rune as a whole. After figuring it out, a sweet animation happened where I sank to the ground, meditated, and blue energy rose up from the earth.

Okay, I know I’m being a massive grouch, and I do want to put it out there that I did really enjoy some of the side quests I encountered out in the wild. I remember having a good old chuckle escorting a beefy bloke who’d eaten some dodgy mushrooms and was determined to fight anything that moved. In the end I had to carry him home after he’d puked his guts up at a bandit camp. 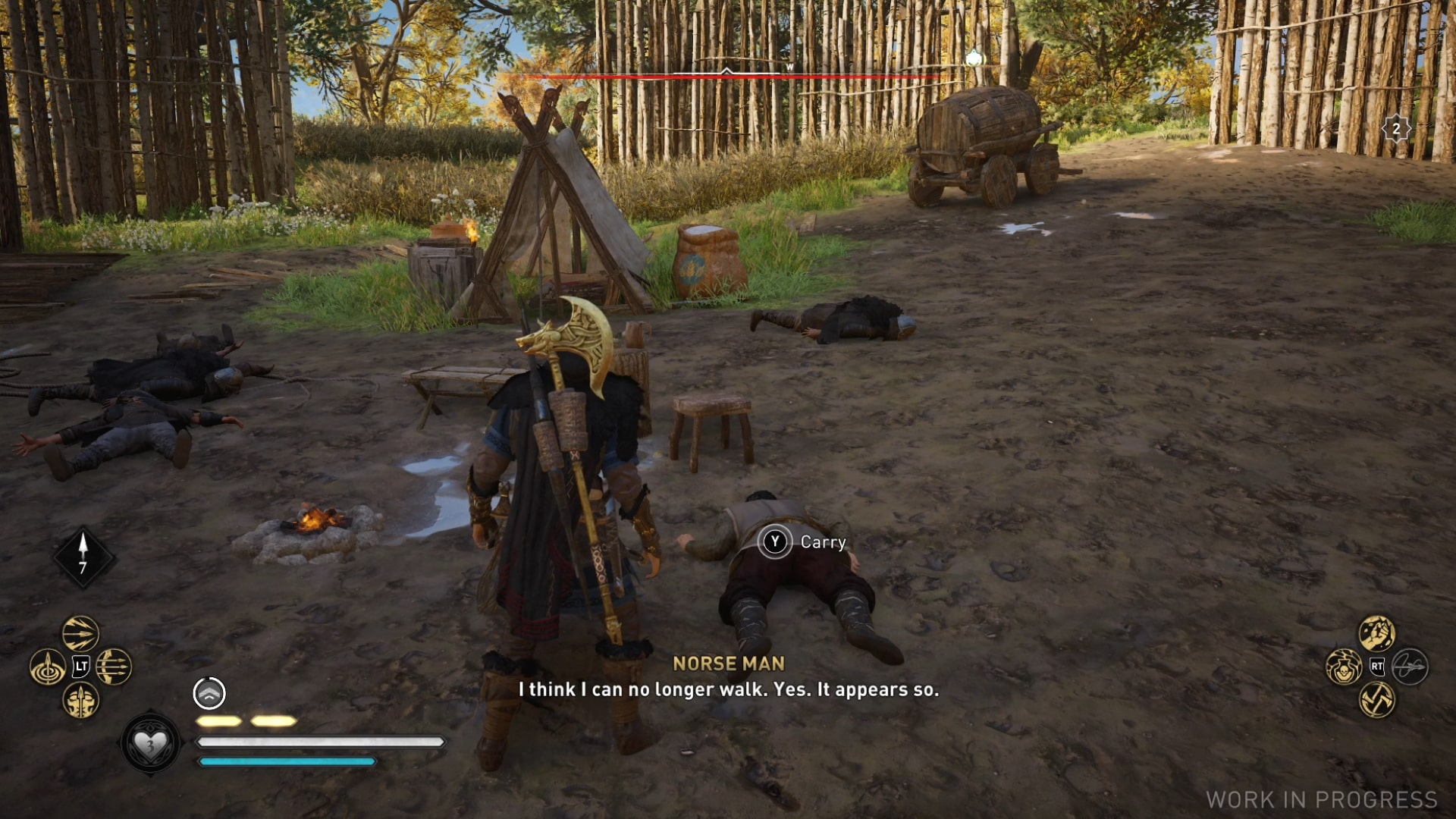 I also sampled some shrooms myself, and triggered a bizarre hallucinatory puzzle sequence. A number of gates appeared and I had to “observe the signs” to complete it, whatever "it" was. The signs in the instance were actual seals who’d flop towards the gates or point their podgy noses in a particular direction. For the life of me, I couldn’t figure it out (but I bet the reward was a Skill Point, anyway). 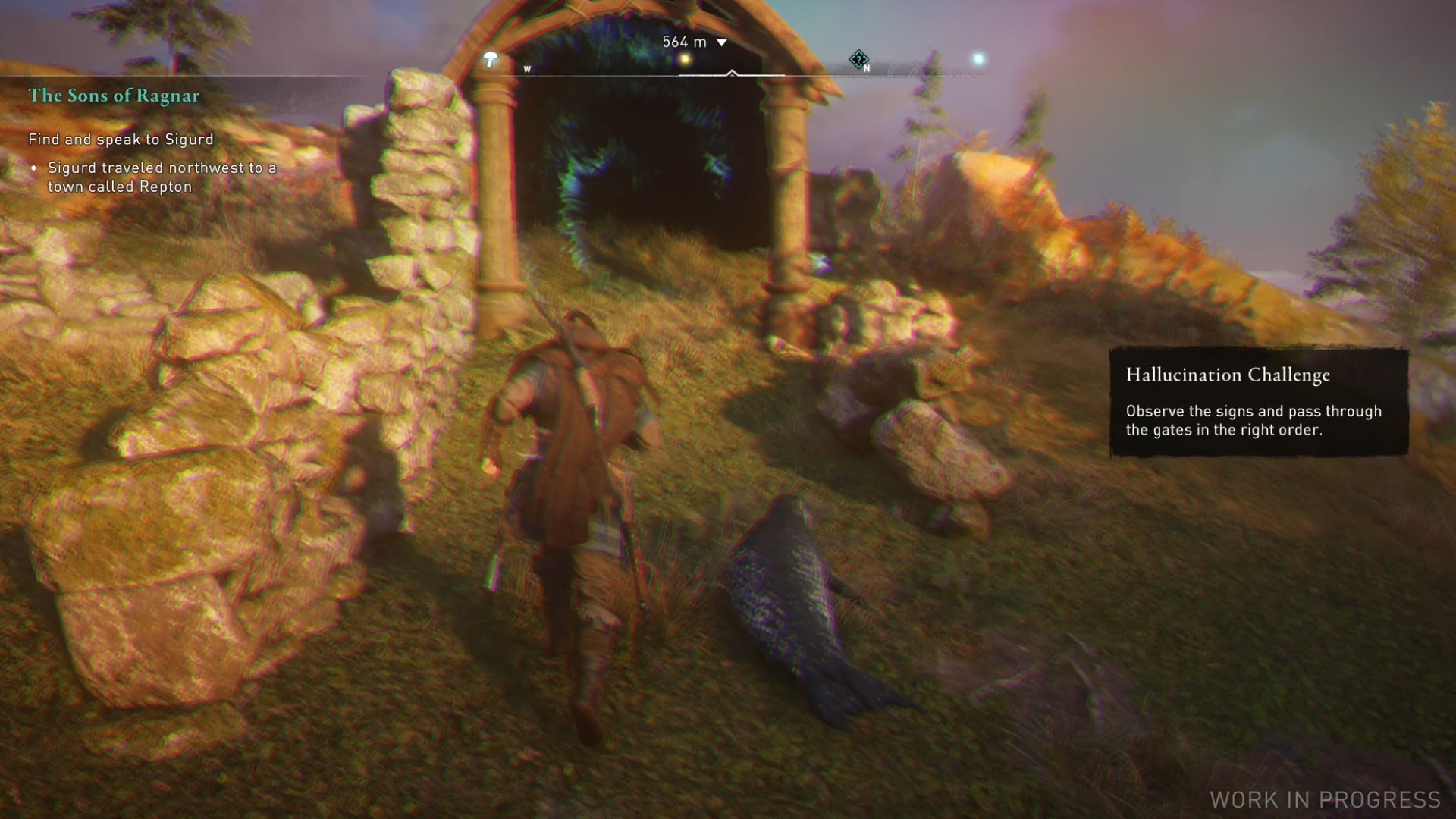 Another time I bumped into a huge geezer standing guard outside a tower in the middle of nowhere. In conversation it became clear he spoke in rhyme, and if I wanted to gain entry without the secret password I’d need a Flyting level of three (a secondary skill you pick up through Viking rap battles, basically).

I didn’t have the gift of the gab, but he dropped hints that the password was stashed somewhere nearby. After a quick head scratch, I found it hidden up a tree, gained entry, and hesitantly followed him into a dingy basement. Turns out it was a secret fight club for sweaty, half-naked folks who loved swinging fists as much as they did spitting rhymes.

After getting involved in a couple of scraps, I found quite a touching note on a table. It described how each brawl “sweaty and agonising as it may be, always ends with kindness. A hug. A pat on the back. A headbutt.” And that there was nowhere else they’d rather be.

Maybe if I won against every challenger I’d win the hearts of these kind, bloodied folk? Maybe some romance on the cards? A new Viking raid buddy? Unfortunately I didn’t have the time to find out, but it did present a ray of hope: Perhaps some quests do have the capacity to really go somewhere.

I got this feeling the most from a couple of wannabe Viking raiders who I encountered while trotting about on my horse. They were arguing over whether to torch a house and I didn’t know whether it was possible for me to help them out, or if it was one of those quests which would start if I just kicked dust until they stopped chatting. To my surprise I found I could actually set light to the house's thatched roof by chucking my own torch on it.

I soon learned they were massive wimps and that the house I’d set ablaze was their mother’s - nice one lads. Once I’d saved her stuff from being burned to a crisp, they thanked me and went on their way. The pop up was the real highlight here. It said I'd completed “The Twit Saga, Part 1”, which gives me more hope that there could be lengthy, emergent storylines knocking around England. You just have to get out there and find them. 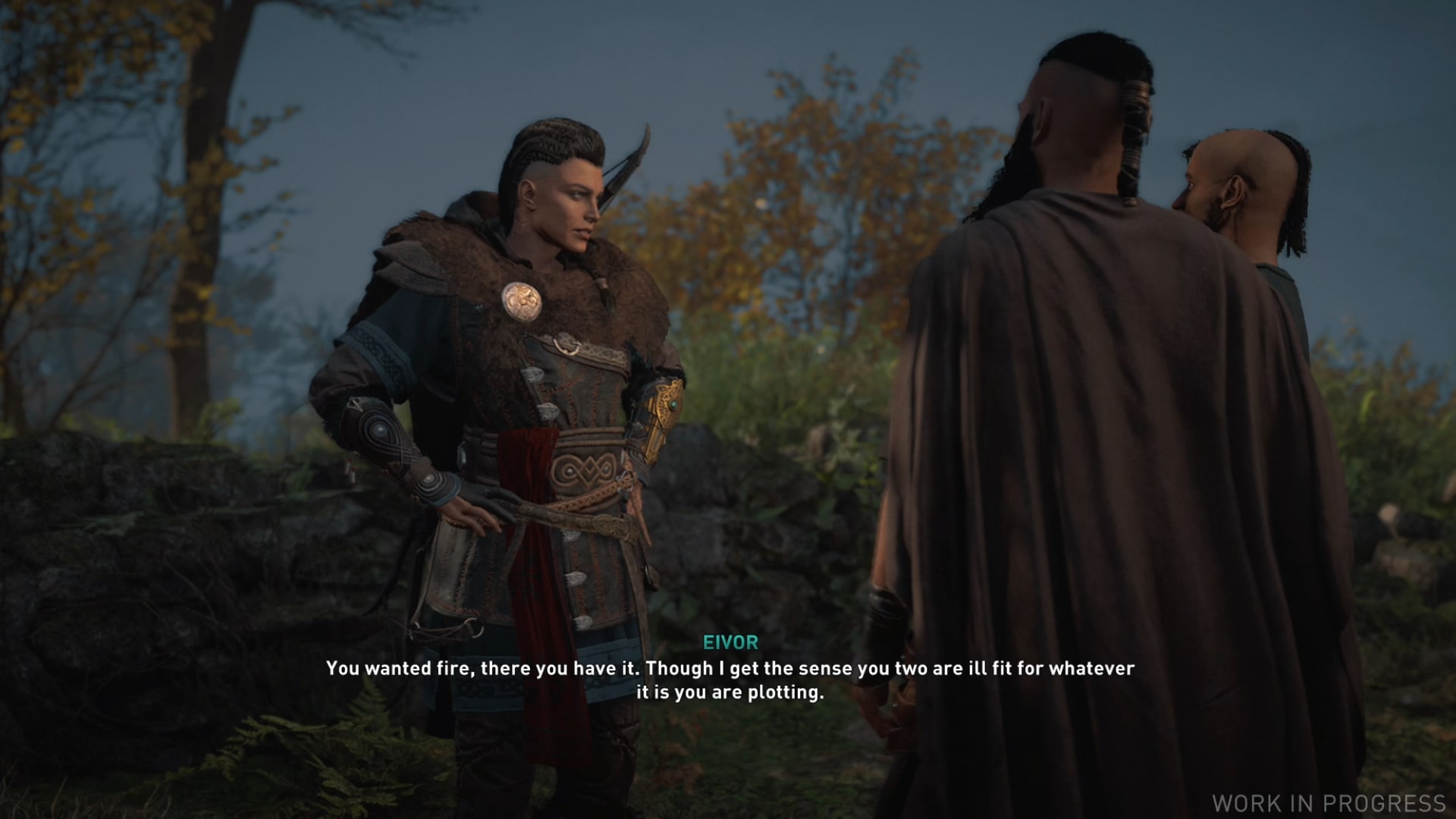 I appreciated that some of these jolly experiences weren’t marked on the map and that Ubisoft trusted me to go out and explore. I was just expecting more from many of them, and I'd hoped at least a few would end up being somewhat similar to those from The Witcher 3, where they'd start off small but unravel into full blown epics. This at least would've offset the lack of things to crack on with.

It might come down to the fact that I still think of Assassin’s Creed games as junk food restaurants rather than those fancy boutiques. I view my time with them as a quick bite to eat, where I zoom between points, clear quests, then log off for the evening. Alice B was far more into Valhalla's greater emphasis on exploration. When it comes to being a less than stealthy Viking, I'm clearly someone who wants to scurry about a world chock full of clutter with French fries hanging out of my mouth.