If you click on a link and make a purchase we may receive a small commission. Read our editorial policy.
This is The Mechanic, where Alex Wiltshire invites developers to discuss the difficult journeys they’ve taken to make their games. This time, Return of the Obra Dinn [official site].

Towards the end of Return of the Obra Dinn’s four-and-a-half years in development, Lucas Pope had a friend come over to playtest it. He sat him down, explained how it’s a firstperson mystery game in which you discover the fate of the Obra Dinn, a merchant ship lost on its voyage into the Orient. Then he gave him the controls. “He played for a bit and his response was, ‘This game is about the book’.”

The book comprises a ledger of the Obra Dinn’s unfortunate crew and illustrations of it in happier times, a map of the ship, and chapters that outline each death along its strange voyage, and it’s where you propose your theories on the name of each character and how they died. As such, it serves as your key interface to the game, or as Pope puts it to me, “On the surface you think it’s an exploration game, but then you realise that what you’re really doing is using the book to figure shit out.”

But it started out as a manifest, a simple list of names. You can actually still play Obra Dinn as it was in a demo which Pope released for GDC 2016. It features five characters’ deaths to solve, and playing it today, it might seem to be pretty close in design to the final thing. But that’s an illusion. 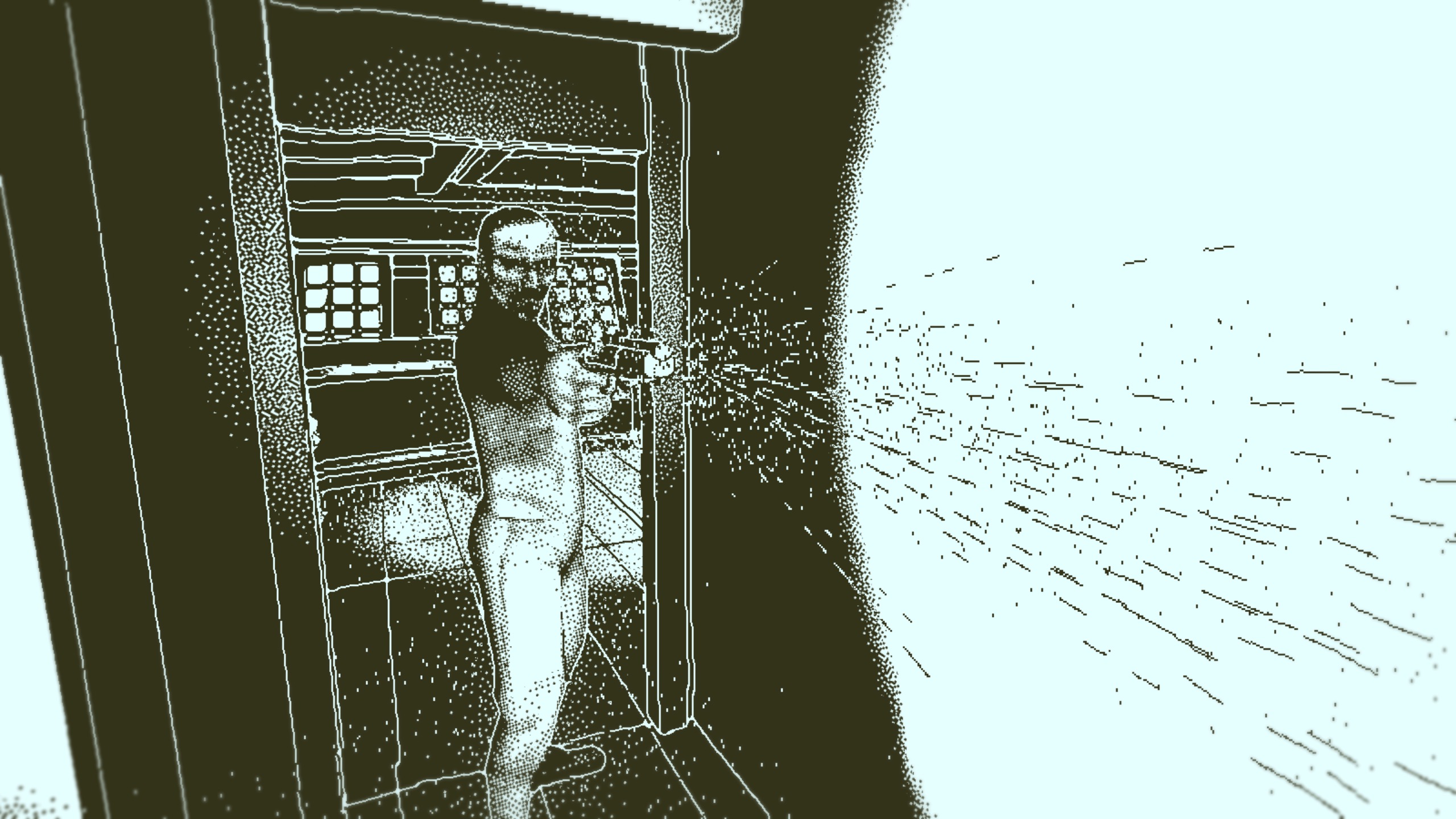 “This is the thing with Obra Dinn. I didn’t see how it would play out,” says Pope. “I had no idea about anything beyond the first 15 minutes, which was the first demo.” But the manifest’s list of six characters seemed to work just fine. He liked the way the names were laid out, echoing the way the real East India Company treated its crews as lists of names. “I wanted in the game to show some of that, where you really only think about them as names at first, but you get to know them and you realise that they’re more than names, they’re people.”

Pope felt confident that the game was coming together well, so he wrote the storyline, a twisting tale which encompasses the explanation of 50 deaths within a set of extremely rigid restrictions. For example, Pope could only tell the story at the fragmented points of each crewmate’s death. That’s because you, the player, get to witness that moment as a 3D tableau, frozen in time. And because these scenes are accessed by you using a magical pocket watch on a corpse, Pope also had to work out the logistics of presenting a trail of deaths for the player to follow. “Just figuring that out was really the biggest challenge of the game.” 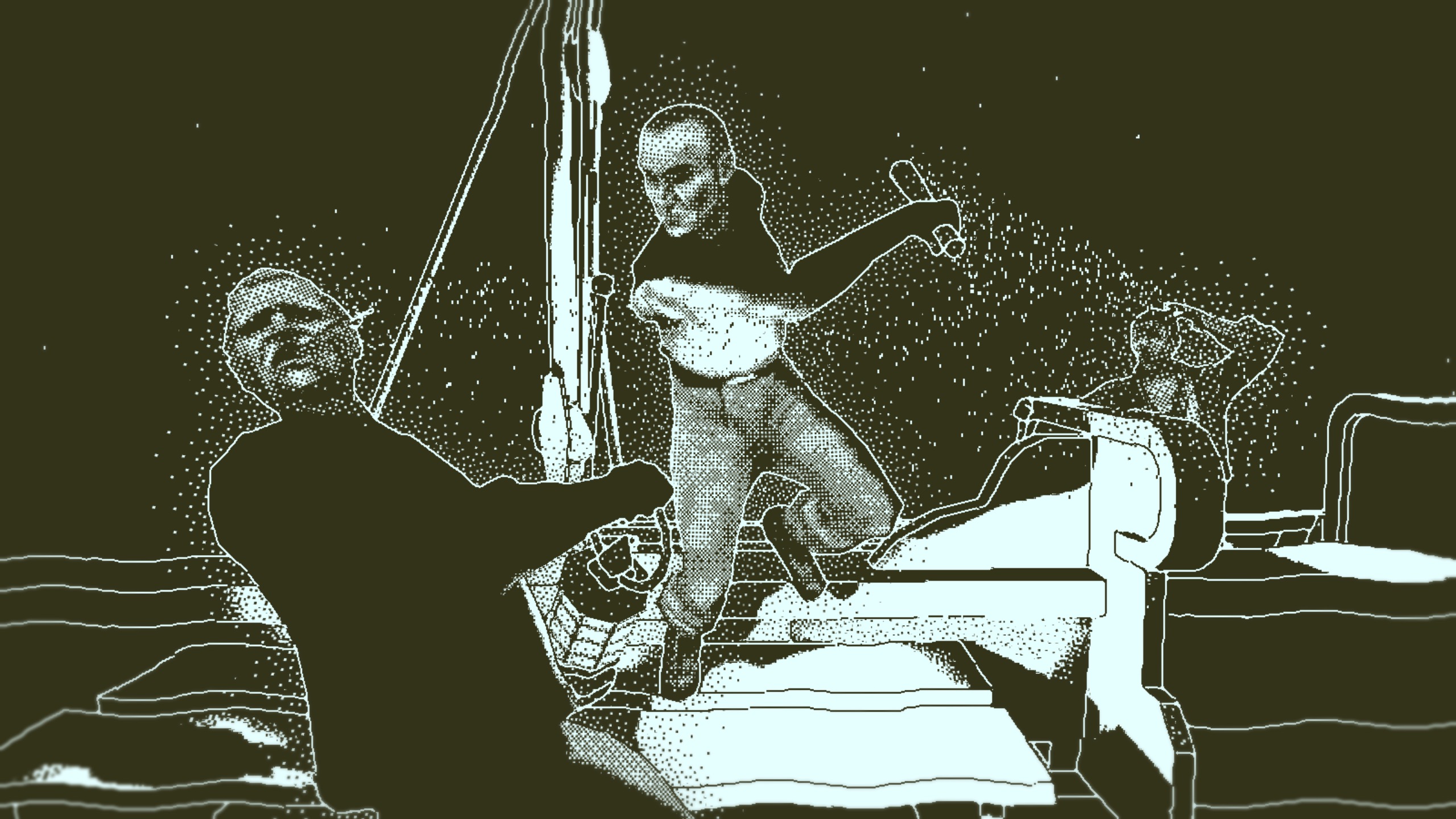 But he succeeded, laying the plan out in a spreadsheet-like tool he made to cross-reference crew names, deaths, locations and times. He then wrote scripts for the short snippets of dialogue that play out before each scene is revealed and drew the sketches of the crew and maps of the ship. Finally, he put it all together in a new demo and in November 2016 took it to PAX Australia.

It was a shock to see how the game played. Unlike Pope, the PAX players didn’t already know the storyline backwards. He hadn’t appreciated how the original demo’s five deaths, each presented in chronological order, were followed by a new section which features 13 new characters and a series of deaths that are out of order. “This game is linear and all narrative based and all baked, and there was no point I could sit down and play it to get a feel for what it’s actually like,” says Pope.

His PAX experience showed him he’d gotten things badly wrong. “The core challenge was that you see the story out of order, there are 60 fucking people, four decks, flashbacks that are totally non-chronological.” When players came across bodies, they wouldn’t know when their deaths happened. Clearly, the manifest wasn’t enough to help organise the storm of information the game was throwing around.

So, how to give the events a structure? The answer came in the form of headings. What if a scene was called The End, Part Three? That would naturally sit after Part Two, and therefore in a defined position in the overall narrative. “Once I had that, it was pretty obvious this should be a book, because suddenly you could flip through it like a timeline,” Pope says.

Pope doesn’t really like to make games that need explicit tutorials. Papers, Please managed to express its core mechanics through play itself, and while he knew Obra Dinn would have to hold players’ hands a lot more, he grabbed at any intuitive feature he could. The book provided a perfect metaphor for a timeline, naturally affording the ability to flip back and forth through its pages and thus through the time of the story. 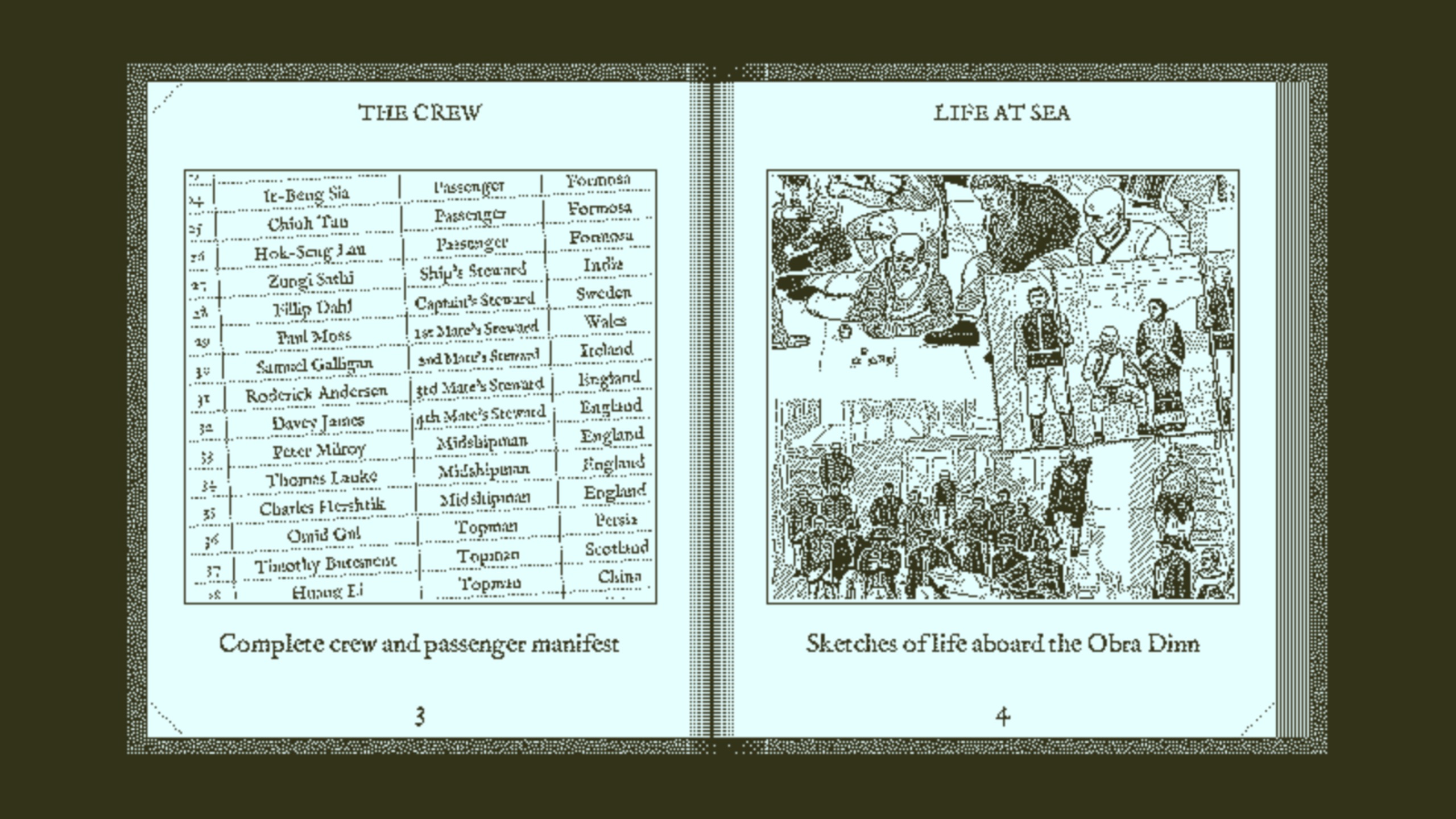 Still, it was a pain to lose the manifest. In thematic terms, Pope liked the way the impersonal list of names contrasted with the way the game would gradually reveal them as people. As an illustration of how important this is to him, the reason why dialogue transcripts feature a cross next to lines spoken by the character who died in the scene, but don’t distinguish between spoken lines by other characters, is “because I don’t like reducing somebody to a letter”.

But on a practical level, he knew the book would pull into a world of work he wanted to avoid. When development began on Obra Dinn, Pope had just finished localising Papers, Please, which was “the kind of thing that scars you for life”. Papers, Please has tens of 50x100 pixel documents which he’d originally manually laid out in English himself, pixel-by-pixel. Localising them into seven other languages, fitting the translations into the same space, was gruelling. He promised himself Obra Dinn would have “the most basic UI I could get away with, so the manifest was like that, very basic, nothing fancy, three pages.”

The book imposed a whole lot of new UI. Its looser layout avoided a lot of the technicalities he faced localising Papers, Please, but entailed a lot of complicated programming. He also had to design a way to navigate the book, starting with a gamepad scheme because he knew it’d be harder to create. There are plenty of little nuances, such as separating the D-pad selection from page turning to avoid accidental page turns. He added a bookmarking function so you easily can refer back to all the scenes in which a single character appears (“everyone knows what a bookmark is”). And he had to avoid the temptation to add shortcuts between chapters and bookmarks. There’s just one shortcut, which flicks to the table of contents. “Anything else would need a lot of instruction, so it was the simplest thing. Then, once you decide you won’t have that many features, teaching isn’t that hard because it’s just a book. The player will figure out to turn the page.”

But he wanted the book to definitely look like a book. “I was thinking, could I print it out, and would it look cool?” He added a feature that most players probably won’t have noticed, that the gutter, the central divide between facing pages, moves from one side of the spine to the other as you flip through its pages. “You’ve gotta think I wanted it to look like a book if you want to make it do that.”

And yet Return of the Obra Dinn’s book is not a book. It’s almost a HyperCard stack, and it’s where you perform the key actions in the game, identifying each character and how they died. What’s more, its chapters start out blank, magically filling in with details when you witness each scene. The design of that sequence, of seeing a character’s death and its page appearing, was another challenge, and Pope only solved it a month before the game came out.

Until that point, the scene would appear for a minute, the book would appear, and then the game would send players back to the present, giving no further opportunity to examine the scene for clues. Pope’s change was to allow players to wander around after the minute plays out and the book fills in, but he knows it still leaves players waiting for the book to appear so they can start adding their solutions. “To fix that would have been a lot more work,” he concedes. “I felt, OK the game’s not perfect but I felt that after four and a half years, I could ship it. You can get a little ship-happy, basically.” And besides, that minute of forced time with the scene slows you down, helps you notice the details you’ll need to solve the game’s mysteries. 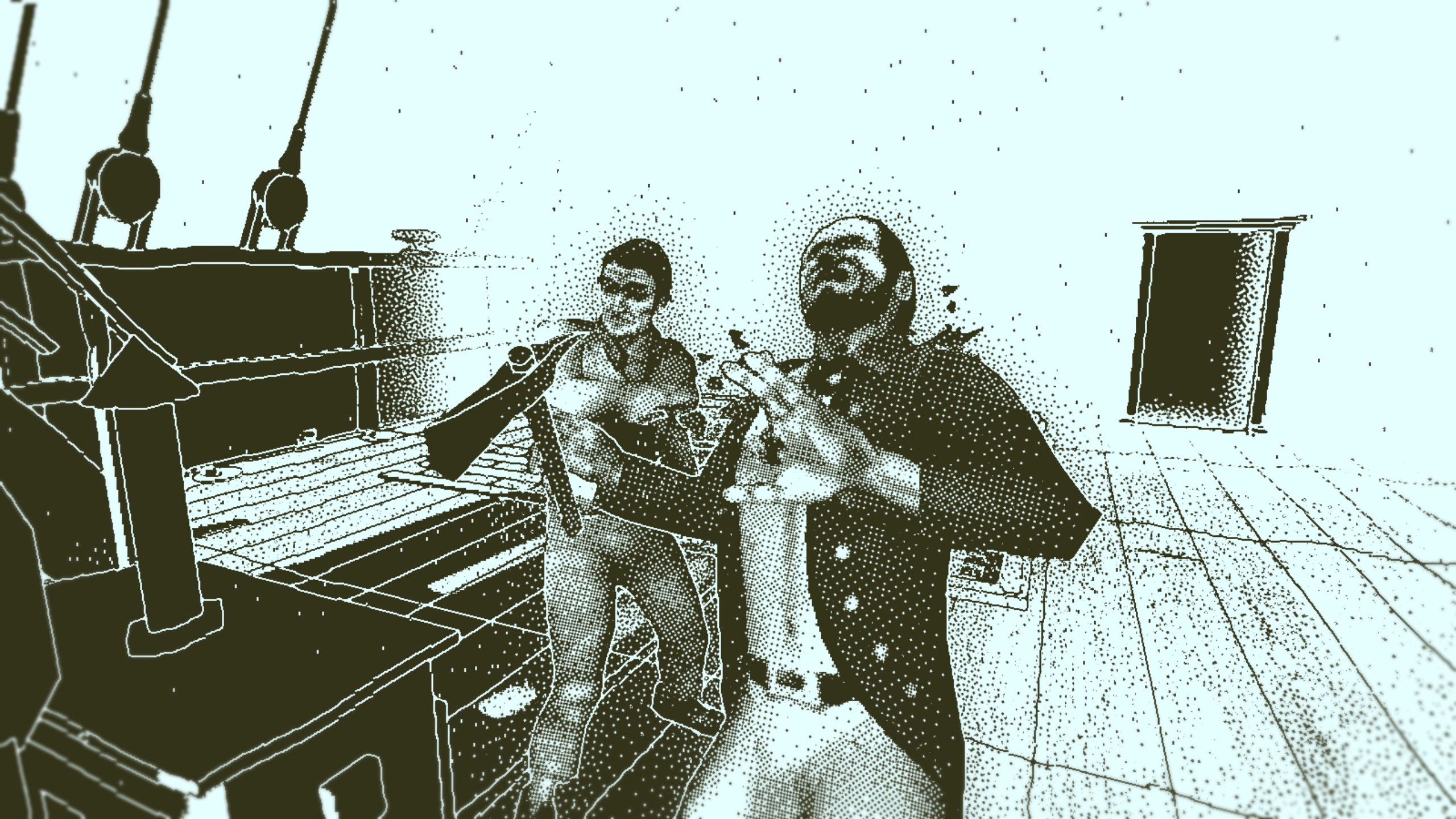 Return of the Obra Dinn is filled with little inconveniences like this. After all, it could just have a button that exits a scene. “I really didn’t want that, that’s game thinking, an external thought process,” Pope says. And you can’t replay scenes without schlepping to find the body to use the watch on it, even if it’d be simple addition to the book’s set of functions.

”That’s one of the risks, gambles, I took that I take a lot in my games, where I inconvenience the player in order to hold the mood, the sense of the rules I’ve set up,” Pope says. And in Obra Dinn he bound himself up in rules. “This game was a juggling of restrictions: 1bit, story only told when someone dies, just layer upon layer of things that I could not do.” 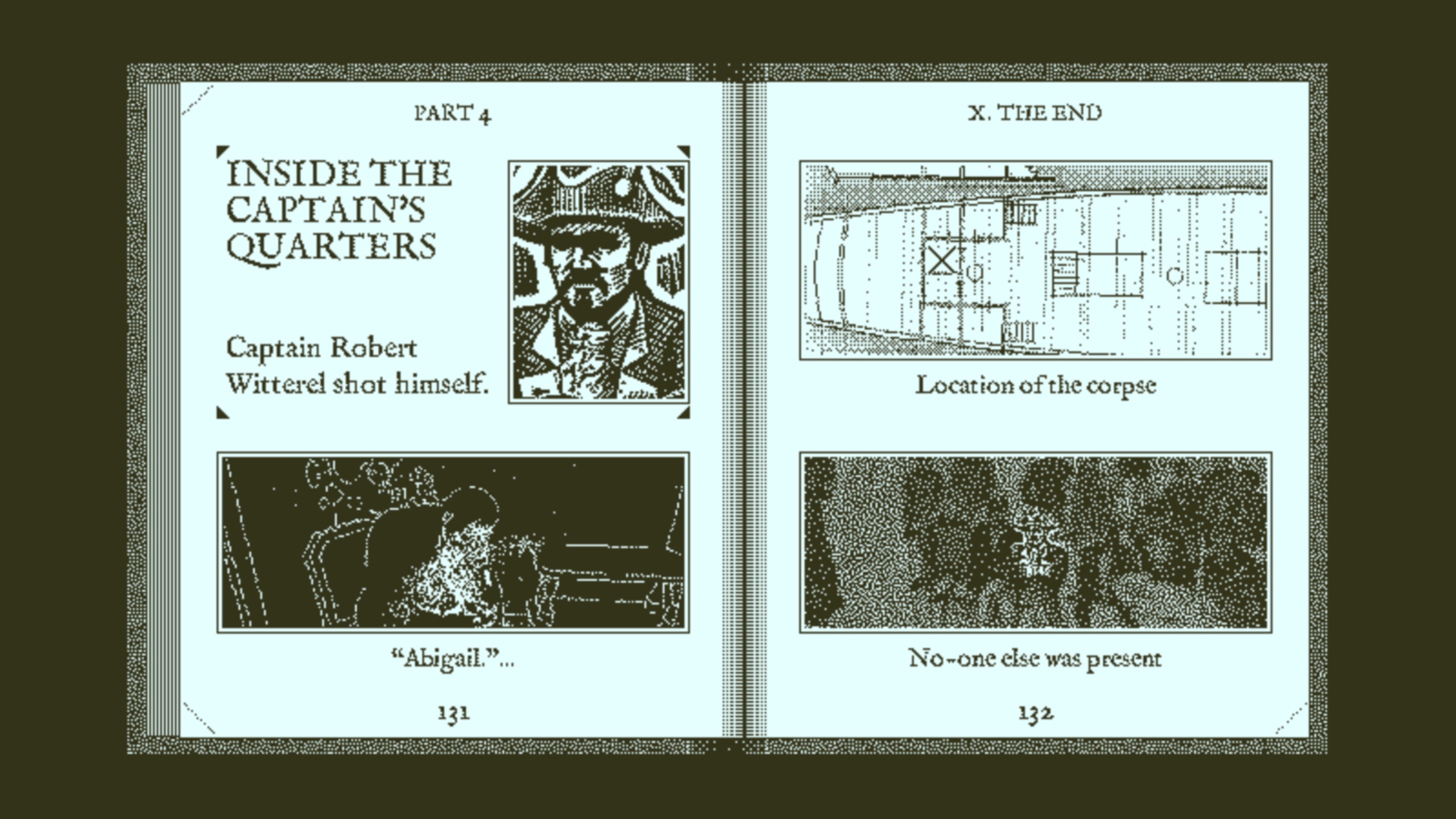 There are two rules to the watch. First, it lets you go into the past, but you can’t change anything, all you can do is look. And second, it won’t teleport you in the current time. So you can’t go into a scene and come out in a new location on the ship. “Otherwise the watch would be so powerful that it’s weird you’re solving some rinky-dink high seas murder when you could be ruling the world with it.”

By the same rules, the book has to be passive. It can’t invoke the watch’s power, just allow you to read stuff. “I didn’t want those two beams crossing.” But while it’s passive, the book is still pretty magic, a journal which binds together the mystery behind a doomed ship.