If you click on a link and make a purchase we may receive a small commission. Read our editorial policy.
This is The Mechanic, where Alex Wiltshire invites developers to discuss the difficult journeys they’ve taken to make their games. This time, Unity Of Command II [official site].

The first Unity Of Command was designed for the open steppes of the Eastern Front. There, the major battles were about manoeuvre, with tank units chasing and covering miles of ground for their objectives, and lines of infantry moving to counter and support. The steppes were perfect for UoC’s unique focus on maintaining your army’s supply lines.

So, when designer Tomislav Uzelac began thinking about turning to the Western front for its sequel, he knew he had a problem. The big battles of France and Italy were slow and attritional, crossing mountain ranges and facing enemies dug into forests. “The question was, how do you go from Case Blue, where you cover 1,000 kilometres in Russia over a month and half, to Monte Cassino, where you stay pounding on one position for six months?” he tells me.

The answer lay in pushing and pulling at the frontline between military accuracy and game abstraction, and in exploring tiny design details which you’d never think could lead to making a vast theatre of war this fun to play.

But as well as dealing with Europe’s topography, the sequel would also have to be a lot more complex than the first. “It was a much more technically complicated war than the Eastern front,” he says. The war here was heavily affected by intelligence and the Allies’ almost continual air superiority. There were amphibious landings and it involved armies from many different countries. ”Multidimensional. We needed more stuff.”

And so UoCII features more stuff. There’s fog of war, you can take prisoners, gain intel, perform beach landings and special attacks on enemy positions to weaken them, and your armies have HQs. But the thing about the original UoC, which was released in 2011, is that it’s a thoroughbred of a wargame.

Look, it’s at 45th on the Best Strategy Games on PC list, and Tim Stone describes it as ”high-calibre history-steeped hex entertainment”. Based on the same hex-based battle system as Panzer General, it features only as many systems as it needs to emulate its real-life battles and feel strategically deep. “When I look back I’m proud that I was disciplined and I cut out a lot of stuff and what remained was cohesive,” says Uzelac.

(A short aside: Uzelac was the original author of AMP, the pioneering MP3 player which became Winamp when it was ported to Windows. So he’s not only played a pivotal role in the evolution of war games, but also in the MP3!)

The result of that careful editing is a beautiful and highly readable UI which made UoC much more accessible than many of its wargaming peers. So, faced with adding all that stuff to the sequel, Uzelac says he had to ask himself another question. “How to present it in a reasonable package so the player wasn’t going to get scared away?”

The answer came with having army HQs as locations on the map. On the surface of it, it might seem odd to add another new feature to reduce clutter, but in fact, as well as a thematically important part of an army, Uzelac saw HQs as a way to present a menu for many of UoCII’s game systems.

Uzelac had set out with the intention of using HQs to present Force Pools. This system collects troops which have peeled away from units damaged in the field and which have made their way back to HQ as ‘stragglers’. Once there, they become part of your Force Pool, and you can use them to reinforce your units.

But soon enough, he realised HQs could do more. How about establishing an Engineering branch in them, which could hold UI for bridging building and repairing? These abilities were present in UoC but he’d nebulously categorised them as Theatre Assets, and so they didn’t have a very structured place in your armies.

And why not add more branches? Operations includes the Suppressive Fire action, which added a new way to deal with enemy units - bombarding them with artillery without going into a full attack - and No Retreat, which makes a unit hold its ground, no matter what assaults it.

”So we had Force Pools, Operations and Engineering, so suddenly the HQ could do three things,” Uzelac says. And then he realised something. “If you look at the general staff system, it’s exactly the way armies are organised into branches.” Though he was thinking about game UI and helping players get to grips with new systems, his HQs were following how army headquarters work in real life.

From this foundation, more ideas naturally slotted into the game without bogging it down in confusing detail. He added more Operations actions, such as Set-Piece Attacks (reduces the entrenchment of a dug-in enemy), and new branches: Intel allows you to take enemy stragglers prisoner and they’ll begin to reveal enemy positions, giving you sight into the fog of war. Logistics deals with resupplying units.

So HQs were about giving structure to the systemic complexity that the Western front demanded of UoCII. “Once you have some structure, you use what you have and try to get everything you need from a minimum number of components,” says Uzelac. “Because obviously, we don’t want to scare the player with 200 systems.”

And that clarity was further supported by a nuanced bit of interface design that you’d probably never think was so significant for the game’s development. “Once we figured it out, we were sold on the HQs,” Uzelac says.

When you select a unit and hover your mouse cursor over an adjacent enemy, you can scroll through the HQ actions it can perform with the mouse wheel. “It really speeds up your play and it became super fun,” says Uzelac. What’s more, the order of actions is always the same, so you can rely on your muscle memory to get to the same action each time.

Another related and vital but tiny UI detail you definitely won’t have thought about was the idea that HQ branches and actions would be positioned in the same places on the toolbar, regardless of the army’s nationality. You see, each army has its own upgrade tree, which grants access to actions. “But if you’re playing bunch of these armies at once, a British, Canadian, the Americans, the Free French, you can have four or five HQs, and it’s a pain to have every one be different. So the design constraint was that they always have to be aligned in the same order.” 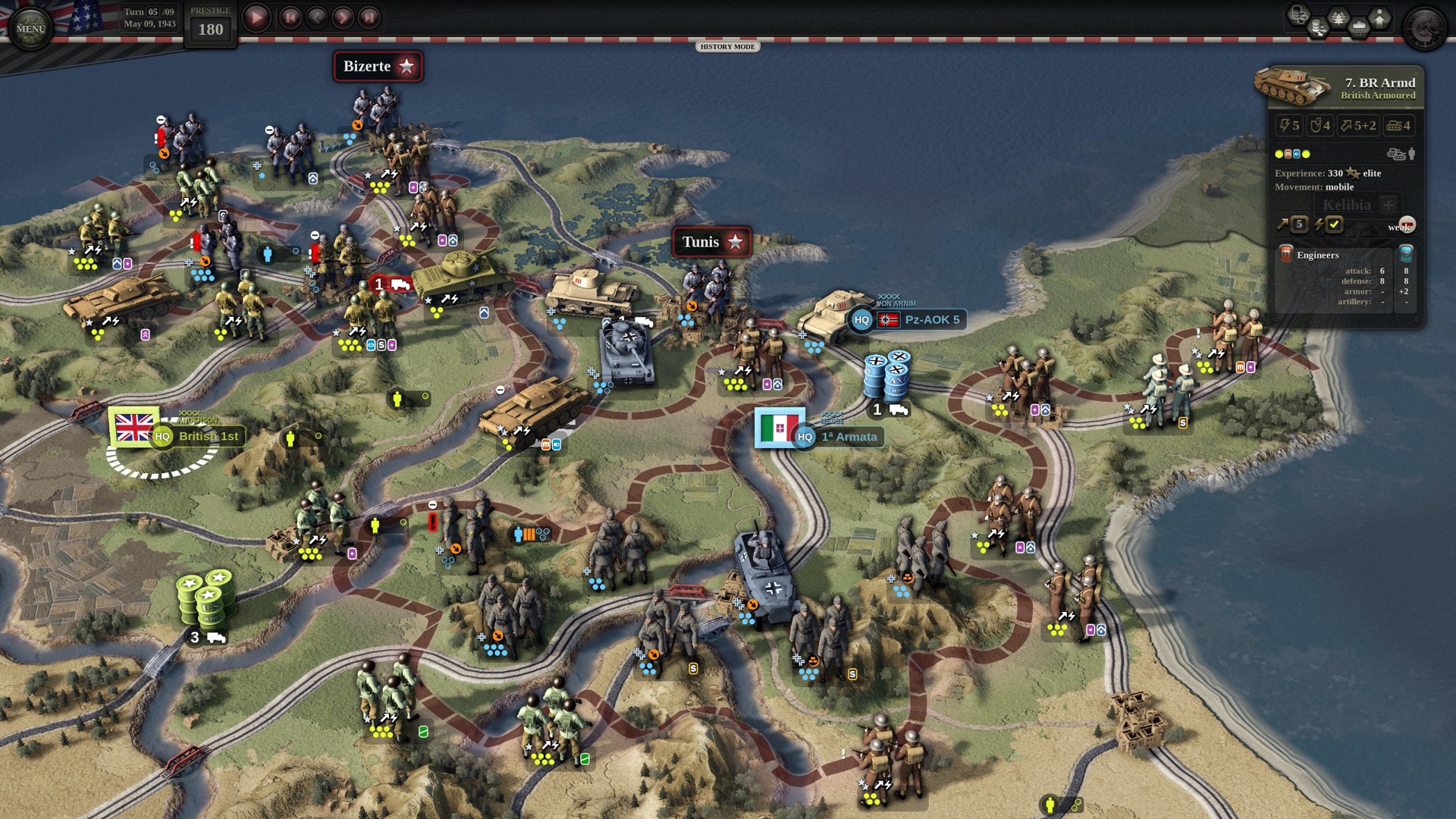 This constraint helped to standardise actions across all armies, further simplifying play. But the team was still able to grant each army its own flavour unlocking actions at different levels and having them cost varying amounts of Command Points to use. So the British Eighth’s expertise in engineering means it can do more bridge-building at level one, while the American First has cheaper artillery actions. “We decided that for the DLC, when you eventually play as the Germans, they will be allowed to have a different layout because they will be very different.”

UoCII constantly dances in the space between historical accuracy and abstract game design. The concept for HQs emerged from accuracy but they were used to solve a design problem, and that solution ended up pushing them towards accuracy. But for how HQs work on the battlefield, well, Uzelac had to put game design first.

As you might expect, units can only use HQ-based actions when they’re within range of their HQ. But since in UoCII you usually control several armies, this raised a conflict. “If you look at historical maps, there’s usually a precise line between two HQs, where the Americans are up to this line and the Brits are from this line,” explains Uzelac. “We tried that in the early prototypes, and it was completely unplayable.”

The question was about how to draw the line. Uzelac couldn’t tolerate the idea of making players draw it on the map, especially since they might need to redraw it every turn. And having the game do it automatically, with each HQ pushing on the other according to some formula, would inflict opaque and confusing restrictions on where players can position their units.

So instead, HQ spheres of influence overlap each other. It breaks with history, but as Uzelac says, “It kinda works. It’s still in your interests to keep your units together because your British units can’t use the HQ ability of an American HQ, but we’re not constraining you specifically. I’m pretty sure you could have a much more in-depth hardcore simulation where you’d really draw those lines, but that’s a different kind of audience and game for this level of historical fidelity.”

This, of course, wasn’t the only hard question HQs posed. What happens when you move an HQ? What happens if one is overrun by the enemy, or if it can’t access supplies? The answers had to bridge being comprehensible with flexibility, since the rules had to apply equally to small attritional maps and the wide-open ones of the later war.

“I can show the state diagram of this and it’s absurd. So OK, what should be the punishment if an HQ is out of supply? We had it that you couldn’t move. But that was too harsh, because you couldn’t escape.” In the final game, Uzelac made it so that your HQ can move when out of supply, but it loses a level of its Logistics actions and a level of a random other branch.

And how should an HQ be overrun by the enemy? After all, in reality, the headcount of an army’s headquarters is several times larger than its combat force. A single unit couldn’t really deal with one. But in the game, you can overrun one with a single unit, as long as it has three spare movement points.

“The HQ is an abstraction; really it represents the rear echelon of the army,” says Uzelac. As such, overrunning an HQ doesn’t destroy it, just removes some of its upgrades. “I specifically didn’t want to make the game about hunting HQs, because even after the worst defeats, like the Germans lost an entire army, the Sixth, in Russia, and they just reorganised it pretty quickly.”

Another area where Uzelac ditched authenticity in favour of clarity was air support, which was once going to be a big part of the game. “It’s all written down and designed, but we at some point realised it was five times more complex than the original.” Players would fight over control for airfields, which would have ranges of influence. “We went too far. It added a big cognitive workload for the player.” 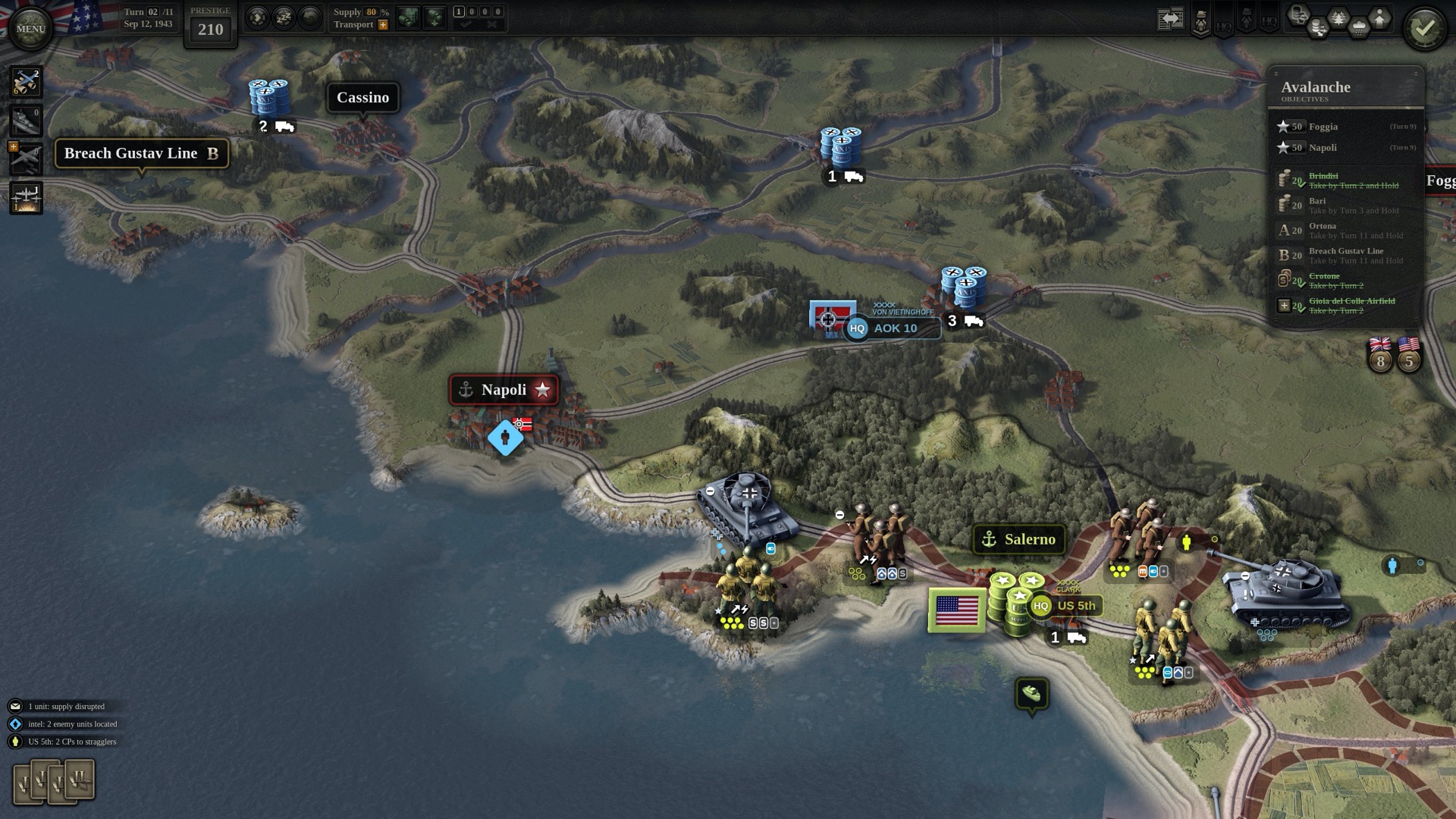 But aside from the wasted development time, that was OK. “It’s cool. We’re missing on some historical details, like the Allied fighter-bombers that were prowling the roads in Normandy and preventing German tanks from getting to the frontline. But there’s no game in there.” For most of the Western campaign, the Allies had overwhelming air superiority and the Germans had nothing to counter it, so it would lack the push and pull of a proper strategy system.

UoCII has a fascinating relationship with its historical inspiration, as it balances the ugly mess of real war with the beautiful simplicity of game war. Still, Uzelac wishes the first half of the campaign, the “endless slog” through Italy’s mountains, didn’t have to follow history so closely.

“The second half is much more free-flowing. Sometimes I wish we wouldn’t do historical games, because then I could really front-load the fun stuff. But this is how it was.”