How small is too small for a gaming keyboard? Personally, I think my lower limit stops at tenkeyless jobs like the Logitech G915 TKL or my current best gaming keyboard champion, the Fnatic miniStreak. Losing a keyboard's number pad has never been an issue for me, but I can't say the same thing about losing my beloved arrow keys, which is the main thing that gets the chop when you move down to a 60% keyboard like HyperX's limited edition Ducky One 2 Mini collaboration. That is one step too far in my books, at least if you're planning on using it as a work keyboard as well as for playing games.

As a pure gaming keyboard, there's a lot to like here. Measuring just 302x108x40mm (the same size as Ducky's existing One 2 Mini keyboard), its tiny proportions mean I can position both of my hands much closer together than a full-sized or tenkeyless keyboard, and it puts a lot less strain on my old mouse arm. I'm one of those people who's forever trying to inch their mouse mat as close to their keyboard as possible in order to make things comfortable, so it was a relief when I didn't have to go through my normal sizing up routine when I swapped out my Fnatic miniStreak for the HyperX x Ducky One 2 Mini.

HyperX's red switches provide all the speed and tactile feedback I need to play games with, too, and feel just as responsive and quick under the fingers as the Cherry MX switches you'll find on one of Ducky's regular One 2 Mini keyboards. Besides, when you're mainly focused on the WASD keys when you're playing a game, the need for those all-important arrow keys quickly fades away. 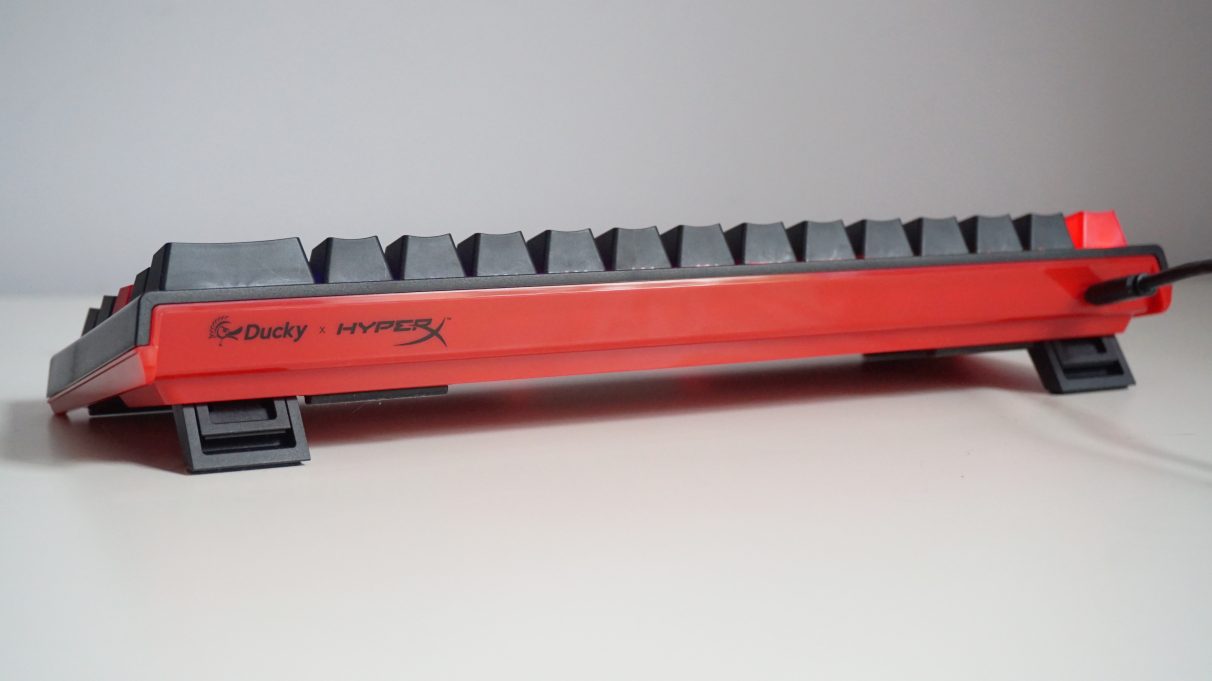 At least until you start typing, that is. I felt a pang of frustration every time I made a mistake with the HyperX x Ducky One 2 Mini, as I couldn't just hit the left arrow key a couple of times and instantly correct it. Instead, I had to re-train myself to either make greater use of the Delete key (which is painful when you only spot a typo mid-flow) or stop typing entirely and use my mouse to get back to the right spot. Perhaps I'm just lazy or have different typing habits to most, but I didn't relish this new, almost surgical approach to correcting my writing, and at one point I even considered having both keyboards plugged into my PC so I didn't have to put up with this missing arrow keys. After a few weeks with the HyperX x Ducky One 2 Mini on my desk, I did just about manage to reprogram my brain to cope without those precious arrow keys, but it's been incredibly hard to break decades old typing habits all the same.

I should say, of course, that the HyperX x Ducky One 2 Mini does technically have arrow keys built into it, but they're hidden away as secondary function keys. In fact, almost every key on the HyperX x Ducky One 2 Mini has a secondary function of some description, as the number keys all double up as Fn buttons, a chunk on the left are all assigned to various mouse options, and the lower row has brightness and volume controls attached to them. But you've still got to pause and put one hand on the Fn key in the lower right corner to take advantage of these extra hidden keys, and it all ends up being just as much hassle as moving your hand off over to your mouse.

As a result, the HyperX x Ducky One 2 Mini and other 60% keyboards like it fall into that increasingly large category of products that are absolutely fine and dandy for gaming, but not a lot else. Big screen gaming monitors that only have a resolution of 1920x1080 are another example that come to mind here, whose resolution is fine for games at 27in or above, but try and type up lots of long word documents on it and your eyes will hate you until the end of time. It's the niche within the niche, you could say, and in some ways the HyperX x Ducky One 2 Mini is almost the purest essence of what a "gaming keyboard" should be, in that it's built for games and games alone. 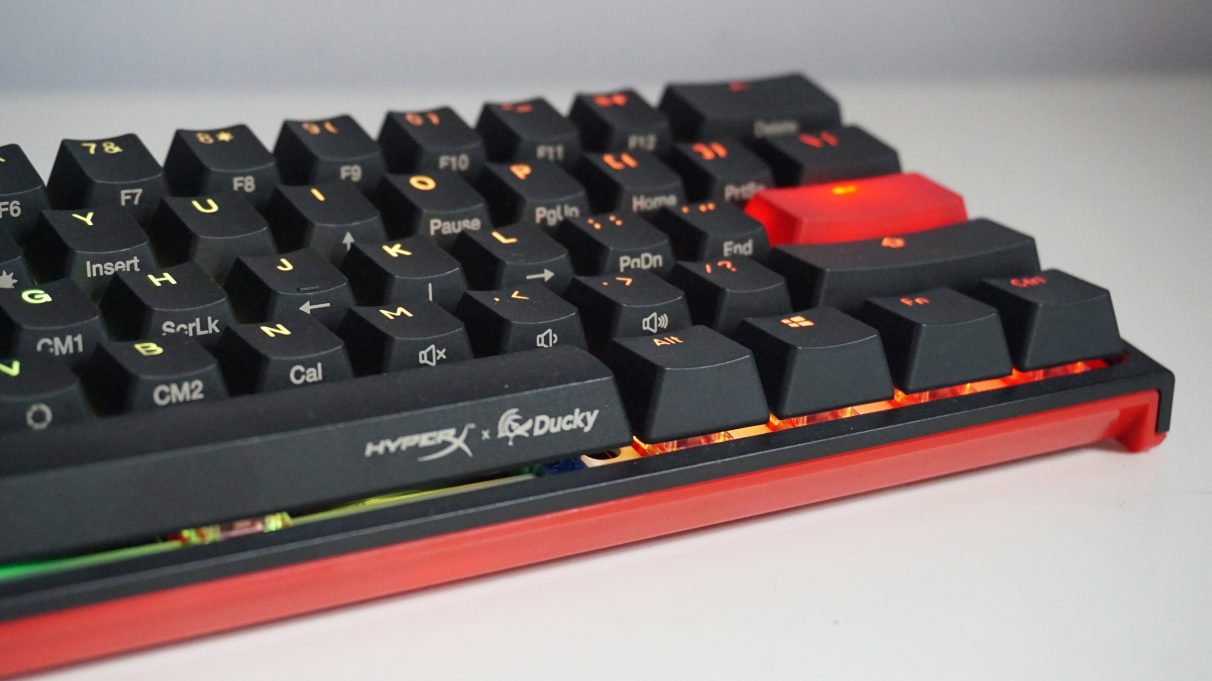 That won't be much use to anyone who also uses their PC for work, of course, and that's fine. There are other, equally responsive keyboards out there that do a much better job at pulling double duties, and you can read more about them in my best gaming keyboard roundup. If you are the type of person who only uses their PC for gaming, though, then a 60% keyboard may be worth considering if comfort is your top priority. As I said at the start, 60% keyboards like the HyperX x Ducky One 2 Mini do have a certain amount of charm during long gaming sessions, and it's likely we'll only start to see more of these specialist keyboards cropping up as the months go on.

Indeed, when I asked HyperX a little bit more about their limited edition keyboard collaboration with Ducky, they said that the demand for smaller form factors is increasing every year. "We’ve wanted to offer our HyperX community something special and exclusive," a HyperX spokesperson told me over email. "Ducky is a very well-known keyboard brand with high-quality products, especially for smaller form factor keyboards. By having a collaboration between Ducky and HyperX we can combine great features and deliver our audience something special. HyperX Red linear switches integrated with the Ducky One 2 Mini keyboard casing felt like a natural, yet innovative, fit."

Alas, the keyboard itself sold out almost instantly when HyperX first announced it last month, so it's no longer available to buy or order anymore, but the positive reaction from both the HyperX and Ducky fan communities "has met our expectations", according to HyperX. "This collaboration has been a great opportunity for us to expand our keyboard market and we will continue to monitor demand while we endeavour to bring gamers high-quality peripherals." 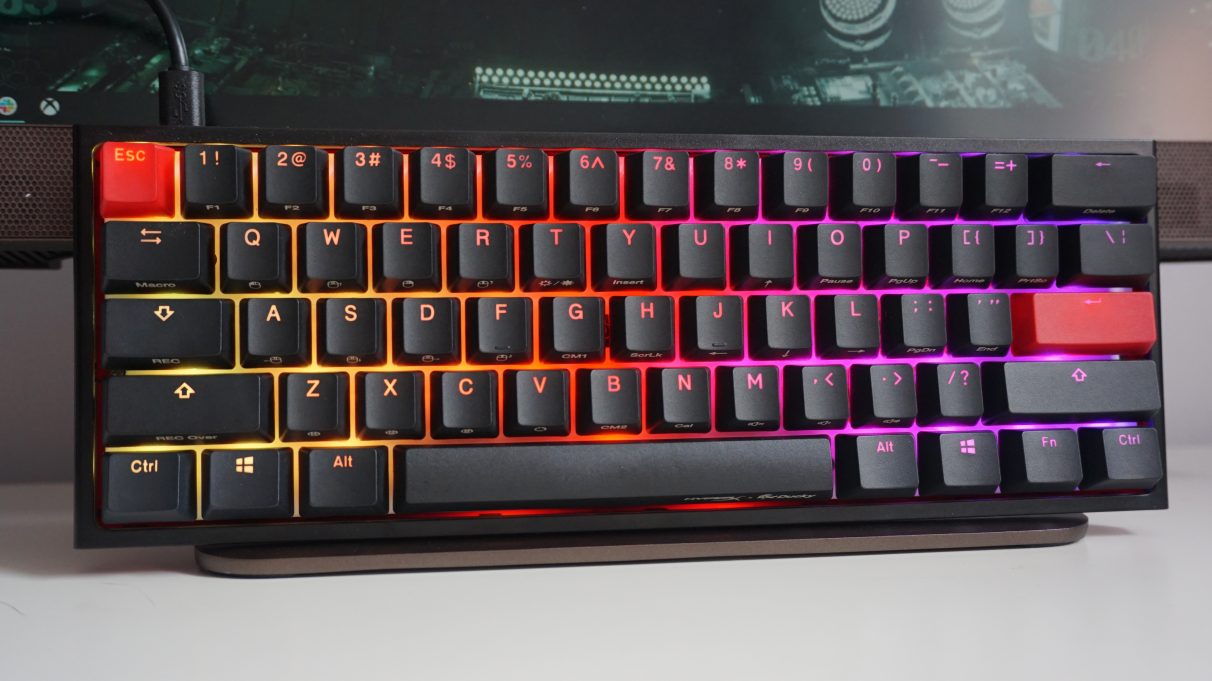 HyperX wouldn't be drawn on whether we'll see more collaborations with Ducky in the future, but when I asked them about why they decided to make it a special edition rather than a mass market model, they said that "we each wanted to reflect the special nature of this partnership by making the product limited edition and unique. It felt like this would be a welcome and memorable way to mark the collaboration for both HyperX and Ducky fans." They also revealed that "conversations between HyperX and Ducky have been going on for the past year," so it will probably be some time before we see another joint venture between the two peripherals makers, if at all.

Still, while the HyperX x Ducky One 2 Mini may be a one-time-only deal, Ducky's regular One 2 Mini keyboards are much more widely available if even the shrunken dimensions of a tenkeyless keyboard have proven to be too bulky for you. They're not cheap, with models starting at £120 in the UK and $100 in the US, but they do come in a variety of Cherry MX switches and a wide range of colourful chassis. As for me, I'll be sticking with my Fnatic miniStreak for the time being, as I just can't say no to those all-important arrow keys.