I was a big fan of the Ducky One 2 keyboard when I had it in for testing last year, but its Cherry MX switches did mean it felt quite a lot like every other mechanical keyboard out there. The good news is that Ducky have teamed up with HyperX to make a new limited edition version of their 60% One 2 Mini keyboard, which will have HyperX's red linear switches sitting underneath Ducky's double-shot keycaps.

The bad news is that only 3700 HyperX x Ducky One 2 Mini keyboards are being produced for this limited edition run, and they've already sold-out on HyperX's online shop. Still, here's hoping that this will be the start of more HyperX and Ducky collaborations, as I'd love to see bigger, full-sized keyboards with this combination of parts as well.

For the 3700 people who were lucky enough to bag one, each keyboard comes with a laser marked edition number on the base of the keyboard, as well as additional coloured keycaps, a Ducky keycap puller to swap in said keycaps, and one of Ducky's Year of the Rat spacebars. Each keyboard also has a fetching red and black chassis with three levels of height adjustment.

Why 60% instead of full-sized? According to HyperX, there's been a lot of demand for them to make something a bit smaller than their current line-up of keyboards, such as their excellent HyperX Alloy Core RGB (which is part of our RPS Rig build), and their equally good Kailh-based HyperX Alloy FPS RGB keyboard, so they turned to Ducky to help bring it to fruition. 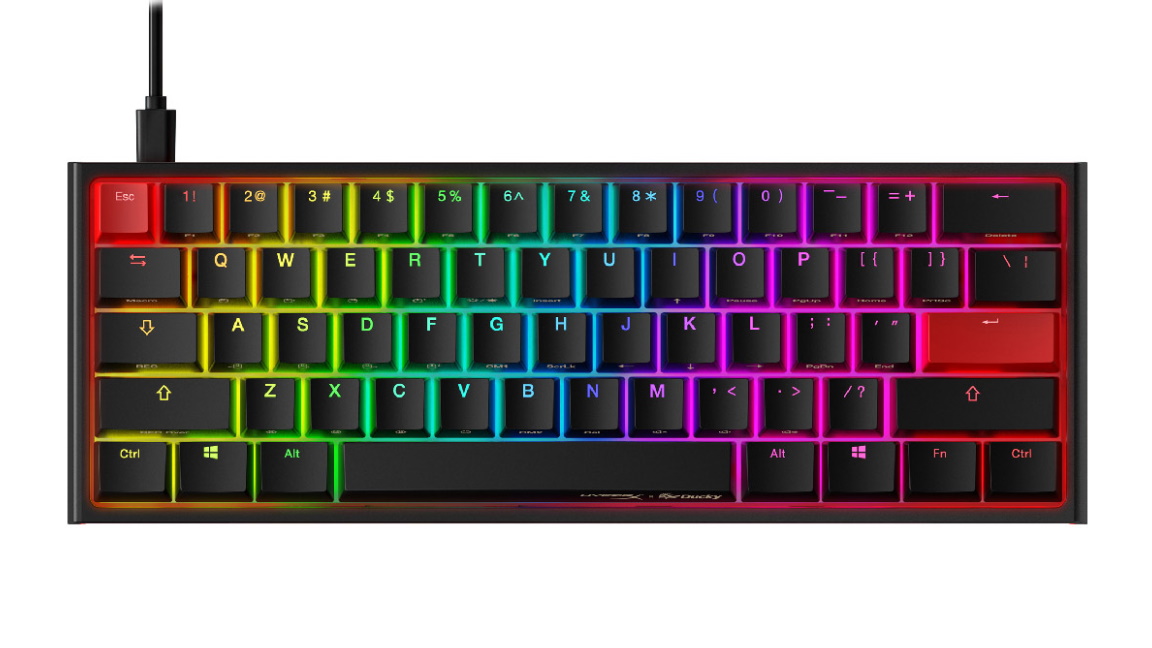 “We are excited to announce our limited-edition keyboard collaboration with Ducky, known for their high-quality and performance-oriented mechanical keyboards in the gaming market,” HyperX's EMEA business manager Bianca Walters said in a statement. “The HyperX x Ducky One 2 Mini is a great addition to the HyperX keyboard line-up and provides HyperX and Ducky fans with a 60% form factor mechanical gaming keyboard utilizing HyperX switches”.

HyperX's switches are a bit different to your classic Cherry Reds. They're still linear, up and down jobs for super fast keystrokes, but they have a slightly shorter actuation point, which is the distance you need to press it down before the keyboard is able to register it. Whereas Cherry Reds need to be pressed down a full 2mm, HyperX Reds come in at a mere 1.8mm. They also have a shorter overall travel distance of 3.8mm compared to 4mm, and they're rated for 80 million keystrokes as opposed to "just" 50 million. Finally, HyperX's exposed LED design means their RGB lighting is brighter and can bleed out from underneath the keycaps with greater luminosity if that's your kind of bag.

Whether you'll be able to notice all that in the grand scheme of things is up for debate, but obviously the main draw is that teeny tiny chassis. Indeed, one of the big reasons why I love Fnatic's miniStreak so much is due to its compact size. That keyboard, though, is only a tenkeyless one, which effectively lobs off the number pad you'll find on full-sized ones. The HyperX x Ducky One 2 Mini, on the other hand, is a 60% keyboard, which also ditches the arrow keys, any extra rows of Fn keys and that small cluster of Home, Insert and Pg Up and Pg Down keys you still find on tenkeyless ones. Sure, chopping all of these off only leaves you with the bare essentials, but it does mean you've got a lot more room to move your mouse around your mouse mat, and it should also be more comfortable for extended gaming sessions as you don't have to keep your hands so far apart on your desk.

You'll still be able to program and record your own macros on its as well thanks to Ducky's 2.0 Macro support, and you don't even need to download any software to do it, either. The same goes for configuring its RGB lighting, as you can change the brightness, speed and colour with simple key commands, which are all squeezed onto the front of Ducky's PBT double-shot seamless keycaps, a bit like Fujitsu's Realforce R2 keyboard. Plus, it comes with a detachable USB-C cable, which means it will be easy to replace if a rogue pet decides to chow down on it when you're not looking.

As mentioned earlier, this particular model has sadly already been gobbled up faster than a slice of bread in an actual duck pond, but if HyperX's "keep an eye out for future collaborations" tease on their website is anything to go by, I'll bet this isn't the last Ducky x HyperX keyboard we'll see going forward.