If you click on a link and make a purchase we may receive a small commission. Read our editorial policy.
The Witcher 3: Wild Hunt is five years old today! Can you believe it? We're celebrating it with The Witcher 3 Anniversary tag today. Happy birthday Geralt, you big hairy baby!

I'm one of those people.

I love the idea of The Witcher 3. I enjoy playing the game, even. But I seem to be cursed. Every year or so I sit down to play it, full of resolve to see it through to the end. But every damn time, despite finding myself increasingly drawn in to its meticulously crafted fantasy world, and despite revelling in my role as a sort of ultra-violent Hagrid within it, I only ever manage a handful of hours before getting distracted and drifting away from the game. By the time I've got the urge to come back again, I've forgotten what was going on. And so I start again, like a gaming Sisyphus forever pushing a grumpy mutant up a hill.

I've played the start of The Witcher 3 five times now. And so, to commemorate its fifth anniversary and my impending, inevitable sixth attempt at playing it, I've decided to see how much of the game I can remember and synopsise here, without cheating and googling anything. I'm going to try and do this in one take, so I can't second guess myself, and I've even done some illustrations, to help with your immersion in the tale. So, are you prepared? Let's go!

The plot of The Witcher 3, explained

Anyway, he's then hauled out of the shag zone by an even more miserable, even older Witcher, who forces him to race a child through an obstacle course.

The race does not finish, however, because a massive flying pirate ship appears in the sky, and beside it there are a load of guys who look like the Lich King off of Warcraft, doing wheelies on their horses in mid air. These fellows are the Wild Hunt, and they are in the game's title. Here's the main idiot of the Wild Hunt: 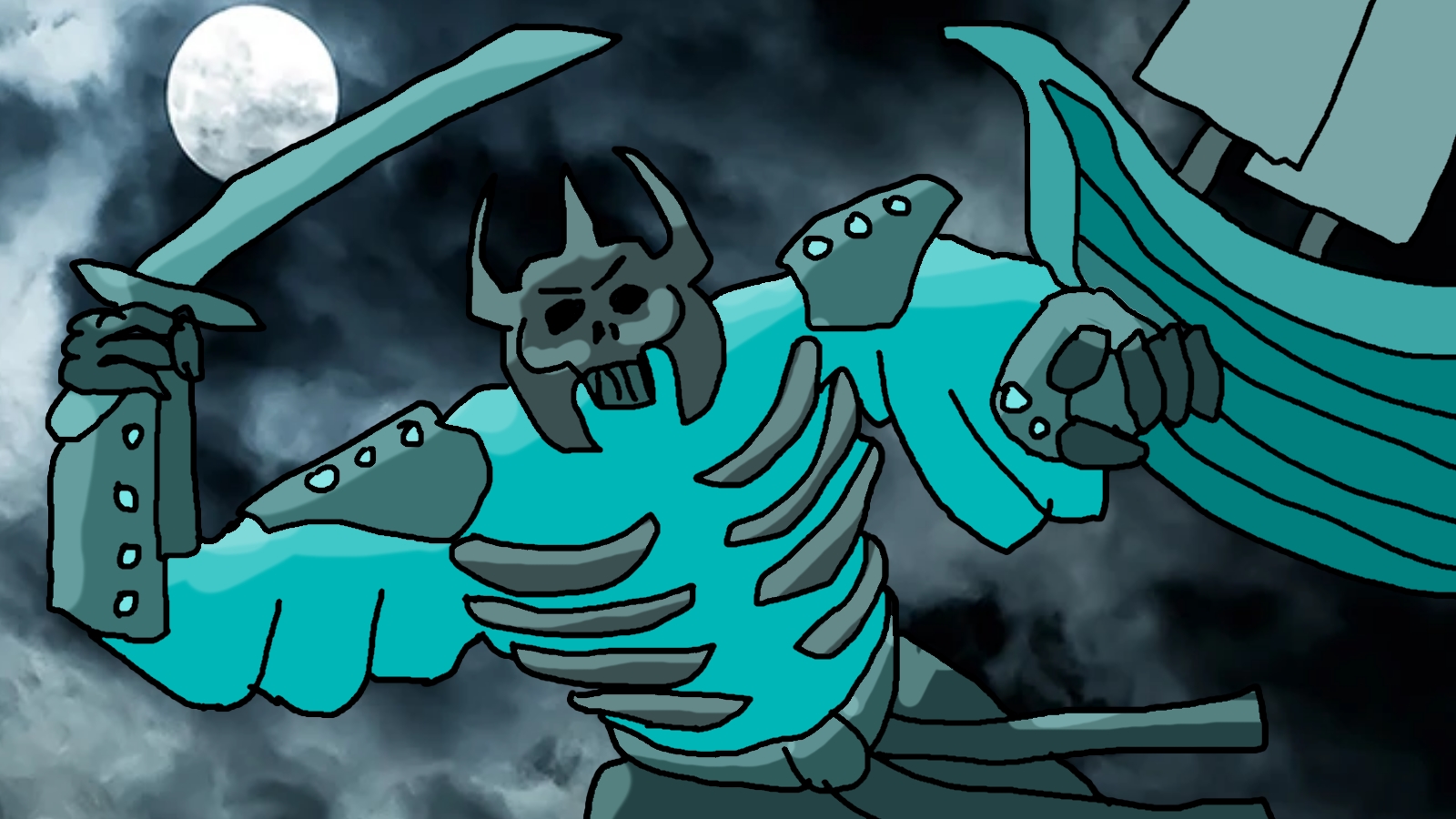 Anyway, the Lich Kings steal the child, and Gerald is very pissed off. So he begins an adventure. There's a really good cutscene of Gerald absolutely caning it across the landscape on his horse, spliced with shots of his wizard girlfriend on a big mad battlefield. I'm confused by this in retrospect because I thought she had just been with him when he had his sexy bath, but perhaps we've jumped elsewhere in time and now she has done a runner? Anyway, Gerald is very anxious to find her (and presumably the child the Wild Hunt nicked?), so he properly Aragorns the site of the battle, sniffing at footprints and stuff until his special Witcher Vision shows him a clue. I think his wolf jewellery glows yellow when he uses his powers.

This is Gerald's horse by the way: 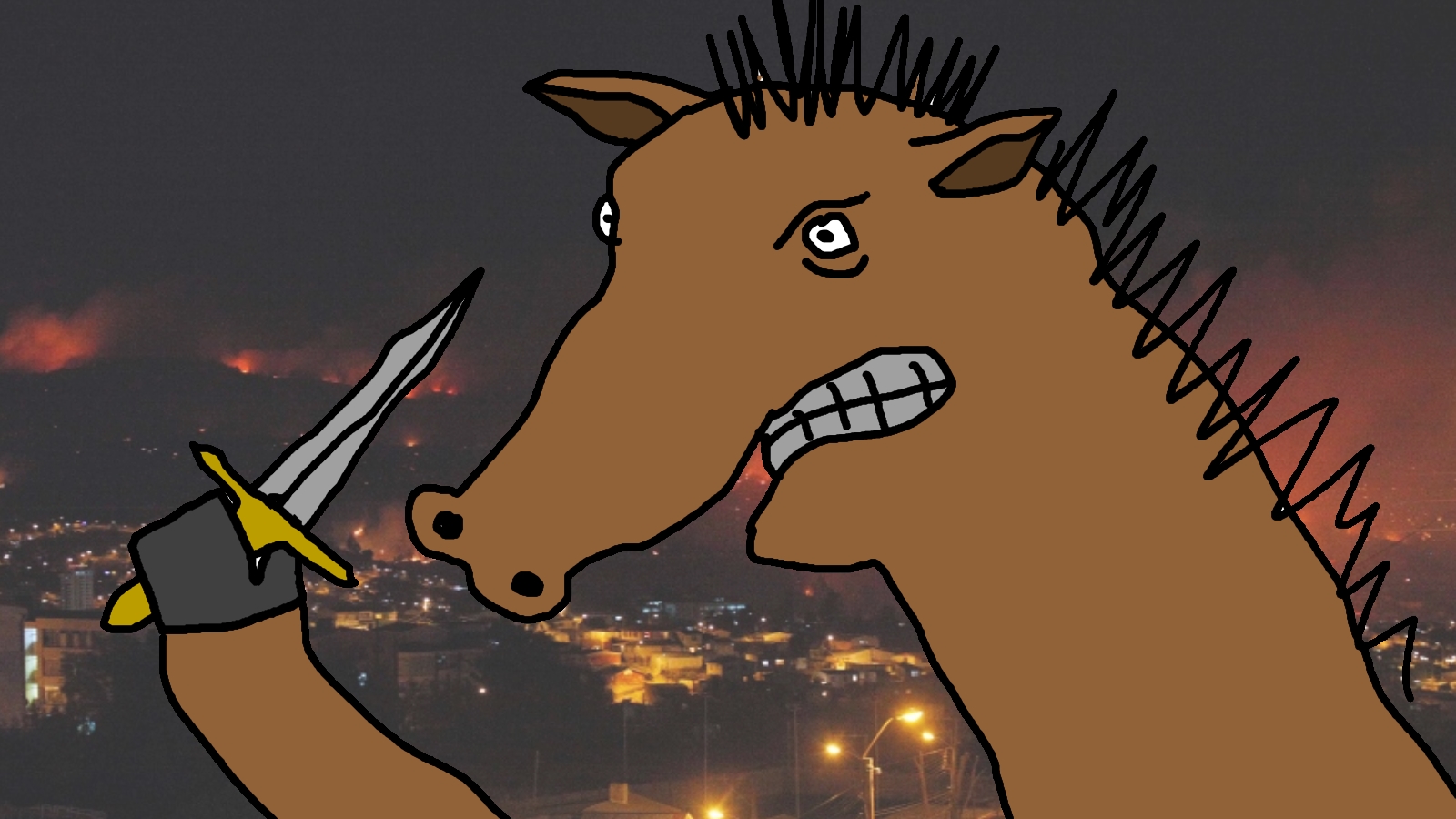 Gerald's instincts lead him to a town, which is in the middle of a war. He asks some people in a pub about his girlfriend, but they are meatheads and are bigoted to him, and so he has to sword them all up instead. But at least he learns to play a collectible card game. There are ghouls hanging around on the outskirts of town, because they love the corpses from off of the war, and there are frog dudes in the water who try to strangle Gerald because they are angry at having drowned and want to see how he likes it for a change. A dwarf calls Gerald a c*nt.

Then he's sent out into the countryside to have a chat with an army man. The army man won't help Gerald until he beasts a griffin that has been eating all the businessmen who try to come to the town, so Gerald gathers together loads of herbs and spices to brew up poisons and that. I know this sounds crazy, but I am almost certain Gerald acquires an actual gun. Gerald waits by an old windmill for the Griffin to show up, and it's worth the wait because it's an utterly sick bit of creature design. Gerald doesn't care though, he just shoots it right in the ticker with his Witcher Gun: 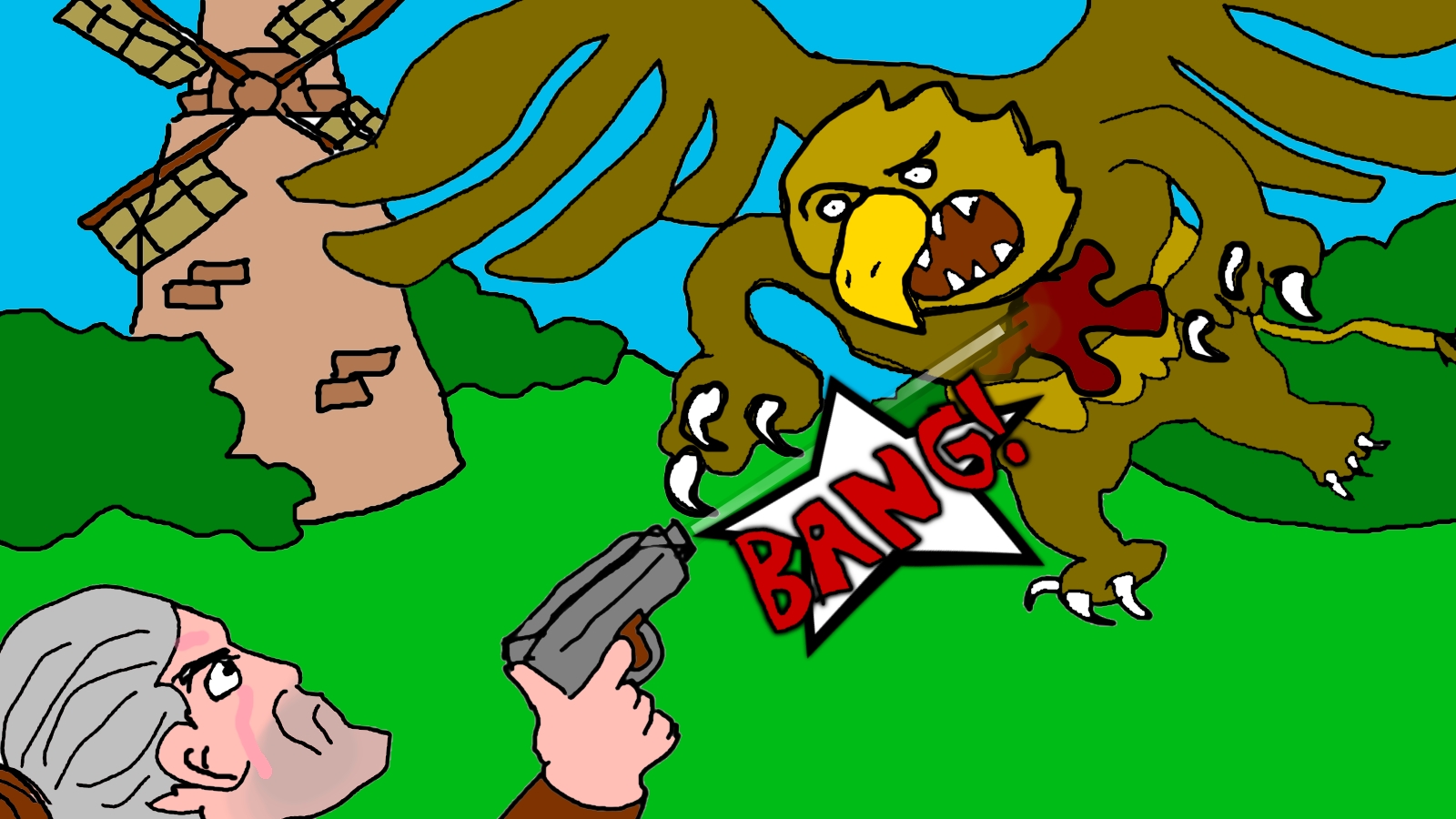 Well, after that things get a bit hazy. I think there's a cool old woman you visit to get more herbs and stuff, and she's got a long laundry list of local monsters for you to do in. One of them is some sort of turbo ghost who lives in a well and then comes out of it, all on fire, to absolutely dismantle people. Gerald beats it up, but then feels a bit bad about it because I think it was a girl whose husband strangled her when they were meant to be getting married or something, and then chucked her in the well. Anyway, Gerald's not a bad sort because she's been able to rest at last.

I think the Wild Hunt men show up in their big ship again, and one of them points at Gerald. They both get very cross. And that, I am afraid, is all that I really remember. Alice Bee told me earlier she's fairly sure the Wild Hunt don't have a pirate ship, and I have since remembered that the last time I played The Witcher 3 I was on a massive dose of painkillers because my knee was a disaster, but I'm still certain there was a big flying pirate ship. I guess I'll have to go back once again and find out. In the meantime though, I hope I've impressed you with my powers of recall.

(Disclaimer for Witcher superfans: I am not dissing the game. It is very good, from what I've experienced.)