"So how are you doing, Matt?" asks Brendy (RPS in peace). We're foraging together, well out of earshot from the other survivors. "I mean outside the game", he says. "How's your shoulder? Is your collarbone healing OK?". It's been a while since we chatted, and I genuinely appreciate his concern. It's a nice moment. I tell him I'm doing just fine, while simultaneously raising my sickle.

"Feels a bit weird to do this now, though" I said, as I brought it down on him.

Project Winter is a survival game about escaping a frozen wilderness, except really it's about luring your friends into the wilderness so you can murder them. We played it nonstop for most of last weekend, and I have rarely laughed so hard at a videogame.

Up to eight players start off in a central lodge. There is warmth, there, along with a couple of crafting stations for food and gadgets. The ultimate goal for most players is to find a helicopter pad, repair it, and escape. The goal for two of the players is to kill everyone before that happens.

You have to be sneaky about it. There are traitor-only weapon caches dotted around, but they make a loud noise when you open them, and even once you're kitted out you still need to be careful. It's easy to get overwhelmed by a crowd. Fortunately, everything is structured around opportunities to thin out the herd.

Take the events, for instance. A blizzard might roll in, forcing everyone to dash for shelter. Or you might get teleported to a random corner of the map, cut off from the group, easy pickings for wolves or opportunistic traitors. Or you might all get turned into rabbits. 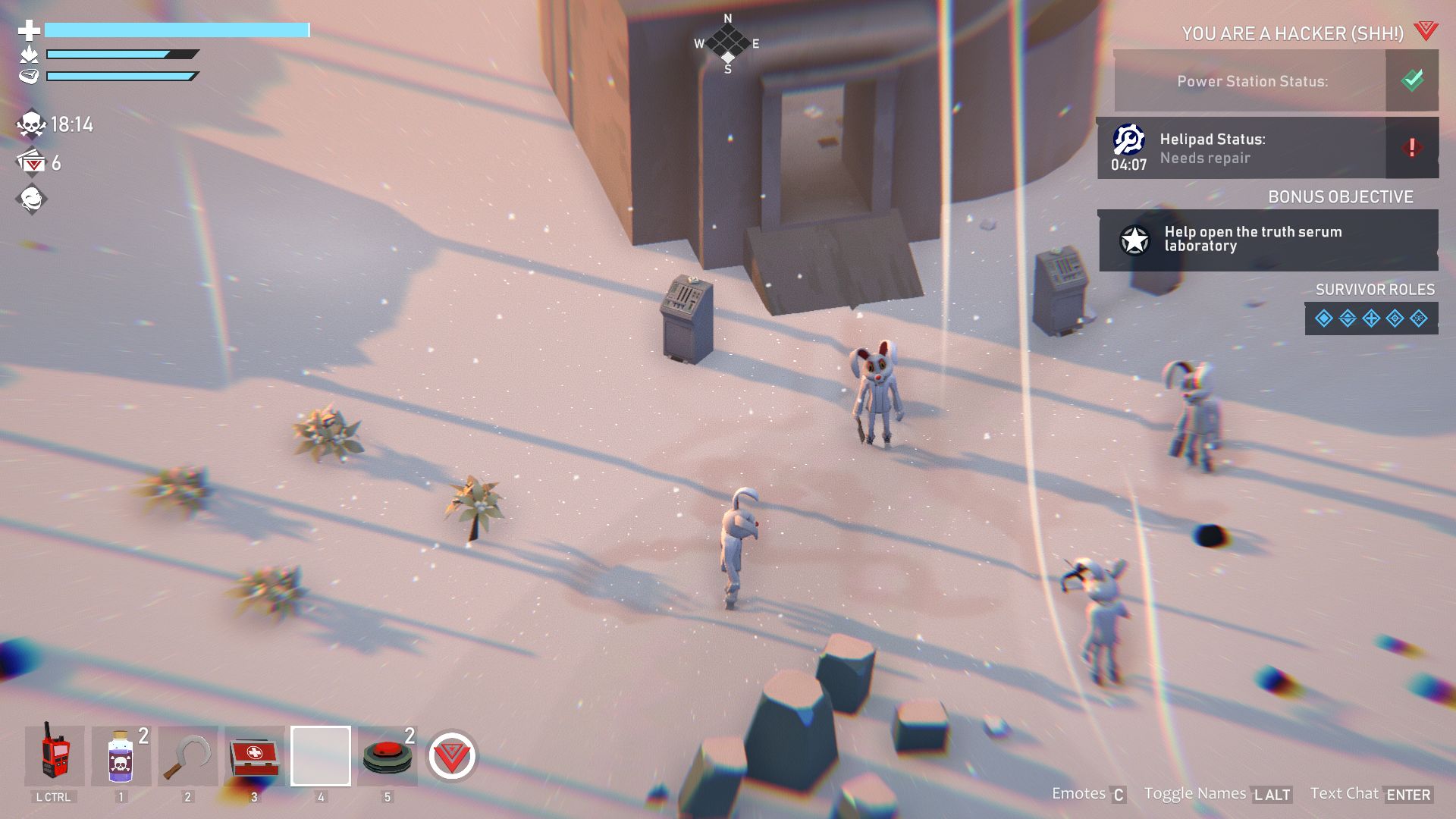 That's the best one. For a minute or two, everyone becomes unrecognisable. You can still talk, but a silent bunny is an unidentified bunny. When one bunnying hit, a group of us were out searching for bunkers you can only unlock if three people active switches at the same time. I was a traitor, and came within one blow (I was later told) of doing in my friend Dan. He managed to wriggle free, though, screaming for help as he ran back to the lodge. With everyone else alerted, it was my turn to leg it, stumbling desperately through the snow as they yelled and pursued me.

It was electric. They followed my tracks, hot on my heels, with seconds left of bunnynimity. I gave them the slip by ducking into a hut, then coyly walked back into the lodge and feigned ignorance. Have you every tried to reintegrate into society just after you've failed to do a murder? I cannot recommend it enough. 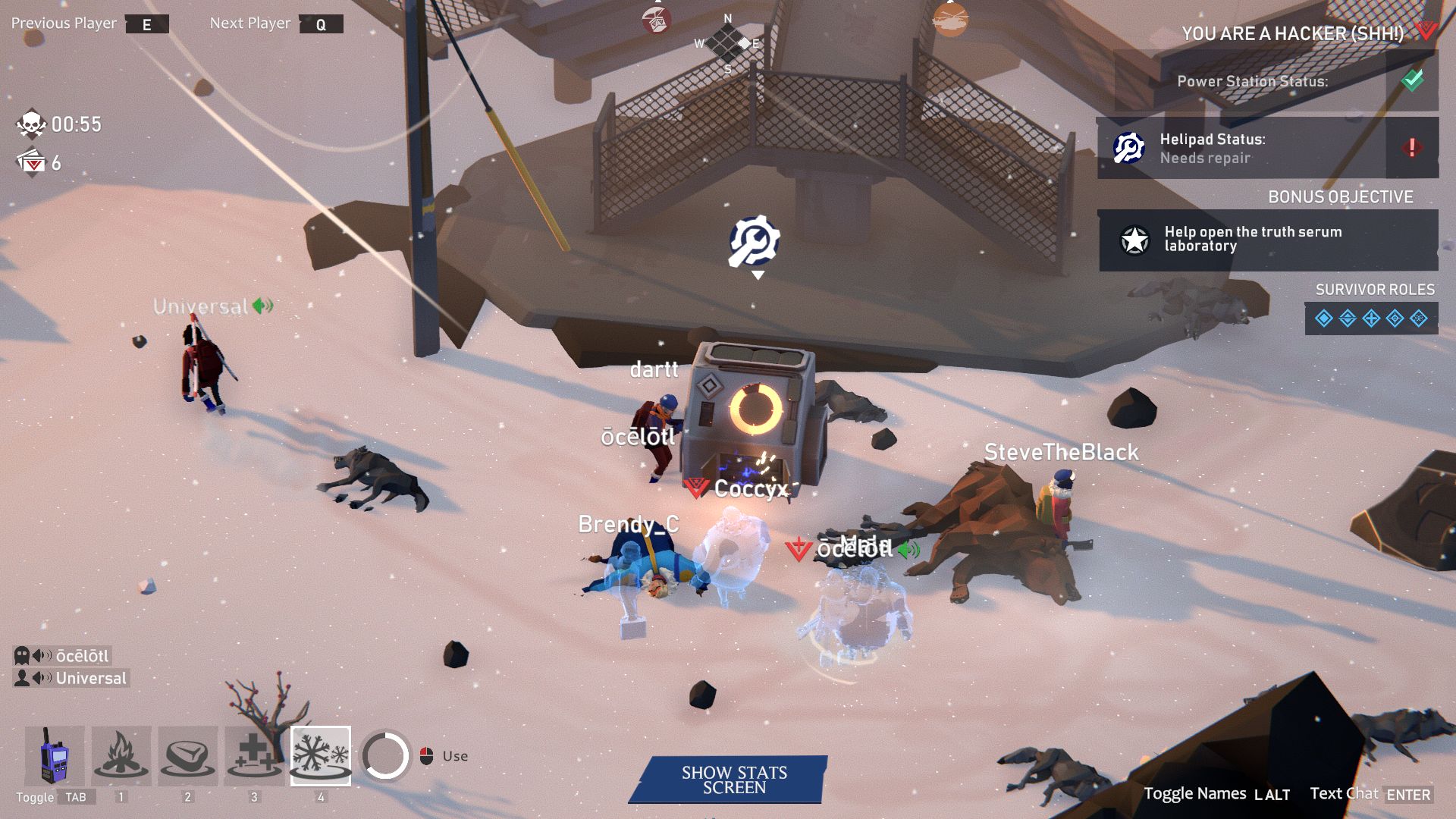 It's even better when you've done a successful murder, because then you know their ghost is watching you. Player elimination normally sucks, but here that's ameliorated by the way dead people get to watch a live, improvised movie where their friends dick each other over. One game came down to just me and my pal Steve, preparing to repair the helipad. Exactly what you need to do varies, and this time one of us needed to hold down a button while the other fended off wild animals. We were surrounded by the invisible ghosts of everyone I'd murdered beforehand, urging Steve not to turn his back. Which he then did, of course, moments before I stabbed it.

I love board games with hidden roles, and this is by far the best use of them I've seen in a videogame. You can't see people's expressions, but that's more than made up for by the way you have to act. You've got to slink around, hiding corpses, fretting about how far noise travels. Your traitorous plans can come crashing down if you don't realise two players are in radio contact, while your attempts at do-gooding come undone if you trust the wrong person. It drips drama. 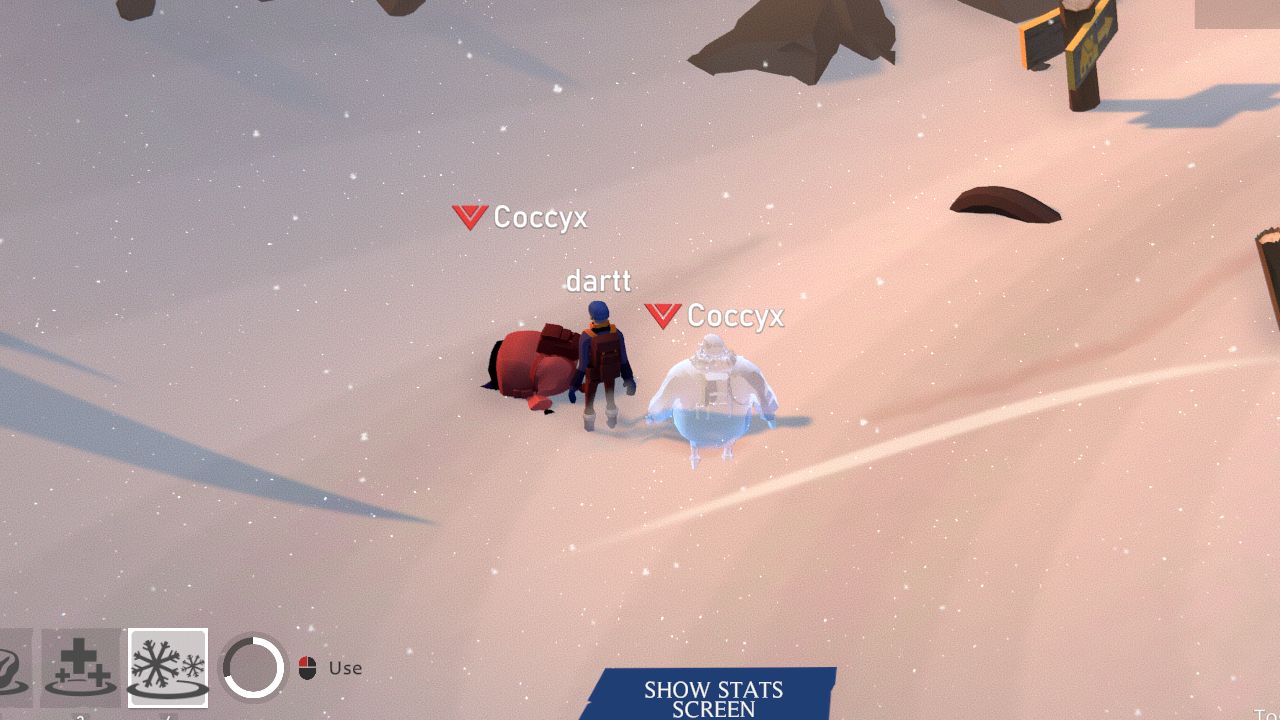 It's also very, very hard for the survivors. We've only managed to escape once, and that was when both traitors got themselves eaten by bears. I'm confident we can escape without ursine-assistance next weekend, though. Lord knows we'll play enough of it.