I am big into weird stuff. My tastes lean towards being surprised over being moved, and my favourite games and films and books reflect that. Give me wild fantastical sci-fi first, interesting character arcs second.

So far Death Stranding has given me a very quiet yet very grumpy man while frontloading some of the most delightful nonsense I've seen in videogames. I am here for it. I will take all the canister babies Hideo Kojima and his team can throw at me.

I can see why everyone had such a hard time writing about Death Stranding. I would also like to briefly complain that this is the worst possible time and perspective from which to write about Death Stranding, because many of you will have played the whole thing on consoles already, and so will already have much more informed and considered opinions than mine. The discourse has been done and it went on for bloody ages.

There's also the way I've only played two Metal Gear games, and I skipped most of the cutscenes in both. Up 'til now Kojima Productions' brand of surreal gritty horror has left little impact on me beyond a vague sentiment resembling 'huh, that was messy but kind of cool'. Death Stranding's intro grabbed me when I wasn't expecting it to, is what I'm saying. 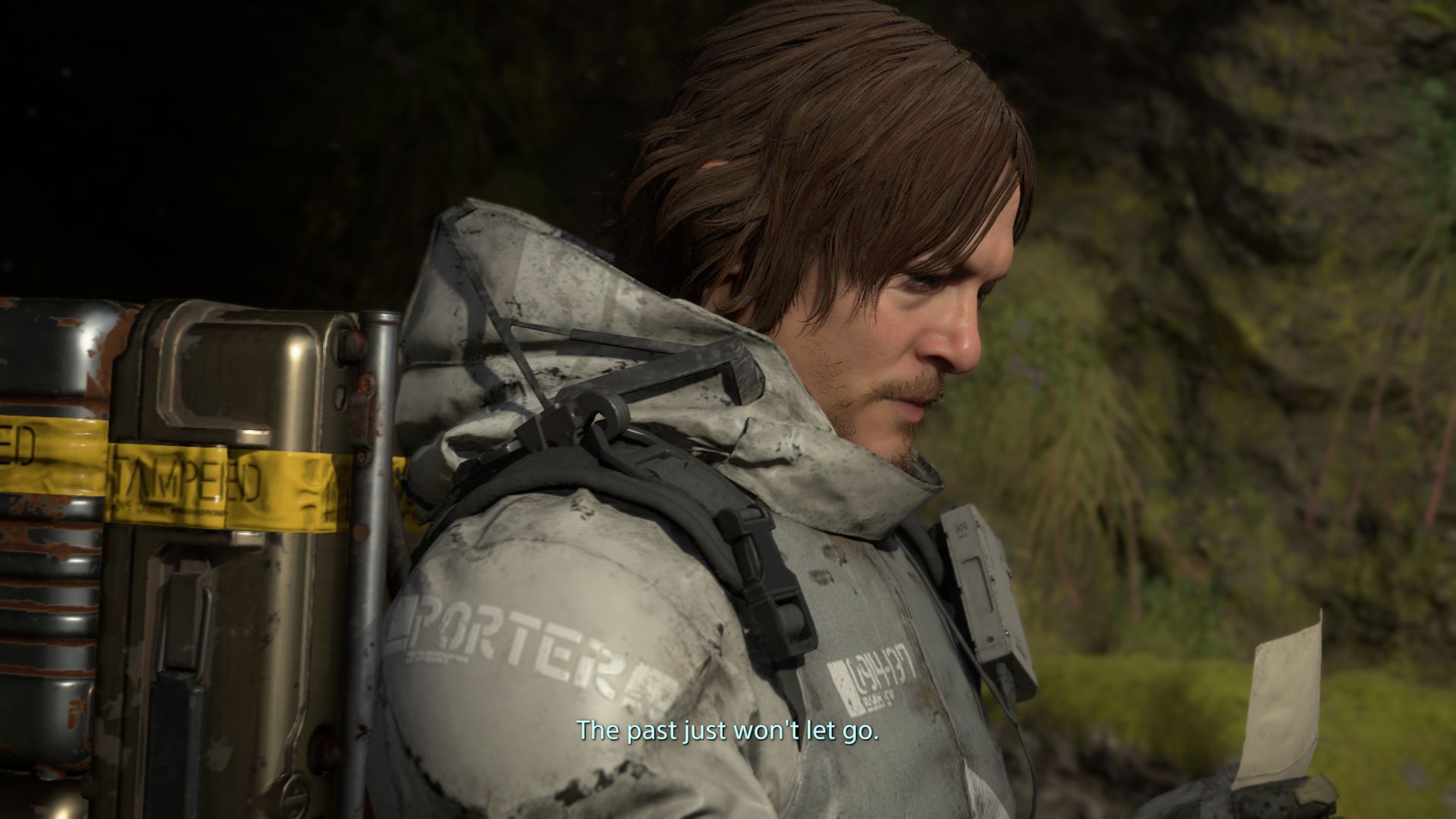 I paid enough attention to The Phantom Pain to have an inkling that most of what I'm about to say applies to every game Hideo Kojima has been involved with. I also suspect this is an escalation.

It's great, it's wild, but it's also frustrating. I am entirely unsure how seriously I am supposed to take all this, all the sunglasses named after the Kojima productions mascot and the Monster Energy product placement, while being equally sure that this is maybe part of the point. That suspicion graduated into certainty when (just as I was absorbing the opening cutscene and posing that exact question to myself) the lyrics "don’t be so serious" popped into my ears. They're part of a very good song that plays as Sam Porter Bridges rides around the post-apocalyptic wilderness of ex-America.

It knows it's doing a juxtaposition, and it knows that it doesn't strictly need to be subtle about it. Again, this is maybe part of the point. 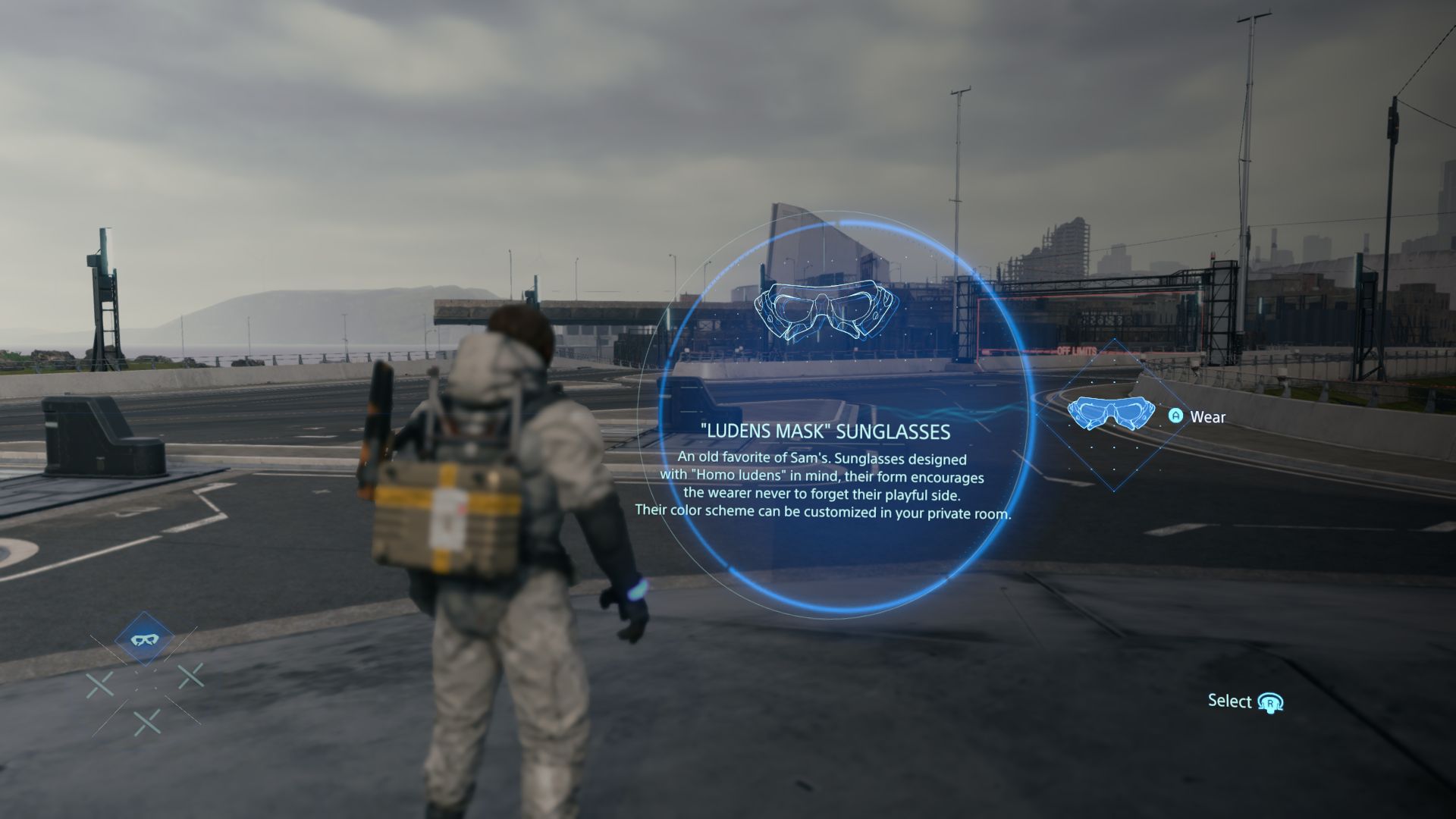 I think that sort of sentiment only takes you so far, though. My point is that part of me would rather it stopped being so goddamn indulgent, just briefly, please, in-between the rhyming couplets about the big bang that created life and the big bang that created death-life. I find myself rolling my eyes most vigorously at Death Stranding when it is nakedly aspiring to be poetic.

It's walking a tightrope between comedy and horror, and there are times when both parts undermine the other. There is so much death and suffering that I AM supposed to take seriously, and so much frivolity that I am not. It is extremely Season 3 of Stranger Things. 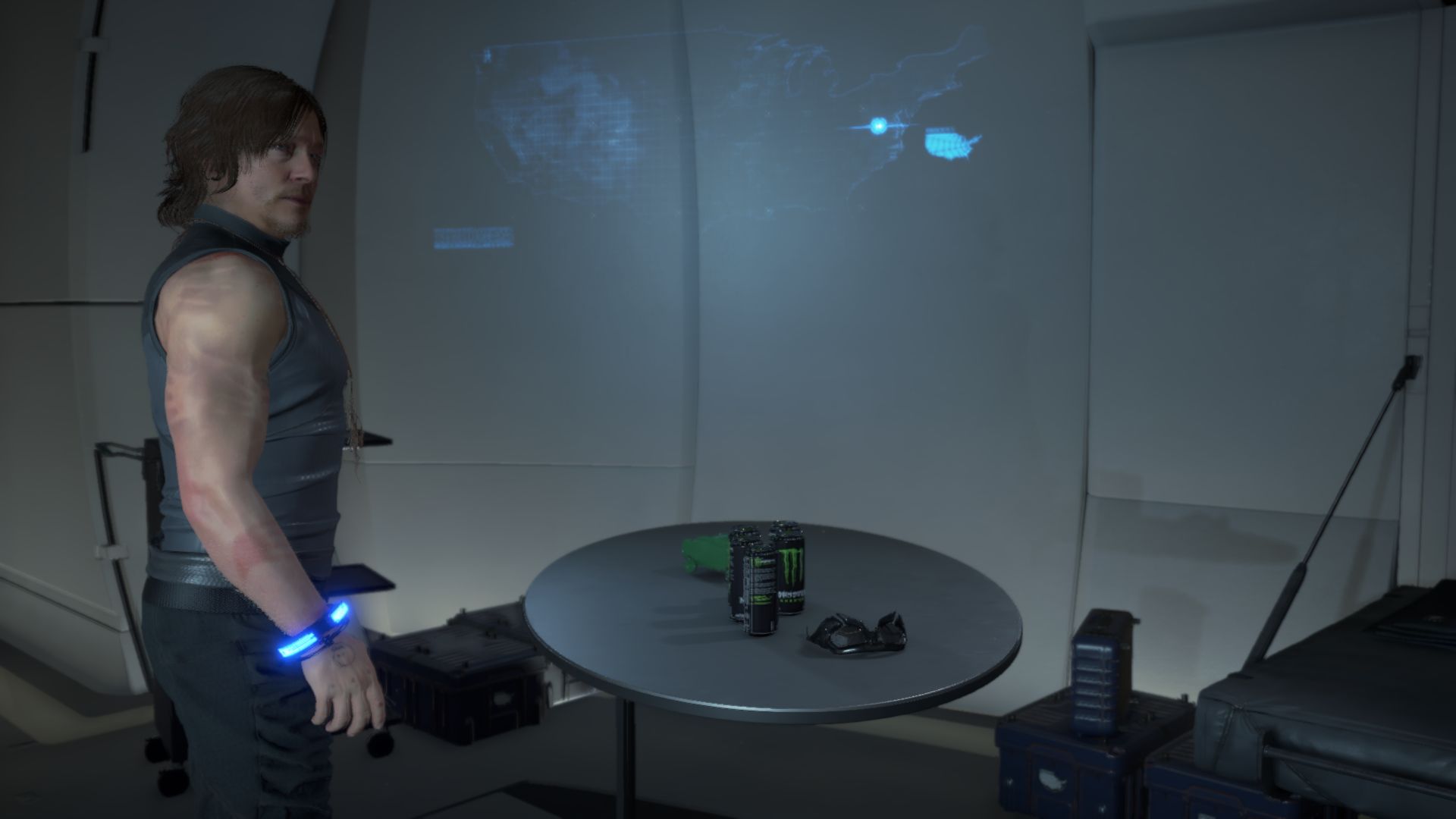 But sometimes it works! There was one moment in particular, involving an ominous rainbow and a perilous truck ride. Hearing "Son of a bitch! Rainbow!” followed by a sinister violin screech made me laugh out loud. Then the truck stalled, and I found myself sitting through ten solid seconds of silence as definitely invisible, possibly imagined monsters surrounded us. That's some effective emotional whiplash.

That tightrope is damn slim, though, and overall I'd say I'm invested while not entirely sold. The big portentous moments about life and death that appear towards the back end of the intro failed to portend. Dramatic weirdness is most impactful when dished out in small doses, because otherwise you're just left with weirdness - which again, I do like. I just think that piling gravity inversions on top of canister babies on top of red glowy gas mask men on top of lord knows how much else leeches... gravitas.

Don't get me wrong, I am all for the incidental weirdness. I enjoyed the nonchalant eating of these grubs. Again, though, there are only so many times you can be deliberately playfully incongruous before that itself stops being incongruous. 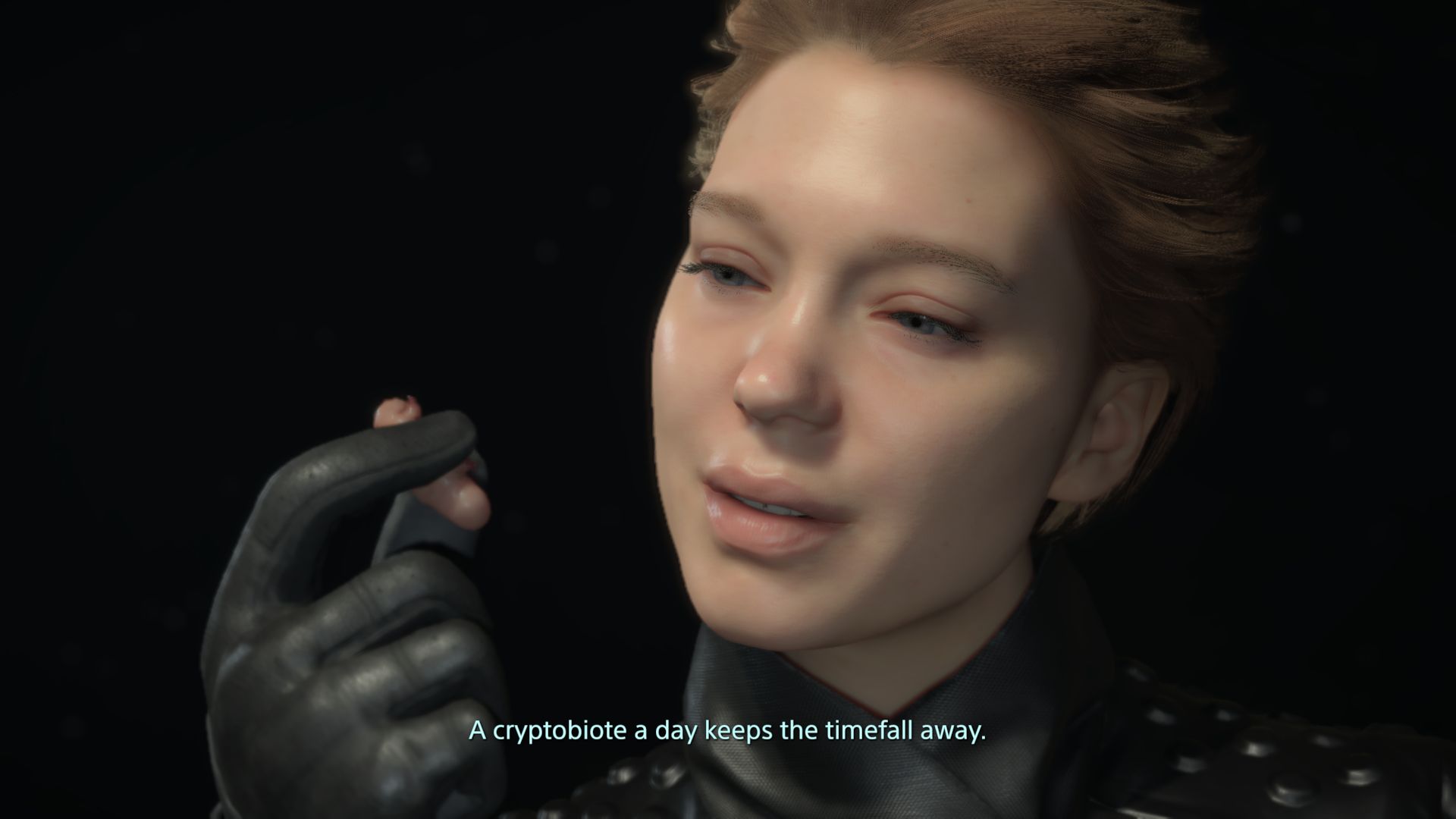 Death Stranding also makes me roll my eyes when it treats me like a child, which many of the lines do. It's the kind of blatant exposition I expect from family friendly cartoons. Most lines also have too strong a tinge of the unreal to them, with very little coming across as something that a real life human would say. You could chalk that up to unfair genre expectations, but believability matters to me. Believability gives weirdness punch.

I like that this is a world I can make very little sense of, and I'm looking forward to exploring it in earnest. But the opening has pulled the rug out from under me so many times that I've already only got one foot on it.