I have mentioned before how much I love the big buff mercenary gal of Assassin’s Creed Odyssey, Kassandra. She is a holy terror and can crush anyone who steps to her, like a toddler squeezing play dough in their fist until it all squishes out the sides between their fingers. Kassandra stands a full head taller than most regular citizens of Greece, because she is superior to them in every way.

Thus, I relished the chance to do more adventuring as Kassandra in the new DLC, The Fate Of Atlantis. This one adds a whole brand spanking new area to run about in, which is ideal because my Kassandra had long since monstered every island Ancient Greece had to offer. So off we went to the fields of Elysium.

Elysium is pretty cool. It’s one of the regions of the Ancient Greek underworld -- the nicest one, where all the heroes and best people end up. Kassandra gets there via some nonsense to do with the future and the big magic Staff Of Hermes. It might all be an illusion. I wasn’t paying attention. Anyway, all the towns are on top of cliffs, hundreds of feet in the air, and Hermes has built teleporters to instantly get up to them, which my Kassandra has shunned entirely. She climbs resolutely up the sheer rock faces, using only the strength of her will and also her giant arm muscles. She is an unstoppable flesh crab made of muscle and soft hair instead of chitinous exoskeleton and salty fibres.

Enemies are much tougher (some of them are magic statues that come to life if you’re too naughty in front of them) and fortresses are complex multi tiered affairs that push you into being much more sneaky and tactical than you have to be once you’ve out-levelled most of the main game. So I like it a lot so far. Including one thing in particular.

Elysium is very nice looking. It is always a golden, sunny afternoon there. Here are some pictures of lovely ruins and fields of flowers: 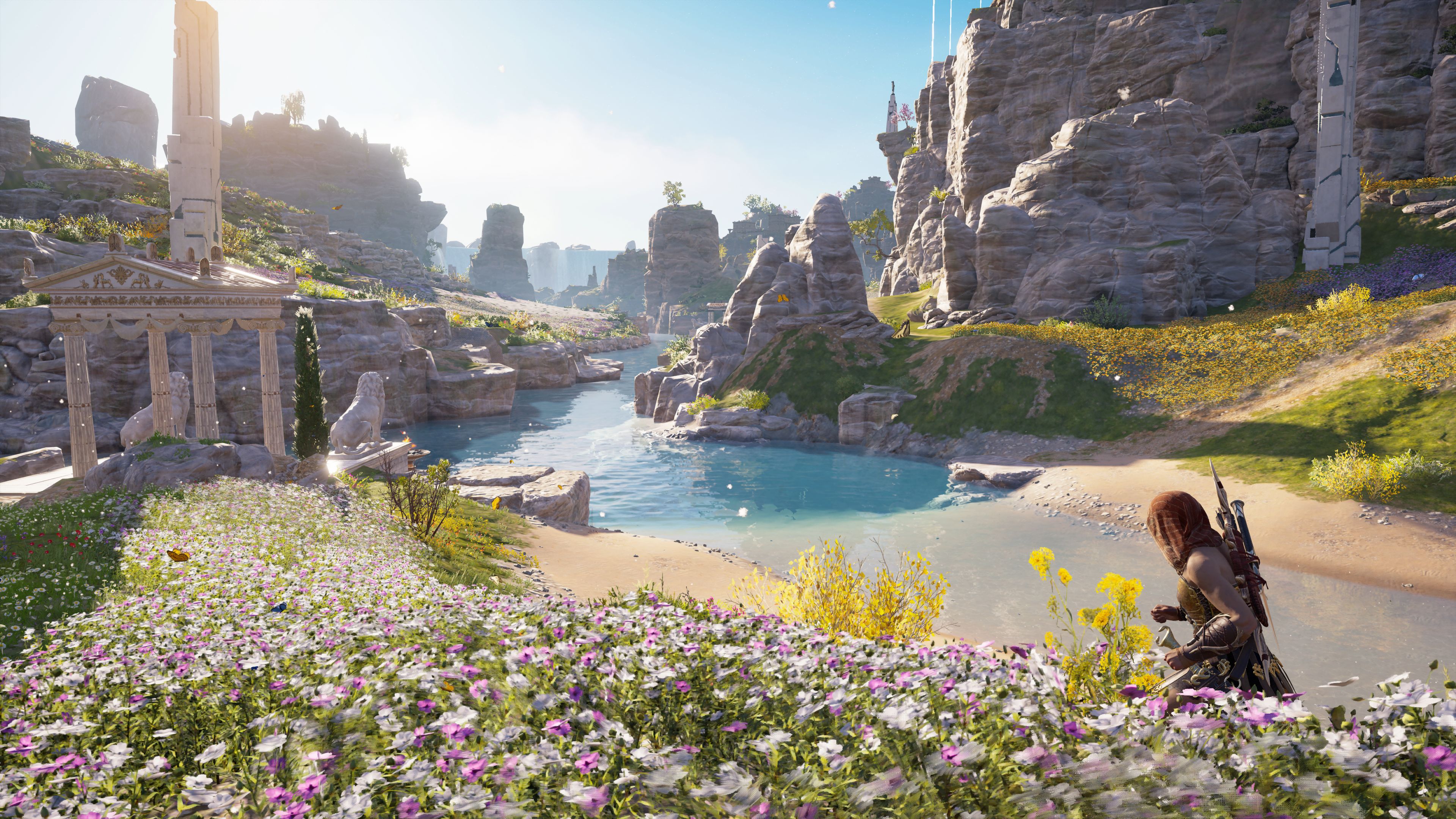 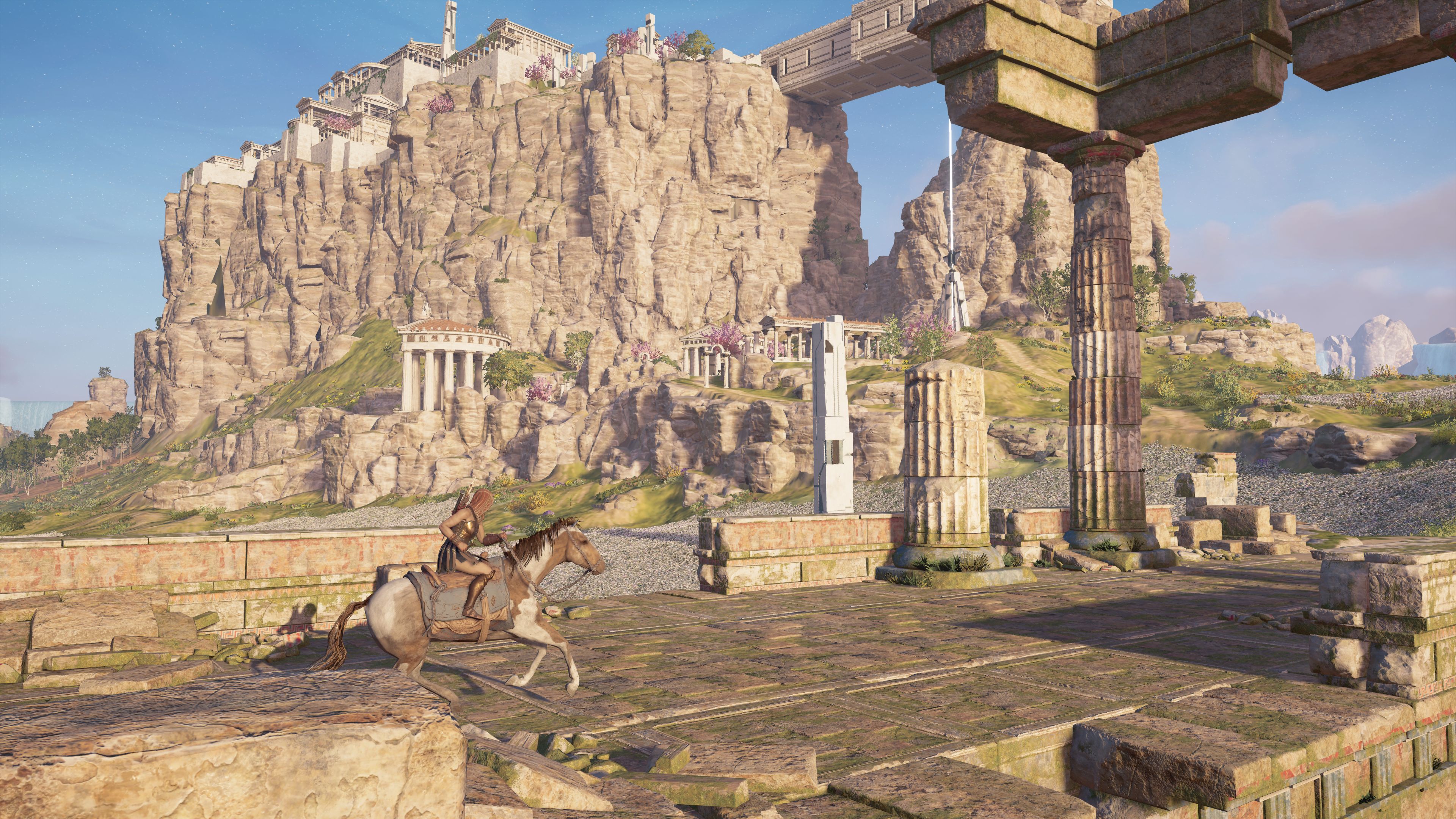 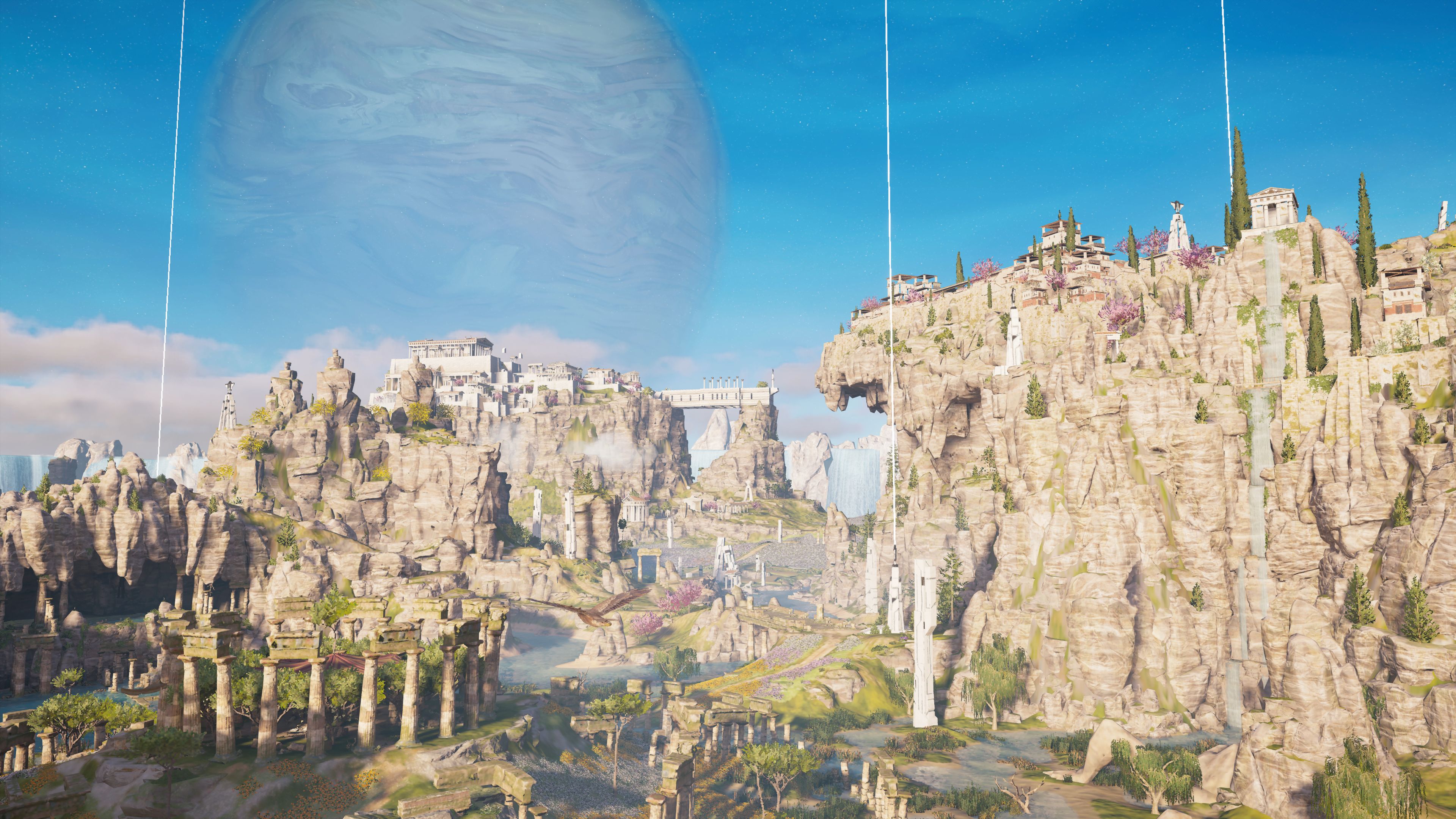 This belies the real landmarks of outstanding natural beauty in Elysium, though. See, Elysium is ruled by Persephone (she of the pomegranate seeds who has to stay in the underworld half the year because Hades can’t get over himself, YOU NEED A STEPLADDER HADES AMIRIGHT?). She wears a flower crown, and there are big statues of her all over the place. When I first pitched up in her domain, she shouted at me from an ornamental marble dais that was a hundred meters or so away from me, set a load of magic soldiers at me, and disappeared. And my mistake was to assume that she was normal sized.

The gods in Elysium, including badass witch Hekate and shitty sulky Nice Guy so who cares Hermes, are actually Isu. The Isu are the future-past magic-tech race of people in Assassin’s Creed who turned out to be our gods, or named themselves after them, I’m not sure. Imagine my shock when I later encountered the witch goddess Hekate and stood next to her. 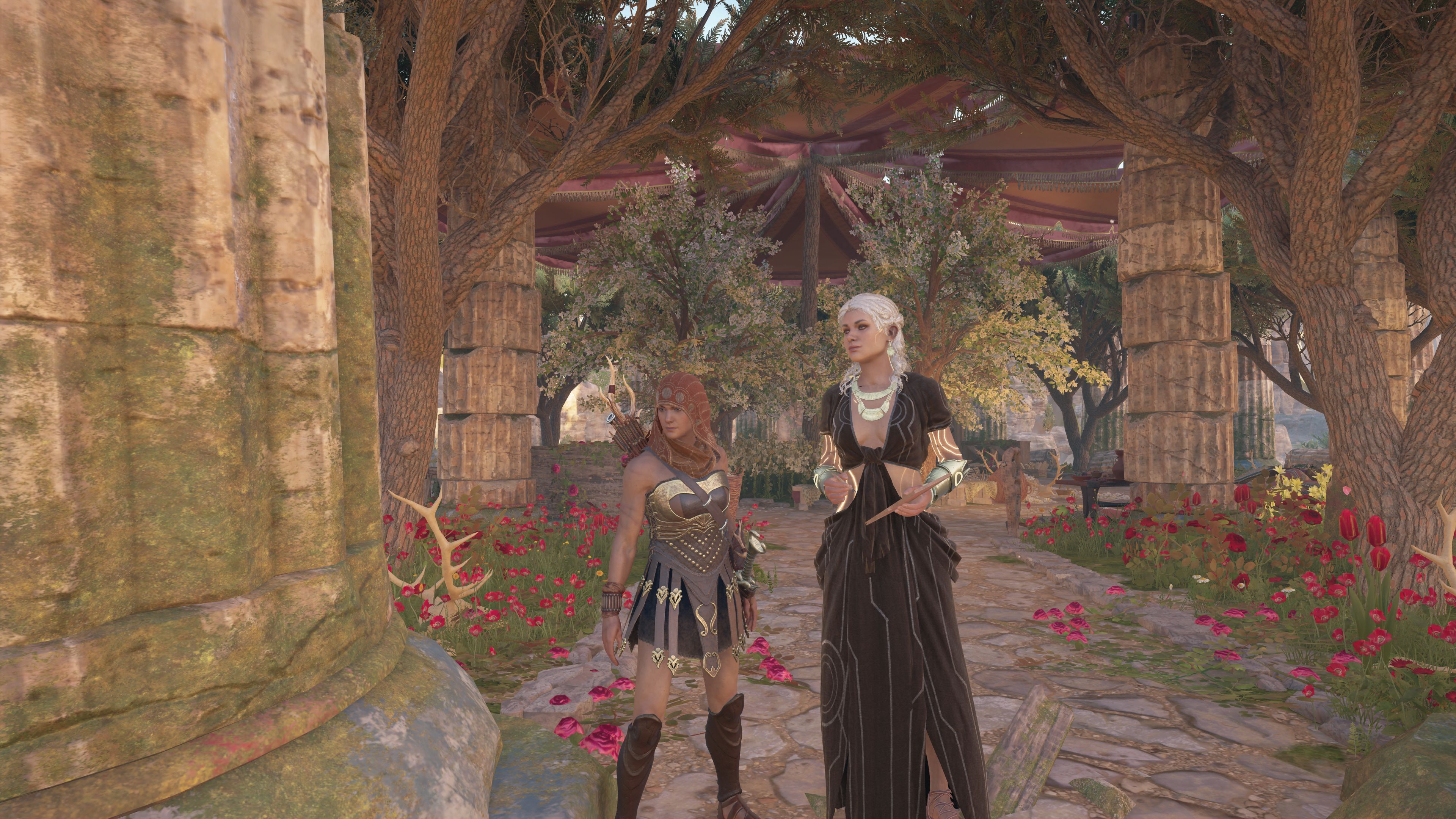 Because I pay so little attention to the overarching subplot, I had failed to notice that Isu are actually much bigger than your average Kassandra, who, as aforementioned, is much bigger than your average person. In my mind this makes Hekate and her bitchin’ knot dress about twice the size I am. Look at her! Persephone is the same! That song about being a giant woman from Steven Universe spontaneously started looping in my head!

It’s not that they’re tall. It’s like someone shift clicked on a regular person in photoshop and sized them up. I am mesmerised! This is what is really meant by the term statuesque. Of course people worshipped them! Who wouldn’t build a shrine? They’re massive and they don’t give a fuck. Which, like, y’know, do we care for the opinions of ants? I’m having trouble engaging with the plot, which is to do with overthrowing Persephone as ruler, because frankly she should be allowed to do whatever she wants. Hekate would wear heels down the club to make herself even bigger. 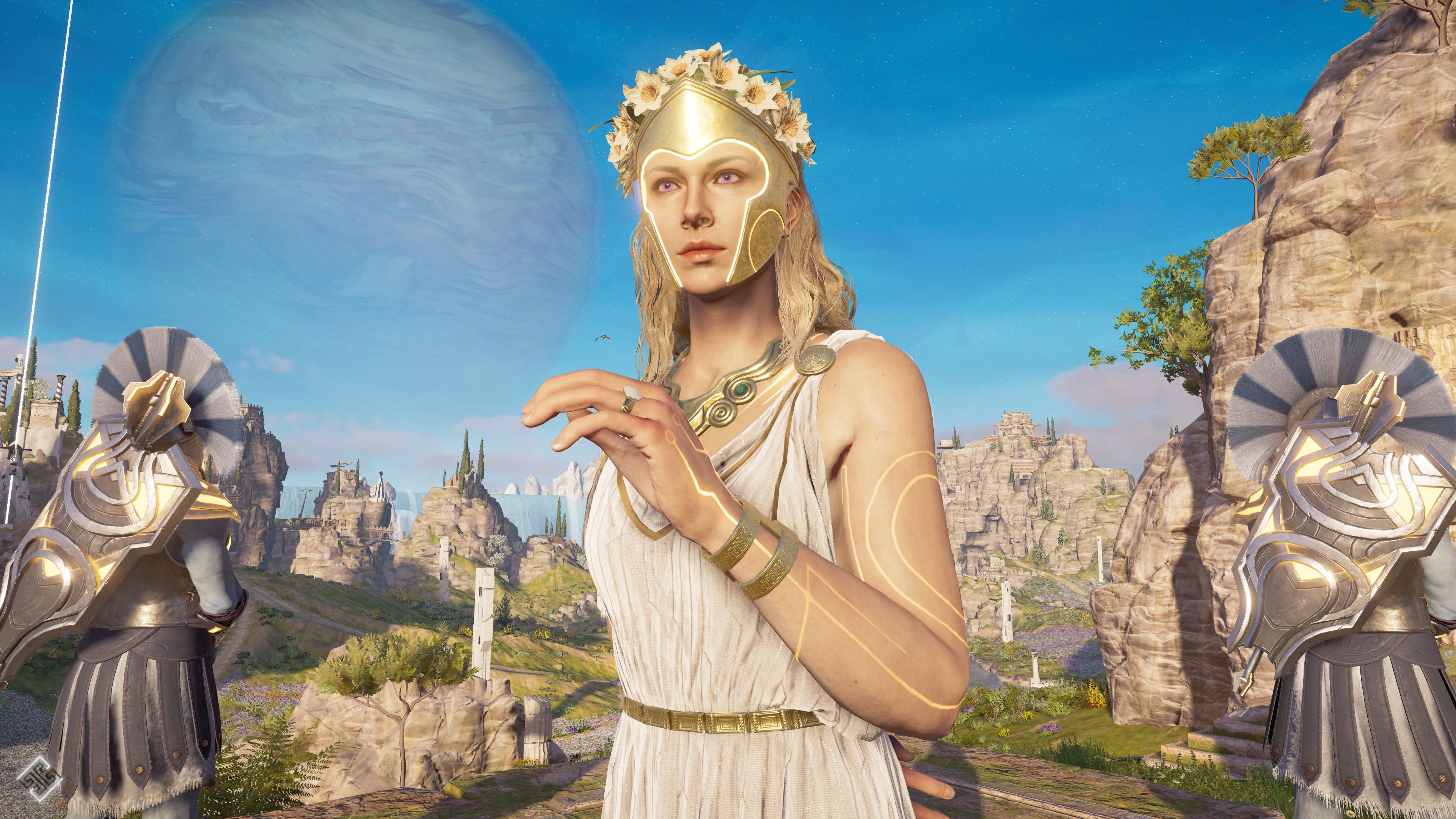 I think it is enhanced with Persephone in particular because she radiates a strong "Can I speak to the manager?" energy, like the mother of the captain of the netball team from the public school a town over from yours. Like, in another life she'd drive a Range Rover. She sends back gnocci at Zizzi's. If Persephone was sitting in front of you at the cinema, she wouldn’t squirm down in her seat to take up less room. She would demand even more chairs. And a booster seat. The attitude makes her seem even bigger than she already is. If Kassandra has to fight her, it'll be like an unstoppable force meeting an immovable object but they are both made of girl.

I hope there’s an option for the ending to be Hekate and Persphone becoming bestest friends and beating the snot out of Hermes, who is technically the same size as them but also very clearly small and insignificant by comparison. I hope every subsequent chapter of the DLC is just Kassandra visiting other realms of the underworld and meeting a succession of impressive giant women and discussing how to be terrifying.

Anyway The Fate Of Atlantis DLC is great so far.

(Spoiler: these pictures were taken from my Xbox cos I don't have the DLC on PC but I don't think the effect is lost)