Star Wars is, for me, first and foremost a video game franchise. I know there are films, I’ve seen some of them (seven of the eleven by my count), but I’m far more likely to tell you that A New Hope took place between the events of Jedi: Fallen Order and Dark Forces II than the other way around. When I see that title fade away, and the yellow letters begin to scroll, I have that warm glowy feeling of familiarity and happy memories, but they’re of the nefarious deeds of Darth Malek or the ripping yarns of Kyle Katarn, rather than Luke and his naughty daddy. (Sorry, spoilers.)

It is a peculiar relationship I’ll concede, where two of my all-time favourite games have “Star Wars” in their titles (Knights Of The Old Republic, Dark Forces), but the films wouldn’t even be thought of when making my movie list.

When I boot up the backwardly named Jedi Knight: Dark Forces II, there’s immediately a hefty dose of nostalgia. Meanie old droid 8T88, mentions of “Dark Jedi” (as opposed to Sith?), Kyle Katarn’s beard, it’s all a warm bath of teenage years. But, I was wondering, is it actually as good as I remember?

I know the original Dark Forces is. In its day it was an extraordinary game, the first FPS to introduce multi-floored levels, and the ability to look up and down - it was the big step forward from Doom that everyone forgets. And despite all those features being decidedly un-novel at this point, the game is still a complete joy to play, not least because of its sprawling open levels, letting you explore rather than be directed, and even in its 1995 primitive graphics still managing to engender the same powerful vertigo with its vast drops into icy ravines. And I know the expandalone Mysteries Of Sith is regularly cited as the best in the game series. But I’m not sure I’ve ever been back to Dark Forces II in the (sit down) 22 years since its original release. Inspired by finding Fallen Order’s light sabre combat mightily dull, I wondered whether the original glow-stick battler was ever any better.

Playing it proved the first issue. While the opening titles all played out nicely, the fantastically terrible FMV-meets-CGI cutscenes as awful as they ever were, as soon as I started trying to play I was greeted with, well, this: 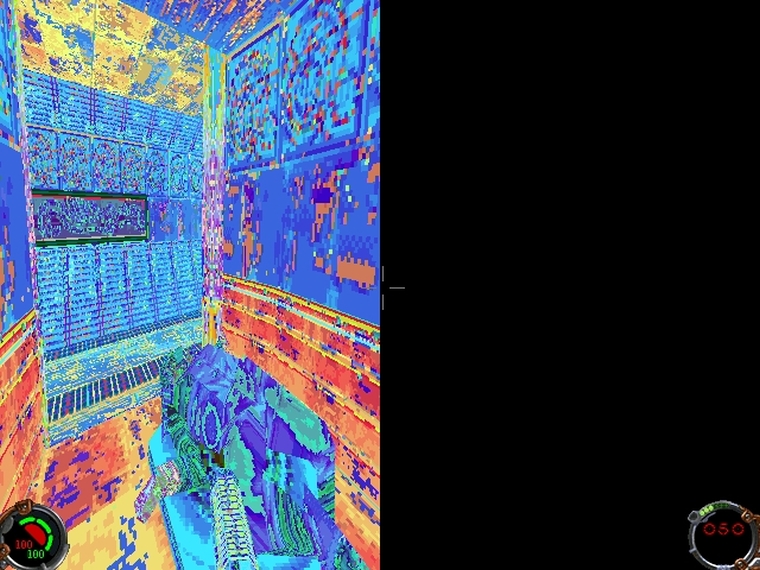 It turns out I was getting greedy - when fiddling in the options I’d seen with the “3D hardware acceleration on” checked, I could pick 3440x1440, so obviously did. But no. So of course it was time to do some research. (An act made harder by the game’s reducing every window on my PC down to a teeny tiny box each time I ran it.)

Now, I’m almost never interested in those texture upgrade packs people work on. If I’m playing a game from 1997, I want it to look like a game from 1997. The art, the pixels, they were picked on purpose, hand-crafted within the limitations of the era to achieve a design they were proud of. Smoothed out updated versions by modders are an impressive technical achievement, but they tend to demolish the texture of the game as it was conceived. I just want it to run on my ridiculously enormous monitor without breaking time and space.

After a good hour or so of battling with various patches, buying the GOG version as well, then pitting the two against each other in a battle to the death, I discovered what I needed was the most recent working patch and then to add a “dgVoodoo wrapper”. While 3440 was a dream that I’d not see fulfilled - it certainly occupied the whole super-wide monitor, but all squashed and flat and silly looking - I did eventually get it running with 3D acceleration, at a decent size. (Steam won - screenshots weren’t taking on the GOG version.) Onward! 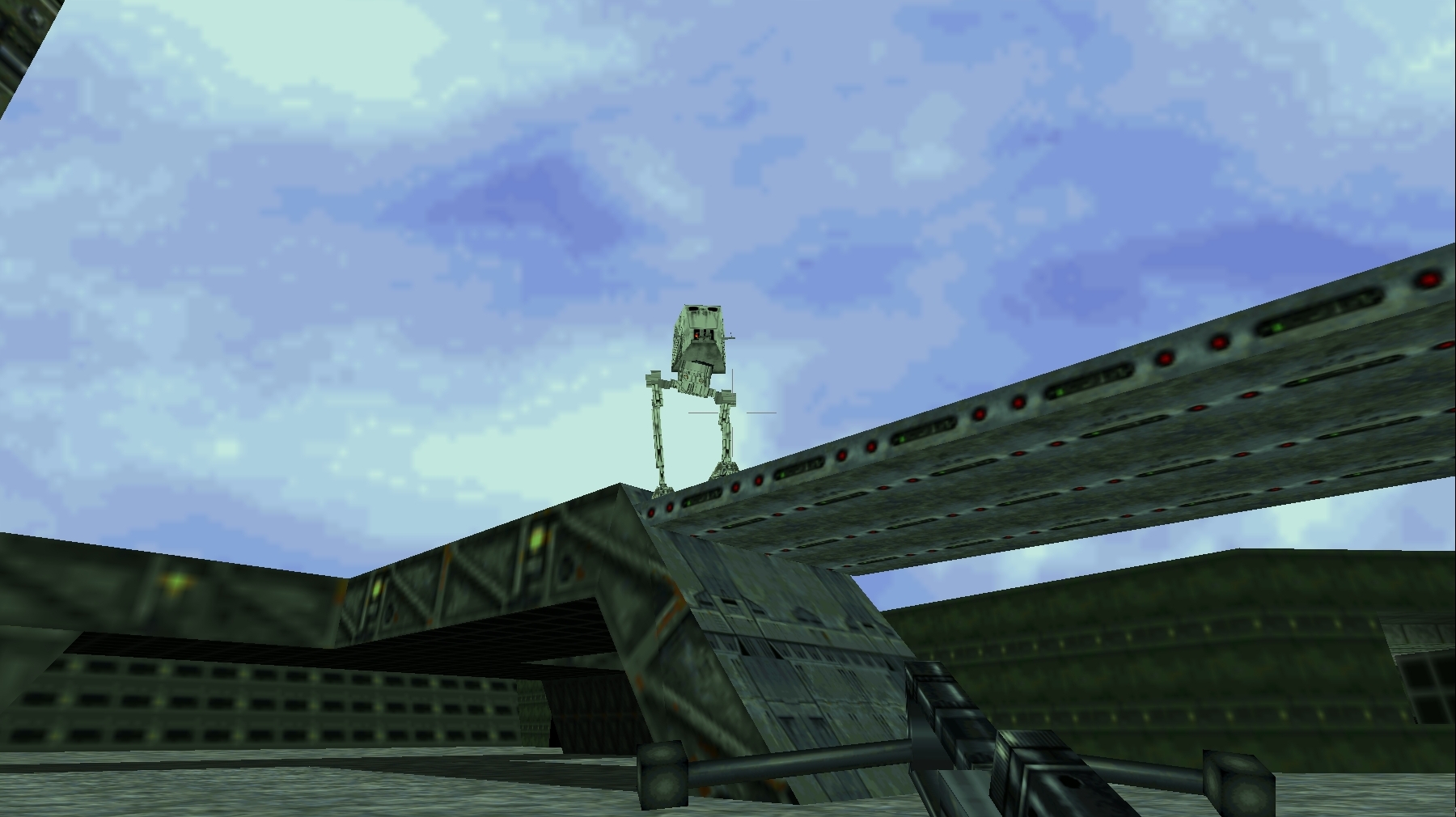 I need not repeat for you just how good LucasArts were at FPSs. It remains such a crying shame they made so few, and abandoned them so early. The company appeared badly stung by the development of Star Wars: Obi Wan, scrapped as a PC project and eventually released as a crappy third-person Xbox game. With Jedi Outcast made by Raven, the closest they got to an FPS after that was the fantastic Republic Commando, and even that had its sequel cancelled. Which is all to say that among the many, many sad stories that can be told about LucasArts fall in the late ‘90s, one is that their incredible skills at this genre were never realised on modern machines. And Jedi Knight just makes that all the sadder, because it’s immediately a brilliant shooter.

It’s also immediately rather brave. I think were it made today, or indeed made by anyone else back then, this would have been a game that opened with a light sabre warmly placed in the player’s hand. But here, continuing the story of Kyle Katarn - a contemporary of Luke & co, fighting for the Rebels elsewhere in the same time period - there are three enormous, richly detailed levels, as horizontal as vertical, packed with vast moving machinery, where you're provided with nothing more than a blaster. It feels like a statement: “Look, sure, we’re going to go Jedi powers this time, but you’re going to remember why Dark Forces was so good first. And you’re going to remember that Kyle is a badass without fancy powers.” 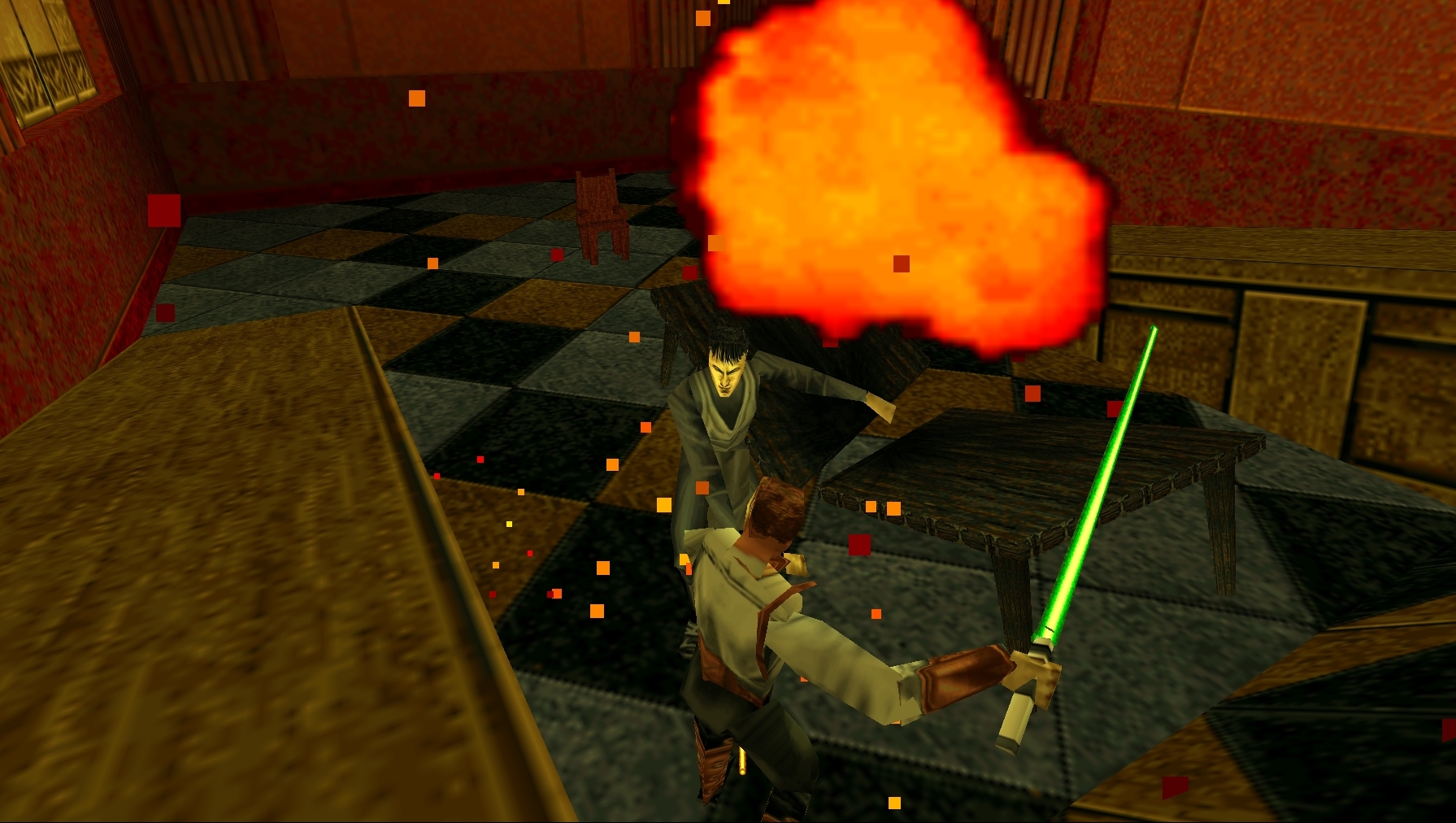 It’s still not in a rush even with them. Because, as my great-grandmother used to say, putting a light sabre in a man’s hand does not a Jedi make. Kyle’s progression from mercenary to force-wielder takes time, with new abilities drip-fed in between levels as stars are earned, spendable points to gain new Force powers. (Do we capitalise “Force”? It seems polite. And as someone who is incapable of hearing, “May the Force be with you,” without replying, “And also with you,” it seems like I should offer it the respect it deserves.)

First up is Force Run, then later Jump, followed by Pull, painstakingly added in over five or six absolutely massive levels. But at the same time, added with absolutely not fanfare whatsoever. Not even a mention. There’s a menu to add the ability, and then you need to figure out for yourself if you’re going to use it, and how. Because this, young person sat atop my knee, is a game created during the Ancient Epoch Of Manuals.

I’m so out of practice of the Old Ways that for the first two levels I had Force powers I didn’t use them. The game didn’t tell me to! There was no prompt, no enforced tutorial! And then I hit a wrong key and the icon popped up and ohhhhh yeaaahhhhhh. Because in 1997, before I’d played - perhaps while the game was installing from CD-ROM - I’d have RTFM. Pored over it, learning all the features I could expect, reading the instructions for how to use them when the time came. I’d have been ready, anticipating, relevant pages pressed open in front of me.

This completely hands off approach by the game is just so welcome. There’s no lesson in how to use the light sabre when you receive it. You just fish it out of your pocket eventually, and figure it out. And for the most part, it’s astonishingly similar to Fallen Order’s. There’s less faff, certainly, with the laser blast deflection happening automagically if you’re facing your attacker. Then you whack and chop with the mouse buttons as you’d expect. The treat is in mastering the art of boldly striding toward crowds of Stormtroopers and their friends, blasts bouncing off all over, and then catching a lull to swipe down three of the buggers at once. With no bloody parrying to worry about, you can just get on with feeling like an actual effing Jedi. (Jedi never swear.)

As powers are added into this, they don’t loudly take over, but are rather applied as optional tools in any given situation. Being able to Force Jump up to reach a bonus area, or useful vantage point, is a treat rather than an obligation. And that makes such a difference! 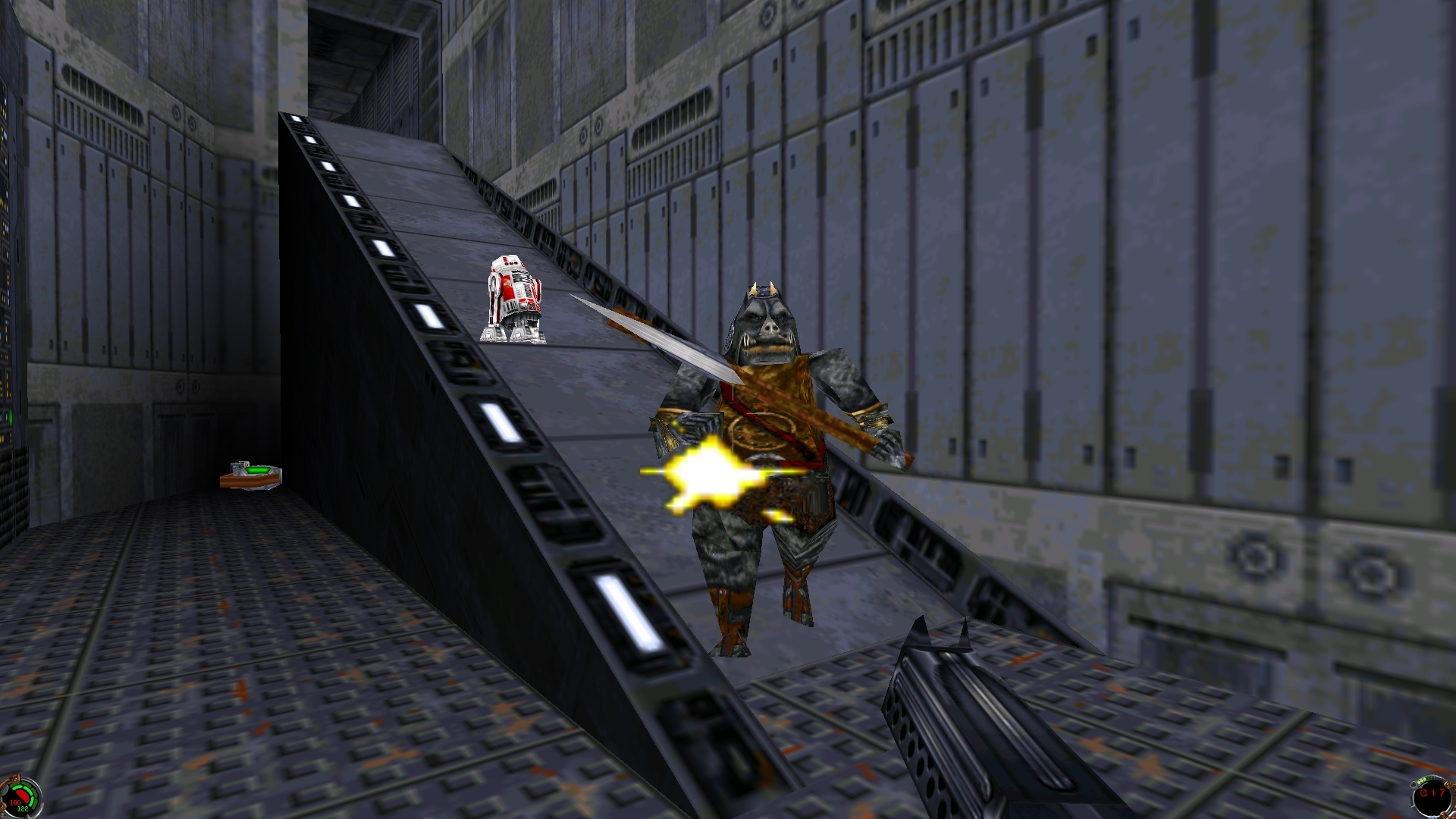 The other thing I always forget about ‘90s shooters is that they weren’t six hours long. Honestly, Jedi Knight takes six hours to get the Force stuff properly up and running. This is a game that’s finding its mighty stride by the time modern FPS games are sluggishly rolling their six hours of credits. And its early hours are all absolutely splendid, exquisitely well crafted. Playing it now feels like a luxury we’ve since been convinced we don’t deserve. “Are you sure, Jedi Knight? Really? I’m allowed this much fun and I’m not even a third of the way?”

I’m just so thrilled this is still so good, and without the need for a scrap of nostalgia. I barely remember a bit of it, occasional moments suddenly taking me back like finding an old holiday photograph. Jedi Knight is such a solidly good game, with level design modern FPSs probably wouldn’t even be able to afford to prototype. I want someone to start a YouTube channel where younger FPS players are exposed to something like this for the first time, to see their reactions, to start a damned revolution. “WHAT? WE COULD HAVE HAD THIS!” Try selling your Call Of Duty after that, The Man. 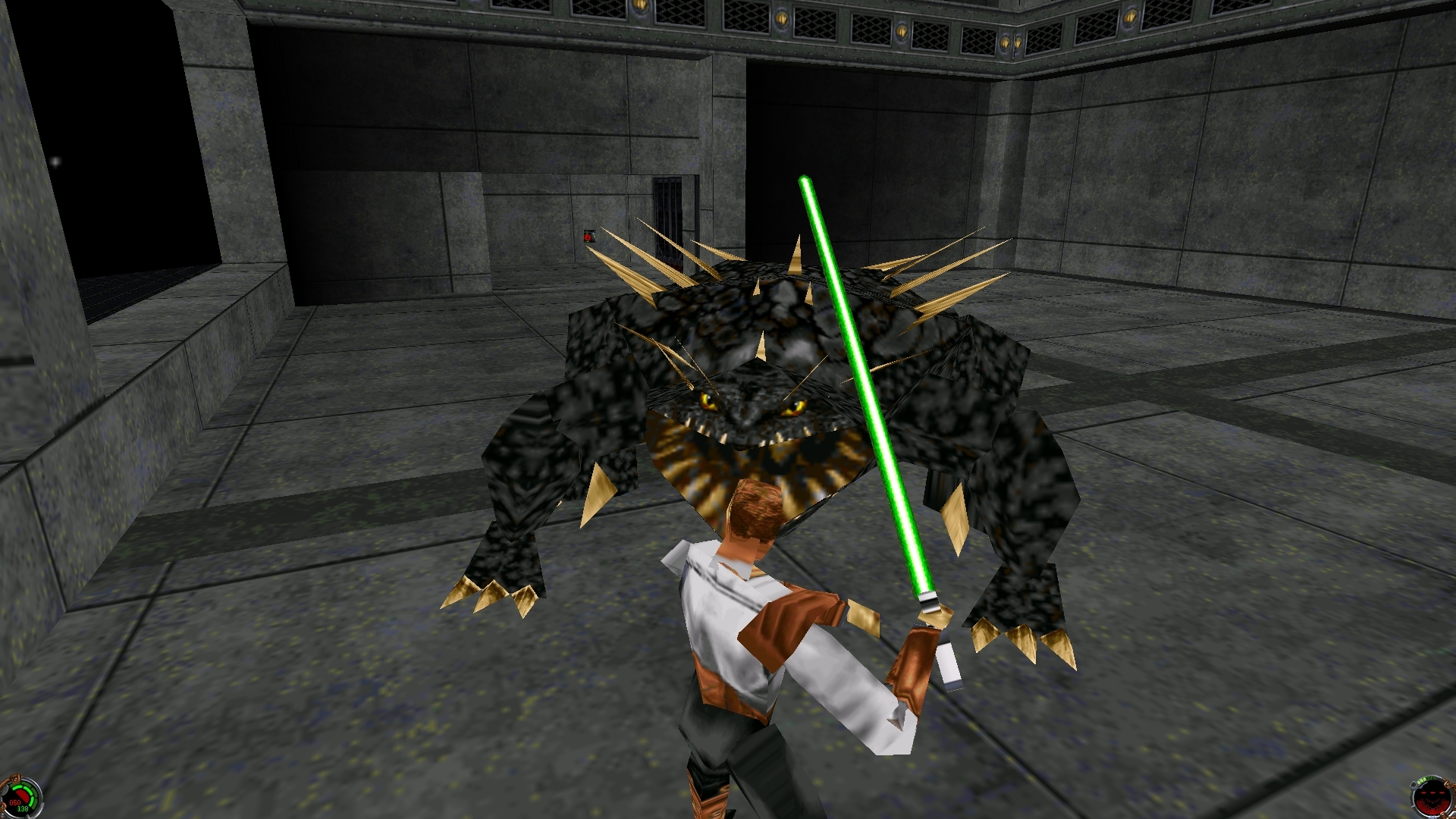 Yeah, this is the stuff. The cutscenes are absolutely terrible, the hokiest of hokey FMV acting, across the smeariest sub-Myst CG backdrops. And yet they add a frisson of movie magic, betwixt the olde worlde box-people graphics. But above all else, this is just one hell of a solid shooter.

And the light sabre? Fallen Order’s is certainly more sophisticated, but it’s also more of a ballache to wield. Frankly, it’d be ridiculous to compare the two, 22 years apart as they are, so I will: I much prefer the simplicity of Jedi Knight’s.

You sure can. But you may well want to add some tweaks.

You can get it from Steam and GOG, with pros and cons for both builds. The Steam version seemed easier to patch, but the GOG version is said to be the better port. Although perhaps most significantly, on GOG you get the amazing Mysteries Of The Sith thrown in for free.

Absolutely! I cannot stress just how good this game is. It's a revelation to play after any modern FPS single-player game, to realise just how complex and involved and beautifully laid out the genre can be.