Authenticity. Accuracy. Realism. If you’ve been following the debates around Kingdom Come: Deliverance, you'll have seen these words a lot, as well as others, like representation, racism and diversity. In the wake its release, there’s been a lot of talk about whether or not Warhorse Studios had been able to make good on their ambitions to deliver an RPG grounded in historical reality. It’s a natural question, but perhaps a better one might be: does the promise of historical accuracy make sense in the first place?

The game’s problems (and there are many) aren’t a symptom of a list of inaccuracies that could be fixed, but are rooted in the shaky, dangerous foundations on which those claims were built.

It’s important to remember that the past is never presented to us on a silver tablet and we should be wary of any version of past events which claims to be the absolute truth. History is messy and full of gaps into which we necessarily stumble. There are gaps where historical sources have been lost, discarded or destroyed in the intervening centuries. And, more metaphorically, there are those gaps produced by the collectively upheld blind spots of earlier societies. Medieval writers weren’t, for the most part, in the habit of recording the lives or circumstances of peasants, the poor, children, women, or outsiders like the Romani. What we know about the lives of these people has been pieced together by researchers trying to create a whole from puzzle pieces that were never really meant to fit together. It’s educated guesswork, and the pieces that have been handed down have been largely (de)formed by the prejudices of those that came before.

Even if we treat every historical source and piece of research as acting in good faith, there will always be contradictions and gaps. If we take into consideration deliberate lies, as well as errors and misunderstandings, the picture becomes even more confused.

Simply speaking, historians are not perfect. They're biased, and they have to be. A good historian interrogates their sources from very specific angles that necessarily exclude many other considerations, which often says as much about them and their attitudes as it does about the period they’re studying. To make things more complicated, these preconceptions change with time. Today’s trendy biases are very different from the biases of 19th century historians, who focused mostly on the deeds of ‘great men’ and, in the wake of nationalism, on such important concerns as the essential differences between, say, the German and French peoples.

Attempting to create a historically accurate game set in the Middle Ages necessitates wading through a mire of biases that has been accumulating over the span of centuries. Once that's done, any creator is going to add their personal preconceptions to the mix, whether intentionally or not. This is not a cause for the gnashing of teeth or the throwing of towels, however. Owning up to your prejudices and recognising them as such is one of the first steps to creating an interesting interpretation of the past. Challenge them, or explore their implications; either way, you have to deal with them. If, on the other hand, you’re after objective truth and look at your inherited sources and historical writings as gospel, there's a good chance you're going to perpetuate harmful and distorting biases.

Kingdom Come: Deliverance isn’t propaganda, but there’s still a semi-coherent ideological framework at its core. KCD looks at medieval society through a lens of patriarchy, and the various -isms it’s associated with: sexism, classism, and chauvinism. We’re presented a world where men were still men, where peasants and women still knew their places in society, where wise lords and knights protected their people from barbaric hordes threatening a well-ordered nation from without, and whose foreign ethnicity is conveniently marked by language and costumes. 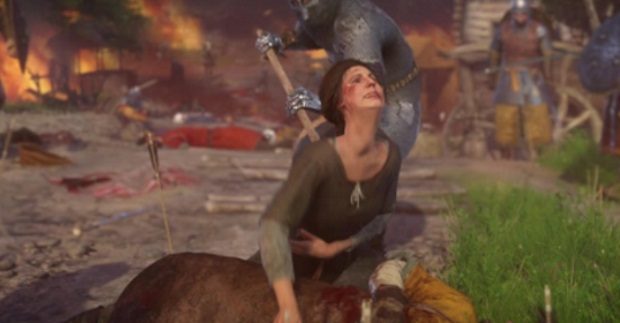 “But that’s how it was back then,” comes the familiar response to these observations. “Go read a book.” (Which book, I wonder? They rarely say.) For the sake of argument, let's assume that everything we see in this game is historically accurate. What about the things we don’t see? Of course, KCD’s interpretation of medieval Bohemia is partly the result of a great deal of research, but it is also the product of assumptions and decisions about what to include or focus on – and by extension, whether consciously or not, what to exclude. So, what does KCD believe warrants inclusion?

Right off the bat, it’s clear that KCD’s main interests are politics, war, and material culture (weapons, architecture, etc). Its claims of historical accuracy are measured almost solely against these interests. The more intangible aspects of life, such as social conduct, creativity, language, religious belief and mentality, aren't given as much attention. KCD mostly assumes that people behaved, spoke, and reasoned just like we do today: throw in a “God be with you” as the opening line of every dialogue tree, and voila, medieval conversation!

Some aspects of life are excluded entirely. There are no children, for example. Some of the biggest exclusions, however, stem from a fetishizing of the ‘typical’. Non-conformism or ‘deviancy’ is practically non-existent: there are no rebellious women, no revolutionaries, no religious sceptics on the one hand, no religious fanatics on the other, no representatives of other cultures apart from murderous Cumans, and really no misfits of any kind that aren’t common thugs. Despite the backstory of war, slaughter, and displacement, Bohemia is shown as a place of homogenous equilibrium and conformity, where everyone, peasant to lord, knows their place and is content with it. In those few cases where we get to meet someone atypical, like the brawling, drinking, and decidedly un-celibate priest Godwin or the three ‘witches’ of Uzhiz who crop up in a ludicrously ahistorical side quest, their deviancy is played wholly for laughs. 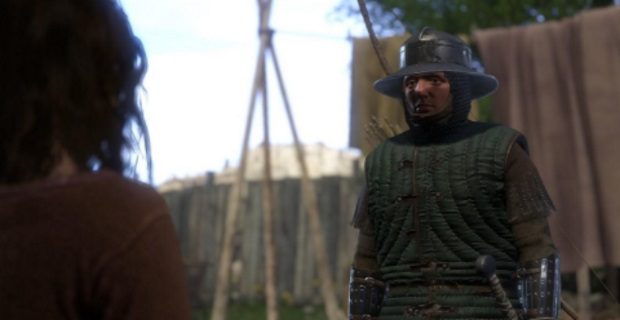 This image of a society that is essentially content with its own stasis not only contradicts the game's storyline - which is about the rise of a peasant - but also the historical research. It seems especially strange in the context of the looming Hussite Wars (1419-1434), during which the grievances of the desperate poor exploded in a bloody revolt against clerics and nobles alike. The teachings of Jan Hus, a theologian whose execution in 1415 helped spark these wars, are mentioned here and there in the game in connection with a vague anti-clericalism (common in the Late Middle Ages). In KCD this distrust of priests is shown as something peasants and nobles have in common. The resentments that would soon tear Bohemia apart are paradoxically portrayed as a potential national unifier.

The Hussite Wars were a time of extreme dissent, religious heterodoxy, and fanaticism. In his classic book “The Pursuit of the Millennium” (1957), historian Norman Cohn describes the ideology of certain extremist groups like the Taborites as “anarcho-communism”. Cohn recounts how many peasants sold all their belongings or even burnt their homes to the ground to join these groups, which forbade individual property. Taking what they needed by force, they lived in constant anticipation of the imminent Second Coming of Christ. An even more extreme group, the so-called Adamites “held that God dwelt in the Saints of the Last Days, that is, in themselves; and that that made them superior to Christ.” 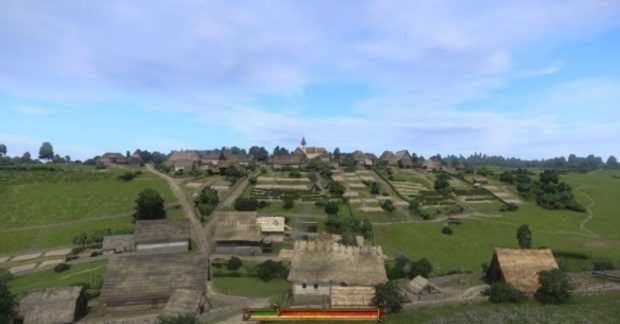 There’s nothing in the sober, too-familiar behaviour of KCD’s peasants to suggest that Bohemia is a powder keg waiting to blow up in just a few years. In its pursuit of an ‘authentic’ medieval world, Warhorse has produced a toothless interpretation, removing the noise, the strangeness, everything that might give you pause or challenge popular preconceptions, in favour of a trite vision of an idealised national past.

We can partly blame the game’s ideology for these failures, but there are other reasons as well. One of them might be the uncritical assumption that we can use cookie-cutter RPG tropes and systems – KCD plays like TES: Oblivion for the most part – as groundwork for an authentic historical recreation. Apart from being associated with D&D and other sword 'n' sorcery scenarios, there’s nothing about typical RPG systems that makes them ‘medieval’ in any meaningful sense. The painfully clichéd story of an ordinary guy seeking revenge after his parents’ murder doesn’t help either. Of course, there’s nothing wrong with exploring various aspects of history through the lens of RPGs and their tropes, but are we to believe that, after removing the dragons from Skyrim, what we are left with is a realistic simulation of the Middle Ages? KCD is essentially like Westworld: a thin veneer of historical ‘realism’ covering up what is really a superficial theme park that exists to gratify the whims of its visitors.

An equally problematic modern imposition, however, might be the idea of realism itself. Or rather, the idea that realism is synonymous with historical authenticity. Our modern ideas of realism would probably have been entirely unintelligible to people living in medieval times, who held beliefs and ideas that seem utterly alien to us today, but that were absolutely ‘real’ to them. Those Bohemian peasants burning down their homes in religious ecstasy probably would not have subscribed to our rationalist, materialistic world view. We are intended to experience this medieval world not as a time traveller, but through the eyes of an authentically medieval ‘average Joe’, but the fact that we are able to slip into Henry’s skin without any friction or culture shock should tell you enough. This doesn’t mean that we shouldn’t be allowed to look at past societies from a modern understanding of the world, but any game that unthinkingly embraces realism as a shortcut to an authentic ‘medieval experience’ will likely end up distorting the past.

The past is more than an accumulation of facts, and filling a world with period-accurate weaponry, recreations of castles and allusions to historical events doesn’t equate to historical authenticity. KCD sees its own modern biases reflected in a past age because it plants them there, as all historical appraisal or recreation must to an extent. Here, that is taken one step further. KCD sets out to celebrate the past, but ironically distorts its idealised object. The dream of an objective, accurate recreation of the past will always be a fool’s errand, and in pursuing it, Warhorse have created another fantasy game. One without dragons, but a fantasy nonetheless.