Riot’s freshly announced card game Legends Of Runeterra just finished its first testing period. Though I had some hands on with it at a preview event, it wasn’t an especially natural setting, with all the cards unlocked and a narrow pool of opponents, so I came back to investigate the Preview Patch event to see how well it stands up in its first tentative steps into the wild. And to pet some more poros.

Legends Of Runeterra, in case you missed it, is a League Of Legends universe card game that centres around some of the familiar champions. These cards are the centre point of your decks, with powerful abilities and the chance to level up if certain events occur. You fill out the deck with additional cards (other characters and spells) and then take it into the battlefield, attempting to knock your opponent’s nexus down from 20 health to zero before they can do the same to you.

Some parts of the game are still difficult to assess. Runeterra’s marketing has made a show of its economy, which doesn’t allow players to spend unlimited money in order to get all of the cards. In the preview patch, the rewards for simply playing felt generous, a new chest popping open after every few games, but we were also all given an abundance of wildcards, which can be swapped for any playable card that matches their rarity. The extras were theoretically so that players could experiment with a wide variety of the cards they wanted to try while in this testing period.

In reality, it meant that anyone could beeline making the specific deck that they wanted. For a large percentage of players, this was a set combining cards with the barrier ability and the challenger ability. Barrier prevents characters from taking damage, and challenger allows them to select which of your opponents cards you’re crashing them into, so it’s a powerful combination for keeping the game under your control. You can top the whole thing off with the champion Fiora, who automatically wins the game after she’s killed four enemies even if the opponent’s nexus is totally healthy.

It is a powerful deck, but its prevalence likely comes from popular Twitch streamer and YouTuber Jeremy “DisguisedToast” Wang. He was at the top of Twitch for most of the preview period and his YouTube video about the deck is one of the most viewed on Runeterra by virtue of his popularity and early prominence in the game. If you search for “best Legends Of Runeterra decks,” which people surely do, this is what you will find. 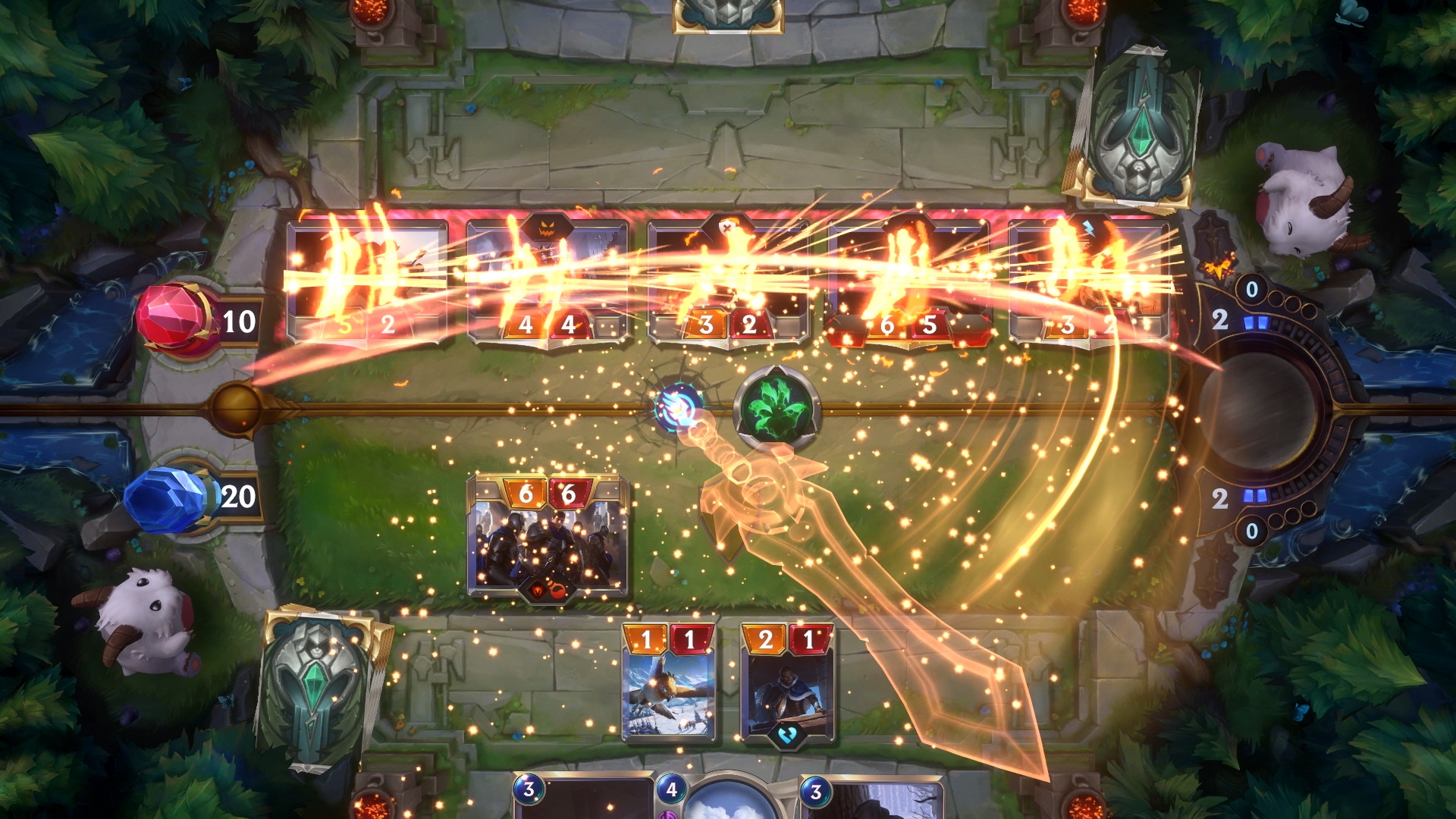 This is a hurdle for Riot. At the preview event, some of the developers said that one of their major focuses was not having a "solved" meta, where players believe they know exactly what they should be playing for best results. But that requires player cooperation as much as any kind of card balance. And what a huge number of people want, even when it’s an experimental beta lasting a few days with no actual competitive ladder and they are actively encouraged to create and experiment with a number of decks, is to play what they are told has the highest win rate.

This may be somewhat offset by the full game’s slower card unlocks. If you simply can’t make this barrier based deck, you might be more willing to experiment. However, it seems to me that players will instead be even more cautious about spending the limited money they can, leading to even less variety in the pool. Time will tell.

The barrier deck’s power also demonstrates the importance of having control over the board at all times. I said in my hands-on that it felt like if one person got ahead early in the game, they would win with the other being able to do very little to swing things back in their favour. This remains true, and with abilities like challenger and barrier, a player can force the board into the position they want with even less chance for their opponent to respond. 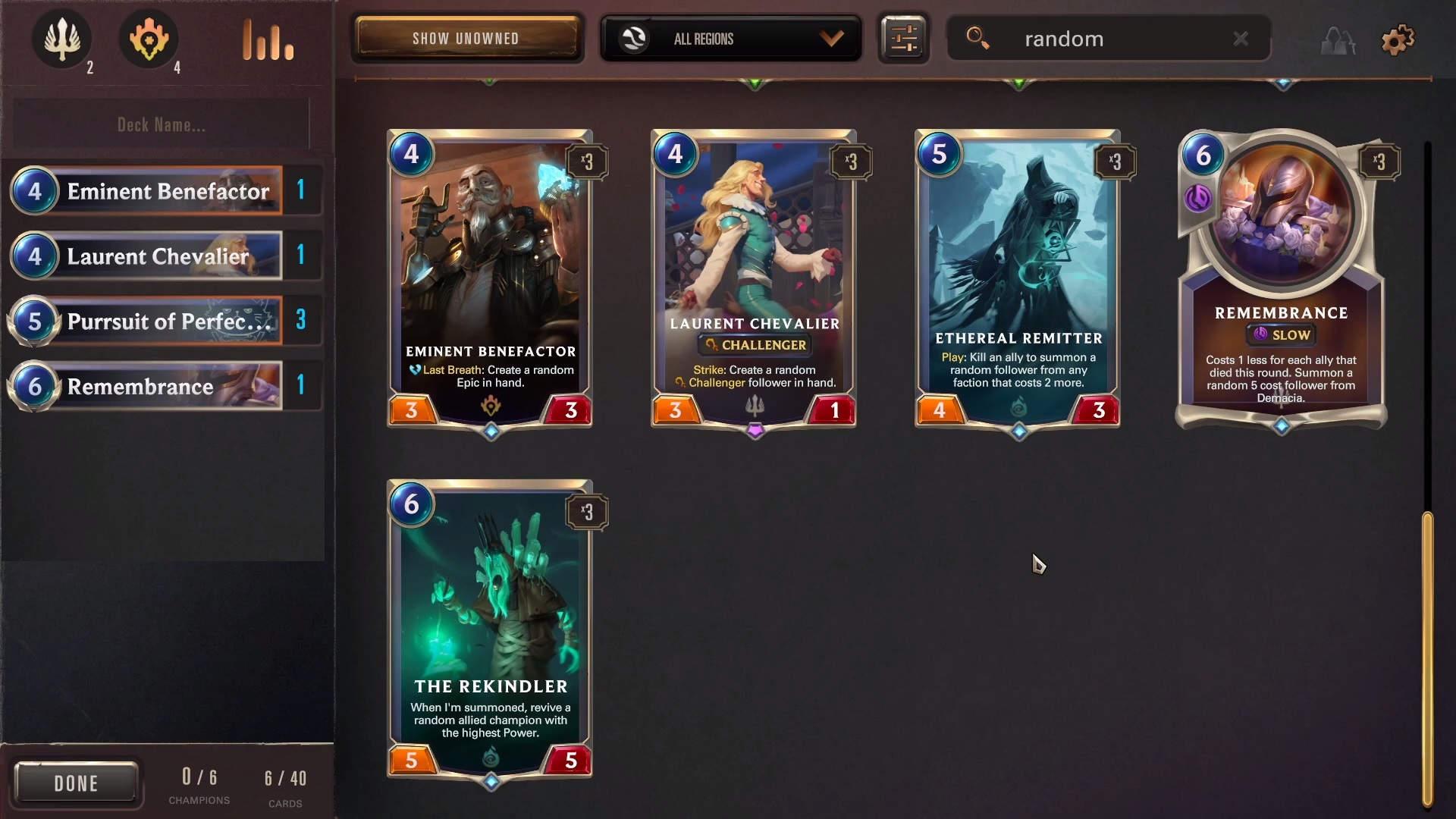 The ability to react is supposed to be one of Runeterra’s strengths. The active round system means that you can almost always play a card after your opponent has, theoretically giving the game more flexibility and strategy. Sometimes this is true; Runeterra feels like it takes a lot more paying attention to in an average game than, say, Hearthstone.

But take the simple three-mana-cost spell “Deny.” This will undo any slow spell or ability your opponent has prepared. If you play it, it feels great. If your opponent plays it, it feels terrible. That’s just how this goes. Someone always gets the last word. The active round system simply reverses who it is.

The active round system also complicates the game in ways that aren’t always about “depth of gameplay” for more experienced players. There have to be elements that can’t be countered to prevent an endless stalemate, so you get things like three speeds of spell. That becomes confusing. I also never figured out how the quick attack mechanism works, despite thinking I had several times. Yes, all of this will come with more familiarity with the game, but the steep learning curve may discourage some either immediately or after they lose many games to the combination of mistakes and the inability to come back from behind.

So far I’ve mostly been sceptical of how well Runeterra lives up to the major design points they’re flaunting, which is a shame because I actually really enjoyed playing it. I often found myself doing the thing where you say “okay, one more game,” and then accidentally queue another right after that. It was fun to theorycraft and chat design with friends who are coming from Hearthstone or Magic or League Of Legends. The cards make this great, heavy shuffling sound that’s so much more satisfying than paper would be. There’s one card called A Lonely Poro who is just a sad ball of fluff on a cold stack of rocks, and then when you summon another poro to keep them company they transform into A Joyous Poro which has exactly the same stats but art of a very happy ball of fluff. It’s great.

The next preview patch begins on November 14th, and will have some "new mechanics". Then comes a closed beta early next year, with full launch expected some time after Q1 of 2020.